ABSTRACT: A simple, sensitive, and rapid Liquid Chromatography-Mass Spectroscopy method was developed and validated for the quantification of Isoproterenol in human plasma using Dobutamine as an internal standard. The method utilized simple liquid-liquid extraction using a mixture of diethyl ether and dichloromethane for the sample preparation involved prior to LCMS analysis. The analytes were chromatographed on Prontosil ODS C18 Column with isocratic elution using methanol, Acetonitrile and Tri ethyl-amine in the ratio of 60:25:15 (v/v) at pH 6.3 as the mobile phase at a flow rate of 0.9 mL/min and the UV detector response of the column eluents were recorded at a wavelength of 248 nm. Quantification was performed in multiple-reaction-monitoring mode with the ion transitions m/z 212.19 → 135.21 for Isoproterenol, m/z 302.19 → 107.05 for Dobutamine. Good linearity was obtained in the range of 0.50–300 ng/mL (r2 = 0.999). The method was fully validated with accuracy, precision, matrix effects, recovery and stability. The results of the stability study confirm that the method was found to be stable. The validated data have met the acceptance criteria in FDA guidelines. This study could be readily applied in therapeutic drug monitoring of Isoproterenol in patients receiving such drug combinations.

IPTN has unwanted side effects on cardiac and metabolic functions, central nervous system, and motility of the gastrointestinal tract 4. Limited experience with isoprenaline (Isoproterenol) does not show adverse effects on embryonic and fetal development 5.

The drug IPTN is available as several brands in the market and is widely used for the treatment of bradycardia and heart block. But in the literature, only one analytical HPLC method for the estimation of IPTN in pharmaceutical formulations 6, one HPLC method for the synthesis and characterization of IPTN and its process impurities 7 were reported. Hence, the present work is aimed to develop a validated HPLC tandem mass spectrophotometer method for the quantification of IPTN in spiked human plasma. In the analysis of IPTN Fig. 1A in spiked plasma, a similar class of drug Dobutamine Fig. 1B was used as an internal standard (IS). 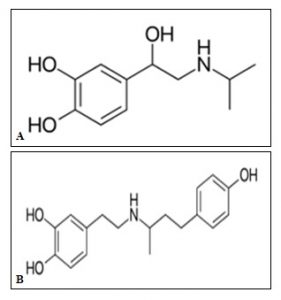 Chemicals and Materials: Reference standards of IPTN (99.21%) and IS (99.17%) were obtained from Samarth Pharma Private Limited. (Mumbai, India). HPLC-grade methanol and acetonitrile were procured from Merck chemicals, Mumbai. Water used in the study was prepared from a Milli-Q water purification system from Millipore (Bangalore, India). Blank human plasma in K3EDTA was obtained from a local diagnostic center, Guntur, and was stored at -20 °C until use.

Extraction of Drug from Plasma: A simple liquid-liquid extraction was used for the extraction of IS and IPTN from the plasma matrix. Prior to the analysis, the freeze and thaw plasma matrix were stored at -20 °C. In the liquid-liquid extraction process, 100 μl of plasma, 100 μl aliquot of working standard solution of IPTN and IS  was added in polypropylene centrifuge tubes and then 600 μl of Diethyl ether and 400 μl of dichloromethane were added. Then tubes were centrifuged for 10 min at 3000 rpm. The clear supernatant layer was transferred into another conical glass tube, and the organic layer was completely evaporated at room temperature. Then it was reconstructed using the mobile phase. The solution was used for the analytical method development and validation study.

Preparation of Calibration Solutions: 10 mg each of standard drug IPTN and IS were weighed and dissolved in 10 mL of methanol separately in a 10 ml volumetric flask. A standard stock solution of 1000 µg/mL was obtained. Required calibration concentrations of IPTN and 100 µg/mL of IS were prepared separately.

Method Development: Different compositions of the mobile phase, with different organic and pH modifiers, were studied for the separation and analysis of IPTN and IS. The separation was carried on different configurations of stationary phases, and eluents were recorded using a UV detector coupled with a mass spectrophotometer. The conditions that produce valid system suitability were studied for validation.

Method Validation: Method validation for the analysis of IPTN in the presence of IS in human plasma was done following the USFDA guidelines 8. The method was validated for selectivity, interference check, carryover, linearity, precision and accuracy, reinjection reproducibility, recovery, ion suppression/enhancement, matrix effect, stability, dilution integrity, and ruggedness.

Test for selectivity was carried out in 10 different batches of blank human plasma, including haemolysed & lipemic plasma collected with K3EDTA as an anticoagulant. From each of the batch, two replicates each of 100 µL was spiked with 100 µL of methanol and deionized water (50:50, v/v). In the first set, the blank human plasma was directly injected after extraction (without analyte and IS), while the other set was spiked with only IS before. Further, one system suitability sample at PSCC - 10 concentration and two replicates of LLOQ concentration (PSCC-1) were prepared by spiking 100 µL blank human plasma with 100 µL of aqueous standards of IPTN and IS, respectively. The acceptance criterion requires that at least 90% of selectivity samples should be free from any interference at the retention time of analyte and IS.

For determining the accuracy and precision, replicate analysis of plasma samples of analytes was performed on the same day for intraday and three different days for inter-day precision and accuracy. The run consisted of a calibration curve and six replicates of LQC, MQC and HQC samples. The deviation at each concentration level from the nominal concentration was expected to be within ±15%.

The stability of the bioanalytical method developed was evaluated by measuring the area response of stability samples against freshly prepared comparison standards at LQC, MQC, and HQC levels. Stock solutions of IPTN and IS were checked for short term stability at room temperature (25 °C) and long term (benchtop) stability at 2-8 °C. Freeze-thaw stability was studied after three freeze, and thaw cycles of plasma matrix spiked with IPTN and IS at LQC, MQC and HQC levels. The CV (%) and accuracy (%) should be within ±15 %, and also, at least 2/3 quality control samples should meet the criteria of ±15% of nominal concentration is the acceptance criteria for the stability studies.

The standard drug IPTN is having polar groups in the molecular structure that gives good mass spectrometric response in the negative mode. The molecule IPTN contains one basic and three acidic functional groups in the molecular structure with pKa of 9.81 (Strongly Acidic) and 8.96 (Strongly Basic). During the method development stage, the mass spectra of IPTN and IS was analyzed in ESI, and APCI (Atmospheric Pressure Chemical Ionization) by direct infusion of 50ng/mL solution of the analytes and the results confirm that ESI provided better ionization efficiency than APCI  for both the analytes and hence further study was carried in ESI mode. 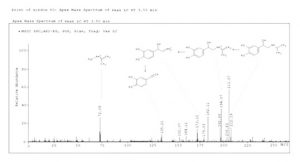 Another important observation was that a higher proportion (>75%) of organic diluents was necessary for the optimum resolution of the drugs. Both the peaks observed for IPTN and IS were satisfactorily resolved (Resolution factor ≥2) on all columns studied using Methanol, Acetonitrile and Triethylamine in the ratio of 60:25:15 (v/v) at pH 6.3 as the mobile phase at a flow rate of 0.9 mL/min and the UV detector response of the column eluents were recorded at a wavelength of 248 nm. The peak area response was not adequate on Hypersil Gold C18, and the peak shapes were not acceptable with Gemini C18 column. Nevertheless, the best chromatographic conditions were achieved on Prontosil ODS C18 Column (250 × 4.6 mm, 5μm) with an adequate response, resolution (Resolution factor ≥2), symmetric peak shape, baseline separation within 2.0 min Fig. 3. The retention time of IPTN and IS were found to be 3.5 and 4.6 min, respectively. The use of labeled internal standards that had identical chromatographic behavior helped to achieve acceptable method performance. 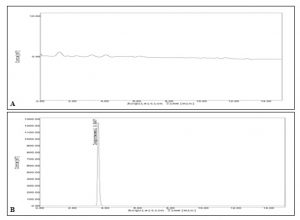 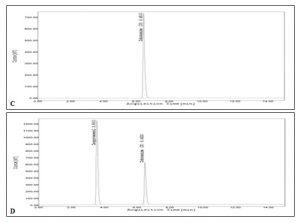 The plasma spiked calibration curve for peak area ratio of IPTN and IS against the IPTN concentration prepared showed a linear relationship over a concentration range of 0.5-300 ng/mL. The regression equation for IPTN in the developed method was found to be y = 0.010x + 0.085, with a correlation coefficient (r2) of 0.999 indicates the good linearity of the method. The results of the linearity study of IPTN in the developed method were given in Table 1, and the calibration curve was shown in Fig. 4. 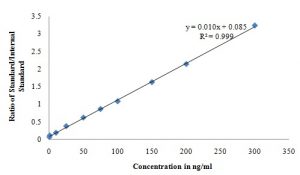 TABLE 1: CALIBRATION CURVE RESULTS OF IPTN IN THE DEVELOPED METHOD

Recovery and Matrix Effect: The absolute recovery IPTN and IS in the developed method was determined by comparing the peak area responses of QC samples (LQC, MQC, and HQC, n = 6) extracted in spiked plasma with corresponding standard concentrations prepared in reconstitution solvents. The % recovery was found to be 89.082, 93.431, and 84.80 for HQC, MQC, and LQC, respectively. The high recovery observed for both standard and IS and the % recovery of more than 85% and less than

The results of the three stability studies Table 4 confirms that the method was found to be stable and is suitable for the analysis of IPTN in biological samples.

CONCLUSION: A simple and novel LCMS method was developed for the identification and quantification of IPTN in spiked human plasma samples. The method is applicable for the high throughput bio-analysis of IPTN owing to a run time of 15 min per sample.

The assay performance studies like linearity, accuracy, precision, and recovery were satisfactory for routine pharmacokinetic applications. Hence, the current LCMS method provides a valuable tool to improve the efficacy and safety of IPTN therapy.

ACKNOWLEDGEMENT: I am thankful for my authorities concerned for the permission accorded and coauthors for their valuable suggestions and guidance in carrying out this work.

CONFLICTS OF INTEREST: I declare that to the best of my knowledge and belief, neither my coauthors nor I have any interests which might conflict.