ABSTRACT: A reversed-phase-liquid chromatographic (RP-HPLC) method was developed for the determination of Metronidazole (MTZ) and Ciprofloxacin HCl (CPX) in their bulk drug and marketed formulations. The separation was carried out using a mobile phase of 25mM Potassium dihydrgen phosphate buffer of pH 3.0 consisting of 0.15%v/v Triethylamine, 0.1% Phosphoric acid  and Methanol in the ratio of( 60:40v/v). The column used was Zorbax C18 column (250mm x 4.6mm, 5 µm) with flow rate of 1 ml / min using UVD 17 Detector. Detection carried out at 320 nm. The retention times of Metronidazole and Ciprofloxacin Hydrochloride were found to be 3.7 min and 5.6 min, respectively. Developed methods were validated according to ICH guidelines. Linearity was observed at concentration range of 50-250 μg/ml for Metronidazole and 62.5-312.5μg/ml for Ciprofloxacin Hydrochloride followed by Beer’s law. The percentage RSD for the method precision was found to be less than 2%. The proposed method is precise, accurate, selective and rapid for simultaneous determination of Metronidazole and Ciprofloxacin Hydrochloride.

Objective of Study: Literature Survey revealed that numbers of method have been reported in literature for the individual analysis of Metronidazole and Ciprofloxacin Hydrochloride by UV spectrophotometric and RP-HPLC method 3, 4

However, there is no reported RP-HPLC method available for simultaneous estimation of Metronidazole and Ciprofloxacin HCl.

The aim of the present work was to develop simple, economic, accurate, specific and precise RP-HPLC methods for simultaneous estimation of Metronidazole and Ciprofloxacin HCL in bulk drugs and combined pharmaceutical formulations and validation of newly developed analytical methods.

Preparation of Mobile Phase and Stock Solution: 25 mM Potassium dihydrgen phosphate buffer of pH 3.0 consisting of 0.15%v/v Triethylamine, 0.1% Phosphoric acid and Methanol in the ratio of( 60:40v/v), used as mobile phase. Standard stock solution of CPX and MTZ were prepared by weighing about 10 mg of drug, dissolved in 10 ml mobile phase to get 1000µg/ml of MZT and CPX.

Preparation of working standards: From stock solution of metronidazole and Ciprofloxacin HCL 0.5 to 2.5 mL and 0.62 to 3.12 ml respectively were transferred to 10 ml volumetric flask.

Area of each peak was measured at 320 nm .The amount of drug present in the sample was determined from peak area of MTZ and CPX present in the pure mixture respectively. The chromatographic conditions were found to yield good separation with satisfactory retention time of about 3.7 min for MTZ and 5.6 min for CPX with sharp symmetrical peak (Figure 3) and analysis of marketed formulations shows in Table 1. 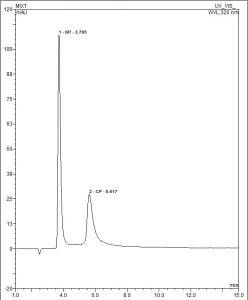 FIG. 3: CHROMATOGRAM OF MTZ AND CPX

Validation of developed analytical method: Validation was done with respect to various parameters, as required under ICH guideline Q2 (R1).

Linearity: Several aliquots of standard solution of MTZ and CPX were taken in different 10 ml volumetric flasks and diluted upto the mark such as final concentration of MTZ and CPX were 50-250 μg/ml and 62.5-312.5μg/ml respectively. These standards were tested three times replicates. Calibration curves were constructed and the proposed method was evaluated by its correlation coefficient and intercept value, calculated in the corresponding statistical study.

Precision: The precision is a measure of the ability of the method to generate reproducible results. The precision of the assay was determined by repeatability (intraday) and intermediate precision (inter-day), system precision and method precision reported as %RSD. For this, 100μg/mL and125 μg/ml of the solution were measured three times in a day, the same was repeated in next three days, same was repeated for bulk drug and marketed formulation.

Accuracy: Accuracy indicates the deviation between the mean value found and the true value. Accuracy was determined by means of recovery experiments, by the addition of active drugs to placebo formulations. The accuracy was calculated from the test results as the percentage of the analyte recovered by the assay.

Robustness: To verify the robustness of the method, the analysis was done under variables pH, mobile phase ratio and flow rate. Sample solution were injected and run under set chromatographic condition.

System suitability parameter: The system was evaluated by analyzing repeatability, retention time, tailing factor and theoretical plats of the column.

RESULTS AND DISCUSSION: All of the analytical validation parameters for the proposed method were determined according to International Conference on Harmonization (ICH) guidelines. 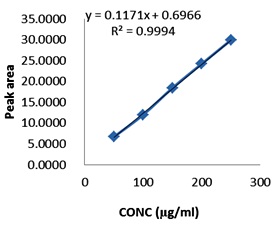 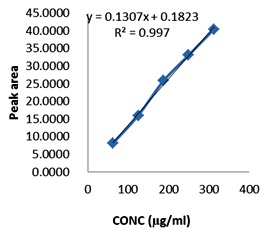 Accuracy: Recovery studies were performed to judge the accuracy of the method. The studies were carried out by adding a known quantity of pure drug to the pre-analyzed formulation and the proposed method was followed. From the amount of drug found, the percent recovery was calculated. Recovery study was carried out at three levels 80%, 100% and 120% for the formulation concentration of 100μg/ml for MTZ and 125μg/ml for CPX shown in Table 3

Robustness: Robustness was performed by small but deliberate variation in the chromatographic conditions and was found to be unaffected by small variations like ±2% in volume of mobile phase composition, ±0.2 ml/min in flow rate of mobile phase and ±2% change in pH. It was observed that there were no marked changes in the criteria, which demonstrated that the proposed method was robust. These parameter shows in Table 5.

CONCLUSION: The RP-HPLC method has been developed for the simultaneous estimation of Metronidazole and Ciprofloxacin Hydrochloride in their combined marketed formulation and bulk drugs. The method gave good resolution for both the drugs with a short analysis time below 8 minutes which enables rapid quantification of many sample in routine and quality control analysis. The developed method was validated. It was found to be simple, precise, accurate and robust. The proposed method can be used for routine analysis of Metronidazole and Ciprofloxacin Hydrochloride in combined dosage form. It can be also used in the quality control in bulk manufacturing.