ABSTRACT: An accurate and precise high performance liquid chromatographic method was developed for quantitative estimation of anagrelide in capsule dosage forms. Chromatographic separation of the drug was achieved on a Kromosil C18 column (150 x 4.6 mm; 5µ) by isocratic elution using a mobile phase consisting of phosphate buffer (pH 2.5) and acetonitrile (75:25 v/v) at a flow rate of 1.2 mL/min. The drug in the eluate was monitored by UV detection at 250 nm. Under optimized conditions, the retention time obtained for the drug was 4.818 min. The calibration curve was linear over the range of 50-150 µg/mL of the drug. The recovery of drug by the proposed method was found to be 98.95% to 100.45%. The performance of the method was validated as per ICH guidelines. The method was also found to be applicable for determination of anagrelide in its capsule dosage forms without any interference from the excipients. The proposed method is suitable for routine quality control analysis of anagrelide.

INTRODUCTION:Anagrelide hydrochloride (6, 7-dichloro-1, 5-dihydroimidazo [2, 1-b] quinazolin-2(3H)-one monohydrochloride monohydrate) is an antithrombotic and platelet-reducing agent used for the treatment of essential thrombocytosis 1. The drug is especially useful in managing chronic myeloid leukemia 2. The mechanism by which anagrelide reduces blood platelet count is still under investigation. Studies in patients support a hypothesis of dose-related reduction in platelet production resulting from a decrease in megakaryocyte hypermaturation 3.

A literature survey revealed that very few analytical methods have been reported for the determination of anagrelide in biological samples and in pharmaceutical dosage forms using LC-MS 4 and HPLC 5-7 techniques. We have developed a new accurate and precise RP-HPLC method with short retention and run times for the determination of anagrelide in raw drug samples and in capsule dosage forms. The developed method has been validated as per ICH guideline 8.

Drugs, chemicals, and solvents: The reference sample of anagrelide was obtained from Aizant drugs, Hyderabad. The commercial capsule formulation of anagrelide (0.5 mg), manufactured by Cipla Ltd., Goa, India, was used for the study. Potassium dihydrogen phosphate, ortho phosphoric acid and HPLC grade acetonitrile, methanol and water used in the experimentation were purchased from Rankem Laboratories.

Equipment and chromatographic conditions: A Waters Alliance liquid chromatograph (Model 2695) fitted with a U.V. diode array detector (Model 2996) and running on Empower2 data handling system was employed in the study. A Kromosil C18 column (150 x 4.6 mm; 5mm) was used for analyzing the drug. All chromatographic runs were carried out in isocratic mode by using a mobile phase consisting of phosphate buffer (pH 2.5) and acetonitrile at a flow rate of 1.2 mL/min. The injection volume of the samples was 10 µL. The detector wavelength was set at 250 nm. Under these optimized conditions, the retention time obtained for anagrelide was 4.818 min.

FIGURE 2: A REPRESENTATIVE CHROMATOGRAM OF THE WORKING STANDARD SOLUTION OF ANAGRELIDE

Phosphate buffer (pH 2.5): The phosphate buffer was prepared by dissolving 6.8 g of Potassium dihydrogen ortho phosphate in 1000 mL of water and adjusting the pH of the solution to 2.5 using ortho phosphoric acid. It was then sonicated and filtered through a 0.45µ membrane filter.

The diluent: A mixture of the phosphate buffer (pH 2.5) and acetonitrile in the ratio of 50:50 v/v was used as the diluent.

Working standard solution of anagrelide: 10 mg of anagrelide reference standard was accurately weighed and transferred into a 10 mL volumetric flask. To this, 2 mL of 0.1N NaOH solution was added and the contents shaken to dissolve the drug. The volume was made up with methanol. This was used as the standard stock solution.

The working standard solution (100 µg/mL) was prepared by transferring 1.0 mL of the standard stock solution into a 10 mL volumetric flask and diluting to volume with water.

Estimation of the drug from the capsule dosage forms: The contents of five capsules of Anagrelide (0.5 mg) were transferred into a 25 ml volumetric flask. To this, 15 ml of the diluent was added and sonicated for 25 min.

The volume was made up with the diluent and the contents were filtered through a 0.45µ nylon filter. Six replicate samples of this solution were then chromatographed. From the chromatograms obtained, the average area of the drug peaks was noted. The drug content in the formulation was calculated from the calibration curve obtained with the standard drug dilutions.

FIGURE 3: A REPRESENTATIVE CHROMATOGRAM OF THE CAPSULE FORMULATION OF ANAGRELIDE

RESULTS AND DISCUSSION: During the method optimization studies, various combinations and proportions of the solvents and buffers were examined on the Kromosil C18 column for efficient separation of anagrelide. Using a mobile phase consisting of a mixture of phosphate buffer (pH 2.5) and acetonitrile in the ratio of 75:25 v/v, a good resolution and baseline separation of the drug peak were obtained. All the chromatographic conditions were optimized after evaluating the column efficiency parameters like theoretical plates and tailing factor (Table 1). Under these optimized conditions, the retention time obtained for anagrelide was 4.818 min (Figure 2). The proposed method was also found to be applicable for the analysis of anagrelide in capsule formulations.

Specificity: A good analytical method should be able to measure the analytes accurately in the presence of probable interferences from matrix and excipients in the formulation. Figure 2 shows good chromatographic baseline separation of anagrelide in working standard solution. Figure 3 demonstrates that no interference was found at the retention time of anagrelide from the excipients in its dosage form.

Linearity: The calibration curve constructed for the drug was linear over the concentration range of 50 – 150 µg/mL (Figure 4). The regression of the plot was computed by the least squares method. The relevant correlation coefficient is greater than 0.99 and the %RSD for each concentration studied (n=3) was less than 2. 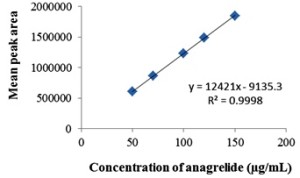 Accuracy and Precision: The accuracy of the method was determined by recovery experiments. The recovery studies were carried out and the percent recovery and standard deviation of the percent recovery were calculated and represented in Table 2. The high percentage of recovery indicates that the proposed method is highly accurate.

The precision of the method was demonstrated by inter-day and intra-day variation studies. Six replicate injections of sample solutions were made and the percent RSD was calculated and presented in Table 3. From the data obtained, the proposed RP-HPLC method was found to be precise.

Method suitability: Studies for recovery of anagrelide from its commercial capsule formulation (Agrylin) were carried out by the proposed method. The average value obtained from six replicate samples (99.6 % recovery) was found to be in good agreement with the labeled amount. This confirms the suitability of the method for the analysis of anagrelide in capsule dosage form.

CONCLUSION: The proposed RP -HPLC method is sensitive, accurate and precise and can be used for the routine quality control analysis of anagrelide in its capsule dosage forms.

ACKNOWLEDGEMENT: The authors are thankful to M/s Aizant Drugs, Hyderabad, for providing the reference sample of anagrelide.