A VALIDATED RP-HPLC METHOD FOR THE ESTIMATION OF ZOLEDRONIC ACID

A VALIDATED RP-HPLC METHOD FOR THE ESTIMATION OF ZOLEDRONIC ACID

ABSTRACT: A rapid and reproducible reverse phase high performance liquid chromatographic method has been developed for the estimation of zoledronic acid in its pure form as well as in pharmaceutical dosage forms.  Chromatography was carried out on an ODS C18column (250 x 4.6 mm x 5 m length),using a mixture of  methanol and 0.01M phophate buffer (pH-3)  (60:40 v/v) as the mobile phase at a flow rate of  0.8 mL/min and the detection was done at 210 nm. The retention time of the drug was 3.812 min. The method produced linear responses in the concentration range of 0.25 to 60 g/mL of zoledronic acid. The method was found to be reproducible for analysis of the drug in parentral preparations.

INTRODUCTION:Zoledronic acid, a bisphosphonic acid, is an inhibitor of osteoclastic bone resorption. Zoledronic acid is designated chemically as (1-hydroxy-2- imidazol- 1- yl- phosphonoethyl) phosphonic acid monohydrate. Zoledronic acid is a white crystalline powder 1. Biphosphonates are hydrolytically stable analogs of pyrophosphate, which inhibit bone resorption as a consequence of affecting osteoclast and probably osteoblast activity. The therapeutic efficacy of bisphosphonates in disorders of bone turnover has been shown in the treatment of Paget’s disease, tumor-induced hypercalcemia (TIH), and multiple myeloma.

Zoledronic acid is being developed for the treatment of tumor induced hypercalcemia, bone metastases arising from any cancer, and for the prevention of bone metastases associated with advanced breast cancer and locally advanced prostate cancer 2. There is no any reported sensitive, reproducible and specific RP-HPLC method for the estimation of Zoledronic acid.

The author made an attempt to develop a rapid, sensitive and validated HPLC method for the estimation of Zoledronic acid. The applicability of this method in determining the drug in commercial dosage forms was also studied.

A commercial zoledronic acid lyophilized injection (Zoltero, Hetero drugs) was purchased from local market. A freshly prepared 60:40 v/v mixture of methanol and 0.01M phosphate buffer was used as the mobile phase pH 3 was adjusted with orthophosphoric acid. Both methanol and 0.01M phosphate buffer were filtered through 0.45 μ membrane filter and sonicated before use.  The flow rate of mobile phase was maintained at 0.8 mL/min. The column temperature was maintained at 25+1­­oC. The detection was carried out at 210 nm.

Drug Stock Solutions: Apure sample of Zoledronic acid was used as the reference standard in this study.About 10 mg of Zoledronic acid was weighed accurately and transferred into a 10mL volumetric flask and dissolved in 5 mL of water.  The solution was sonicated for 20 min and then the volume made up with the mobile phase to get 1 mg/mL solution.  Subsequent dilutions of this solution ranging from 0.1-60 μg/mL were made in 10 mL volumetric flasks with mobile phase 20 µL of the dilutions was injected each time into the column at flow rate of 0.8 mL/min. Each dilution was injected 5 times into the column and the corresponding chromatograms were obtained. From these chromatograms the area under the peak of the drug to that of the Reference standard for each dilution was calculated. The regression of the drug concentrations over the ratios was computed. The regression equation was used to estimate the amount of Zoledronic acid in pharmaceutical dosage forms.

Estimation of Zoledronic acid in Parenteral Preparations: The commercially available Zoledronic acid lyophilized injection of 4mg in 5ml strength (ZOLTERO) of HETERO DRUGS was chosen for this purpose. Take all the 5 vials containing Zoledronic acid parenteral preparations in each vial 4 mg in 5 ml was reconstituted with water for injection. Transfer them into a 25 ml volumetric flask mix thoroughly. It is diluted with mobile phase to get the concentration of 10µg/mL.

RESULTS AND DISCUSSION: The present study was carried out to develop a sensitive, precise and accurate HPLC method for the analysis of Zoledronic acid in pharmaceutical dosage forms. In order to affect analysis of the component peaks under isocratic conditions, mixtures of methanol and 0.01M phosphate buffer in different combinations were tested as mobile phase on a C-18 stationary phase. A binary mixture of Methanol and 0.01M phosphate buffer in 60:40v/v proportion was proved to be the most suitable of all combinations since the chromatographic peaks were better defined and resolved and almost free from tailing. The retention times obtained for Zoledronic acid was 3.54. A model chromatogram is shown in Figure 1. 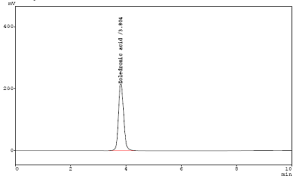 Each of the samples was injected 5 times and the same retention times were observed in all cases. The ratios of peak area of Zoledronic acid to peak area of reference standard for different concentration setup as above were calculated and the average value for 5 such determinations are shown in Table 1 and Figure 2. The peak areas of both the drug and reference standard were reproducible as indicated by low coefficient of variation (0.98).

A good linear relationship (r=0.999) was observed between the concentration of Zoledronic acid and the respective ratio of peak areas. The regression curve was constructed by linear regression fitting and its mathematical expression was y=17691.18x-1428.57 (where y is the ratio of peak areas of the drug to that of reference standard and x is the concentration of Zoledronic acid). When Zoledronic acid solutions containing 4 to 12 µg /mL was analyzed by the proposed method for finding out intra and inter-day variations as low coefficient of variation was observed as shown in Table 2.  This shows that the present HPLC method is highly precise. The amounts of Zoledronic acid obtained from the pre-analyzed samples containing known amounts of added drug are shown in Table 3. About 99.75% of Zoledronic acid could be recovered from the pre-analyzed samples indicating the high accuracy of the proposed method. 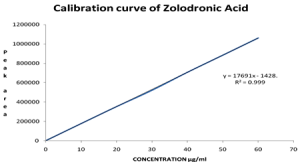 TABLE 2: PRECISION OF THE PROPOSED METHOD

TABLE 3: ACCURACY OF THE PROPOSED METHOD

Robustness of the method was found out by testing the effect of small deliberate changes in the chromatographic conditions and the corresponding peak areas. The factors selected for this purpose were mobile phase ratio (±5), the flow rate (±0.2), the detection wavelength (±3), and the column temperature (±2). The method was found to be robust enough that the peak area was not apparently affected by small variation in the chromatographic conditions. The system suitability parameters were within the limits as shown in Table 4.

The low coefficient of variation indicates the reproducibility of the assay of Zoledronic acid in dosage forms. It can be concluded that the proposed HPLC method is sufficiently sensitive and reproducible for the analysis of Zoledronic acid in pharmaceutical dosage forms within a short analysis time. The method was duly validated by evaluation of the required parameters.

CONCLUSIONS: The isocratic RP-HPLC method developed for quantitative determination of Zoledronic acid is precise, accurate, and selective. The method was completely validated and satisfactory results were obtained for all the method validation data tested.