Categories Menu
Home » A VALIDATED, STABILITY-INDICATING HPLC METHOD FOR THE DETERMINATION OF FELODIPINE AND ITS RELATED SUBSTANCES

INTRODUCTION:  Hypertension  is  a  major  risk  factor  for arteriosclerosis and the beneficial effects of lowering blood  pressure  on  the  vascular  morbidity  and mortality are well documented and demonstrated. Felodipine, a new generation calcium channel antagonist, belonging to the class of dihydropyridines, is a practical advance in the treatment of hypertension 1.

It does not have any negative inotropic effects at doses used for antihypertensive therapy 3, 4. It has a direct relaxing effect on smooth muscle cells, especially those of resistance vessels.

Clinical studies have shown that felodipine is an effective drug for the treatment of essential hypertension 5-7.

There are impurities/related substances associated with the manufacture of felodipine drug substance. The process related impurities are observed with synthetic routes and/or manufacturing processes.

The primary goal of this study was to develop and validate an HPLC method that could separate felodipine from its potential related substances and has sufficient sensitivity for quantitation of these impurities at very low concentrations. The present analytical method discussed in this article is a simple isocratic high performance liquid chromatography with ultraviolet detection for the determination of felodipine and its related substances.

TABLE 1: CHEMICAL NAMES AND STRUCTURES FOR FELODIPINE AND ITS RELATED SUBSTANCES IMPURITY I

Materials and reagents: Methanol, acetonitrile (HPLC grade) and phosphate buffer was obtained from Tianjin Kermel Chemical Reagent Co. Ltd (Tianjin, China).Standard Felodipine (99.9% of purity) and Impurity I (ethyl methyl4-(2,3-dichlorophenyl)-2,6- dimethylpyridine-3,5-dicarbo xylate) (98.6% of purity)were obtained fromThe National Institute for Control of Pharmaceutical and Biological Products. All other chemicals were of analytical grade. Water was purified by redistillation and passed through a 0.22μm membrane filter before use. EXPERIMENTAL:

Sample preparation:10 tablets were weighed and finely powdered. A portion of powder equivalent to felodipine 5 mg was accurately weighed into 50 ml volumetric flasks and 40ml ethanol was added. The volumetric flasks were sonicated for 5min, then the solutions were then made up to volume with ethanol, shaken, centrifugal, take supernatant fluid, the solution was filtered through 0.45μm filter.

Accurately measuring continued filtrate 5m1, put it into 25 ml volumetric flasks, the solutions were then made up to volume with mobile phase, shaken, 20μl of the test solution was injected and chromatogram was recorded; then accurately weighed felodipine reference substance drying to constant at 105oC, the solutions were then dissolved and made up to per 1ml contains 20μg samples with mobile phase, and determined with the same method, calculated peak area with external standard.

Related substances preparation: Impurity I reference substance were weighed, methanol was added to dissolve and quantitative dilution made 1ml solution contains 0.3mg, then 1ml was accurately measured and transferred to a 100ml volumetric flask, 1 ml test solution was added and then diluted to volume with the mobile phase, and mixed.

Method validation: The method was validated according to the high performance liquid chromatography (the Chinese pharmacopoeia 2010 edition appendix V D).

TABLE 2: VALIDATION OF THE METHOD REGARDING SYSTEM SUITABILITY, LINEARITY, LIMITS OF DETECTION AND QUANTITATION.

Linearity and range: The linearity of felodipine and Impurity I were evaluated at five concentrations in the range of 5.05-40.4μg/ml and 0.31-15.50μg/ml,respectively. The linearity curves were defined by the following equations

Accuracy and Precision: Accuracy and precision were established across the analytical range for felodipine. Accuracy of the method was calculated by recovery studies by standard addition method. The method was determined by preparing the samples of the same batch in nine determinations with three concentrations and three replicate each. The accuracy of the method is shown in Table 3.The precision is shown in Table 4.

TABLE 4:  INTERMEDIATE PRECISION OF FELODIPINE AND IMPURITY I 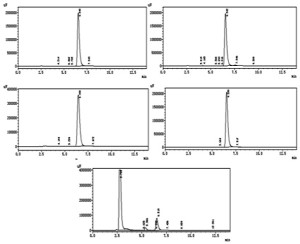 CONCLUSIONS: An HPLC method has been developed and validated for the determination of felodipine and related substances. The developed method is accurate, precise and linear across the analytical range. The method is stability-indicating and specific for the determination and quantitation of trace levels of felodipine and its related substances. This method has especially low limits of detection and quantitation, and was proven to be robust, accurate and precise.

The method is therefore suitable for felodipine and its related substances and applied to other pharmaceutical dosage forms.