INTRODUCTION: Metformin hydrochloride (MET), Fig. 1 chemically is 1-carbamimidamido-N, N-dimethylmethanimidamide hydrochloride with a molecular formula of C4H11N5.HCl and a molecular weight of 165.63 1. It is white to pale white in colour which is freely soluble in water, and is practically insoluble in acetone, ether and chloroform. Metformin hydrochloride is the first-line medication for the treatment of type 2 diabetes 2, particularly in people who are overweight.

It is also used in the treatment of polycystic ovary syndrome 3. Metformin inhibits hepatic gluconeo-genesis in mice independently of the LKB1/AMPK pathway via decrease in hepatic energy state 4.

Teneligliptin (TNG) chemically described as [(2S, 4S) - [- (3- methyl- 2- phenylpyrozol- 3- yl) piperazin- 1- yl] pyrrolidin- 2- [1, 3 thiazolidin- 3- yl) Methanone having molecular formula 426.58 5. It is white to pale white in colour which is freely soluble in water, sparingly soluble in alcohol and methanol. It is a highly potent, competitive and long-lasting DPP-4 inhibitor that improves postprandial hyperglycemia and dyslipidemia.

Literature survey revealed various analytical method validation for metformin including UV methods with empagliflozin 6 - 8 UV with alogliptin benzoate 9 UV with tenligliptin 10 HPLC 11 HPLC with saxagliptin 12 with rouvastatine 13 HPLC with pioglitazone 14 - 15 and other oral hypoglycaemic agents 16 with related compounds 17 while tenligliptin described HPLC 18 HPLC with UV 19 and stability study with LC-MS-MS 20.

Chromatographic Conditions: Various combinations of mobile phases were screened with respect to resolution, theoretical plate capacity factors and other system suitability parameters. Finally the separation was performed with freshly prepared mobile phase consist of methanol: water in the ration of 70:30 and pH up to 3 was adjusted with OPA with isocratic programming at a flow rate of 1.0 ml/min. 235 nm wavelength, injection volume of 20 μL and ambient temperature was maintained during the entire process to obtain symmetric peaks of MET and TNG.

Preparation of Standard Solutions: All solutions were prepared on a weight basis and solution concentrations were also measured on weight basis to avoid the use of an internal standard pharmaceutical formulation which is available in the market has the proportion of 1:25. For the ease of quantification, proportion of MET and TNG was reduced to 1:5 by using standard addition method. Standard stock solution was prepared by dissolving separately 50 mg of MET and 10 mg of TNG in 100 ml clean dry volumetric flask. Dissolved and diluted with methanol up to the mark and filtered through 0.45 μm membrane filter. This gives the concentration of stock solution 500 μg/ml for MET and 100 μg/ml for TNG.

Linearity Study: From the prepared standard stock solutions of both, 0.5 ml, 1.0, 1.5, 2.0, 2.5 and 3.0 ml were transferred to 10 ml volumetric flask and volume made up to the mark with the optimised mobile phase to obtain concentration of 25 - 150 μg/ml for MET, while 5 to 30 μg/ml for TNG respectively. Volume of 20 μL of each sample was injected with the help of Hamilton Syringe. All measurements were repeated three times for each concentration and calibration curve was constructed by plotting the peak area vs the drug concentration.

Validation of Proposed Method: The proposed method was validated as per ICH guidelines. The solutions of the drugs were prepared as per the earlier adopted procedure given in the experiment.

Accuracy: It was done by recovery study using standard addition method at 80%, 100% and 120% level; known amount of standard MET and TNG were added to pre-analyzed sample (75 μg/ml of MET; 15 μg/ml of TNG) and subjected them to the proposed HPLC method.

Precision: Precision is the measure of how close the data values are to each other for a number of measurements under the same analytical conditions.

Intraday and Interday Precision: Intraday precision were determined by analyzing, the three different concentrations 50 μg/ml, 75 μg/ml and 100 μg/ml of MET, while 10 μg/ml, 15 μg/ml and 20 μg/ml of TNG for three times in the same day. Day to day variability was assessed using above mentioned three concentrations analyzed on three different days, over a period of one week.

Repeatability: It is measured by multiple injections of a homogenous sample of 75 μg/ml of MET and 15 μg/ml of TNG that indicates the performance of the HPLC instrument under chromatographic conditions.

Robustness: To evaluate robustness few parameters were deliberately varied. The parameters include variation of flow rate, percentage of methanol using 75 μg/ml solution of MET and 15 μg/ml of TNG.

Sensitivity: Sensitivity of the proposed method was estimated in terms of limit of detection (LOD) and limit of quantitation (LOQ). LOD = 3.3 SD/S and LOQ = 10 SD/S, where SD is the residual standard deviation and S is the slope of the line.

Analysis of Pharmaceutical Formulation: To determine the contents of drugs in conventional tablets (Brand: tenglyn-M tablet labelled claim metformin hydrochloride 500 mg and teneligliptin 20 mg per tablet make zydus). Twenty tablets were weighed, their mean weight determined and they were finely powered. Powder equivalent to 500 mg MET was transferred into a 100 ml volumetric flask containing 50 ml methanol. In that solution standard teneligliptin was added to have the concentration proportion 1:5.The resulting solution was sonicated for 30 min and diluted to 100 ml with methanol. The solution was filtered, using 0.45 µm filter (Millifilter, Milford, MA). Excipients were separated by filtration. The solution was further diluted with optimised mobile phase to get concentration75 µg/ml of MET and 15 µg/ml of TNG which were subjected to proposed method and amount of MET and TNG were determined.

Optimization of Chromatographic Conditions: The primary target in developing this stability indicating HPLC method is to achieve the resolution between metformin hydrochloride, teneligliptin and its degradation products. To achieve the separation of degradation products, octadecyl silane C18 stationary phase and freshly prepared mobile phase consist of methanol: water in the ration of 70:30 and pH up to 3 was adjusted with OPA with isocratic programming at a flow rate of 1.0 ml/min. 235 nm wavelength, injection volume of 20 μL and ambient temperature was maintained during the entire process to obtain symmetric peaks of MET and TNG. The tailing factor obtained was less than two and retention time was about 2.93 and 6.966 min for MET and TNG Fig. 2. 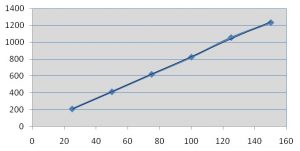 This developed method was found to be specific and method was validated as per international guideline. 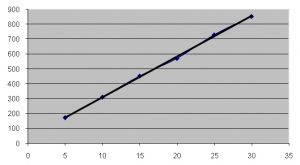 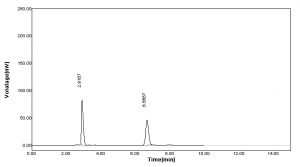 FIG. 4: CHROMATOGRAM OF STANDARD METFORMIN HYDROCHLORIDE AND TENELIGLIPTIN AT 235 nm

Accuracy: To check the degree of accuracy of the method, recovery studies were performed in triplet by standard addition method at 80%, 100% and 120% concentration levels. Known amounts of standard MET and TNG were added to the pre-analyzed samples and were subjected to the proposed HPLC method. The % recovery was found to be within the limits of the acceptance criteria with average recovery of 99.58 - 100.55% for MET and 99.11 - 100.99% for TNG. Result of recovery studies is shown in Table 2.

TABLE 2: RESULTS OF RECOVERY STUDIES OF MET AND TNG

Precision: Precision was evaluated by carrying out six independent sample preparations of a single sample by intra-day and inter-day precision. The sample preparation was carried out in same manner as described in sample preparation. Percentage relative standard deviation (% RSD) was found to be less than 2 % that proves method is precise shown in Table 3.

TABLE 3: RESULTS OF PRECISION STUDIES OF MET AND TNG (INTRA-DAY AND INTER-DAY)

Repeatability: It is measured by multiple injections of a homogenous sample of 150 μg/ml of MET and 15 μg/ml of TNG and the % R.S.D. was found to be less than 2 Table 4.

TABLE 4: RESULTS OF REPEATABILITY STUDY OF MET AND TNG

Robustness of the Method: To evaluate the robustness of the developed RP-HPLC method, small deliberate variations in optimized method parameters were done. The effects of change in flow rate, pH retention time, and in mobile phase ratio were studied. The method was found to be unaffected by small changes like ± 10 % in flow rate, ± 0.2 change in pH, shown in Table 5.

TABLE 5: ROBUSTNESS EVALUATION OF THE HPLC METHOD FOR TMS

Specificity and Selectivity: The method is quite selective. There were no other interfering peak around the retention time of MET and TNG; also the base line did not show any significant noise.

Ruggedness: Different analyst carried out precision studies in a similar manner carried out by first analyst. The % Assay was found to be 99.40 -99.58%, and 99.60 - 99.80% of MET and TNG, respectively. Percentage relative standard deviation (% RSD) was found to be less than 2% that proves method is rugged, shown in Table 6.

System Suitability Test: System suitability testing is essential for the assurance of the quality performance of the chromatographic system. The tailing factor, capacity factor, and theoretical plates for MET and TNG were in the acceptance criteria as per the ICH guidelines Table 7.

Analysis of Pharmaceutical Formulation: The assay procedure was repeated for six times; the percentage content of MET and TNG in the tablet formulation was determined as 98.76 - 101.77% and 98.36 - 101.79% respectively Table 8.

Procedure for Forced Degradation Study: Forced degradation of each drug substances and the drug product was carried out under acidic, basic, oxidative stress, thermolytic and photolytic, conditions. Thermal degradation of drug was carried out in solid state. While remaining all studies were carried out in solution form. Solutions were prepared by dissolving drug with either distilled water, aqueous hydrochloric acid, aqueous sodium hydroxide, or aqueous hydrogen peroxide solution, which is further diluted with mobile phase to achieve a concentration of 150 µg/ml each of MET and 30 µg/ml for TNG. These solutions were kept for 1 hr. For thermal stress, samples of drug was placed in a controlled-temperature oven at 50°C for 1 hr. Solutions of drug substances and drug product were also kept at 80 °C for 48 hr. For photolytic stress, samples of drug in solution state, was irradiated with UV radiation having peak intensity at 254 and 366 nm. The degradation studies Fig. 5 - 8 were tabulated in Table 9. 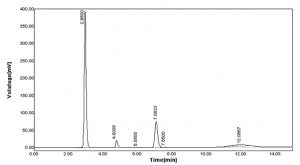 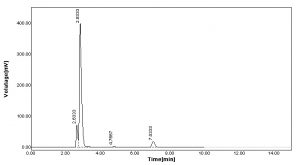 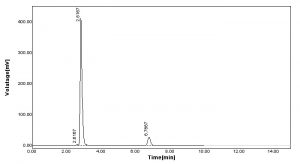 CONCLUSION: The present study was conducted to develop and validate a simple, sensitive and reproducible RP-HPLC method for quantitative determination of metformin hydrochloride and teneligliptin with stressed stability studies under different conditions. The developed chromatographic assay fulfilled all the requirements to be identified as simple, specific, selective and reliable method, including accuracy, linearity, recovery and precision data. Furthermore, this simple and rapid RP-HPLC method can also be used successfully for the determination of metformin hydrochloride and teneligliptin in pharmaceutical formulations without any interference from the excipients and degraded peaks.

ACKNOWLEDGEMENT: The authors are thankful to the Trustees of Khatoon Education Society and Dr. Masood Siddiqui, Principal Khatoon Education Trusts Royal College of Pharmaceutical Education and Research for their support and encouragement throughout the research work. Authors are also thankful to Dr. Reddy’s Laboratories, Hyderabad and Micro Labs Ltd., Bangalore, for providing the generous drugs samples for research.

CONFLICT OF INTEREST: There is no conflict of interest. The authors alone are responsible for content and writing of this article.