ABSTRACT: A simple, precise, accurate, sensitive and robust stability-indicating HPLC method for simultaneous estimation of propylthiouracil and its impurity thiourea has been proposed. The separation was achieved on a C18 column (4.6 mm × 150 mm, particle size 5.0 μm) maintained at 45 ºC with a mobile phase composed of water: methanol: acetonitrile (50:35:15 v/v/v) with 0.1% acetic acid and detection wavelength was 241 nm. In statistical analysis, the linear response in the range of 30 - 300 μg/ml for propylthiouracil and 0.3 - 30 μg/ml for thiourea with a correlation coefficient greater than 0.99 was obtained. In forced degradation studies, PTU was found to degrade under basic hydrolysis, oxidative and photo stress while found resistant to acid/neutral hydrolysis and thermal degradation. The probable structures of six major degradants generated under stress conditions were identified by LC-MS studies and the most likely degradation pathway was proposed from mass spectral data. The information presented herein could be very useful for the impurity profiling of drugs as well as can be employed to check the drug product quality during stability studies.

INTRODUCTION: Propylthiouracil (PTU) belongs to anti-thyroid drugs class called thion-amides, commonly used to treat hyperthyroidism, thyrotoxicosis and hyperthyroidism associated with pregnancy. It is a potent inhibitor of thyroid peroxidase enzyme and impairs the oxidation and organic binding of thyroid iodide thus blocks thyroid hormone synthesis 1. PTU is cited in various Pharmacopoeia to have contaminated by impurity; thiourea (TU). Therefore, it was thought worth determining this impurity to ensure safety, efficacy and quality of the final formulation 2, 3.

Detailed literature indicated different methods viz; HPLC 3, titrimetry 2, potentiometry 2, 3 are available for quantification of PTU in bulk and formulation. Simultaneous estimation methods viz; voltammetry 4 and UPLC-MS/MS 5 with other anti-thyroid drugs are also reported in the literature.

Official TLC method to detect impurity; TU is a semi-quantitative method and lacks stability-indicating potential 2. Two stability-indicating HPLC methods have been reported in the literature; one is applicable to bulk drug 6 and other is to tablet assay 7. The reported stability-indicating method is applicable for assay but is not applicable to its impurity; TU. These methods do not involve the identification of degradation products and are not suitable for LC-MS studies. Other reported methods include the study of the effect of temperature on stability of extemporaneously prepared oral suspensions by HPLC 8, bioanalytical HPLC methods, for estimation in plasma, serum, 9, 10 urine 11 and metabolism studies by LC-MS/MS 12.

Reagents and Chemicals: PTU (Purity 100.25%) was provided as gratis sample by Macleods Pharmaceutical Ltd., Daman, while TU (Purity 99.51%) was procured from Aarti Drugs Ltd., Thane and were used without further purification.

Chromatographic Condition: Resolution of a drug from its Impurity; TU and the degradation products was achieved on Waters HPLC system consisted of a binary pump (Waters 515 HPLC pump), autosampler (717 plus), column oven (Waters CHM) and PDA detector (Waters 2998). The separation was carried out on Cosmocil C18 (4.6 mm × 150 mm, 5.0 µm) column maintained at 45 ºC. The mobile phase composed of water: methanol: acetonitrile (50:35:15 v/v/v) and 0.1% acetic acid, filtered through 0.45 µ membrane filter and sonicated for 15 min before use. The flow rate was 0.80 ml/min. The wavelength of detection was 241 nm; λmax of TU at which PTU also bears considerable absorbance Fig. 1.

Data were integrated using Empower version 2 software. Bruker (Impact II HD MS) equipped with an electrospray ionization source was used for LC-MS studies. The samples were infused into the mass spectrometer from the HPLC system through the ESI interface. The Brucker Compass Data Analysis 4.2 software was used for data acquisition and processing. 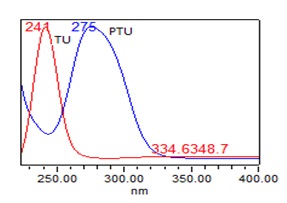 Formulation Assay and System Suitability Test (SST): Twenty tablets were weighed and crushed to a fine powder. An accurately weighed tablet triturate equivalent to 100 mg of PTU was transferred to a 100 ml volumetric flask and volume was made up to 50 ml with methanol. The solution was sonicated for about 10 min to ensure complete extraction of PTU and volume was made with methanol (1000 µg/ml). The resultant solution was filtered through Whatman filter paper no. 41.

The sample solution was prepared by diluting 1.5 ml of the above stock sample solution to 100 ml with methanol (150 µg/ml) and 10 μl was injected after filtration through a syringe filter (0.45 μ PALL Life Sciences) into stabilized chromate-graphic conditions and chromatogram was recorded. Drug concentration in the formulation was calculated using a calibration curve.

Forced Degradation Studies: The aim was to achieve partial degradation of the drug, preferably in 10 - 20% range. The degradation was performed in two sets at two different temperatures; one set was kept at room temperature up to 4 h while another set of solutions was refluxed at 80 ºC for 40 min using 1000 μg/ml of PTU. The degradation samples were diluted with the mobile phase to achieve the nominal concentration of 100 μg/ml of PTU. The degradation was carried out under hydrolytic, oxidative condition using stresser; 0.1 N HCl (acid hydrolysis), 0.1N NaOH (base hydrolysis), HPLC grade water (neutral hydrolysis) and 6% hydrogen peroxide (oxidation). The working standard of 50 mg was spread as a thin film in two separate petri dishes (5 cm diameter) and exposed to 100 ºC in a hot air oven for 5 h; cooled to room temperature and 10 mg of powder was diluted appropriately to obtain a solution that contains 1000 μg/ml of an analyte with methanol. For photolytic stress, drug substance in the solid-state was irradiated with near UV radiation (366 nm) and daylight for 26 h. All samples were then diluted suitably and injected into stabilized chromatographic conditions.

Method Validation: The method was validated as per ICH guidelines for linearity, accuracy, precision, robustness etc. 13

Linearity and Range: The series of solutions in the range of 30 to 300 µg/ml and 0.3 - 30 µg/ml of PTU and TU, respectively. The analytes were resolved under optimized chromatographic condi-tions. A standard calibration graph of peak area vs. concentration was plotted, the entire procedure was executed thrice, starting from the weighing of analytes. The linearity of the method was evaluated by linear regression analysis using the least square method. The slope and intercept were calculated. To further confirm linearity, F test and residual plot of relative response against concentration were plotted, and the pattern was observed; were performed 14. LOD and LOQ were calculated using the regression equation.

Precision: The precision of the proposed analytical method was demonstrated by repeatability and intermediate precision studies. Analysis of sample solution containing 300 μg/ml of PTU spiked with 0.3 μg/ml of TU was performed thrice on the same day and on different days by different analysts to demonstrate intermediate precision. For this, tablet blend equivalent to 300 mg of PTU was spiked with 3 mg of TU and extraction was executed as per the assay procedure.

Each time the sample solution was prepared starting from weighing. Similarly, six independent assays of sample containing 150 μg/ml PTU was also considered. The % RSD and % mean recovery was checked.

Robustness: To assess robustness, deliberate changes in the flow rate, column temperature and use of different brand columns were considered. Solution stability studies were also executed by using a sample solution containing 150 μg/ml of PTU spiked with 15 μg/ml of TU. The effect on resolution, % assay and % RSD was considered to establish the robustness.

Specificity: Optimum resolution was achieved with elution of PTU at 3.99 min and TU at 2.75 min as shown in Fig. 2. The average result for SST parameters is summarized in Table 1. The SST parameters were found acceptable. The resolution was greater than 3.9 and peak tailing was less than 1.5. The formulation chromatogram is shown in Fig. 3 and the % mean assay was found 99.79 with 0.55 % RSD. The peak purity angle values were always found less than purity threshold values for analyte as indicated in Table 1 and Table 5.

This proves the homogeneous peak of a single component and absence of co-elution of inter-ferents and thus demonstrate the specificity of the developed method.

Linearity and Range: It was demonstrated by regression analysis, F-test and residual plots. The least square regression analysis showed correlation coefficient greater than 0.999 while experimental F value found less than critical tabulated F value at 95% confidence level as represented in Table 2. The residual plot of both the analytes was without any trend as seen in Fig. 4.

Thus, demonstrate the excellent correlation between peak area and concentration of the analytes within the selected range. LOD and LOQ values were found satisfactory as seen in Table 2. Thus, developed method can be utilised successfully to detect and quantify the impurity up to 0.05% level in formulation and bulk.

Accuracy: The % mean recovery values were found in the acceptable range; 100 ± 2.0% and % RSD value was less than 2 as summarized in Table 3. Consequently, the proposed method is found accurate to estimate PTU as well as its impurity TU

Precision: In independent sample analysis, the mean % recovery was 99.76 % with % RSD 0.55 demonstrate the repeatability of the developed method. During intermediate precision, the % RSD was found less than 2%, while the mean recovery was 100 ± 2% as indicated in Table 2; establish the precision parameter.

Robustness: There was no substantial impact of small modifications in the HPLC method on the resolution, % recovery and % RSD of the analytes as indicated in Table 4. This revealed that the developed method is robust to these changes.

Characterization of Forced Degradation Products: To gain high-intensity signal and higher sensitivity to characterize the degradation products; ESI source conditions were optimized. The parameters viz; drying gas flow, its temperature, nebulizing gas flow, voltage were optimized. The ionization of the drug and its degradation products was carried out on negative mode due to the presence of two strong electronegative atoms, namely; sulphur and oxygen, to form negative ions rapidly. Standard PTU was introduced to validate the output of the mass spectrometer. Then the drug under stressed condition was introduced into the column. The [M-H]- value observed for PTU was 169.04, which matched with its exact mass (170.05). The column and mobile phase as described above were used for the characterization of degradation products by LC-MS. The analysis was carried out by using electrospray ionization as a source of ionization. Mass spectra were acquired using Bruker (Impact II HD-MS) mass spectrometer. Optimized electron spray ionization parameters were: capillary voltage 3000 V, source temperature 200 ºC, sheath gas/nebulizing gas was nitrogen at pressure 0.3 bar, declustering/entrance potential was -10 V and scan range: m/z 50 to 600. All the samples were prepared in methanol. Mass spectra were acquired and processed using Brucker Compass Data Analysis 4.2 software. The mass spectrum acquired for PTU and LC-MS chromatogram is shown in Fig. 5. 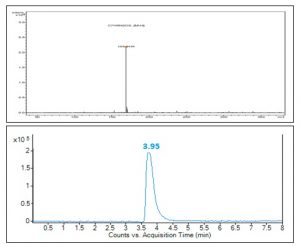 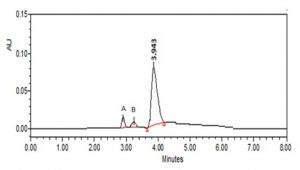 FIG. 6: CHROMATOGRAM OF BASE HYDROLYSIS

The LC-MS spectrum of base induced degradation product B is shown in Fig. 7 while the probable reaction mechanism and the reaction product is depicted in Fig. 8. Since, the degradant, A formed neutral molecule, it was not detected in MS studies but was eluted at the same tR as that of TU. This confirms the formation of TU under base hydrolysis. 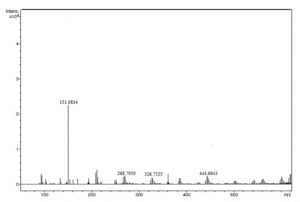 FIG. 8: BASE HYDROLYSIS OF PTU 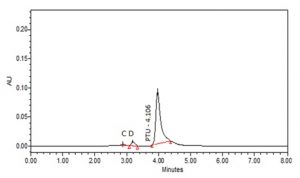 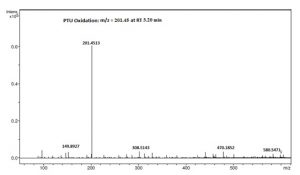 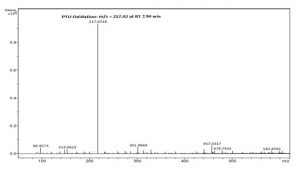 Photo Degradation: PTU was found sensitive towards photo stress and formed two degradants E and F as shown in Fig. 13. The ESI-LC-MS spectra are shown in Fig. 15 and Fig. 16. In LC-MS studies, the degradant with m/z ratio 362 (E) and 339.09 (F) were revealed. The probable reaction products and the reaction is deduced in Fig. 16. PTU formed disulphide linkage upon exposure to photo stress lead to the formation of the dimer. There was no degradation while an additional peak observed in the sample subjected to thermal stress. Thus, it indicates resistance to thermal stress. 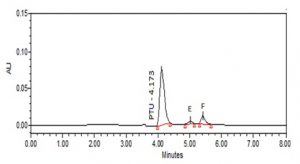 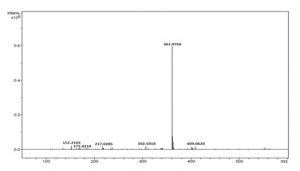 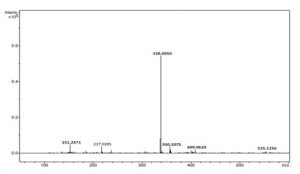 CONCLUSION: The proposed RP-HPLC method is simple, specific, precise, accurate, sensitive and robust, as evidenced from the validation data for both; assay and impurity determination in bulk and in tablet formulation. In the proposed work, efforts have been taken to develop LC/MS suitable methods to identify and characterize the major degradation products generated under stress conditions. The structures of six major degradants generated under base, oxidative and photo stress have been proposed on the basis of their mass-to-charge ratio and known reactivity. The proposed method can be used in the routine analysis of production samples and the quality monitoring of bulk samples. The information presented herein could be very useful for the impurity profiling of drugs as well as can be employed to check the drug product quality during stability studies.

CONFLICTS OF INTEREST: The authors have declared no conflict of interest.