INTRODUCTION: The pathogenesis of non-alcoholic fatty liver disease (NAFLD) has been shown to associate with obesity, dyslipidemia and diabetes.

Steatohepatitis (NASH) is the advanced stage of NAFLD and has been clinically evidenced by cytoplasmic vacuoles (ballooning bodies), fat accumulation, liver cell degeneration, and neutrophil infiltration 1-3.

Because NASH poses significant impacts on health, economy, and society to the patients, finding new strategies to lessen NAFLD is of great interest. Abelmoschus esculentus L. or okra is a familiar vegetable consumed worldwide 4, 5. Considerable amounts of phenolic substances and mucilage polysaccharides have been determined in the seed and the peel, respectively 6, 7. In addition, hypolipidemic activity has been suggested to the mucilage by inhibition against lipase, α-glucosidase, and α-amylase enzymes 8-12. To date, scientific evidence concerning the utilization of okra pods in preventing and treating NAFLD is quite limited. This study was carried out to establish the NAFLD mouse model and examine the pharmacological effects of okra peel and seed on liver functions through biochemical and histological testing.

Preparation of Plant Materials: Okra pods were purchased from local markets in Hat-Yai district, Songkhla province, Thailand. After cleaning with tap water, the peel and the seed were separately collected and dried at 60°C in a hot-air oven until moisture content was less than 5%.

The dried product was ground to fine powder by using a multi-function disintegrator (WF-20B). The acquired powder was kept in an air-tight container at 4°C until use.

Preparation of Animal Feeds: Two types of feed, namely CONTROL and HFD, were purchased from Altromin Spezialfutter GmbH & Co., Germany. Their ingredients were indicated in Table 1. Other three recipes were prepared, including POSITIVE, HFD-OP and HFD-OS formulas. In the POSITIVE formula, a dose of 20 mg/kg/day simvastatin was added into HFD. Either 800 mg/kg/day okra peel powder or 400 mg/kg/day okra seed powder was added into HFD for preparing HFD-OP or HFD-OS formula, respectively. After thoroughly mixing, the mixture was cased in a cylindrical mold to mimic the original forms of feed after purchased and kept in suitable containers at 4 °C until use.

Preparing Animals and Experimental Design: Animal manipulation was conducted according to ethical guidelines for laboratory animals of Universiti Kebangsaan Malaysia, Kuala Lumpur, Malaysia. Thirty male C57BL/6J mice, aged 6 weeks old, weighed 20±5 g, were purchased from Monash University, Kuala Lumpur, Malaysia. They were acclimated 4 per cage in a room at 22± 2 °C with a 12-h light/dark cycle and freely accessed to standard chow and water. After 2 weeks, mice were randomly divided into five groups (n=6), consisting of CONTROL group (mice fed with CONTROL diet), HFD group (mice fed with HFD), POSITIVE group (mice fed with POSITIVE diet), HFD-OP group (mice fed with HFD-OP diet), and HFD-OS group (mice fed with HFD-OS diet). Body weight and food intake were recorded daily at 9.00 AM. At the end of the experiment, mice were anesthetized by intraperitoneal administration using 80 mg/kg sodium pentobarbital and then cardiac punctured. Blood samples were collected in suitable containers and stored at 4°C until analysis. Visceral fats and the livers were removed and weighed. Tissue specimens were kept in suitable containers at -80°C until use.

Histochemical Analysis of the Livers: Liver tissues were cleaned by using normal saline solution and fixed in 10% neutral buffered formalin overnight. A fixed sample was placed in a cassette and dehydrated by using serially diluted ethanol, i.e., 50%, 70%, 80%, and 100%, with 3 times repeated for each. Next, two dehydration steps (3-times repeated) using mixed toluene-ethanol solution (1:1 by volume) and 100% toluene were followed. The processed tissue was paraffin-embedded at -20 °C overnight. Then, sections of 3-µm thickness were made by using a manually controlled microtome, separately placed on a glass slice, and stained by hematoxylin and eosin (H&E) using the standard protocols. Besides, processed liver specimens were cryo-cut into 0.5 µm-thick sections and incubated with 20% Oil Red O solution (Sigma-Aldrich) in an oven at 60 °C for 10 min. After that, the sample was washed by using distilled water to remove any excess dye and subsequently counterstained with H&E for 30 sec. Sliced samples were observed under a bright-field fluorescence microscope (Nikon, DS-Fi2-U3 model, Faculty of Dentistry, PSU) by 3 independent scientists. Photographs with magnifications of 10X and 20X were digitally recorded.

Intake Calories, Body Weight, and Visceral Fat: The amounts of calories intake per day were shown in Fig. 1A, indicating that HFD, POSITIVE, HFD-OP, and HFD-OS groups of mice acquired greater calories from their feeds in compared to CONTROL mice (p<0.001-0.05). However, gaining of the body weight for CONTROL and POSITIVE mice were comparable Fig. 1B. Mice of HFD and HFD-OP groups showed a similar range of body weight, whereas HFD-OS mice had the greatest body weight. Accordingly, the gained body weight and the intake of calories were indirectly associated. The percentage (%) of visceral fat is used as an index of fatness. In Fig. 1C, mice of the POSITIVE group presented the highest %visceral fat. In contrast, CONTROL mice revealed the lowest visceral content. Indeed, the % visceral fat of HFD, HFD-OP, and HFD-OS groups of mice was insignificantly different.

Glucose and Lipids Levels: Blood glucose and serum lipid profiles were determined after the 12-weeks feeding programs. In Fig. 2A, the glucose levels of HFD, POSITIVE, HFD-OP, HFD-OS, and CONTROL mice were not different and ranged between 173 and 233 mg/dL. The levels of TC, TG, LDL, and HDL in serums were shown in Fig. 2B. By comparing with CONTROL mice, increased TC and LDL levels were observed for HFD, POSITIVE, and HFD-OS mice. HFD-OP mice had slightly increased TC and LDL levels compared to CONTROL mice. Meanwhile, all HFD-feeding mice, including HFD, POSITIVE, HFD-OP, and HFD-OS mice, showed similar TG and HDL levels compared to CONTROL mice. 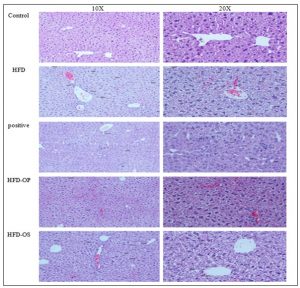 Histochemical Analysis of the Livers: At the end of the feeding programs, mice were killed, and their livers were removed for histochemical analysis using H&E and Oil Red O stains. For HFD mice, several signs of liver pathology were observed, such as macro-/micro-vesicular steatosis, ballooned hepatocytes, neutrophilic infiltration, pericellular/perisinusoidal fibrosis (appeared as “chicken wire”), and necrosis with aggregated Mallory’s hyaline Fig. 3. However, the hepatic tissues of CONTROL mice seemed to be normal. A number of infiltrated neutrophils were identified for the specimens of POSITIVE mice, but this was little for HFD-OP and HFD-OS samples. In addition, it was considerable of fat accumulated in the livers of HFD mice. Indeed, the extent of fat accumulation in HFD livers was greater than that of POSITIVE samples. But limited fat accumulation was determined for the samples of CONTROL, HFD-OP, and HFD-OS mice Fig. 4. 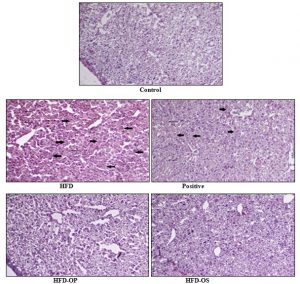 DISCUSSION: The liver plays a central role in lipid metabolisms by importing serum-free fatty acids to manufacture, store, or export as lipids and lipoproteins for the body's needs. Due to overconsumption of lipids and the limited capacity for lipid removal of the liver, excess free fatty acids in blood circulation will be stored as TG in various vital organs. Such retained TG may impair body health and primarily lead to NAFLD development. Although NAFLD is a silent disease, it is mostly diagnosed in individuals who are overweighed or obese and in patients with type 2 diabetes and dyslipidemia 13, 14. Previously, hypoglycemic activity of mucilaginous compounds in the pods of A. esculentus (okra) has been observed in rodents 15. To date, scientific information regarding the preventive and curing properties of okra pods against NAFLD is limited, whereas phytochemicals and biological benefits of this plant have been described 16.

In the present study, mice fed with high-fat diet for 12 weeks (HFD mice) had enhanced body weight and visceral fat Fig. 1, as well as serum TC and LDL cholesterol Fig. 2. Such changes particularly reflected signs of hyperlipidemia and, in agreement with previous literature, hyperlipidemia was supposed to happen in these HFD mice 17, 18. Nowadays, the occurrence of NAFLD is confirmed to follow dyslipidemic and hypercholesterolemic conditions 19. Accordingly, analyses of liver specimens stained by H&E and Oil red Owerecarried out to ascertain that such HFD mice already developed NAFLD. Different pathological phenotypes of NAFLD were detected in their liver samples, including macro- and micro-vesicular steatosis, hepatocellular ballooning; neutrophil infiltration, pericellular-, perisinusoidal-, or “chicken wire” fibrosis; as well as necrosis with aggregated Mallory’s hyaline. In addition, Kupffer cells and cells, which stored fat droplets, were obviously apparent Fig. 3. In regard to Oil red O-stained photographs Fig. 4, the liver cells of HFD mice showed extensive fat accumulation. As simple steatosis (so-called NAFLD) might become steatohepatitis (NASH) when left untreated and ends with liver failure, early management of steatosis is consequently important due to which proper functions of damaged hepatic cells could be recovered. Otherwise, liver macrophages (so-called Kupffer cells) and fat-storing cells are activated. In accompany, neutrophils are infiltrated 19. Consistently, we were successful in developing NASH-bearing mouse model using C57BL/6J strain by feeding the animals with high-fat diet (C 1090–60) for a time period of as short as 12-weeks.

Then, the medical advantages of okra pods in the diminution of NASH were explored by using our own established mouse model. Simvastatin is one of the HMG-CoA reductase inhibitors and is usually prescribed to patients for decreasing LDL and TG levels in the blood 20. Based on a previous literature 21, simvastatin at a dose of 20 mg/kg/day was used to mix with HFD in preparing a POSITIVE diet. Interestingly, various pathological phenotypes of NASH as seen in the livers of HFD mice were slightly detected in liver specimens from HFD-OP and HFD-OS mice Fig. 3. These improvements were accompanied by less fat accumulation Fig. 4. Moreover, simvastatin (20 mg/kg/day) was found to be less effective on retarding and preventing NASH than okra peel (800 mg/kg/day) and okra seed (400 mg/kg/day). Based on the weight of fresh okra pods, 4% and 2% were yields of dried peel and dried seed, respectively (our unpublished data). Therefore, 800 mg dried peel, and 400 mg dried seed were obtained simultaneously by consumption of 20 g pods (equal to 5-6 pods) per day. This amount was recommended and be satisfactory to peoples as a daily vegetable.

Lifestyle modification is accepted as a leading strategy incurring patients diagnosed with NAFLD. Eating a healthy diet, regular exercise, and body weight maintenance are examples 22, 23. However, for a variety of reasons, most people are unwilling or unable to engage in such practices. In fact, small and sustainable changes in lifestyles always yield healthier lives. Instead, additional therapies are requested to address the detrimental effects of NAFLD. For years, intravenous glutathione has been prescribed for treating acute poisoning and chronic liver disease 24. Glutathione is a tripeptide consisting of γ-L-glutamyl-L-cysteinyl-glycine. In the body, it plays a role in antioxidant and detoxification systems. To date, the substance becomes a forefront nutritional bioactive because it is applied in NAFLD treatment 25. Besides polyphenols, flavonoids, and terpenoids, glutathione has been demonstrated to present in okra seed extract 26. In this project, signs of NASH were greatly improved when mice were supplemented by okra peel and okra seed. There were fewer cells of inflammatory responses in the liver specimens of HFD-OP and HFD-OS mice Fig. 3. In accompany, the more proper liver cell integrity and the lesser fat accumulation were observed by comparing with those of HFD and Positive mice Fig. 4. A variety of bioactive compounds in okra pods, such as polyphenols, mucilage polysaccharides, and glutathione, have been considered to involve in these improvements 15, 25, 27, 28-30. Our findings might be advantageous and applicable to patients with NAHS in the future. Nevertheless, molecular mechanisms in regard to modulating effects of okra on lipid metabolism, utilization, and homeostasis of liver cells are warranted, while related experiments are carrying out by ours.

CONCLUSION: Treating NAFLD with western medications is not sufficiently effective at present. Meanwhile, it is certain to moderate liver disease by diets balanced in carbohydrates and fats.

AUTHOR CONTRIBUTIONS: All authors contributed to the conception, design, data analysis, drafting, and revising of the article, gave final approval of the version to be published, and agreed in all aspects of this work.

CONFLICTS OF INTERESTS: The authors declare that they have no conflict of interest.