INTRODUCTION: Natural products from plants have been valuable sources for anticancer drug discovery 1. A screening program was initiated by Leven et al., (1979) that identified many antibacterial antifungal, antiviral, antiparasitic, and other pharmacologically active substance activities in highe

Since there are national and indigenous rights over plant derived resources, basic scientific investigations based on medicinal plants and indigenous medical systems have increased in developing countries 3, 5.  Ancient herbal medicines may have some advantages over single purified chemicals 4. Often the different components in an herb have synergistic activities or buffer toxic effects. Mixtures of herbs are even more complex and so might have more therapeutic or preventive activity than single products alone.

In fact, several studies have demonstrated that extracts from several herbal medicines or mixtures had an anticancer potential in-vitro or in-vivo 5-8. Phenolic and flavonoid contents provide antioxidant activities that may underlie the anticancer potential 9.The cytotoxic screening models are the preliminary methods for selection of active plant extracts against cancer. A huge reservoir of bioactive compounds exists in many species of plants of Earth, only a small percentage of which have been examined and continued to be an important source of anticancer agents. Worldwide effects are ongoing to identify new anticancer compounds from plants. With the current decline in the number of new molecular entities from the pharmaceutical industry, novel anti cancer agents are being sought from the traditional medicines. Ethno medicinally important plants in cancer from Indian medicinal plants which used to treated various types of cancer.  It will be helpful to explore the medicinal value of the plants and for the new drug discovery from it for researchers and scientists around the globe.

Cancer is an abnormal types of tissue growth in which the cells exhibit an uncontrolled division, relatively in an autonomous fashion, leading to a progressive increase in the number of dividing cell 10. The limited success of clinical therapies including radiation, chemotherapy, immune-modulation and surgery in treating cancer, as evident by the high morbidity and mortality rates, indicates that there is an imperative need of new cancer management. Chemoprevention involves the use of pharmacological, dietary bio-factors, phytochemicals and even whole plant extracts to prevent, arrest, or reverse the cellular and molecular processes of carcinogenesis due to its multiple intervention strategies 11.

Tradescantia spathacea, or Moses-in-the-Cradle, is a herb native to Mexico with fleshy rhizomes. It has rosettes of waxy lance-shaped leaves. Leaves are dark to metallic green above, with glossy purple underneath. These will reach up to 1 foot (30 cm) long by 3 inches (7.5 cm) wide. They are very attractive foliage plants that will reach 1 foot (30 cm) tall. They are hardy in USDA zones 9-12. It is invasive exotic to South Florida. The current research was based on the In-vitro cytotoxicity activity in Tradescantia spathacea. This was first report for the plant and no systematic work has been undergone in this plant.

β-catenin was first identified as cell adhesion molecules and further distinguished as proto-ongogene. In Drosophila, it was identified as

Extraction of the plant material

The fresh plant materials were washed with running tap water and shade dried.  The leaves were crushed to coarsely powdered by grinder.  These coarse powders (5g) were then subjected to successive extraction in 250ml of each solvent (hexane, ethyl acetate and methanol) by using Soxhlet apparatus. The collected extracts were stored and then taken up for further investigations. The DMSO (Dimethyl sufloxide) is act as dissolved solvents for these extracts.

The MTT assay, based on the conversion of the yellow tetrazolium salt-MTT, to purple-formazan crystals by metabolically active cells, provided

quantitative determination of viable cells. Cells were placed on to 96 well plates at a cell density of 2×105 mL-1 per well in 100 µL of RPMI 1640 and allowed to grown in CO2 incubator for 24 h (37 ˚C, 5 % CO2). The medium was removed and then replaced by fresh medium containing different concentrations of sample for 48 h. The cells were incubated for 24-48 h (37 ˚C, 5 % CO2). Then, 20 µL MTT ([3- (4, 5-dimethylthiazol-yl)-2, 5-diphenyltetrazolium bromide]) stock solution (5 mg/mL in PBS) was added to each well, then the β- Catenin was added and incubated for 5 h. The medium was removed and 200 µL DMSO was added to each well to dissolved the MTT metabolic product. Then the plate was shaken at 150 rpm for 5 min and the optical density was measured at 560nm. Untreated cells (basal) were used as a control of viability (100 %) and the results were expressed as % viability (log) relative to the control. 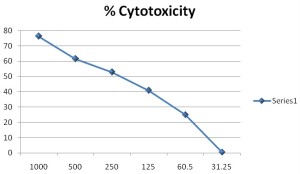 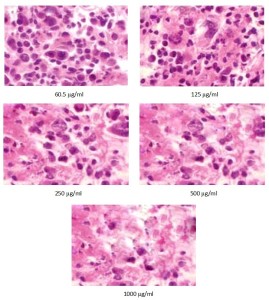 FIGURE 3: IN -VITRO CYTOTOXICITY ACTIVITY IN MCF-7 CELL LINES AND OVEREXPRESSION OF Β-CATENIN

CONCLUSIONS: We well known about signals are way to communicate, transfer all message one cell to another cell and also within cell. Especially, Wnt/β-catenin signaling pathway was transferred message of stem cells self-renewal, differentiation and proliferation. Over expression of Wnt/β-catenin signal induced cancer progression mainly in mammary gland. Most of breast cancer occurred via mutation or overexpression of β-catenin protein in breast. Anticancer agents like nature and synthetic biological or chemical agents cure cancer but they also express their toxicity. Hence, plant derived chemotherapeutic agents were investigated against breast cancer. Here, we reported cytotoxic activities of Tradescantia spathacea medicinal plant, final CTC50 is 229.7 and inhibition of overexpression of β-catenin protein in human breast adenocarcinoma cell line (MCF-7).

ACKNOWLEDGEMENTS: The author is sincerethanks to the Managing director of Alpha Omega Hi- Tech Bio Research Centre, Salem for

supporting and providing the facility to work in the lab.