School of Sciences 3, 4, University of Management and Technology (UMT), Lah.

INTRODUCTION: A graph is a collection of points and lines connecting them. The points and lines of a graph are also called vertices and edges respectively. If e is and edge of G, connecting the vertices u and v, then we write e = uv and say “u and v are adjacent”. A connected graph such that, there are is a path between all pairs of vertices. The distance d (u,v) between two vertices u and v is the length of the shortest path between u and v in G. A simple graph is an un-weighted, undirected graph without loops and multiple edges.

Also, the edge version of Wiener index based on distance between edges was introduced by Iranmanesh et al., 2. The degree of a vertex v is the number of vertices joining to v. Also, the degree of an edge e=uv∈E(G). is the number of its adjacent vertices in V (L (G), where the line graph L (G) of a graph G is defined to be the graph whose vertices are the edges of G, with two vertices being adjacent if the corresponding edges share a vertex in G. Estrade et al., 3 proposed a topological index named the atom-bond connectivity index (shortly ABC as

One of the most important topological indices is well-known branching index introduced by Randić 13 which is defined as the sum of certain bond contributions calculated from the vertex degree of the hydrogen suppressed molecular graphs.

Motivated by the definition of Randić  connectivity index based on the end-vertex degrees of edges in a graph connected ? with the vertex set ?(?) and the edge set ?(?) 14, 15, Vukicevic and Furtula 16 proposed a topological index named the geometric-arithmetic index (shortly ??) as

where ?u(?)= ?e denotes the degree of the vertex ? in ?. The reader can find more information’s on geometric-arithmetic index in 16-19.

In 19, the edge version of geometric arithmetic index was introduced based on end-vertex degrees of edges in a line graph of ? which is a graph such that each vertex of ?(?) represents an edge of ?; and two vertices of ?(?) are adjacent if and only if their corresponding edges share a common endpoint in ?, as follows

Topological Indices of the Line Graph of V-Pantacenic Nanotube: The V-Pantacenic nanotube F[2,5] and its line graph are shown in Fig. 1 and 2 respectively. 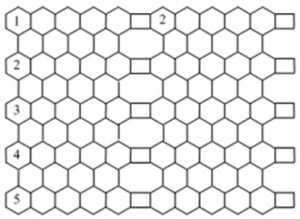 After simplification we get,

Similarly one can find the expression of GA<s