Categories Menu
Home » ACCUMULATION OF ARSENIC IN RADISH (RAPHANUS SATIVUS L.), AND THEIR EFFECTS ON GROWTH AND ANTIOXIDANT ACTIVITIES

ACCUMULATION OF ARSENIC IN RADISH (RAPHANUS SATIVUS L.), AND THEIR EFFECTS ON GROWTH AND ANTIOXIDANT ACTIVITIES

ACCUMULATION OF ARSENIC IN RADISH (RAPHANUS SATIVUS L.), AND THEIR EFFECTS ON GROWTH AND ANTIOXIDANT ACTIVITIES

INTRODUCTION: The consumption of arsenic contaminated water is the main path for its transportation into the environment and biological systems 5, 33, 34. Arsenic in the environment is causing significant global health problems which have once again brought this element to the attention of the broad public 33. The United States Environmental Protection Agency (USEPA), the International Agency for Research on Cancer (IARC), and the World Health Organization (WHO) have all identified inorganic arsenic compounds as human carcinogens 33.

As a non-essential element for living organisms, with propensity to adversely affect the human health 23 and the functioning of ecosystems10, inorganic arsenic calculated as arsenite and arsenate comprise 96% of the total arsenic in vegetables 19, 20. In aerobic soils, arsenate (AsV) is the most stable and dominant species and uptake of arsenate by plants has been studied extensively 18, 19, 20.

In an anaerobic environment under reducing conditions, arsenite (AsIII) is the dominant species. Both inorganic arsenic species are highly toxic to plants 34. Arsenate is a phosphate analog, and therefore it can compete with phosphate in the cytoplasm, replacing phosphate in ATP, leading to the disruption of energy flows in cells 10, 14, 32. On the other hand, AsIII is highly toxic to plants because it reacts with sulfhydryl groups (-SH) in enzymes, their cofactors and tissue proteins 25.

Translocation from roots to shoots unlike phosphorus (P), arsenic (As) has generally low mobility with respect to translocation from roots to shoots in plants except hyperaccumulators 12. The inefficient root to shoot translocation is also reflected in the generally low ratios of shoot As to root As concentrations in plants supplied with inorganic As in tomato 3, Ramirez 14, reported that the arsenic accumulate in vegetables of different families, and arsenic uptake trends were Asteraceae>Brassicaceae>Amaranthaceae> Cucurbitaceae>Liliaceae>Solanaceae> Fabaceae family.

Metal toxicity causes oxidative stress, which can take place possibly by generating reactive oxygen species (ROS)9,21, 22. To scavenge ROS and avoid oxidative damage, plants possess the antioxidative enzymes superoxide dismutase (SOD), catalase (CAT) and peroxidase (POD), glutathione peroxidase, ascorbate peroxidase and glutathione reductase, as well as nonenzyme antioxidants such as ascorbic acid and glutathione 21, 22, 26. Ballia district (Central Ganga plain, area: 2981 sq.km) is situated at the eastern part of the Uttar Pradesh 15. The climatic condition of district Ballia is sub humid climate, grassland vegetation and annual rainfall ranged from 983 - 864.8 mm. More than permissible limit of arsenic (10ppb; WHO 2010) were found in shallow in Ballia district and its main region is geogenic problem 15, 24. Root vegetables viz radish, carrot, turnip etc. were mostly grown in Ballia district. Such vegetables are might be rich source of arsenic for human being through their food intake and cause several disorder like liver cancer 23.

Therefore, the present study was based on the analysis of arsenic in soil, and their effects on growth, antioxidant activities and uptake in radish plant.

The tested topsoil samples were mixed thoroughly with Na2HAsO4-7H2O 22 at the above-mentioned concentrations, filled into plastic pots (20 cm in diameter, 15 cm in height, 2.5 kg air-dried soil per pot) and equilibrated for 28 days22. Seeds of radishwere surface sterilized in 1% (w/v) sodium hypocloride for 3 min, washed several times with sterilized distilled water (SDW), and soaked in SDW overnight26. Twenty soaked seeds were sowed directly into the 0.8% agar plate and incubated for three days in dark room 26, 28. Three similar sizes of sprouted seed were placed in the each treatment pots in the greenhouse with natural light (10–12h; photoperiod) and temperature (16–300C). The tested soils were watered to reach 60% of the water-holding capacity and this level was maintained by watering daily throughout the experiment. The plants were harvested after 15, 30, 45 and 60 DAS (days after showing) for further analysis.

Physico-chemical analysis of plant: Edible part (EDP), Leaf (L) of the plant were examine for their length, fresh weight (FW), dry biomass (DW) were examined after 15, 30, 45 and 60 DAS.  Leaf chlorophyll a (Chl-a) and b (Chl-b) were estimated by spectrophotometrically (A663nm and A645nm) by method 1. The content of glucose, fructose and sucrose was determined by the ferrocyanide method 6. Proline content (µg mg-1 FW) was determined according to Bates2 in the 0.5 gm fresh weight (FW) of leaf tissue at 520nm.  Analysis of ions leafs of plant were harvested and dried in an oven at 680C for 48 h and the dried leaves were ground and digested in an acid mixture (HNO3:H2SO4:HClO4 = 10:1:3) for determination of K+ and Ca+ according 16. Leaf phosphate content was measured according 4.

Total soluble sugars (TSS) were estimated by earlier described method26, 100 mg of fresh leaves were placed in a test tube containing 5 ml 2.5 N HCl, boiled for 3 h then cooled to room temperature. The solution was neutralized with solid sodium carbonate until effervescence stopped. The final volume was made up to 100 ml with distilled water, centrifuged at 1000 g for 10 min and the supernatant (0.5–1.0 ml) collected for TSS analysis using the anthrone method described above.

Plant and soil metal analysis: The plants were immersed in a 0.01M HCl solution to remove any external cadmium and rinsed with deionized (DI) water for 1 min. Subsequently, the plants were separated into three parts: root, stem and leaf. After that, they were dried at 100°C for 10 min, then at 70°C in an oven until completely dry. The plant and soil samples were digested with a solution of 3:1 HNO3:HClO4 (v/v).

RESULTS: Growth of redish plant was decreasing with increasing concentration of arsenic in pot experiment as compared with control (C*), Length of edible part (EDP) and leaf (L) was significantly (P < 0.05) decreasing from As treatment of 40 and 100ppm, 30 to 100ppm respectively after 30DAS, while length of EDP and L was decreasing from at 30 and 10ppm respectively after 60DAS and plant survived upto 90ppm and 80ppm after 30 and 60DAS respectively (Table 1). Influence of As concentration on fresh weight of the plant was not significantly (P < 0.05) affected upto 40ppm treatment after 30DAS, while after 60DAS significantly effect was observed from 10 to 80ppm (Table 1).

TABLE 1: INFLUENCE OF ARSENIC ON GROWTH PARAMETERS OF EDIBLE PART (E), LEAF (L) AND LEAF CHLOROPHYLL A & B OF THE RADISH PLANT IN POT-EXPERIMENT (GREEN HOUSE EXPERIMENT) AFTER 30 AND 60 DAYS

TABLE 2: EVALUATION OF FRUCTOSE, SUCROSE, TOTAL SOLUBLE SUGARS AND PROLINE CONTENT OF THE RADISH PLANT PART (EDP OR LEAF) UNDER DIFFERENT CONCENTRATION (PPM) OF ARSENIC IN POT EXPERIMENT, AFTER 30 AND 60 DAS (DAYS AFTER SHOWING)

TABLE 3: EVALUATION OF CALCIUM, PHOSPHORUS AND POTASSIUM CONTENT OF THE RADISH PLANT PARTS (EDP / LEAF) UNDER DIFFERENT CONCENTRATION (PPM) OF ARSENIC IN POT EXPERIMENT, AFTER 30 AND 60 DAS (DAYS AFTER SHOWING) 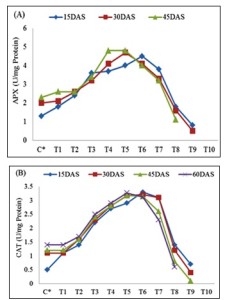 Due to irrigation practices in agriculture field, arsenic present in the soil. In the present study, Agricultural field soil samples (N=50) showed arsenic level (range 0.002 to 145 mg kg−1) in Ballia district. Presence of arsenic metal in the soil allow to enter in the tropic level and damaging the ecosystem, in this connection the present study, Radish plant were shown in pot augmented with different concentration of arsenic (10 to 100ppm) and result revealed that plant was not survive at > 80ppm As treatment after 60DAS (Table 1), due to metal toxicity 9,10,14.

Plant growth was significantly (P <0.05) affected in the pot experiment under increased concentration of arsenic (Table 1) after 60DAS as compared with 30DAS and control. Length, Fresh weight and Dry weight of the treated plant were not statically significant (P <0.05) affected at lower concentration of As after 30DAS, due to tolerance behavior of the plant 10, 29, while at higher concentration of As treated plant showed significant reduction in their growth 10, 29, 31,32. This highlights that although soil arsenic concentration is an important variable, there are other factors that may influence plant uptake 8. One is arsenic speciation, which is known to affect plant uptake 7, 10, 20. The second influence includes soil characteristics such as pH, organic matter, clay content, water regime and nutrient balance (i.e. phosphate) 5, 9. Chlorophyll –b content in treated leaf plant was significantly affected under As treatment as compared with chlorophyll-a (Table 1). 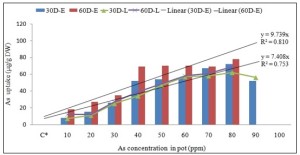 FIGURE 2: Arsenic uptake by the radish plant (Leaf and EDP: Edible part) at different treatment of arsenic concentration in pot after 30 and 60DAS. DAS or D=Days after showing, E=Edible part of the plant and L=leaf of the plant.

In general, under plant stress alter the nutrient imbalance26, chlorophyll content was reduced at increased concentration of ion or metals 27. In the present study, Fructose and sucrose content in EDP of the plant was decrease with increased concentration of As, maximum reduction was observed at >40ppm in both 30 and 60DAS (Table 2). TSS and Proline content was almost not significantly affected up to 40ppm, while  increasing trend was observed upto 40ppm for TSS and decreasing trends were >40 to 80ppm. Increasing concentration of proline content was observed for all the As treated plant as compared with C* (Table 2). Decreased fructose and sucrose, Increased TSS content of plants under stress is another important defense strategy to cope with stress 26, 27, 28.

Proline accumulation in plants is an indicator of general stress tolerance or salinity tolerance as it mediates osmotic adjustment and protects intracellular macromolecules from dehydration and also serves as a hydroxyl radical scavenger21. In the present study, calcium, P and K content in plant was more after 30 DAS followed by 60DAS, while P was significantly (P<0.05) more affected from 10 to 80ppm As treated plant as compared to Ca and K. Influence of As in cell leads to nutrient imbalance 9. It has been shown that plants take up arsenate, the dominant species in oxic environments, via the phosphate transport system since the phosphate ion is similar to the arsenate ion 5. Antioxidant activities of the traded plant leaf showed their defense mechanism against reactive oxygen species (ROS), which has been produce under stress condition 21, 26. In the present study, APX and CAT activities of As treated plant leaf showed increasing trends from C* to 40ppm and C* to 50ppm respectively after 15, 30, 45 and 60DAS (Figure 1). In the present study, about 70 µg of As /g of DW of EDP accumulate after 60DAS at ≥ 40 to 80ppm As treated plant, more As uptake was observed in EDP than leaf (Figure 2).

It has been shown that arsenic in soil is the major source for arsenic uptake by crops (8). Similar reports are available for accumulation of As in rice, beetroot, lettuce, potato and radish etc. 34 , 14, 19 and the amount of As in the edible parts of these vegetables can reach relatively high levels of As, for example more than 30 mg As kg-1 (DW) in radish 19, 20, which could pose a problem for heavy consumers of particular vegetables cultivated in As contaminated soils. In wild-type A. thaliana, 73 and 2.6% of P and As, respectively, taken up by roots was distributed to the shoots 12.

Generally, arsenic is primarily found in the roots rather than in the shoots of plants. Rofkar& Dwyer,17 reported more than 15 times higher As concentration in Spartina pectinata, and  28-75 times higher As concentration in rice were found in the roots than in the shoots (13). In the present study, As uptake by the EDP was significantly more in 60DAS (R² = 0.810) than 30DAS (R² = 0.753) as compared with control. The value of R2 ≈ 1 indicate the linear relation of As uptake in plant and As concentration in soil, result reveled (Figure 2) maximum linear correlation found in the case of maturity of the plant in EDP. More BCFs (>1) was observed for the plant at 40 (BCF=1.3) and 50ppm (BCF=1.08) after 30DAS, while > 1 BCF were recorded for all treatment after 60DAS. Maximum BCF=1.73 was recorded at 40ppm treated plant after 60DAS. Plants with BCF values≥1 are often classified as hyperaccumulators 29. The Asteraceae and Brassicaceae families have been identified to have members classified as hyperaccumulator plants 29.

Therefore, the result revealed from BCF calculation in radish plant act as hyperaccumulator for arsenic after their maturity. Hence, arsenic reaches to the human being through trophic level beyond the recommended permissible level.