In the present study, ethanolic nanovesicles of Aceclofenac developed for the site specific delivery to joints for effective treatment of osteoarthritis. Ethanolic nano-vesicles were prepared by solvent dispersion method. Vesicles were characterized for vesicular size, surface morphology, size and size distribution, zeta potential, entrapment efficiency. Formulations were also evaluated for drug-vesicle (excipients) interaction, in vitro permeation, in vitro deposition. The TEM showed dark vesicular structures by which it is possible to notice the outer most bilayer. In the ethanol concentration range of 20-40%, the size of the vesicles increased with decreasing ethanol concentration, with the largest vesicles in preparations containing 20% ethanol (809.34±2.329 nm)  and the smallest in preparations containing  40% ethanol (627±3.684 nm). Zeta potential of formulations shows negative value, which indicates that, the higher concentration of ethanol make the negative charge on vesicles surface. The entrapment was found to increase with increase in ethanol concentration, however percent entrapment decreased when ethanol concentration exceeded 40%. The FTIR spectra reveled no considerable change in IR peaks of Aceclofenac loaded ethanolic vesicles when compared to pure drugs there by indicating absence of any interaction.

INTRODUCTION:There are various non steroidal anti-inflammatory drugs (NSAID) used for the treatment of osteoarthritis in which aceclofenac is most commonly used. Aceclofenac is a phenyl acetic acid derivative related to diclofenac. It is a potent analgesic, anti-pyretic and anti-inflammatory agent used in the management of moderate-to-severe pain and in rheumatic disorders such as rheumatoid arthritis. Aceclofenac is 20% excreted in the faeces. It is practically insoluble in water.  When taken orally, aceclofenac induce side effects, most common include dyspepsia (7.5%), abdominal pain (6.2%), nausea (1.5%), diarrhoea (1.5%), ulcerative colitis (0.1%) and disturbance of platelet function.

Topical delivery of aceclofenac is better option for its site-specific delivery, and overcomes the problem associated with conventional oral therapy 1. As the drug is applied topically in a gel form, it will act as site specific delivery, avoid first pass effect and overcome the side effects of gastro-intestinal (GI) tract, and thus it helps in the dose sparing. Conventional formulations are not able to highly permeate the skin and deliver the drug in sufficient amount. The liposomes are also comparatively not efficient at delivering drug molecules through membrane bilayer into cell; thus a large body of research has been devoted to modifying phospholipid vesicles in order to increase their ability to penetrate deeper layers of the skin.

Ethanolic nano-vesicles provide a number of important benefits including improving the drug efficacy, enhancing patient compliance, comfort and reducing the total cost of treatment 2. These vesicles have been found to be much more efficient at delivering drug to the skin, than liposomes or hydro alcoholic solutions.

Hence, the present study was design to develop transcutaneous delivery of aceclofenac to the site specific delivery to joints for effective treatment of osteoarthritis. To achieve this, ethanolic nano-vesicles of aceclofenac were prepared and evaluated for their in vitro and in vivo performance.

Preparation of Ethanolic Nano-Vesicles: The ethanolic nano-vesicles were prepared by solvent dispersion method 3. The ethosomalsystem was composed of soyaphosphotidylcholine (PC) up to 2-3%, 20-40% ethanol, 2% aceclofenac and water up to 100% as shown in Table 1.  PC and drug were dissolved in ethanol. Double distilled water was added slowly in a fine stream with constant mixing at 700 rpm with the help of magnetic stirrer (Remi, India). Mixing was continued for an additional 5 min.

The system was kept at 30°C throughout the preparation and was then left to cool down at room temperature 4. As a vehicle for incorporation of ethanolic nanovesicles for topical delivery, gels were prepared. Optimized ethanolic nanovesicles were utilized for the formulation of topical gel. The appropriate quantity of carbopol 934 powder (0.5, 1, 1.5 g) was dispersed in to distilled water with continuous mixing and allowed to hydrate for 4 to 5 h.

The dispersion was neutralized with 10% (w/v) aqueous solution of sodium hydroxide to adjust the pH. Optimized ethanolic nanovesicle were taken and incorporated in to the gel drop by drop to form the ethanolic nanovesicles gel as shown in Table 2. Conventional gel of aceclofenac was prepared by dissolving 0.75 g of carbopol 934 in 100 ml of distilled water, by adding 1 g of aceclofenac with proper mixing for avoiding any lump formation and finally pH was adjusted by 10% (w/v) aqueous solution of sodium hydroxide.

The size distribution and zeta potential of vesicles were determined by dynamic light scattering (DLS) using a computerized inspection system (Nano ZS, Malvern Inst, UK). For size measurement, vesicular suspension was mixed with the appropriate medium (20-45% ethanolic solution). The measurement was conducted in triplicate, in a multi-model mode of 200s each at medium stable count rate 2. The electric potential of the ethanolic nano-vesicles, including its stern layer (Zeta potential) was determined, by injecting the dilute system (1:200) into zeta potential measurement cell.

Where, Qt and Qs are the amount of aceclofenac added in suspension and the amount detected only in the supernatant, respectively.

Skin penetration studies were carried out by locally fabricated Franz-type diffusion cell. Human skin was mounted horizontally with the stratum corneum side up; dividing the cell into two compartments i.e. the donor and the receptor compartments. The dermal side of skin was immersed in PBS (pH 7.4) and the ethosomal and transfersomal formulation was in contact with outer skin layer. The donor compartment of the diffusion cell was covered with the parafilm to avoid any evaporation process. The receptor was filled with PBS (pH 7.4) saline phosphate buffered solution. The receptor fluid was constantly stirred with a magnetic stirrer in order to ensure its homogeneity.

Formulation (1 g compare with Hifenac) was applied in the donor compartment. Pseudo –sink conditions were maintained throughout the duration of the permeation experiments. The duration of experiment was 24 h. One ml of the receptor phase was withdrawn after 1h, 2h, 3h, 4h, and 24h and analyzed spectrophotometrically to determine the amount of permeated aceclofenac.

The withdrawn volume was replaced with fresh medium each time and a correction for dilution was carried out. The permeation study was carried out at 37°C, and chamber was kept protected from light.

After shaking for 5 min and centrifugation for 5 min at 5000 rpm, the drug concentration was determined in supernatant spectrophotometrically at 275 nm 4.

RESULT AND DISCUSSION: In the present investigation, a formulation of aceclofenac loaded ethanolic nano-vesicles was prepared with ethanol and PC, in order to improve the skin penetration and for providing controlled release. In this method, ethanol provides the vesicle with soft flexible characteristics which allow them to more easily penetrate into deeper layers of the skin; it has been used as an efficient permeation enhancer.

PC is used as it exhibited higher hydration effect for the permeation of the vesicles as well as increasing the micro viscosity and rigidity of the bilayer of vesicles, resulting in a higher stability, reduced permeability 8 and hence greater drug retention.

The TEM showed dark vesicular structures by which it is possible to notice the outer most bilayer representing strong interactions between the PC and drug 9 as shown in Figure 1. 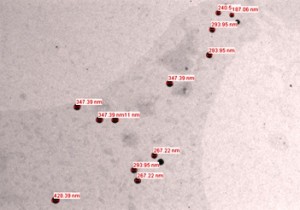 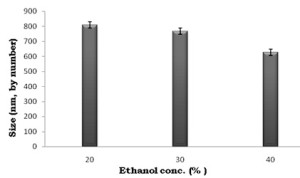 FIGURE 2: DEPENDENCE OF ETHANOL CONCENTRATION ON SIZE OF ETHOSOMAL FORMULATIONS

On the other hand, it was seen that the increase in PC concentration resulted in an increase in the mean particle size. The differences in size among all the batches studies here are found to be statistically signiﬁcant (P < 0.05). So, it could be concluded that both ethanol and PC had a remarkable effect on the vesicle mean diameter of the studied formulations.

Zeta potential of the selected formulations was done byMalvern Zeta master (MAL, 500962, Malvern, UK). Zeta potential of formulations shows negative value, which indicates that, the higher concentration of ethanol make the negative charge on vesicles surface. It shows that at higher ethanol concentration the membrane thickness is reduced considerably, due to the formation of a phase with interpenetrating hydrocarbon chain. The negative charge on vesicle surface due to the presence of ethanol, prevent the aggregation or clump formation and maintain stability of the formulation as shown in Table 3. Effect of ethanol concentration was observed on percent entrapment of ethanolic nano-vesicles.

The permeation studies were performed using excised human cadaver skin mounted on Franz diffusion cell. The optimized formulation of ethanolic nano vesicles i.e. EG3 which shows highest rate of drug permeation through dialysis membrane, were utilized to predict release profile through human cadaver skin. There was increase in % cumulative amount of drug at higher ethanol concentration up to 40 % then there was reduction in permeation. This was due to the disruption of lipid bilayer at higher ethanol concentration.

Ethanol provides the vesicles with soft flexible characteristics, which allow them to more easily penetrate into deeper layers of the skin. When lecithin concentration was increased, there was increase in drug permeation. Use of propylene glycol also influenced the amount of drug permeation.

Propylene glycol also acts as permeation enhancer, which increases permeability of vesicle through biological membrane due to synergistic effect with ethanol on bilayer of the vesicles. High permeation of lipophilic compounds can again be explained by the high lamellarity through-out the vesicle to the core and by the presence of ethanol.

Subsequently, larger quantities of drugs will be released from the vesicles, thereby increasing the amount of free drug available for diffusion inside the deeper skin layers.The % cumulative amount release of optimized ethosomal formulation (EG3) through cadaver skin is more than the % release through dialysis membrane, which represents that the presence of various lipidic layers in skin promotes the permeation of drug through the skin as shown in Figure3.