ABSTRACT: Achyranthes aspera L. (family: Amaranthaceae), an erect and much branched diffuse herb is a medicinal plant, frequently found in tropical and warmer regions as weed. The plants are reported to contain following major classes of compounds: fatty acids, a number of oleonic acid, bisdesmosidic, triterpenoid based saponins, ecdysterone, n-hexacos-14- enoic, oleanolic acid, triacontanol, spinasterol,dihydroxy ketones, spathulenol, alkaloids, D-glucuronic, Betaine, Achyranthine and various amino acids. This acrid, bitter plant has been used as indigenous medicine and commonly used by traditional healers for the treatment of various diseases. Though almost all of its parts are used in traditional systems of medicines, seeds, roots and shoots are the most important parts which are used medicinally. The present article gives an account of updated information on its classification, morphology, geographical sources, phytochemical and pharmacological properties. The review reveals that wide numbers of phytochemical constituents have been isolated from the plant which possesses activities like antiperiodic, antiasthmatic, hepatoprotective, anti-allergic, expectorant, stomach tonic, laxative, antihelmintic, diuretic, linthontriptic, sudorific, demulcent, anti-inflammatory, anticataract, antifungal, antibacterial, hypoglycemic, antihyperlipidemic and haematinic and various other important medicinal properties. For the last few decades or so, extensive research work has been done to prove its biological activities and pharmacology of its extracts.

INTRODUCTION: Nature has been a source of medicinal agents for thousands of years and an impressive number of modern drugs have been isolated from natural sources 1. India is a land of rich biodiversity, the total number of lower and higher plants in India is about 45,000 species. The plants are potential source of medicines since ancient times 2.

A medicinal plant is factually any plant which in one or more of its parts contains substances that can be used for therapeutic purposes or which are precursors for the synthesis of direct therapeutic agents. Approximately 25% of drugs in modern pharmacopoeia were derived from plants and many others were synthetic analogues built on prototype compounds isolated from plants. Infectious diseases are the world's leading cause of premature deaths3. Therefore, there is a continuous and urgent need to discover new antimicrobial compounds with diverse chemical structures and novel mechanisms of action. Medicinal plants represent a rich source of antimicrobial agents. Plants are used medicinally in different countries and are a source of many potent and powerful drugs 3, 4, 5.

The antimicrobial properties of plants have been investigated by a number of researchers worldwide. In recent years the interest to evaluate plants possessing antibacterial activity for various diseases is growingand it has also been proved that various plants extracts possess bacterio-static and bactericidal effects 6 and most of the plants contain many bioactive compounds. Plants are potent biochemical factories and have been components of phyto medicine. Plants based natural constituents can be derived from any part of plant like bark, leaves, flowers, roots, fruits, seeds, etc 7.

Herbal drugs constitute a major part in all traditional systems of medicines. Herbal medicine is a triumph of popular therapeutic diversity. Plants above all other agents have been used for medicine from time immemorial because they have fitted the immediate personal need, are easily accessible and inexpensive 8. According to a WHO report, about 70-80% of the world’s populations rely on non-conventional medicine mainly from herbal sources in their primary health care. It is specially the case in developing countries where the cost of consulting a western style doctor and the price of medication are beyond the means of most people 9. World Health Organization has made an attempt to identify all medicinal plants used globally and listed more than 20,000 species and more than 80 % of the world’s population relies on traditional herbal medicine for their primary health care 10, 11.

Plants continue to serve as possible sources for new drugs and chemicals derived from various parts of plants 12. In recent times, there has been a marked shift towards herbal cures because of the pronounced cumulative and irreversible reactions of modern drugs. However, due to over population, urbanization and continuous exploitation of these herbal reserves, the natural resources along with their related traditional knowledge are depleting day by day. The ethnic and rural people of India have preserved a large bulk of traditional knowledge of medicinal uses of plants growing around them. This knowledge is handed down to generations through word of mouth and is extensively used for the treatment of common diseases and conditions and it has occupied a pivotal position in Indian culture and folk medicine 13.

Plant Achyranthes aspera has been classified in the following order; 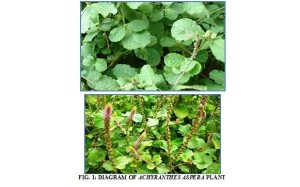 The plant grows in tropical and warmer regions. It is found in tropical Asian and African countries, in Baluchistan, Ceylon, Australia and America 17, 18. In India, it predominantly grows as a weed on road sides, in vacant agricultural land, especially in uncultivated lands and along the boundaries of the cultivated fields. It grows up to an altitude of 2100 m Achyranthes aspera is found in South Andaman Islands 19, 20.

PHYTOCHEMISTRY: Achyranthes aspera is traditionally valued as a potent medicinal agent. Chemical constituents of various parts of the plant has been isolated and identified.

ROOT: A phytoecdysteroid 20-Hydroxyecdysone (ecdysterone or 20E) has been isolated from the methanolic extract of roots of Achyranthes aspera 21. An aliphatic acid n-hexacos-14- enoic acid is obtained from the ethanolic extracts of roots 22. Some other compound like strigmasta-5, 22-dien-3-E-ol, trans-13-docasenoic acid, n-hexacosanyl n-decaniate, n-hexacos-17-enoic acid and n-hexacos-11- enoic acid are also isolated from the root (fig. 2). Phytosterol strigmasta-5, 22-dien-3- E-ol is isolated from petroleum ether: benzene (75:25) elute as a colourless crystalline mass. It responds positively to Liebermann Burchard test for sterols. Oleanolic acid (0.54%) is found in Achyranthes aspera root extracts 23, 24. 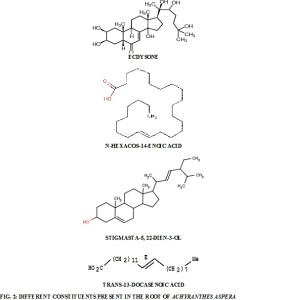 FIG. 2: DIFFERENT CONSTITUENTS PRESENT IN THE ROOT OF ACHYRANTHES ASPERA

STEM: Dihydroxy ketones-36, 37-dihydroxyhenpentacontan-4-one, and Triacontanol, aliphatic alcohol, 17-pentatriacontanol, penta-triaontane, 6-pentatriacontanone, Hexatriacontane, Tritriacontane, tetracontanol-2 (C40H82O), 4-methoxyheptatriacont-1-en-10-ol (C33H76O), E-sitosterol and spinasterol 25, 26 ,27 are isolated from the shoots of the plant (fig. 3). Triacontanol was also isolated along with 36, 47-dihydroxyhenpentacontan-4-one 21. Two long chain compounds, isolated from the shoots, have been characterized as 27-cyclohexylheptacosan-7-ol and 16-hydroxy-26-methyleheptacosan- 2-one 28. Kunert et al, 200029 has reported three bisdesmosidic saponins (I-III), 20-hydroxyecdysone and quercetin-3-O-β-D galactoside in the methanol extract of the aerial parts of Achyranthes aspera their structures are established on the basis of NMR spectroscopic analysis; the complete 1H and 13C assignments of the compounds are achieved by means of 2D NMR studies. Aziz et al, 2005 17 has been isolated 3-Acetoxy-6 benzoyloxyapangamide from an ethyl acetate extract of the stem of Achyranthes aspera. The extract shows mild antibacterial activity against Bacillus cereus. 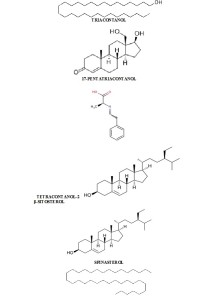 LEAVES: Rameshwar, 2007 30 isolated chemical compounds of the volatile oil from Achyranthes aspera leaves. Hydroquinone (57.7%) is the chief constituent; others are p-benzoquinone, spathulenol, nerol, α-ionone, asarone and eugenol (Fig. 4). Alkaloids, flavonoids, saponins, tannins and phenolic compounds are found in the leaves 31. 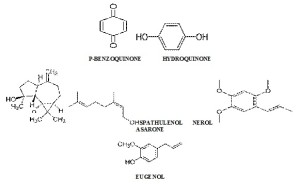 FIG.4: DIFFERENT CONSTITUENTS PRESENT IN THE LEAF OF ACHYRANTHES ASPERA

SEED: Phytochemical investigations of the seeds (Fig. 5A) show the presence of triterpenoid Saponins A and B. Saponins C and D are reported from unripe fruits 32, 21. Its carbohydrate components are the sugars D-glucose, L-rhamnose, D-glucuronic acid (Saponin A). Saponin B is identified as β-D galactopyranosyl ester of D-Glucuronic acid. The seeds also contain water soluble base, betaine and a water soluble alkaloid (Fig.5B) Achyranthine, 10-tricosanone, 10-octacosanone and 4-tritriacontanone 21. 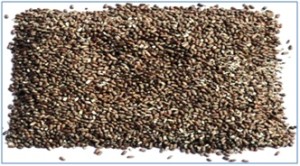 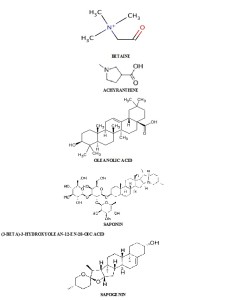 FIG. 5B: DIFFERENT CONSTITUENTS PRESENT IN THE SEED OF ACHYRANTHES ASPERA

Uma et al, 2010 37 evaluated the antinociceptive activity of ethanolic extract of A. Aspera (EEAA) and to find the phytochemical responsible for this activity with possible mode of its activity.The aqueous extract of the entire plant is hepatoprotective 38. The hydroalcohalic extract stimulates cell mediated immune system by increasing phagocytic function 39. Krishnakumari and Priya, 2006 40 evaluated the antihyperlipidemic effect of aqueous extract of Achyranthes aspera in experimental rats fed with diet containing sesame oil. Sandhyakumari, et al, 2002 41 reported ethanolic extract of A.aspera caused induction of reproduction in male rat. Extracts of A. aspera possess antioxidant properties and could serve as free radical inhibitors or scavenger or acting possibly as primary antioxidants. The decline in the hepatic marker shows the hepatoprotective properties against chemically (NDEA and CCl4) induced hepatocellular carcinoma 42.

Seed: Achyranthes aspera is well documented for the presence of phytoactive constituents. Reduction in rate of lipid peroxidation and enhancement in free radical scavenging activity of the herbal seed powder is due to presence of phytoactive constituent. Seeds are rich in protein, and used in night blindness and cutaneous diseases, antipyretic activity, expectorants, hepatoprotective potency or treatment of Jaundice and antioxidant activity 16, 45, 86, 87.

Different proportion (0.25%, 0.5%, and 1.0%) of raw seed and its different fraction (alcohol, petroleum ether and 50% aqueous alcohol extracts) have shown growth stimulating and immunostimulatory properties in Indian major carps 92, 93, 94. Dietary supplementation of seed enhanced the growth of fish, provided protection against oxidative stress, prevented tissue damage and also enhanced the resistance of larvae against the pathogen A. hydrophila i.e. seeds improved the overall health status of the fish.

The growth-stimulating component of Achyranthes aspera seed is ecdysterone, whereas immune stimulating effect is primarily due to essential fatty acids (EFAs). The immune stimulation is higher when EFAs (linolenic acid and oleic acid) 95 are given in combination with other constituents of the seed. This synergetic effect may be due to the nutrients present in the whole seed or it may be due to some coexisting components, which possibly increase the bioavailability of EFAs. Seeds at the 0.50% level provided protection against oxidative stress, prevented tissue damage, increased myelperoxidase activity, lysozyme activity, hemmaglutinetion antibody titre, total serum and protein, albumin and globulin levels 95. Therefore, the seeds can be made available to the aquaculture industry on a commercial scale.

FLOWER AND FRUIT: Flowers and fruits of achyranthes aspera are used for the treatment of menorrhagia and respiratory disease47, snakes and reptiles bites45.

CONCLUSION: Natural products are having a great importance in ancient traditional medicine systems. Herbs are the natural drugs used to regain the alterations made in normal physiological system by foreign organisms or by any malfunctioning of the body. From different literature and review it has been seen that plant Achyranthes aspera is a resuscitative plant due to its large number of medicinal properties and having medicinally important chemicals like ecdysterone, n-hexacos-17-enoic, spinasterol, achyranthine, betaine, pentatriaontane, hexatriacontane, tritriacontane, Hydroquinone, p-benzoquinone, spathulenol, nerol, asarone, and essential fatty acids (EFAs).

Being a weed this can prove to be an elixir to the common man. Further research can be directed at elucidating the active components as well as the pathways threw which they act.