ABSTRACT: Acridine is a heterocyclic nucleus consisting of three fused rings heterocyclic moiety and a presence of Nitrogen in the ring structure. It is used in a large number of therapeutically agents for curing ailments like antimalarial, antiseptics, abortifacient, anticancer, and so on because of its adjuvant molecule attached to it. It possesses high pharmacological properties mainly with respect to cancer cells due to the proliferation of cells at the molecular level and acts as complexes with the peptides which bind at the molecular level for protection against the proliferation of cells. Acridine nucleus thus plays a potent role in combatting the silent and deadly disease for a better healthy nation. Acridine derivatives constitute a class of compounds that are being intensively studied as potential anticancer drugs. The most well-known acridine derivatives, their pharmacological properties, action mechanisms, and outlooks for practical application are described in this article. The unique qualities of acridines are primarily attractive due to the possibility of using them for the purpose-oriented designing of drugs. Thus, acridines were used as a basis to create the specific regulatory HIV-1 elements, proliferation inhibitors of leukemia cells, and new anti-tumor drugs. The elaboration of complexes of acridine derivatives combined with peptides intercalating specifically into the DNA having big or small grooves is the most outstanding trend of acridine research.

Acridine Heterocycle: Acridine is an organic compound and a nitrogen heterocycle with the formula C13H9N. The first isolation of acridine was done in 1870, from a high boiling fraction of coal tar by Carl Grabe and Heinrich Caro in Germany 1. Acridines are substituted derivatives of the parent ring. It is a planar molecule that is structurally related to anthracene with one of the central –CH groups replaced by nitrogen 3. Acridine is mildly basic and an almost colorless solid. Acridine derivatives have been explored as DNA-binding anticancer agents.

Some derivatives show undesired pharmacokinetic properties, and still, new derivatives need to be explored. Acridines are well-known for their high cytotoxic activity. However, their clinical application is limited or even excluded because of its side effects. The cancerous cell DNA is considered as one of the main targets for anticancer drug design 2. The planar structure of acridines confers to the molecule able to bind DNA by intercalation and to interfere with metabolic processes.

Acridine is obtained from the high boiling fraction of coal tar. It is also obtained in nature from a plant and marine sources 2.

Synthesis: Many researchers had synthesized Acridine via different starting molecules with various reagents and catalyzing agents. The name of them are shown below

Berntsen Synthesis: It involves the reaction of diphenylamine with a carboxylic acid in the presence of zinc chloride, resulting in the formation of acridine 1.

Cyclization: Cyclization of  N-phenylanthranilic acid by the Magidson-Grigorowski method lead to the formation of ester (9-acridone), further to alcohol (acridine-9-ol) to yield the final product as chlorinated salt of acridine as 9-chloroacridine 3. 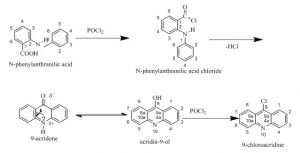 Reaction of Acrdines: The 2nd and 7th position of acridine moiety is highly suspectable to number of reactions like nucleophilic addition, electrophilic substitution, oxidation, reduction, reductive alkylation, and photoalkylation reactions. This is mainly due to the presence of unsaturation in the aromaticity and delocalization of the bonds and moving of electrons to best suit the stability of the nucleus and the attachment with other molecules or moieties 3.

Reaction of Heteroatoms: Acridine serves as a weaker base than the pyridine and quinolone moiety. Thus, it forms rapidly to acridinium salts and in the presence of N-oxidation, turns to peroxy-carboxylic acid 4.

Electrophilic Substitutions of Acridine: Acridine undergoes nitration in the presence of Concentrated nitric acid to form 2,7 dinitroanthracene which is an electrophilic substitution reaction 1.

Reactions towards Nucleophiles: Acridine shows variable regiochemistry towards nucleophiles. Reaction with NaNH2 in liquid ammonia, which leads to acridine- 9- amine (9-aminoacridine), whereas in N,N-dimethylaniline the main product formed is 9,9-biacridanyl 1.

Oxidation of Acridine: Acridine is oxidized by dichromate in presence acetic acid to yieldacridin-9(10H)-one (acridone), whereas it gets degraded by permanganate in alkaline medium forming quinoline- 2,3-dicarboxylic acid 1.

Reductive Alkylation: Acridine on reaction with n-pentanoic acid, in the presence of ultraviolet light, gives 9-n-butylacridine 1.

Photoalkylation: In the presence of ultraviolet light, N-methylacridine hydrochloride reacts with methanol to give 10-methyl-9,10-dihydroacridin-9-yl-methanol 1.

Pharmacological Importance: It plays an important role in various medicines. A number of therapeutic agents are based on acridine nucleus such as quinacrine (antimalarial), acriflavine, and proflavine (antiseptics), ethacridine (abortifacient), amsacrine and nitracine (anticancer), and tacrine.

Anticancer Derivative: Cancer is one of the major health and social-economic problems despite considerable progress in its early diagnosis and treatment. Cytotoxic drugs work by interfering with DNA replication. Since the cancer cells are rapidly dividing so they rapidly synthesize new DNA- and if this is damaged the cell will die 1. There are three main groups of molecules that can be used to interfere with DNA replication-Antimetabolites: they are molecules that appear to be as nucleotides. Alkylating agents: those are molecules that permanently attach to the DNA, distorting its shape 1. Unfortunately, these also attach to many other molecules in cells. DNA-binding agents: molecules that attach to the DNA chain break it, disengage from the chain, and then attach to another chain to repeat the process. These usually function in conjunction with an enzyme 2.

Owing to the emergence and increase of multidrug resistance to various conventional drugs and the continuing importance on healthcare expenditure, many researchers have focused on developing novel and effective anticancer compounds.

Acridine as an Anticancer Derivative: DNA is considered as one of the main targets for anticancer drug design. The planar structure of acridines confers to the molecules the ability to bind DNA by intercalation and, therefore, to interfere with the metabolic process. A large number of natural alkaloids and synthetic acridine derivatives have been tested as anticancer agents 1.

Owing to the versatile chemotherapeutic activities of acridine, a significant amount of research activity has been directed toward this class in recent years, which is as below. 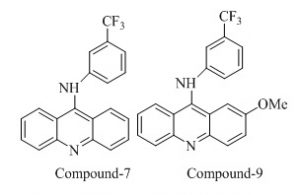 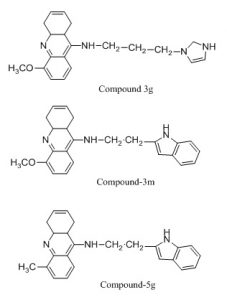 Luan X et al., in 2011 reported a series of novel  acridine derivatives as a multi-target VEGFR-2 and Src kinase inhibitors,  compound (7r) showed low µM activity against K562 and HepG-2 cancer cell-lines, and inhibited VEGFR-2 and Src at inhibition rates of 44% and 8% at 50 µM, respectively, without inhibition of topoisomerase 6. 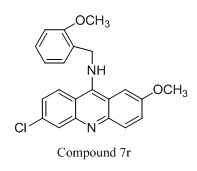 Kalirajan R et al., in 2012 reported 9-anilino-acridines substituted with oxazine derivatives. Among these agents, compounds 5a, 5h, 5i, 5j were the most cytotoxic with CTC50 value of 140e250 mg/mL. The docking studies of the synthesized compounds were performed towards the key Topoisomerase II (1QZR) by using Schrodinger Maestroactivity as topoisomerase II inhibitors 7. 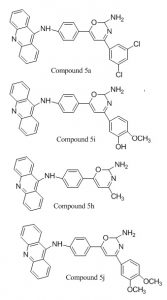 Francis WA Barros et al., in 2012 reported novel hybrid 5-acridin-9-ylmethylene-3-benzyl-thiazoli-dine-2,4-diones as a tumor suppressor agents and the structure of compound is as below 8.

Xuliang Lang et al., in 2013 prepared some Novel synthetic acridine derivatives by analogues were synthesized by modifying previously unexplored linkers between the acridine and benzene groups and their antiproliferative activity and the DNA-binding ability were evaluated. Among these derivatives, compound 5c demonstrated DNA-binding capability and topoisomerase I inhibitory activity. In K562 cell lines, 5c induced apoptosis through mitochondria-dependent intrinsic pathways. as potent DNA-binding and apoptosis-inducing antitumor agent 10. 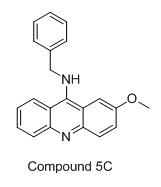 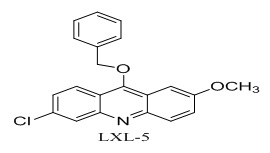 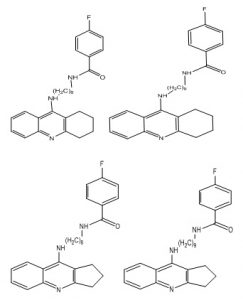 Li D et al., in 2017 reported a series of novel azaacridine derivatives were synthesized as DNA and topoisomerases binding agents, among which compound 9 displayed the best antiproliferative activity with an IC50 value of 0.57 µM against U937 cells 13. 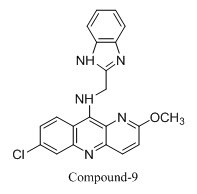 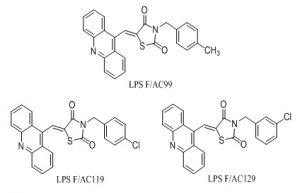 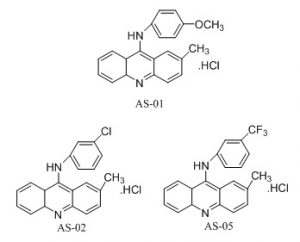 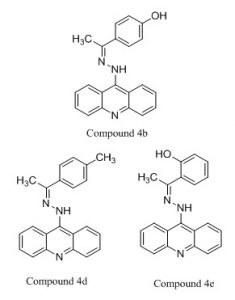 Zhang B et al., in 2019 synthesized N-phenylbenzamide- 4- methylamine acridine derivatives as a potential topoisomerase I/II and apoptosis-inducing agents, among them compound 9b effectively inhibited the activity of Topo I/II and induced DNA damage in CCRF-CEM cells and, moreover, significantly induced cell apoptosis in a concentration-dependent manner 18. 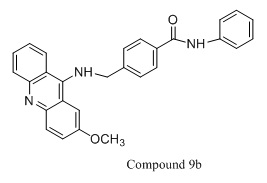 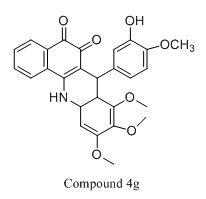 CONCLUSION: By reviewing the novel acridine derivatives it is clearly seen that the particular heterocycle has a diverse and varied capacity to be a capable neoplastic agent treating various targeting cells of cancer, Acridine with its effective activity and Capability to combine with other heterocycles can easily be used to prepare and synthesis various neoplastic derivatives. Acridine orange and acridione derivatives were also found to be potent antitumor agents and hybrid derivatives of the heterocycle and capacity to affect various cell line, which can be effective against versatile anticancer agents. From the resources, it is very much clear and static that cancer cells grow in their own pattern, and they proliferate according to the division of cell growth. Thus still, it becomes of utmost need to search for a lead compound or molecule which can counteract or stop the mechanism of proliferation at early or divided stages of growth. So, acridine and their derivatives will be beneficial in this aspect, which can serve as a potent anticancer agents.

ACKNOWLEDGEMENT: I profusely thankful to Dr. G. S. Chakraborthy, Principal of Parul Institute of Pharmacy and research, Parul University for the valuable suggestion, guidance, and support.