Actinidia deliciosa (A. Chev.) C. F. Liang et A. R. Ferguson is a sub-family of the genus Actinidia, which is also known as Chinese gooseberry, kiwifruit, yangtao, etc. in China, and consists of 55–60 species. The genus Actinidia is a dioecious plant and is widely distributed on the Asian continent. It is also native to China and most of the species are cultured in the southwest of China. Out of all species, only A. deliciosa is intensely cultivated all over the world. In addition, the fruit of Actinidia deliciosa has been acclaimed for its native and medicinal values. It contains several phytoconstituents belonging to category of triterpenoids, flavonoids, phenylpropanoids, quinones and steroids. The roots of Actinidia deliciosa has been used as a traditional drug in China for a long time and are reported as Chinese folk remedy for various diseases, such as hepatitis, pyorrhea,  gingivitis, edema, rheumatoid arthritis, and also various forms of cancer. Kiwi fruit has been used as mild laxative and a rich source of Vitamins. The fruits, stems and roots are diuretic, febrifuge and sedative. The seeds are used as natural blood thinner.

Actinidia deliciosa has thereby recently acquired interest due to its attractive potential application in indigenous drugs.

INTRODUCTION: The kiwi fruit, often shortened to kiwi in many parts of the world, is the edibleberry of a cultivar group of the woody vine Actinidia deliciosa and hybrids between this and other species in the genus Actinidia. The Actinidia is native to North East Asia, particularly South China.

The most common cultivars of kiwifruit are oval, about the size of a large hen's egg (5–8 cm / 2–3 in long and 4.5–5.5 cm / 1¾–2 in diameter). It has a fibrous, dull brown-green skin and bright green or golden flesh with rows of tiny, black, edible seeds. The fruit has a soft texture and a unique flavour, is a commercial crop in several countries, mainly in Italy, China, and New Zealand 1.

Also known as the Chinese gooseberry, the fruit was renamed for export marketing reasons in the 1950s; briefly to melonette, and then by New Zealand exporters to kiwi fruit. This latter name comes from thekiwi — a brown flightless bird and New Zealand's national symbol, and also a colloquial name for the New Zealand people 1.

Botanical Description: Actinidia deliciosa is assigned under systematic scientific classification based on its taxonomical status as shown in Table 1 2.

History: The history of Actinidia deliciosa traces from 1847. The specimens of the plant were collected by the agent for the Royal Horticultural Society, London. Cultivation spread from China in the early 20th century when seeds were introduced to New Zealand by Isabel Fraser, the principal of Wanganui Girls' College, who had been visiting mission schools in Yichang, China. The seeds were planted in 1906 by a Wanganui nurseryman, Alexander Allison, with the vines first fruiting in 1910.

The familiar cultivar Actinidia deliciosa 'Hayward' was developed by Hayward Wright in Avondale, New Zealand around 1924. This is the most widely grown cultivar in the world. Chinese Gooseberry was initially grown in domestic gardens, but commercial planting began in the 1940s.

In 1959, Turners and Growers named it, Kiwifruit, after New Zealand's national bird, the kiwi - brown and furry.1, 3

Distributional Range: Italy is now the leading producer of kiwifruit in the world, followed by New Zealand, Chile, France, Greece, Japan and the United States. Kiwifruit is still produced in its birthplace China. In China, it is grown mainly in the mountainous area upstream of the Yangtze River. It is also grown in other areas of China, including Sichuan.

Actinidia deliciosa is native to southern China. Originally known as yang tao, it is declared as the "National Fruit" of the People's Republic of China. Other species of Actinidia are also found in India and Japan and north into southeastern Siberia.

The kiwifruit is native to the Yangtze River valley of northern China and Zhejiang Province on the coast of eastern China. Kiwifruit is also grown commercially in New Zealand, California, Italy, South Africa and Chile 1, 3.

Growth Habit: In the forests where it is native, the plant is a vigorous, woody, twining vine (liana) or climbing shrub. It is not unusual for a healthy vine to cover an area 10 to 15 feet wide, 18 to 24 feet long and 9 to 12 feet high. In cultivation it is supported on a trellising system. Actinidia deliciosa is borne on a vigorous, woody, twining vine or climbing shrub reaching 9 m.

Growing Environment: Actinidia deliciosa grows in well drained soil. Fruiting occurs on mature growth (at least a year old), and slows on old wood (over 3 years). Plants are male or female, so cross pollination is necessary for fruit set. For backyard culture, it can be common to grow several vines together in a clump in order to ensure both sexes. Sex can be determined once plants mature and begin flowering 1, 3.

Flowers:  The flowers are fragrant, dioecious or bisexual, borne singly or in 3's in the leaf axils, are 5- to 6-petalled, white at first, changing to buff-yellow, 2.5-5 cm broad, and both sexes have central tufts of many stamens though those of the female flowers with no viable pollen. The flowers also lack nectar. It flowers in November. Male and female flowers appear on different plants (dioecious) and both sexes have to be planted in close proximity for fruit set. Bees are usually used by commercial orchards, although the more labour intensive hand pollination is sometimes employed. Male flowers are gathered and processed to extract their pollen. This is then sprayed back on to the female flowers 1, 3.

Fruit: The oval, ovoid or oblong fruit is up to 2-2½ inches long, with russet-brown skin densely covered with short, stiff brown hairs. The flesh, firm until fully ripe, is glistening, bright green or sometimes yellow, brownish or off-white, except for the white, succulent center from which radiate many fine, pale lines. Between these lines are scattered minute dark-purple or nearly black seeds, unnoticeable in eating. The flavor is sweet, tart to acid.1,3

Sex Determination 1, 3: Differences in anatomy and morphology of the kiwi fruit leaves and leaf petioles might play a considerable role in the sex-determination. Three months after bud break (June), the kiwi fruit leaves of both male and female plants, grown on the vegetative and generative shoots showed different leaf area (128.6 ± 13.45 cm2 in male and 104.5 ± 4.02 cm2 in female plants) and shape. The most frequently leaf shape was determined as "folium cordatum" and "folium rotundato-cordatum".

Anomocytic stomata in hypostomatic leaves were found. The reticulate venation appears to be the main type of leaf venation. Stalked stellate multicellular trichomes on the abaxial leaf side were frequently observed in the leaves of both sexes. No important differences between male and female plants were found in the structures of vascular system in leaves and leaf petioles. Thus leaf thickness and surface morphology of adaxial leaf epidermis can be considered as important structural parameters in the sex determination.

There are 4 main Chinese classes of kiwifruit:

Varieties and Cultivars: There are two botanical varieties:

are 4 main cultivars of this species in China. Abbott, Allison, Bruno, Hayward, Monty (Montgomery) and Greensill are the most significant cultivars in New Zealand.

TABLE 2: CHEMICAL STRUCTURE AND MOLECULAR FORMULAE OF SOME PHYTOCONSTITUENTS OF ACTINIDIA DELICIOSA 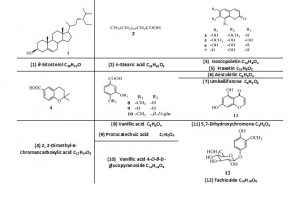 The flavor of kiwi fruit [Actinidia deliciosa (A Chev) Liang et Ferguson Var. deliciosa cv. Hayward] appears to be a subtle blend of several volatile components. The fruit softens considerably during ripening, which produces a large number of volatile compounds 5, 7, 8, 9, 10.

Traditional Uses: It has been reported that folk remedy for adult diseases, such as potent anti-hepatotoxic, anti-pyorrheal and gingival inflammation, was observed in the roots of Actinidia deliciosa.11

The genus Actinidia (Actinidiaceae) are widely used in Chinese folk medicines to treat such diseases as hepatitis, edema, rheumatoid arthritis, gastric cancer and breast cancer etc 12. Actinidia deliciosa is distributed in west China, and showed to have anti-tumor and protective effects on acute hepatic injury in biological arrays 13, 14, 15, 16, 17.

Kiwi fruit is often reported to have mild laxative effects, due to its significant levels of dietary fiber 18.

Kiwi fruit is a natural source of carotenoids, such as provitamin A beta-carotene,20 lutein and zeaxanthin 21.

The fruits, stems and roots are diuretic, febrifuge and sedative 22. They are used in the treatment of stones in the urinary tract, rheumatoid arthralgia, cancers of the liver and oesophagus 22.

Usually Actinidia deliciosa is eaten fresh; however it can also used in beverages, desserts, and as a flavoring. The fruits are very high in vitamin C, along with containing vitamins A and E, also it contains considerable potassium 22.

Sliced kiwifruit has long been regularly used as a garnish atop whipped cream on New Zealand's national dessert, the Pavlova. It can also be used in curry 23.

Apart from this, Actinidia deliciosa is also good source ofDietary fiber, Protein, Calcium, Iron, various Vitamins like Thiamine (Vitamin B1), Riboflavin (Vitamin B2),  Niacin (Vitamin B3), Vitamin B6, Folate (Vitamin B9), Vitamin E, Vitamin K. The Nutritional value 3 per 100 g is given in Table 3.

Precautions: Raw kiwi fruit is also rich in the protein-dissolving enzyme actinidin, (in the same family of thiol proteases as papain), which is commercially useful as a meat tenderizer, but can be an allergen for some individuals. Specifically, people allergic to latex, bananas, papayas or pineapples are likely to also be allergic to kiwi fruit 24.

The fruit also contains calcium oxalate crystals in the form of raphides. Reactions to these chemicals include sweating, tingling and sore mouth or throat; swelling of the lips, tongue and face; rash; vomiting and abdominal pain, heartburn; and, in the most severe cases, breathing difficulties, wheezing and collapse.

Actinidin also makes raw kiwifruit unsuitable for use in desserts containing milk or any other dairy products which are not going to be served within hours, because the enzyme soon begins to digest milk proteins. This applies to gelatin-based desserts as well, as the actinidin will dissolve the collagen proteins in gelatin very quickly, either liquifying the dessert, or preventing it from solidifying 24.

CONCLUSION: From the time immemorial, plants have been widely used as curative agents for variety of ailments. Concentrated fruits or seed extract can be found in various herbal preparations are widely available in market today.

Kiwifruit is a natural source of carotenoids, such as provitamin A beta-carotene, lutein and zeaxanthin. The fruits are very high in vitamin C, along with containing vitamins A and E, plus considerable potassium.

Actinidia deliciosa is a rich source of vitamin C. It also contains vitamin E and a small amount of vitamin A.