ABSTRACT: Lycopersicon esculentum leaves had traditionally been used to stimulate hair growth in Lampung Pesisir tribes, Tanggamus Regency, Lampung, Indonesia. This study aimed to examine the active compounds from the n-hexane L. esculentum leaves. The study based on our previous research showing that the n-hexane had hair growth stimulating effects. The study started with sample collection, extracted by maceration, fractionated using liquid-liquid extraction (LLE) with water, n-hexane and ethyl acetate with a ratio of 1: 1. Isolation of compounds in n-hexane fraction was done by vacuum liquid chromatography (VLC) method using gradient polarity of chloroform: methanol resulting in a subfraction forming a crystal. The crystal was checked by two ways TLC. The obtained pure crystal was then identified with FTIR, LC-MS, and NMR. The identification of the active compound isolates from the n-hexane isolates contained a class of triterpenoid compounds, namely cycloartenol compounds with the molecular formula C30H50O, m/z 425, 3783 with the name IUPAC 9 beta, 19-cyclo-24-lanostane-3beta-ol, (3beta) -9, 19-Cyclolanost-24-en-3-ol. The chemical compound content of n-hexane fraction of L. esculentum leaves with possibly causing anti-alopecia was the cycloartenol compound with the formula of C30H50O. Further verification determination is suggested to compare this compound to the minoxidil compound, either by in-silico or in-vivo analysis.

Young fruit has a bitter and flavorful taste because it still contains lycopersin in the form of mucus. The unpleasant aroma will disappear by itself when the fruit enters the ripening phase until it ripens. It will also turn into a slightly sour sweetness that characterizes the taste of the potpourri.

In the general public, the potpourri is only made as a vegetable without any more use, like flour, for example, an alternative food source can be made considering that the nutrition it contains is quite complex, even though the fruit after harvest will be damaged between 20% and 50% after harvest 5. Lycopene from tomatoes 6 including L. esculentum fruit can inhibit the growth of endometrial cancer, breast cancer, and lung cancer in cell cultures with higher activity compared to α and β-carotene 7. Lycopene as a carotenoid provides radioprotectant and antioxidant effects by quenching radiation-induced free radical singlet oxygen 8. Tomato leaves contain toxic glycoalkaloids which if consumed by humans in large quantities can cause difficulty breathing, nausea, vomiting, so people are reluctant to use it 9. In addition to the mineral content, tomatoes also contain peroxidase enzymes obtained from fruit, leaves and stem tissue from tomatoes 10. Tomato leaves contain peroxidase, and together with H2O2, these compounds can be converted into hypothiocyanite (OSCN-) which has antimicrobial activity 11. This compound can be used as an alternative as a food preservative by using it as an antimicrobial agent.

Lampung Pesisir tribe, Lampung Province, West Indonesia traditionally uses Lycopersicon esculentum Mill leaves. They call it as Rampai leaves as fertilizer for crushed hair, applied to the scalp twice a day 12. Previously, we reported a research article called in-vivo hair growth stimulating the activity of ethanol extract and its fractions from Rampai Lampung (Lycopersicon esculentum Mill.) leaves and found that n-hexane fraction had growth hair activity better than other fractions compared to minoxidil as a positive control 13. This study reports scientific data and information about the compounds contained in the L. esculentumn-hexane fraction to search for an anti-alopecia compound. So far in the pharmacological handling of baldness, the Food and Drug Administration (FDA) only allows two drugs, minoxidil, and finasteride 14, 15.

Extraction of the L. esculentum Leaves: The extraction of the rampai leaves was maceration method refers to the existing standard method 16, 17. The rampai leaves were incorporated into a cotton-coated macerator, 70% ethanol added to all crushed and dried sample for 3 × 24 h while stirring occasionally. The extract was then evaporated and concentrated by a rotatory evaporator at 60 °C until the solvent evaporated almost entirely, then the extract was stored on the vapor plate and thickened over the water bath until a concentrated extract was obtained.

Vacuum Liquid Chromatography (VLC): VLC was used to separate and isolate desired fractions. The fractional water fraction was introduced into the VLC column and eluted with methanol: chloroform mixture with multilevel polarization. Each sub-fraction was tested by TLC with a suitable developer to obtain a spot. The TLC used a stationary phase of silica gel GF254 and its mobile phase of chloroform: methanol with a variation. The VLC method was guided by Indonesian Herbal Pharmacopoeia 22.

Purification and Purity Isolate Test: Purification was done by re-crystallization using methanol. The crystals contained in the vials were dissolved with methanol, and the exterior of the vial was soaked in warm water with a temperature range below 40 °C while rocking slowly. Then, directly inserted into cold water, not to be submerged or water went into the vial. The isolate purity was tested by using two-way TLC. The stationary phase was used in the form of silica gel 60 with two different mobile phase systems.

Our previous report 13 discussed and stated that the difference in the results of the phytochemical screening, was probably due to differences in plant origin.

Vacuum Liquid Chromatography (VLC) Results: VLC was chosen as one of the fraction initial separation methods due to the effectiveness of fraction separation and faster time compared to ordinary chromatography. With the help of a vacuum, the pressure in the chromatographic system was lower than the pressure of the surrounding environment so that the eluent was more quickly pushed out of the column and the elution process runs faster. The principle of VLC was almost the same as other chromatography, ie compounds with a higher level of polarity would be bonded or held longer for the stationary phase of the silica gel G60. Compounds with lower levels of polarity would elute first so that the separation of these compounds could occur based on polarity. To cover the polarity, two types of eluents were applied (see Table 2), so 21 subfractions were obtained.

TABLE 2: COMPARISON OF ELUENTS IN VLC

Each subtraction was examined TLC by eluent n-hexane and ethyl acetate (9: 1). The same spots were then collected using spotting appearance in the form of Detection (a) visible light, (b) UV light λ 254 nm, and (c) UV λ 366 nm, 10% H2SO4 spray reagent.

Re-crystallization: The results of the re-crystallization were obtained by white deposits which were then re-checked by TLC. The crystal was analyzed by physical and instruments.

UV-Vis spectrometry was used to measure obtained white amorph crystal based on wavelength to determine electron absorbance and transition 23. The identification was carried out by UV-Vis spectrophotometry at a wavelength of 200-500 nm, with a concentration of 100 ppm which was as much as 1 mg in 10 ml of methanol. The results of the UV spectrum of the isolated compounds showed that there were two maximum absorbances which appeared, namely at 223 and 272 nm. The wavelength that appeared on 223 and 273 uptakes was the wavelength originating from the chromophore ethylene band caused by an electronic transition π → π * in the side chain. It was known that the maximum wavelength at 278 nm with an absorbance of 0.2888, it was known that the extension coefficient (ε) was 1,224.51 so that compounds with the molecular formula C30H50O had a double bond. To find out the number of double bonds possessed by compounds of the crystal could be calculated using the formula:

From the calculations with the above formula, it was known that the number of double bonds of C30H50O compounds was as many as 6 pieces.

Infra-Red (IR) Spectrometry: Infrared spectroscopy was chosen because it could determine the functional groups of a compound by determining the atomic vibrations of a molecule at each wavenumber 23. The results of the IR spectrum of the obtained crystal can be seen in Table 3 and Fig. 1. 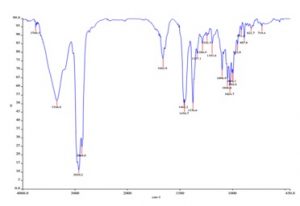 FIG. 1: IR-SPECTRA OF THE OBTAINED CRYSTAL 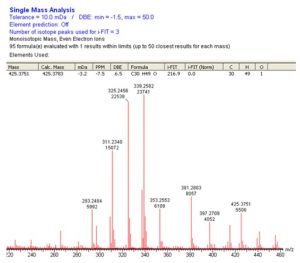 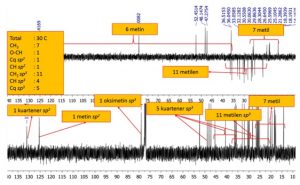 B. DEPT: Based on the results of the 13C-NMR spectrum measurements in Fig. 3, it could be observed that there were seven methyl carbons, eleven methylene carbon, six methine carbon and six carbon quaternary. So that the isolate consisted of carbon atoms that number thirty carbon, fifty hydrogens where one hydrogen comes from hydroxyl and 1 oxygen which was a typical framework of triterpenoid compounds in the cycloartane group 28.

The following data on chemical shift 1H-NMR and 13C-NMR isolate compounds are shown in Table 4. To strengthen the suspicion of the structure of the isolated compound, further literature studies were carried out by comparing data with analogous compounds with similar frameworks. The chemical shift data of this obtained crystal was compared with the Cycloartenol compound 29. 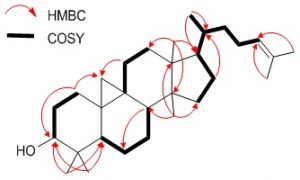 FIG. 4: STRUCTURE AND CORRELATION OF HMBC AND 1H-1H COSY OF OBTAINED CRYSTAL/ CYCLOARTENOL

Our investigation has led to the isolation of triterpenoid compounds namely cycloartenol. This result enriches the chemical constituents of L. esculentum leaves.