ABSTRACT: Benign Prostatic Hyperplasia (BPH) is a common progressive disease among men, with an incidence that is high among elderly.  Velvanga parpam (VP) has been employed as traditional remedy for Benign Prostatic Hyperplasia (BPH) which is a herbo mineral formulation. As a mandate, steps were taken to evaluate safety profile of VP in rats and mice following OECD guidelines. Acute toxicity studies, different doses of VP were administered orally to rats once daily for one week. Sub-acute toxicity studies were carried in four different groups in which VP was administrated orally to rats once daily for 28 days in various doses ranging from 2.5, 5, 10 Mg/kg for mice respectively. Detailed hematological, biochemical, necropsy and histopathological evaluation of organs was performed for all animals. The VP was well tolerated and no toxic manifestations were seen in any animal. Histopathological analysis revealed that Spleen, Testes, Pancreas, Lung, Liver, Brain, Heart, Stomach, Intestine, Bone, Ovary, and Kidney tissues of treated groups did not show any signs of toxicity. Mortality observed in highdose. The VP was found to be safe in animals. No toxic effect was observed up to 5mg/kg of Velvanga parpam in acute and sub-acute toxicity studies

INTRODUCTION:Benign Prostatic Hyperplasia (BPH) is a common progressive disease among men, with an incidence that is high among elderly. Histological BPH, which typically develops after the age of 40 years, ranges in prevalence from 50% at 60 years to as high as 90% by 85 years of age 1-3.

BPH may also result from the proliferation of epithelial and stromal cells, and may further contribute to constriction of the urethra, leading to bladder outlet obstruction 4, 5.

In the recent years, complementary and alternative medicine (CAM) has upsurge globally for the treatment and prevention of many aliments which are non-communicable and chronic in nature 7.The interventional drug Velvanga Parpam (VP) has been quoted by Veeramamunivar Vagada Thirattu for the treatment of Ukkara soolai (BPH) 8, 9.

The pre-clinical toxicity studies are essential for determining a safe dose for humantrials 10. Consequently an effort was made to evaluate acute and sub-acute toxicity of herbo-mineral siddha formulation of Velvanga Parpam in laboratory animals.

a)      Ingredients: The siddha medicine VP has the ingredients of velvangam (Tin), kattrazhai (Alove vera) and muttaiodu (The egg shell) 8.

b)      Procedure: Velvangam is taken in an iron bowl and powder of egg shell is poured on the melted velvangam and stirs it thoroughly until the velvangam completely merge. Add juice of aloe vera and grind it for 12 hours (4 samam) and keep it in calcinations process 8.

Aim: Aim of the study is to evaluate the acute and sub-acute toxicity of the siddha drug ‘Velvanga Parpam’.

Animals: Mice of either sex weighing 25-30g and rats weighing 210-240g were obtained from the animal house of Vel’s University. The animals were used with the approval of the Institute animal ethics committee (IAEC) and obtained from Vel’s University, Chennai-117 on 11.08.2012 bearing no. (VP) (XIII/VELS/PCOL/22/2000/CPCSEA/IAEC). They were fed with a balanced standard pellet diet and maintained under standard laboratory conditions, providing 24-280C temperature, standard light cycle (12 h light, 12 h dark) and water ad libitum.

Acute Toxicity Study-OECD 425 guidelines 11:Acute oral toxicity test for the Velvanga Parpam was carried out as per OECD Guidelines 425. As with other sequential test designs, care was taken to ensure that animals are available in the appropriate size and age range for the entire study. The test substance is administered in a single dose by gavage using a stomach tube or a suitable intubation cannula.

The fasted body weight of each animal is determined and the dose is calculated according to the body weight. After the substance has been administered, food was withheld for a further 2 hours in mice.

Treatment of an animal at the next dose was delayed until one is confident of survival of the previously dosed animal. General behavior, respiratory pattern, cardiovascular signs, motor activities, reflexes, change in skin and fur, mortality and the body weight changes were monitored daily. The time of onset, intensity and duration of these signs, if any, were recorded 12, 13.

Sub-Acute Toxicity: In a 28-days, sub-acute toxicity study, twenty four either sex (3+3) rats were divided into four groups of 6 rats each. Group I that served as normal control was administered with distilled water (p.o.) while groups II, III and IV were administered daily with the Velvanga Parpam (p.o.) for 28 days at a dose of 2.5, 5.0 and 10mg/kg respectively.

The animals were then observed daily for gross behavioral changes and any other signs of sub-acute toxicity [Table 1]. The weight of each rat was recorded on day 0 and weekly throughout the course of the study [Table 2], food and water consumption per rat was calculated [Table 3 & 4].

At the end of the 28 days they were fasted overnight, each animal was anaesthetized with diethyl ether, following which they were then dissected and blood samples were obtained by cardiac puncture into heparinized tubes. The blood sample collected from each rat was centrifuged with 3000 X g at 4oC for 10 min to separate the serum and used for the biochemical assays.

Necropsy: All rats were sacrificed after the blood collection. The positions, shapes, sizes and colors of internal organs were evaluated. The spleen, testes, pancreas, lung, liver, brain, heart, stomach, intestine, bone, ovary and kidney tissues were excised from all rats to visually detect gross lesions, and weighed to determine relative organs’ weights and preserved in 10% neutral formalin for Histopathological assessment [Table 10]. The tissues were embedded in paraffin, and then sectioned, stained with haematoxylin and eosin and were examined microscopically [Figure-1, 2, 3 & 4].

TABLE 10: EFFECT OF ORAL ADMINISTRATION OF A VELVANGA PARPAM ON ORGAN WEIGHT 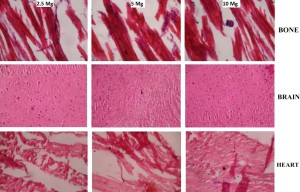 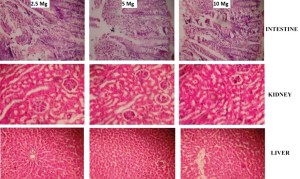 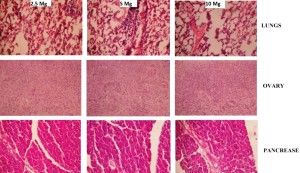 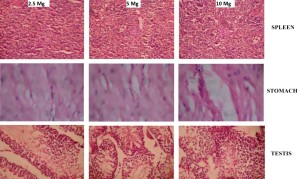 Food consumption of control and treated animals was found to be comparable throughout the dosing period of 28days. Ophthalmoscopic examination, conducted prior to and at the end of dosing period on animals from control and all the treated dose groups did not reveal any abnormality. The results of haematological investigations revealed following significant changes in the values of different parameters investigated when compared with those of respective controls; however, the increase or decrease in the values obtained was within normal biological and laboratory limits.

A slight decrease in total RBC count values were obtained for animals in the dose group of 2.5 and 5mg/kg (P<0.05). Decreased values of platelets (P<0.05) were observed for animals in dose groups administered 5-10mg/ kg body weight of Velvanga Parpam sacrificed on day 28. Results of Biochemical investigations conducted on days 28 and revealed the following significant changes in the values of different parameters studied when compared with those of respective controls; however, the values obtained were within normal biological and laboratory limits.

Protein level is elevated in animals of 2.5 and 5mg/kg dose group (P<0.05). Aspartate Amino transferase levels slightly decreased in animals of 5 and 10mg/kg group (P<0.01). 8) Functional observation tests conducted at termination revealed no abnormalities. Urine analysis, conducted at the end of the dosing period in week 4 revealed no abnormality attributable to the treatment.

CONCLUSION: Based on these findings, no toxic effect was observed upto 5mg/kg of Velvanga Parpam on oral route over a period of 28 days. So, it can be concluded that the Velvanga Parpam can be prescribed for therapeutic use in human with the dosage recommendations of upto 5mg/kg body weight p.o.