ABSTRACT: Herbal medicines have been broadly used in developed countries hence they are natural and comparatively safe. They contain plant materials as their pharmacologically active components. Infertility is one of the most extremely tragic all over the world. Despite recent advances in the treatment of male infertility, the problem has not been satisfactorily tackled. The male infertility is mainly due to an inadequate number of spermatozoa in the semen, the failure of the spermatozoa to move with sufficient vigor towards their goal. Aim of the study is to evaluate the acute and sub-acute toxicity of the spermatogenic siddha drug Isappukol Chooranam (IC) (siddha drug).For acute studies, different doses of IC were administered orally to rats once daily for one week. Forsub-acute studies, different doses of IC were administered orally to rats once daily for 28 days in various doses at 50,100,200 mg/kg of body weight. Detailed hematological, biochemical, necropsy and Histopathological evaluation of organs was performed for all animals. Histopathological analysis revealed that Spleen, Testes, Pancreas, Lung, Liver, Brain, Heart, Stomach, Intestine, Bone, Ovary, and Kidney tissues of treated groups did not show any signs of toxicity. No impairment in hepatic, renal, haemopoietic functions were observed throughout the study. No mortality was observed up to 200 mg/kg of body weight in acute and sub-acute toxicity studies.

INTRODUCTION:Worldwide use of complementary and alternative medicines, including herbal products for various health benefits, has recently increased 1, 2. Infertility is the failure of a couple to conceive a pregnancy after trying to do so for at least one full year. Approximately 20% of couples struggle with infertility at any given time.

Infertility has increased as a problem over the last 30 years 3. Male reproductive health has social and psychological impact on normal life 4. Male infertility is commonly due to deficiencies in the semen and semen quality is used as a surrogate measure of male fecundity 5.

Male reproductive medicine and surgery remains one of the most actively evolving areas in urology, with a variety of therapeutic modalities under investigation 6. Conventional treatment for infertility usually involves invasive and, expensive procedures. There are many alternative treatments available that can increase the chance of conception 7. Herbs have been in use since long time to treat various diseases 8.

However, many issues related to a lack of scientific evidence about the efficacy and safety of herbal remedies remainsunresolved 9, 10.

Pre-clinical toxicity studies are essential to determining a safe dose for human trial 11. Prior to the initiation of human clinical trials of novel drugs, the safety of their application is to be proved. Generally this is accomplished by the implementation of general preclinical toxicity experiments to uncover potential poisonous effects of any drug in animals 12.

The present study was conducted to evaluate the acute and sub-acute toxicity of the siddha drug ‘Isappukol Chooranam’. The interventional drug Isappukol Chooranam has been quoted by Koshayi Anuboga Vaithiya Brahma Ragasiyam for Aan maladu. The drug is chosen for the treatment of Aanmaladu (Male Infertility) quoted by Yugi Muni 13. This report aims to provide vital information about the efficacy and safety of the siddha drug “Isappukol Chooranam”. Adjutants of natural sources like Psyllium husk are preferred over synthetics materials due to their non-toxicity, low cost, ease of availability, high affinity of water (swelling index is about 20 times in volume), chemically inert & purely mechanical action in the Alimentary canal and the body do not assimilate this 14.

Hygrophila auriculata extract showed no signs of acute toxicity as evidenced by the absence of mortality or visible adverse effects in the animals during the study period. Nomacroscopic alterations were noted in theviscera of the treated rats 15. Butprolonged use of Myristica fragrans at high doses (400-500 mg/kg) could be very toxic to the studied organs 16.

Aim: Aim of the study is to evaluate the acute and sub-acute toxicity of the siddha drug ‘Isappukol Chooranam’.

Animals: Mice of either sex weighing 25-30g and rats weighing 210-240g were obtained from the animal house of Vel’s University. All experimental procedures described were reviewed and approved by the Institutional Animal Ethical Committee of Vel’s College of Pharmacy, Chennai-117 on 11.08.2012 bearing no. (XIII/VELS/PCOL/27/ 2000/CPCSEA/IAEC/08.08.2012). They were fed with a balanced standard pellet diet and maintained under standard laboratory conditions, providing 24-28oC temperature, standard light cycle (12 h light, 12 h dark) and water ad libitum.

Acute toxicity study-OECD 425 guidelines 17: Acute oral toxicity test for the Isappukol Chooranam was carried out as per OECD Guidelines 425. As with other sequential test designs, care was taken to ensure that animals are available in the appropriate size and age range for the entire study. The test substance is administered in a single dose by gavage using a stomach tube or a suitable intubation cannula. The fasted body weight of each animal is determined and the dose is calculated according to the body weight. After the substance has been administered, food was withheld for a further 2 hours in mice.

Treatment of an animal at the next dose was delayed until one is confident of survival of the previously dosed animal.

Observation of toxicity signs: General behavior, respiratory pattern, cardiovascular signs, motor activities, reflexes, change in skin and fur, mortality and the body weight changes were monitored daily. The time of onset, intensity, and duration of these signs, if any, was recorded 18, 19.

Sub-Acute Toxicity:  In 28-days sub-acute toxicity study, twenty four either sex rats were divided into four groups of 6 rats each. Group I that served as normal control was administered with distilled water (p.o.) while groups II, III and IV were administered daily with the Isappukol Chooranam (p.o.) for 28 days at a dose of 50, 100 and 200mg/kg respectively. The animals were then observed daily for gross behavioral changes and any other signs of sub-acutetoxicity [Table 1]. The weight of each rat was recorded on day 0 and weekly throughout the course of the study [Table 2], food and water consumption per rat was calculated [Table 3 & 4]. At the end of the 28 days they were fasted overnight, each animal was anaesthetized with diethyl ether, following which they were then dissected and blood samples were obtained by cardiac puncture into heparinized tubes. The blood sample collected from each rat was centrifuged with 3000 X g at 40oC for 10 min to separate the serum and used for the biochemical assays.

TABLE 5/: HEMATOLOGICAL PARAMETERS AFTER 28DAYS TREATMENT WITH IC IN RATS

Necropsy: All rats were sacrificed after the blood collection. The positions, shapes, sizes and colors of internal organs were evaluated. The Spleen, Testes, Pancreas, Lung, Liver, Brain, Heart, Stomach, Intestine, Bone, Ovary, and Kidney tissues were excised from all rats to visually detect gross lesions, and weighed to determine relative organs’ weights and preserved in 10% neutral formalin for histopathological assessment [Table 10]. The tissues were embedded in paraffin, and then sectioned, stained with haematoxylin and eosin and were examined microscopically [Figure-1, 2, 3 & 4]. 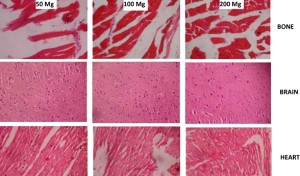 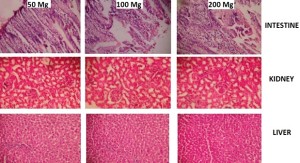 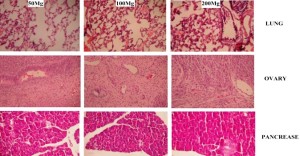 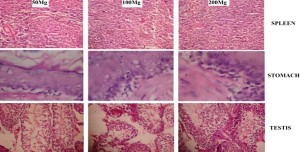 1)      All the animals in both control and the dose treated groups up to 200 mg/kg survived throughout the dosing period of 28 days.

2)      No signs of major or significant intoxication were observed in animals from lower to higher dose groups during the dosing period of 28 days.

3)      Animals from all the treated dose groups exhibited comparable body weight gain with that of controls throughout the dosing period of 28 days.

4)      Food consumption of control and treated animals was found to be comparable throughout the dosing period of 28days.

5)      Ophthalmoscopic examination, conducted prior to and at the end of dosing period on animals from control and all the treated dose groups did not reveal any abnormality.

6)      Hematological analysis conducted at the end of the dosing period on day 28, revealed no significant abnormalities attributable to the treatment.

7)       Biochemical analysis conducted at the end of the dosing period on day 28, revealed no remarkable abnormalities attributable to the treatment.

10)  Organ weight data of animals sacrificed at the end of the dosing period was found to be comparable with that of respective controls.

11)  Gross pathological examination did not reveal any abnormality.

12)  Histopathological examination did not reveal any abnormality.