ABSTRACT: Objective: The current study was designed to study Acute Dermal Irritation potential of Mastilep gel (supplied by M/S Ayurvet Limited, Baddi, India) according to OECD guidelines. Materials and Methods: Mastilep gel, a new herbal ointment for topical use applied on the udder, has been developed as an alternative method for controlling mastitis in ruminants. Mastilep gel’s active ingredients including herbal extracts of Cedrus deodara, Curcuma longa, Glycyrrhiza glabra and Eucalyptus globulus are expected for their antibacterial, anti-inflammatory, analgesic, antihistaminic and immunomodulatory effects. For new substances it is the recommended stepwise testing approach for developing scientifically sound data on the corrosivity/irritation of the substance. Three female rabbits were used for the study. Each animal served as its own control. After application of Mastilep gel the degree of irritation/corrosion was read and scored. Results: No severe erythema, oedema or any skin lesion was observed after Mastilep gel application. The results revealed no irritation potential of Mastilep gel. Conclusion: MASTILEP gel is safe for usage

INTRODUCTION: Mastitis is the inflammation of mammary gland with physical, chemical and microbiological changes characterized by an increase in somatic cells in the milk and by the pathological changes in the mammary tissue 1.  Mastilep gel is a novel approach to control mastitis and applied to the teats of the affected cattle 2. As animal skin is quite sensitive for most of the chemicals thus all new formulations must be tried on skin for a specified period of time to check any irritation or erythema. Allergic, irritant contact dermatitis and phytophotodermatitis are included among the topical adverse effects of natural products 3. Hence it is very important to study dermal toxicity of Mastilep gel in vivo.

The animals for the current study were approved by IAEC (MVC/IAEC/30/2014). Healthy 12 months old 3 female New Zealand white Rabbits (body weight 2.5 kg) rabbits were used. Animals were kept under acclimatization for eight days before application. A day prior to start of the study, the rabbits were weighed. The animals were identified by appropriate identification mark. The cage was provided with a card showing the details of cage number, test formulation, animal number, sex of the animal and the study number. Housing conditions were conventional. The ambient temperature was 25oC and relative humidity of 70 %. The animals were exposed to 12 hour light/dark cycle and provided with standard diet and water ad libitum. 4

Preparation of the animals:

Approximately 24 hours before the test, fur was removed by closely clipping the dorsal area of the trunk on either side of spinal cord of the animals. Care was taken to avoid abrading the skin, and an only animal with healthy, intact skin was used. The test substance (MASTILEP) was applied in a single dose (0.5 gm) to the skin (approximately 6 cm2) of an experimental animal and covered with a gauze patch (right side of the trunk).

Untreated skin areas (left side) of the test animal serve as the control. Rabbits were exposed to the test drug for period of one hour. The degree of irritation/corrosion was read and scored (Table 1) 5 at specified intervals and was further described in order to provide a complete evaluation of the effects.

In addition to the observation of irritation, all local toxic effects, such as defatting of the skin, and any systemic adverse effects (e.g., effects on clinical signs of toxicity and body weight), were fully recorded. The skin patch of the each rabbit was closely observed and recorded twice a day. Data was recorded at interval of 24hr, 48hr and 72hr after patch removal.

Erythema: Erythema is redness of the skin or mucous membranes, caused by hyperemia of superficial capillaries 6. After 24hr redness was observed in one out of three rabbits when compared with control. After 48hrs there were no any changes observed. (Table 2)

Oedema: Edema means swelling caused by fluid in body's tissue. Though herbs are Novel Anti-inflammatory Agents 7 but for a new dermal formulation its irritation potential should be evaluated. The results revealed that there were no edematous lesions at any time of the observation (Table 3). The data obtained from the study on last day of test compound did not reveal any lesion.

Fig. 4 showed that there was redness at 24 hr time interval in one out of three rabbits when compared with control Fig.3. After 48hrs there were no any changes observed. From Fig.1 to 8 it was evident that there was no significant difference in control and test groups at different time intervals. Other skin lesions like defatting of skin, adverse skin reactions, local systemic changes etc. were not observed at any time of the observations. 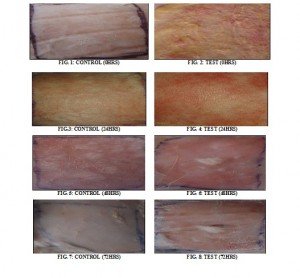 DISCUSSION: Assessing risk is a function of hazard and exposure data. For new substances introduced into the marketplace, it is the recommended stepwise testing approach for developing scientifically sound data on the corrosivity/irritation of the substance 8, 9. Some plant extract active ingredients reported to possess toxicological potential 10. In current experiment the Acute Dermal Irritation study of polyherbal gel MASTILEP in rabbits was conducted. Dermal Irritation is the production of reversible damage of the skin following the application of a test substance 11. No signs of skin corrosivity/irritation were observed on Mastilep gel application this may be because of its herbal constituents like Cedrus deodara, Curcuma longa, Eucalyptus globulus reported to posses anti inflammatory and wound healing potential 12, 13, 14.

CONCLUSION: Based on the analysis of all the available parameters studied it is concluded that MASTILEP gel was tolerated in experimental rabbits and there were no skin lesions in animals up to 72hr time interval. The overall observations indicated that MASTILEP gel did not cause any severe inflammatory changes in given skin irritation test.

ACKNOWLEDGEMENT: The authors are thankful to Ayurvet Limited, Baddi, India and Department of Pharmacology and Toxicology, Bombay Veterinary College, Parel, Mumbai for providing the required facilities, guidance and support.