Department of Pharmacology 2, Collage of Pharmacy, University of Anbar, Iraq.

ABSTRACT: This study was carried out to investigate the acute oral toxicity LD50 of an anti-neoplastic and a chemotherapeutic agent hydroxyurea in male albino mice by using up α Down method. The result revealed that LD50 of hydroxyurea was (7868.5 mg/kg. b.w). Orally after 24 h of exposure. That’s mean it is slightly toxic agent. To study the effect of lethal doses of hydroxyurea on the some of blood parameters, two survival animals were taken from this study which was received  (7000 mg/kg. b.w and 7500 mg/kg. b.w ) orally and compared with normal values of blood parameters in male albino mice. The results revealed there is an increase in Hb comparing with the normal values and the increase was dose dependent manner, while the results showed decrease of RBCs, WBCs, PCV and lymphocytes in animals received hydroxyurea comparing with the normal values and the decrease was dose dependent manner.

INTRODUCTION: Hydroxyurea (HU) is a non-alkylating anti-proliferative and antiviral agent having already been used for a diversity of neoplastic and non-neoplastic conditions. Hydroxyurea was first produced in 1869 in Germany by Dressler and Stein. It was FDA approved in 1967 and it is essential in the management of chronic myelo-proliferative disorders (MPDs), including chronic myelogenous leukemia, essential thrombocythemia, polycythemia vera and primary myelofibrosis 1. The studies showed that hydroxyurea induce fetal haemoglobin synthesis 2. The doses used in patients with sickle-cell anaemia are 25 mg/kg b.w per day in children and up to 35 mg/kg b.w per day in adults 3.

In 2016 (OSHA) 6 recorded that hydroxyurea was embryotoxic and teratogenic in rats and rabbits at doses 0.8 times and 0.3 times, respectively, also it is mutagenic  in-vitro  to bacteria, fungi, protozoa, and mammalian cells, therefore   it is aclastogenic in-vitro and in-vivo. Animal studies have revealed that hydroxyurea crosses the placenta and harmful to the conceptus is associated with embryotoxicity, malformations, growth retardation, and impaired learning ability 7.

In this study we are focused on the acute oral toxicity in mice and the histopathological and hematological effect after 24 hr of exposure to high doses.

Animals: Total number (8) male albino mice with body weight range (25-30) g and age (2-3) month. The animals were raised and bred in cages of (318x202x135mm) dimensions and left one week before beginning the study for acclimatization in the animal house of College of Veterinary Medicine/Al-Qasim green University from 22 February 2017 to 10 July 2017. Tap water and standard pellet was provided ad-libitum. Hydroxurea (Hydra®) obtained from Deva pharmaceuticals.

Acute Toxicity Study: The median lethal dose LD50of hydroxurea measured by "up-and-down" method 8. This test summarized by dosing individual animals in sequence singly doses at 24 h intervals, with the initial dose set at "the toxicologist's best estimate of the LD50". Following each death the dose was lowered; following each survival, it was increased, according to a pre specified dose progression factor.

Hematological Analysis after Acute Toxicity: Two survival animals received hydroxyurea at 7000 mg/kg. b.w and 7500 mg/kg. b.w respectively orally comparing with the normal values of blood parameters as control. The blood collected from heart puncture after general anesthesia by using (Ketamine and xylazine). By using Uto-analyzer vet we are estimate (RBC, WBC, PCV, HB and Lymphocyte). The procedure done according to manufactured instruction.

Histopathological Changes: Liver, spleen and bone marrow were obtained after 24 hrs of exposed and fixed in 10 % formaline. Decalcification of homer bone by (formic acid and sodium citrate) to obtain bone marrow.  Paraffin sections of thickness of 3 - 4 ?m were prepared and stained with hemato-xylin and eosin (H and E) for histopathological examination under light microscopy.

Acute Toxicity Study: This study revealed that the LD50 of hydroxyurea according to 8. The acute toxicity symptoms which were observed after dosing the animals include, grooming, piloerection, anorexia. Muscular tremor, convulsion and after three hours coma and death (the severity of symptoms was positively proportional to the dose).

The previous signs that appear when exposed mice to high doses of hydroxurea may be due to the mechanism of action of hydroxurea which included produced of ROS 9. Furthermore the high volume of chemotherapeutic agent in stomach may be attributed to show these signs.

TABLE 1: THE TOXIC SYMPTOMS AND MORTALITY OUTCOME THAT DEVELOPED ACCORDING TO DIFFERENT DOSES OF HYDRXUREA IN MALE ALBINO MICE ACCORDING TO UP AND DOWN METHOD 8

TABLE 2: ESTIMATE THE ORALLY LD50 OF HYDROXUREA IN MALE ALBINO MICE BY USING UP AND DOWN METHOD 8

So we are confirm with Bristol-Myers 10 which were recorded that large doses of hydroxurea may be produce drowsiness Neurological disturbances, headache, dizziness, disorientation, hallucinations and convulsions.

The Food and Drug Administration 7 recorded that hydroxyurea LD50 in mice was 7330 mg/kg. b.w orally for 24 hrs while in rats at 5,780 mg/kg was lethal following a single dose. The toxicities observed in this study can be explained in most cases by the published mechanisms of action of it. Hydroxyurea is rapidly metabolized to a carbo-moylnitroso intermediate and then to nitroxide compounds (including nitric oxide) that are responsible for physiologic and toxic effects 9. These nitroxides act as free radicals, interfering with electron transfer, facilitating formation of reactive oxygen species inducing oxidative stress, interacting with nucleic acids and proteins to impair cellular functions, and altering cell signaling 9.

TABLE 3: SHOW THE EFFECT OF HIGH DOSES OF HYDROXYUREA ON BLOOD PARAMETERS AFTER 24HR OF ORAL ADMINISTRATION AND COMPARING WITH NORMAL VALUES 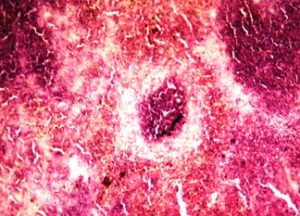 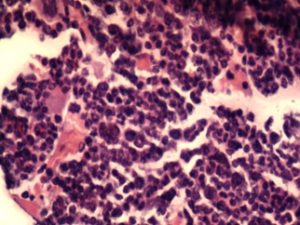 FIG. 2: SHOWING BONE MARROW OF MICE RECEIVED 7500 mg/kg. b.w OF HYDROXUREA BEFORE 24 h. There is proliferation of polymorphous nucleic cells and amyloid accumulation in bone marrow and necrosis in some of these polymorphous cells mainly neutrophils with mild hemorrhage in bone marrow. 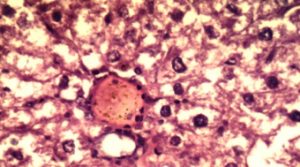 FIG. 3: SHOWING THE LIVER OF MICE RECEIVED 7500 mg/kg. b.w OF HYDROXUREA BEFORE 24 h. There is sever vacuolation and swelling of hepatocytes with presence vacuoles in there cytoplasm (hydropic degeneration) and congestion of central vein with infiltration of inflammatory cells.

Furthermore hydroxyurea is still the only FDA approved drug for hemoglobin induction in sickle cell disease 13. From the previous information it is clear to us that hydroxurea effected mainly on RBCs and WBCs. Many researchers strongly suggested that the serious toxicity of hydroxyurea is not due to its ability to inhibit DNA synthesis, but also its ability to produce ROS leading to oxidative stress and cell death 4. Therefore that’s may be due to the cause of decreases in (RBCs, WBCs, PCV and Lymphocytes) in present study. While the increase in Hb level may be due to ability of hydroxurea to acceleration of erythropoiesis and that enhances the chance of produce immature RBC (hydroxurea cytotoxicity). And that’s lead to increase of Hb. The histopathological slide of liver of mice received 7500 mg/kg. b.w as single lethal dose  showed there is sever vacuolation and swelling of hepatocytes with presence of vacuoles in there cytoplasm (hydropic degeneration), congestion of central vein with mild infiltration of inflammatory cells (Fig. 3).

Therefore the bone marrow slide showed there is proliferation of polymorphous nucleic cells and amyloid accumulation in bone marrow and necrosis in some of these polymorphous cells mainly neutrophils with mild hemorrhage in bone marrow (Fig. 2). While the spleen lesion was sever vacuolation and swelling of hepatocytes with presence vacuoles in there cytoplasm (hydropic degeneration) and congestion of central vein with infiltration of inflammatory cells. (Fig. 1). These lesions may be due to the rapid production of (ROS) it is started after 2 hours of hydroxurea exposure and cell death 4. By reaction of hydroxylamine moiety with O2 moiety to produce H2O2 and hydroxyl radical (OH-) these radicals pass to tissues by passive diffusion and caused the previous lesions in bone marrow and spleen by the other hand the lesions that’s arising in liver tissue may be due to converted of hydroxurea to urea in liver (the main site of hydroxurea metabolism) of mice as a direct reduction catalyzed by enzymes present in most subcellular fractions of liver homogenates 14.

We are in agreement with 15 who recorded that Hydroxyurea increases the serum level of total Hb, HbF, MCH and MCV. Furthermore, it increases transfusion intervals and significantly improves clinical abnormalities. Other researchers Rassnick et al., 2010 16 founded that hydroxyurea cause decreased in granulocytes, erythrocytes and platelets reported in humans and cainine. Also we are corresponding with Gift D, et al., 2015 who recorded that hydroxyurea increased HbF level in anemic primates.

CONCLUSION: The acute oral administration of hydroxyurea in male albino mice caused slightly toxic effects, It was also noted the presence of effects on some blood components (RBCs, WBCs, PCV, Hb and lymphocytes).

ACKNOWLEDGEMENT: The authors are thankful to Dr. Zahraa M Ayad and Dr. Ameer Redha Derwall, for there their motivational support and guidance.

CONFLICT OF INTERESTS: Declared None.