INTRODUCTION: Medicinal plants have occupied a vital place in the sociocultural, development of rural people of India 1. Solanum lycopersicum is a plant in the family Solanaceae known as in India “Tamator” grown in China, India, United States, Turkey, Egypt, Iran, Italy, Brazil, Spain and Uzbekistan. Tomato (Solanum lycopersicum) is the second most produced and consumed vegetable in the world. It has been indicated in the prevention and treatment of cancer, asthma and atherosclerosis. Blood constituents labeled with radionuclides have been used in procedures in nuclear medicine. According to its functions, the fruit of Solanum lycopersicum has been extensively used in traditional medicine to cure human diseases including cancer diseases such as lung, prostate, stomach, cervical, breast, oral,

Toxicity is the fundamental science of poison. The organisation for Economic and development (OECD) mentioned acute toxicity as the advance effect occuring within a short time of oral administration of a single dose of a substance or a multiple dose given within 24 hrs. Phytochemical interactions of poison lead to injury or death of living tissues. Toxicology is like science and an art like medicine. It includes observational data gathering and data utilization to predict outcome of exposure in human and animals. The ancient humans categorised some plants as harmful and some as safe 8.

Fresh leaves of Solanum lycopersicum Linn. were collected from the surrounding of Lucknow, Uttar pradesh, India, in the month of November 2012, and authenticated by Dr. Tariq Hussain, Senior principal scientist of plant divercity, systematics and herbarium division NBRI, Lucknow and U.P, India.

A voucher specimen has been deposited in the Department of Botany NBRI, Lucknow. The leaves were shade dried at room temperature (250C) for 10 days, and finely grounded into powdered form with the help of an electric grinder and stored. The powdered material was extracted in ethanol via maceration process for approximately 7 days. The solvent was removed by distillation under reduced pressor.

The residue was shade dried until further use. The yield of prepared extract was 87.77%. Primary phytochemical investigation was conducted by the methods of Kokate.

Adult female Swiss albino mice were used for acute toxicity,weighing 25- 30gm (age 4-6 weeks) were housed in stainless-steel wire cages in a well-ventilated room at temperature 220 C (± 3°C), humidity 56 ± 5% and under 12-h light/dark cycle. Each cage contained 5 to 6 mice of the same sex with a bedding of husk. Food and tap water were given ad libitum. All animal experiments were carried out as per CPCSEA guidelines (Approval No. -1397/ac/10CPCSEA).

Acute oral toxicity test was performed as per 9 guidelines. The overnight fasted mice were randomly distributed into one control group and treated groups, containing three animals per group. The control group received vehicle alone. Treated groups were orally administered 2000 mg/kg body weight ethanolic extract following the method of 10. After administration of the extract, the animals were observed continuously for the first 2 hours and 24 hrs to detect changes and 14 days for any signs of behavioral changes, salivation, diarrhoea, lethargy, sleep, toxicity, mortality and body weight.

The result were express as Mean ± SEM. Statistical analysis was carried out using student-t test. P<0.05, P<0.01 and P<0.001 were considered statistically significant.

In the acute toxicity study we observed that group treated who were administered ethanolic leaf extract of Solanum lycopersicum up to 2000 mg/kg body weight showed a highly significant increase (P<0.05) in body weight when compared to control group as shown in Fig. 1.

Female mice fed with the extract at a dose of 2,000

entire period of 14 days of observation. In histopathology no abnormalities were detected in pathological examinations during microscopic examination of internal organs as comparaed to control and test animals. Six organs of all animal (brain, lungs, heart, kidney, spleen, and liver (Fig. 3) were examined 13. All vital organs were in normal level. 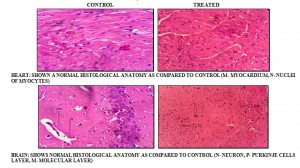 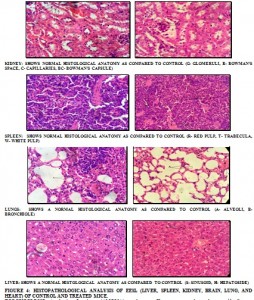 DISCUSSIONS: Analysis of variance (ANOVA) revealed significant differences in the acute toxicity study of tomatoes. There is growing concern about the toxicity of herbal remedies as they contain substantial amounts of pharmaceutically active ingredients whose mechanisms of actions and adverse effects are mostly unknown 14. Severe injury, including acute and chronic abnormalities have been described after the ingestion of a wide range of herbal products such as mushrooms, germander (Teucrium chamaedrys), chaparral (Larrea tridentate) etc 15. Hence, investigations on haematological and histopathological alterations associated with acute oral toxicity of ethanolic extract of Solanum lycopersicum leafwere conducted. In acute toxicity study, there was no mortality up to a maximum dose of 2000 mg/kg body weight of EESL after per oral administration.

The changes in body weight have been used as an indicator of fat accumulation in the body 16. Since no changes were observed in animal behavior, body weight and organ weight at all dose levels in treated mice as compared to control group, so it can be say that EESL is nontoxic at the doses administered.

Acute toxicity study also showed no significant changes in haematological parameter. There is trancient increase in MCH (mean cell volume), MCHC (mean corpuscular haemoglobin concentration), and reduction in red blood cells (RBC) showed anaemic condition due to iron deficiency or may be Vitamin deficiency 18 or may be suppression of circulating hormones 19.

However an increase in the parameter granulocytes due to some allergic reaction or infection 20. The EESL did not show any toxic effect on the internal organs of the mice in histopathology. All vital organs (brain, liver, lungs, spleen, heart, and kidney) were in their normal sizes. Lungs showed thickening of wall due to weight gain of treated mice during 14 days of period of toxicity study as compared to control mice. These results indicate no toxicity effect of the substance due to no changes in such parameters, which are often the first signs of toxicity 21.

CONCLUSIONS: Based on these result, no toxic effect was observed up to 2000 mg/kg of EESL treated via oral route over a period of 14 days. The results of present study have shown that acute administration of ethanolic extract of Solanum lycopersicum leafmay be safe as the LD50 could not be determined at the doses given. This study is not a complete toxicity study. It emphasizes the call for carrying out toxicity studies even in natural plant products.

ACKNOWLEDGEMENTS: Authors are grateful to Rameshwaram Institute of Technology and Management, Lucknow for providing necessary facilities to carry out this work. This study was also supported by Dr. Kanchan Mani, MBBS, MD (Pathology), K.G.M.U., Lucknow to determine toxicological examination.