INTRODUCTION: The invention of useful antiviral agents has been expedited with the aid of advances within the area of molecular biology and virology.

Developing knowledge of host cell virus relations and viral replication has led to the development of secure and powerful antivirals. Those dealers act by impeding access of viruses into host cells; interfering with the viral meeting, launch, or de-aggregation, forbidding transcription or replication of the viral genome; or averting viral protein synthesis 1. Antiviral drugs can be passed down to deal with an ailment as a therapeutic approach, save from contamination as a prophylactic strategy, or save from disorder as a preemptive approach. The oral bioavailability of acyclovir is terrible, with only 15%–30% of the oral formulations being absorbed 2, 3.

Nanoparticles have currently emerged as of extra specialty within the biomedical industry because of their sizable wonderful residences. Essentially, they have a substantial surface-area-to-volume ratio, which is extremely useful in a drug shipping context because it means that the drug is more likely to interact with the target region and achieve its desired effect 4.

Gelatin is a natural biopolymer with a huge array of biomedical applications in diverse industries and drug transport and gene therapy. It's far derived from collagen through a hydrolysis response, which is normally sourced from animals 5. A critical benefit of making use of gelatin NPs is the reality that they are substantially biocompatible. This is critical for biomaterials because it approaches that they may elicit minimal immune reaction from the body; accordingly, there's a lower threat of rejection. In addition to this, gelatin is biodegradable, possesses proper adhesive abilities, is effortlessly and effectively to be had in abundance, and is particularly cheap 6.

Moreover, the surface of gelatin NPs can be functionalized, which enables the promotion of drug transport profiles to precise sites within the body and with modifiable launch charges. Gelatin is also widely regarded as secure to be used for medical packages. Because of being denatured, it has very low antigenicity. They may be derived from collagen and hence do not produce any harmful by-products after they degrade 7, 8. The general technique for fabricating the small length (<100nm) of gelatin NPs involved dissolving and rapidly decreasing the temperature of a gelatin method to compress the gelatin molecules (and subsequently reduce their size), accompanied by cross-linking. Moreover, the drug release profile can be efficaciously altered by enhancing the concentration of the drug. The fabricated <100nm gelatin NPs have splendid potential in drug shipping and possess the benefits of any gelatin-based scientific device while overcoming the weaknesses of standard gelatin NPs 9.

Materials: Acyclovir was obtained as gift samples from Micro Labs Ltd.; Gelatin (Type A) was obtained from Sigma-Aldrich Chemicals Private Limited, Bangalore; Glutaraldehyde was obtained from Molychem, Mumbai. All other materials used were of analytical grade. Pharmacokinetics studies were carried out in Natreon Inc, Kolkata.

Formulation of Acyclovir Loaded Biodegradable Gelatin Nanoparticles: A double-step desolvation approach was used to form gelatin nanoparticles, hitherto described by Coester et al. in 2000 10. Different formulations (F1 to F13) were prepared, and calculated amounts of gelatin (Type A) (0.5 to 1.1% w/v) was dissolved in 25 ml distilled water in steady heating at 37°C. After the solution was clear, the 25 ml of the desolvating agent was combined to precipitate the gelatin. The supernatant was thrown away, and the gelatin was again mixed with 25 ml distilled water containing acyclovir  (1%) and the pH of the solution was corrected to values 2.5 by using 2M HCL. The solution was heated to 37°C and swirled at 600 rpm using a magnetic stirrer. During a second desolvation phase, drop-wise inclusion of around 75 ml of acetone with constant stirring turned out gelatin nanoparticles with a narrow size range. Later 10 minutes, variable amounts of 25% v/v aqueous glutaraldehyde solution (100 to 400 μl) were mixed with cross-linking the nanoparticles, and after half an hour the cross-linking process was interrupted by the addition of 5 ml of 12% w/v aqueous sodium meta-bisulfite solution. The gelatin nanoparticles dispersion was then mixed at 10,000 g for 30 minutes before being rinsed three times through water to discard adherent-free drug from the nanoparticles' outer surface. The lyophilized powder was then kept at room temperature in impenetrable glass containers until required.

TABLE 1: INDEPENDENT VARIABLES AND THEIR LEVELS

Drug Encapsulation Efficiency: The capacity of manufacturing technique and components to incorporate or accomplice the drug correctly in nanoparticles is represented as drug entrapment performance (EE), which may be quite simply decided by reading the loose drug entrapped drug or overall drug 11.

The supernatant solution becomes separated. The nanoparticles were then suspended in PBS at pH 7.4 and centrifuged yet again. The cleansing method was repeated twice to ensure no free drug remained in the empty area between the nanoparticles. Every time the supernatant becomes separated and drug content is evaluated, the usage of cm -1 quartz cells and UV–visible spectrophotometry (Shimadzu 1700) at 252 nm as opposed to phosphate buffer (pH 7.4) as a clean.

Via subtracting the quantity of loose drug from the entire drug incorporated, the load of entrapped drug turned into anticipated. The experiments had been duplicated three times in general. The usage of the components under the drug entrapment efficiency (percentage) was computed 12. (Eq.1)

Determination of Zeta Potential: Nanoparticles with a more zeta potential (positive or negative) are electrically stable, while those with a low zeta potential coagulate or flocculate.

A zetasizer was used to evaluate the zeta potential of the acyclovir-loaded gelatin nanoparticles (Malvern units, zeta analyzer). Setting diluted samples (with ultra-purified water) within the capillary dimension cell and editing the mobile position, the measurements have been carried out in an automated mode using an aqueous dip cellular 13.

The assembly was placed in the SEM chamber, which was managed in a low vacuum mode and put up at a steady pressure of 80 Pa. To establish the surface view and form of the samples, photographs were taken 14.

The drug release media were absolutely replaced at predetermined time intervals to the keep sink conditions.

Cumulative release of acyclovir in sample solution was investigated by UV spectrophotometer at 252 nm 15, 16.

Drug Release Kinetics: To know the order of kinetics, the collected drug release data from the optimized formulation (F9) was disposed to zero-order and first-order kinetic design, as well as Higuchi's and Korsmeyer-Peppas plots to identify the mechanism of drug release from the gelatin nanoparticles containing acyclovir 17, 18, 19.

The outcome of particle size, zeta-potential, and entrapment efficiency were enforced on ANOVA modules to learn whether the selected variables had significant control or not. The ANOVA function was exercised by Design-Expert software version: 13.0.8.0 20.

Pharmacokinetic Study: The rabbits used were nine albino adult male rabbits weighing 1.4–2.0 kg. The rabbits were housed in individual cages and given a diet and water ad libitum.

An oral pharmacokinetic study was conducted with three separate treatment groups, each of which included four animals. 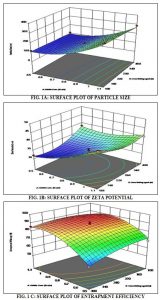 Effects on Particle Size (Y1): As demonstrated in Table 2 and Fig. 1 (a), particle sizes of different formulations were found between 104.23nm (run1) and 370.83 nm (run 7); this chosen sensitivity of critical variables selected for the study. Experiments conceded out at the center points (runs 1, 4, 5, 9, and 13; n = 5) of the design show reproducibility of the experiment as the coefficient of variation (CV) is a lesser amount of than 8%. Independent factors influencing particle size can be explained by the following quadratic equation 2.

A regression coefficient (r2) of 0.9871 for the equation designated a higher correlation among experimental responses and chosen significant variables.

Effects on Zeta Potential (Y2): As revealed in Table 2 and Fig. 1B, the Zeta potential of formulations ranged between -31.39 mv (run 11) and -45.13mv (run 7); this chosen sensitivity of critical variables selected for the study. Experiments conceded out at the center points (runs 1, 4, 5, 9, and 13; n = 5) of the design show reproducibility of the experiment as the coefficient of variation (CV) is a lesser amount of than 3%. Independent factors influencing Zeta potential can be explained by the following quadratic equation 3.

A regression coefficient (r2) of 0.9732 for the equation designated a higher correlation between experimental responses and chosen significant variables.

Effects on Entrapment Efficiency (EE, Y3): As exhibited in Table 2 and Fig. 1C, EE varied between 57.59 %( run 11) to 91.23% (run 9), which displays that the response was inclined towards chosen factors. Experiments completed at the center points of the design (runs 1, 4, 5, 9, and 13; n = 5) set that the experimental method was highly reproducible (CV < 3%). From the data conferred in Table 1, it is obvious that independent factors affecting EE were; the concentration of gelatin (X1) and the amount of cross-linking agent (X2).

A regression coefficient (r2) of 0.9745 designated a higher correlation among experimental responses and chosen significant variables.

Drug Encapsulation Efficiency: It was observed that the entrapment efficacy of acyclovir-loaded GNPs formulations was found between 57-91 %. Table 2 Electrostatic attraction, Physical entrapments, and chemical bonding were the approaches used to load drugs into GNPs 24.

The F9 formulation revealed superior entrapment efficacy (91 %) than other formulations (p<0.05) due to their lesser size, which has superior surface area for consistent absorption and ionic relations between the drug and matrices of gelatin nanoparticles to increase the drug loading 22.

Particle Size: Crosslinking of gelatin nanoparticles is vital to offer stability, spherical shape, and enhanced in-vivo circulation of nanoparticles within the anatomy 23.

Glutaraldehyde is a crosslinker that cross-link by free amine groups of lysine or hydroxyl lysine residues of gelatin molecules. A smaller amount of glutaraldehyde is not adequate to cross-link the gelatin nanoparticles as rapid particle size increases due to swelling of gelatin in aqua media after the organic solvent is dissipated.

Morphological Examination of Acyclovir Loaded Gelatin Nanoparticles: The surface morphology of optimized drug-loaded gelatin nanoparticles (F9) (shown in Fig. 2) was smooth, and uniform because of the texture of the gelatin employed.

In-vitro Drug Release Study: From the in-vitro release profile Fig. 3(a), it was found that optimized formulation (F9) depicted significantly higher dissolution than a pure drug in the dissolution media (pH 7.4) due to gelatin nanoparticles cross-linked by glutaraldehyde resulted in a biodegradable carrier, in which the key part of acyclovir was controlled to the protein matrix via glutaraldehyde, composing a drug-conjugate to enhance the in vitro release activity 24. Therefore prepared gelatin nanoparticles formulations exhibited significantly higher dissolution efficiency than pure acyclovir in dissolution media. 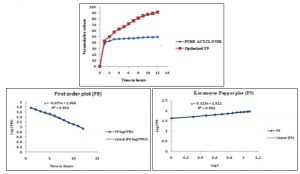 ANOVA Studies: The ANOVA studies (shown in Table 3) indicated that the whole experiment involved two independent variables that were significant with respective to their control against particle size, zeta potential, and entrapment efficiency. As shown in Table 4, The Model F-value of 107.37, 50.76, and 53.52 mention the model is considerable. There was only a 0.01% probability that an F-value this large could occur considering noise. Model terms with P-values less than 0.0500 are considerable. A, B, A², and B² were important model terms in that scenario. As shown in Table 4, The Lack of Fit F-value of 3.36, 1.72, and 2.38 mention that the Lack of Fit is not considerable compared to the pure error. There was a 21.04%, 29.95%, and 21.08% probability that a Lack of Fit F-value this outsized could occur considering noise. Non-significant lack of fit was superior for the model to be robust. 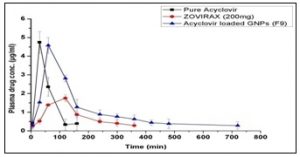 ACKNOWLEDGEMENTS: I kindly acknowledge Micro Labs Ltd, Baddi, Himachal Pradesh, India, for arranging for me a sample of a gift of acyclovir. I warmly thank Natreon Inc, Kolkata, for allowing me to use their resources for in-vitro and pharmacokinetics studies. Last but not least, I am grateful to all of my friends and seniors who have provided me with round-the-clock support for anything I have needed to keep me on the road of research.