ADDING NIACIN WITH ATORVASTATIN IN PATIENTS WITH RENAL ISCHEMIA: A COMPARATIVE STUDY

ADDING NIACIN WITH ATORVASTATIN IN PATIENTS WITH RENAL ISCHEMIA: A COMPARATIVE STUDY

ABSTRACT: The study was aimed to compare the effect of lipid lowering only through Atorvastatin and lipid lowering combined with HDL-C raise by adding Niacin on the lipid profile and renal outcomes in renovascular disease. It was prospective, analytical hospital based study. In diagnosed patients Atorvastatin (20mg) and/or in combination with Niacin Extended Release 500mg/day was prescribed randomly distributed in two groups of equal size (n=60) for four months. 50 healthy individuals were also added to get local reference values. Pre and post treatment lipid profile and Apo A-1 were measured and analyzed using t-test at alpha 0.05. There was no difference in the baseline values. Atorvastatin induced a significant reduction in total cholesterol (p<0.05) and LDL (p<0.05), while decrease in TG and vLDL levels remained insignificant. It also causes an increase in HDL (p<0.05) and Apo A1 that was non-significant. Atorvastatin combined with NER reduced cholesterol (p<0.05), TG (p<0.05), LDL (p<0.05) enhanced HDL (p<0.0001) and Apo A1 (p<0.01). The inter-group comparison of both treatments demonstrated relatively better outcomes following Atorvastatin NER combination in terms of good cholesterol (p<0.01) for HDL and (p<0.01) for Apo A1, while in term of lipid lowering potentials, we found no difference. Addition of NER to statin has beneficial effect on lipid profile even at a comparatively low dose of 500mg and well tolerated in renovascular disease patient. This combination may be used to prevent further systemic complications in this group of patients.

INTRODUCTION: Renal ischemia is a condition of kidney hypo-perfusion beyond the level of kidney auto-regulation that brings significant decrease in glomerular filtration rate (GFR) by affecting the whole functional parenchyma and is mainly result of renal vessel occlusion 1.

It is a relatively new clinical condition that has been widely discussed and referred in literature as ischemic renal disease (IRD), chronic renal ischemic disease (cRID), azotemic renovascular disease or renal insufficiency of renovascular hypertension 2.

The clinical presentation includes bland urinary sediments, mild to moderate proteinuria, gradually reducing GFR that may lead to end-stage renal disease (ESRD). The progressively damaging abnormality is likely to develop in older patients (particularly over 50 years), in patients with difficult to cure hypertension usually non-responsive to Angiotensin-converting enzyme (ACE), diabetes mellitus, female sex, renal artery or abdominal bruit, chronic/heavy smokers, increase cholesterol level and in patients with clinically manifested atherosclerosis 1, 3. Among these, the most prevailed etiological findings are hypertension (97%), hypercholesterolemia (63%) and smoking (70%) as reported in multicentre GEDENI study 4. It is potentially reversible disorder and the loss can be either prevented or slower down by treating the underlying etiological factor.

In ischemic nephropathy where elevated cholesterol is one of the principal causes, the basic disease genesis mechanism is comprised of plaque formation in the renal artery producing an obstruction in the blood flow exposing the renal tissue to ischemia. The damage to functional parenchyma that impairs the kidney physiology includes atrophied tubules, collapsed glomeruli and interstitial fibrosis 5. The interventional approach mainly addresses to relief the renal derangements and is symptom based initially, once dyslipidemia is identified normally extended to lower the increase concentrations of cholesterol and low density lipoproteins (LDL).

Sufficient data has now been published that endorse a reduction in high density lipoprotein (HDL) is equally important contributor in the development of sclerosis artery disease, even can be sole causing factor at any level of cholesterol 6, 7. This is the reason current therapeutic regime is being transformed to not only aim at lowering LDL but also to enhance the levels of HDL. Statins are commonly used drugs that show a dose-dependent reduction in LDL and possess over all lipid profile beneficial effects. They also have known to bring a few percent rises in HDL level 8, 9.

However, their primary objective is not to increase HDL so they cannot be first choice if drug administration is to improve HDL levels. To date no approved direct HDL is commonly available to be administered in human subjects as therapy but different HDL raising agents are known and in practice like fibrates and niacin and in trial phase the cholesterol ester transfer protein (CEPT) inhibitor.

Niacin would be choice HDL elevator because of severe contraindications produced by fibrates in compromised renal function used along with statins and secondly niacin provides comparatively higher percent increase in HDL level 10.

The present study was designed to assess the comparative effect of two approaches on lipid profile. First in case where only LDL is aimed to lower down through Atorvastatin and second when HDL is targeted to increase using NER along with a reduction in LDL in patients with renovascular disease.

METHODOLOGY: It was a hospital based prospective, randomized, analytical research plan that was executed in collaboration with Nephrology Unit, JPMC, Karachi, Pakistan during 2007-2012. Ischemic renal changes were suspected in paints with at least 5-year diabetes mellitus and/or 10-year hypertension.  Diagnosis was confirmed through renal artery Doppler scan performed by skilled technician. Existence or absence of ischemic tissue damage was sole decision of nephrology consultant.

On the basis of clinical picture and Doppler scan report, finally 135 patients were recognized as potential experimental units and were requested for consent to participate in a follow up study after explaining the purpose and answering their queries.

Information regarding personal and family medical history, demographics, current medication, and other required items were taken on a structured questionnaire at day first.

Creatine phosphokinase and liver transaminases were measured at every 30 day period while the overall patients’ status concerning with dose, drug tolerance, undesired side systemic effects were also monitored. To attain the local reference values of all tested parameters, blood samples were also collected from 50 characteristic matched healthy volunteers once. The principles sketched out in the declaration of Helsinki were carefully followed throughout and the plan was approved by institutional BASR.

Collected data was tabulated and reported as Mean ± S.D. t-Test was used to compare mean values through statistical software SPSS 17 at chosen p-value 0.05.

RESULTS: Initially 120 patients were enrolled in the follow up study. All partakers were randomly categorized in two groups of equal size (n = 60). 04 patients dropped out from the first group who failed to take medicine as prescribed or did not report back for follow up.

While 05 patients left from second group with same reasons and 04 patients discontinued combination therapy because of poor tolerance and indigestion problems, 54 patients taking statin while 51 with statin NER combination completed the protocol successfully for four months and assessed for final changes.

There was no difference in the baseline values of studied patient population at the start of plan. All lipid variables, Apo A-1, renal function analyzers and blood glucose levels were found non-significant in inter-group comparison (Table 1).

Values are shown as ‘Mean ± S.D.’ No significant difference was found in Statin vs. Niacin + Statin group comparison.

In comparison with the disease control group comprised of patients’ baseline values, Atorvastatin induced a significant reduction in total cholesterol (p<0.05) and LDL (p<0.05), while decrease in TG and vLDL levels remained insignificant. It also causes an increase in HDL (p<0.05) and Apo A1 that was non-significant. On the other side, Atorvastatin combined with NER also showed beneficial effects on lipid not only by reducing cholesterol (p<0.05), TG (p<0.05), LDL (p<0.05) but also by enhancing HDL (p<0.0001) and Apo A1 (p<0.01). The inter-group comparison of both treatments demonstrated relatively better outcomes following Atorvastatin NER combination in terms of good cholesterol (p<0.01) for HDL and (p<0.01) for Apo A1, while in term of lipid lowering potentials, we found no difference (Table 2).

Though the inter group comparison of overall lipid lowering protection induced by both treatments did not touch the level of significance in a statistical evaluation, still Atorvastatin NER combination provided superior useful mean percent change for almost all lipid parameters (Figure 1). 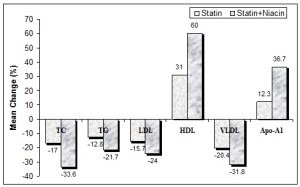 1: As compared with healthy control

2: As compared with Disease control

3: As compared with Statin Alone

DISCUSSION: Our data showed that its not only an increase in LDL but significantly low levels of HDL is also a common finding in renovascular disease, a disease shares general atherosclerotic mechanism as in any other tissue like heart. Low HDL-cholesterol’ or ‘hypoalpha’ syndrome is the most frequent lipoprotein abnormality in coronary patients, and found a consistent observation in most of vascular disorders 11 that has not received as much attention as the hyper LDL-cholesterolaemia. Raised HDL levels through NER also showed comparatively better effect on renal function with a significant decrease in creatinine level (Table 3) while this was not observed in case of statin alone.

Chiesa et al 12 demonstrated that an acute rise in HDL level is significant in the regression of atheromoa in experimental model while the same was also reported by Nissen et al 13 in the patients of coronary artery disease; both findings are in agreement with that of we observed. In contrast, a drastic reduction in LDL levels through statins did not result in significant atheroma reduction 14.

The exact mechanism through which statins increase HDL and ApoA-1 concentration is not yet well understood, though it seems unrelated to their lipid lowering mechanism. A possible explanation may be their up regulatory effect of hepatic ABC transporter A1 gene expression 15 or in part their potential to reduce hepatic lipase activity 16.

The lipid lowering properties of nicotinic acid have been known for 50 years. It causes significant reduction in TG levels and a remarkable increase in HDL mainly through its antilipolytic activity 17, recently its interaction with a G/protein-coupled receptor present in adipocyte has been reported 18-20. Briefly, niacin affects the hepatic holoparticle endocytosis, reduces the hepatic removal of HDL, down regulates chain adenosine triphosphate synthase cell surface expression leading to raised plasma HDL.

The study limitations are limited sample size and short time of follow up that was insufficient to assess any systemic effect associated with long term use in reno-compromised patients.

CONCLUSION: Addition of NER to statin has significant lipid lowering effect along with HDL increase even at a comparatively low dose of 500mg and well tolerated in renovascular disease patient. This combination may be used to prevent further systemic complications in this group of patients.