Adrenal myelolipomas are rare benign endocrinologically inactive tumor composed of mature adipose tissue and hematopoietic cells in varying proportions. Most lesions are small, unilateral and asymptomatic, discovered incidentally at autopsy or on imaging studies performed for other reasons. Its characteristic appearance on sonography and computed tomography enables preoperative diagnosis with a high degree of safety and accuracy. The association of adrenal myelolipoma with cholelithiasis is not well documented in the literature. It could be an incidental association or there may be a common underlying pathologic basis. Here we report a rare case of adrenal myelolipoma in a 30-year old woman. Our case was unusual because of large size, symptomatic presentation and associated gall stones.

Case History: A 30-year old woman presented with the complaint of intermittent dull aching pain in the left upper quadrant of abdomen for seven months. There was no history of fever, vomiting or gastrointestinal bleeding. There was no significant past medical or family history. Physical examination was unremarkable. Her complete blood counts, liver function tests and chest X-ray were normal. USG revealed a hyperehoic lesion (4.5x3 cm) in the left suprarenal region along with multiple gall stones.

CT scan showed a well defined hypodense lesion (4.13 x 2.63 cm) superolateral to left kidney. A diagnosis of adrenal lipoma was considered. Serum catecholamines, cortisol and urinary VMA were within normal limits. The patient underwent an open left adrenalectomy. Cholecystectomy was not done as it would have required another abdominal incision and was postponed for a later date. Macroscopic examination of the specimen revealed a well circumscribed and encapsulated mass measuring 5 x 4 x 3 cm.

Cut section was yellow to grey brown (Fig. 1). Microscopic examination revealed predominantly mature adipose tissue interspersed with hematopoietic cells of erythroid, myeloid and megakaryocytic series with peripheral compressed adrenal cortical tissue (Fig. 2). A diagnosis of adrenal myelolipoma was made. The patient had an uneventful postoperative course and was discharged on fourth postoperative day. 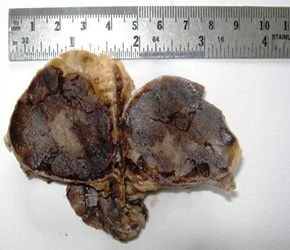 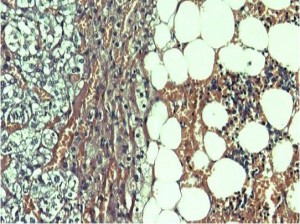 DISCUSSION: Myelolipomas are well- circumscribed lesions that contain mature adipose tissue intermixed with hematopoietic tissue. The adrenal gland is the most common site but myelolipomas also occur rarely in extraadrenal locations such as presacral soft tissues, retroperitoneum, thorax and pelvis 3. The exact aetiopathogenesis of these tumors is still obscure. Various hypotheses proposed are bone marrow embolism, extramedullary hematopoiesis, and bone marrow metaplasia. The most plausible explanation may be that undifferentiated mesenchymal stem cells within the adrenal cortex are stimulated to differentiate into myeloid and lipoid lines by some stress in the form of chronic illness, necrosis or neoplasia 4.

The reported incidence of adrenal myelolipoma varies from 0.08% to 0.2% in autopsy series 5. The male to female ratio is 1:1, and are commonly found in the fifth to seventh decade. Tumor size has been reported in literature from a few millimetres to more than 30 cm, but rarely exceeds 5 cm. They are mostly unilateral, bilateral tumors occur in about 10% of cases [6].

Typically, most adrenal myelolipomas are asymptomatic and are usually detected incidentally at autopsy or during life when the patient undergoes investigations for other reasons. Occasional patient presents with abdominal pain secondary to haemorrhage, tumor necrosis, or mechanical compression from tumour bulk 6. Although they are not hormonally active, there is very rarely an association with functional adrenal disorders such as Cushing syndrome, Conn syndrome and congenital adrenal hyperplasia 3. Malignant degeneration of adrenal myelolipoma has not been reported so far.

The development of improved imaging techniques has increased their diagnosis in routine clinical practice. It has specific sonographic and computed tomographic findings and sometimes a diagnosis of renal angiomyolipoma, retroperitoneal lipoma, liposarcoma of the adrenal gland are considered in the differential diagnosis 7.

The management of adrenal myelolipoma should be individualized. The asymptomatic small lesions of less than 4 cm should be followed with CT scan or MRI. Surgery is indicated in patients who are symptomatic, or lesion of more than 4 cm in size due to rare chances of rupture, or if malignancy is suspected 6.

Our patient was a young female of 30 years who presented with left sided abdominal pain. USG revealed an adrenal mass along with multiple stones in the gall bladder. The pain was related to adrenal myelolipoma, necessitating surgical resection of the tumor. Adrenal myelolipoma has rarely been described in association with cholelithiasis 1, 2. The co-occurrence of these two pathologies may be an incidental finding or there may be an underlying pathologic basis which is not yet known.