ADSORPTION OF CIPROFLOXACIN FROM AQUEOUS SOLUTION ONTO FE3O4/GRAPHENE OXIDE NANOCOMPOSITE

INTRODUCTION: Contamination of surface and even groundwater is becoming an increasingly serious problem worldwide because of the growing population and widespread use of chemicals, including pharmaceuticals 1-3. The pharmaceuticals constitute an important and rapidly emerging class of pollutants worldwide 4, 5.

Pharmaceutical compounds have been recognized as a hazardous class of organic pollutants due to their extensive use and long term eﬀects towards aquatic environment 6, 7. Antibiotics constitute a group of pharmaceuticals that are widely used to treat several infectious diseases in both human and animals 8. About 30-90% of the given antibiotic dose can remain undegradable in the human or animal body and is largely excreted as an active compound 9, 10.

Most antibiotics are incompletely metabolized; thus, their residues and degradation products are excreted and can enter water environments in various ways 11, 12. Exposure to the residues and metabolites of antibiotics may cause a variety of adverse effects in the environment, such as antibiotics resistance of microorganisms and chronic and acute toxicity for organisms 13, 14. Among the antibiotics used, Ciproﬂoxacin (CIP) antibiotics are belonging to the Fluoroquinolones (FQs) family, are hydrolytically stable, difficult to degrade in water and widely detected in wastewater, soil and sediments 15, 16. Environmental risks associated with SIP including antibiotic resistance of bacteria have been reported 17. Pharmaceuticals are emerging contaminants and their effective removal from water resources is very important 18.  The efficiency of antibiotics removal from water in a traditional system is low because of their low biodegradability, high solubility in water, and complex molecular structures 19, 20, 21.

Therefore, various methods such as ozonation, oxidation, reduction, gamma-ray irradiation, photolysis, and adsorption have been suggested as potential and competitive methods to remove antibiotics from water 22, 23, 24. Of these processes, it has been demonstrated that adsorption is a simple, eﬀective, and economical method to remove pollutants from waters 25, 26. Adsorption is the widely used method for removal of a broad range of antibiotics pollutants due to its simple design, easy operation, and relatively simple regeneration 27. Currently, nanomaterials have been used by researchers to advance the removal and treatment of industrial wastewaters 28.

These nanomaterials are divided into two main categories such as nanometal and none-nano metal materials such as Fe3O4-graphene oxide (Fe3O4-GO) and graphene oxide or nano-carbon families, which are powerful and remarkable nanomaterials that could be used as a strong absorbent via their great and enormous specific surface area and minor internal diffusion resistance 29.

In present work, Fe3O4-GO was prepared to create a strong adsorbent with low prices and simple synthesis procedure to adsorb and separate the ciproﬂoxacin antibiotics from aqueous solution. The adsorption manner of CIP onto Fe3O4-GO nanocomposite was explored and the main adsorption mechanisms were surveyed in different initial CIP concentration, contact time, adsorbent dose and temperatures.

Materials: All chemical materials used were of analytical reagent grade and used without further puriﬁcation. Analytical grade CIP was obtained from Sigma Aldrich Co., and used as received; its characteristics are given in Table 1. Graphene oxide nanoparticles were manufactured by improved Hummers method 29.

TABLE 1: CHARACTERISTICS AND STRUCTURE OF CIPROFLOXACIN

Preparation of Graphene Oxide: Graphene oxide was prepared from graphite powder using a modified Hummer’s method. Firstly, a 9:1 mixture of concentrated H2SO4: H3PO4 was added to a mixture of graphite flax (3 g, 1 wt equivalent) and KMnO4 (18 g, 6 wt), producing a slight exothermal to 35-40 °C. Then the reaction was washed and the residues were centrifuged (4000 rpm for 4 h) and the supernatant decanted away. The remaining material after the multiple-wash process was mixed with 200 mL of diethyl ether. The obtained solid on the filter was vacuum-dried overnight at room temperature.

Preparation of Fe3O4-GO Nanocomposite: Firstly 15 mL of graphene oxide (2.72 mg/mL) was dispersed into 40 mL ethanol with stirring. Then 0.9522 g of FeCl3•6H2O (3.5228 mmol) and 1.0520 g of FeSO4•7H2O (3.7842 mmol) were dissolved in 10 mL of distilled water under sonication and solution was injected dropwise into the graphene oxide suspension and stirred for 0.5 h. The resulting mixture was heated to 68 °C before the ammonia solution was added to adjust the pH to 10. The mixture was stirred at 68 °C for 2 h and cooled to room temperature. The Fe3O4-GO composite was separated from the mixture using a permanent magnet and rinsed two times with ethanol and distilled water, respectively before being dried at 65 °C for 12 h.

Adsorption Study: Batch adsorption experiments were carried out using a shaker. The effects of contact time, CIP concentration, adsorbent dose and temperature on adsorption were investigated. For each experimental run, 0.5 g adsorbent and 100 mL of CIP solution of known concentration were transferred into a flask and agitated by shaker at a constant speed of 180 rpm with a required adsorption time. At predetermined time intervals, the solutions were centrifuged at 3600 rpm for 10 min. The adsorption kinetics was determined by analyzing adsorption capacity from the aqueous solution at different time intervals. Kinetics solution of different concentrations in the range of 273-318 K was agitated until the equilibrium was achieved.

Where, C0 and Ce are the initial and equilibrium concentrations of CIP (mg/L), m is the mass of sorbent (g), and V is the volume of solution (L). 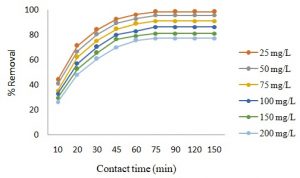 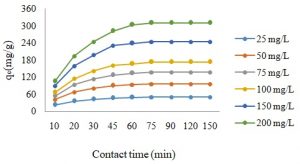 As the surface adsorption sites become exhausted, the uptake rate is controlled by the rate at which the adsorbate is transported from the exterior to interior sites of the adsorbent. Almost 70% of the total CIP molecule was adsorbed in the initial 10 min period and remained almost unchanged after 75 min, indicating that the adsorption process has reached equilibrium. 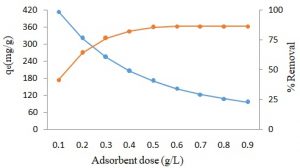 Adsorption Kinetics: Adsorption kinetics experiments were to study the impact of contact time and assess the dynamic characteristics. The amount of Fe3O4-GO was added to 200 mL CIP solution, adsorption amount at time t is calculated by the following formula: 39

Where, qt is the adsorption capacity of Fe3O4-GO at time t (mg/g), V is the volume of the solution (L), C0 is the initial concentration of CIP (mg/L) Ct is the concentration of the sample at time t (mg/L). Four kinetic equations: pseudo-ﬁrst-order kinetic, pseudo-second-order kinetic, ﬁlm diffusion model and intraparticle diffusion model were examined to ﬁt the experimental data. They are listed below:

The analysis results obtained by linear regression were summarized in Table 2. The Lower R2 and large ∆q (%) showed that the pseudo-ﬁrst-order kinetics model was not suitable for adsorption of CIP. The pseudo-second-order kinetic model can be ﬁtted to the data, which the linear correlation coefficient is higher than 0.995 at all temperature Fig. 4 and calculating the adsorption capacity and adsorption experiments relatively consistent.

Therefore the pseudo-second-order kinetic model was suitable to describe the adsorption process of CIP on Fe3O4-GO. The maximum adsorption quantity of CIP calculated by pseudo-second-order kinetic model and was 197 mg/g (273 K), 191.6 mg/g (288 K), 182.2 mg/g (303 K) and 172.6 mg/g (318 K). According to the secondary rate constant (K2) and initial adsorption rate (h), the adsorption rate slowed down with the temperature increasing. It indicated that the high temperature is not conducive to the adsorption. The adsorption process is usually controlled by either or both of them. In order to determine which one is the rate-controlling step, the intraparticle diffusion model and ﬁlm diffusion model were used to ﬁt to the results of adsorption dates. If the linear plot of qt versus t½ is a straight line through the origin, indicating that the intraparticle diffusion is the only rate-controlling step. However, from the multi-linear curve obtained in the study, indicated that two or more steps occurred in the adsorption process 44.

TABLE 2: KINETIC PARAMETERS FOR THE ADSORPTION OF CIP ONTO Fe3O4-GO 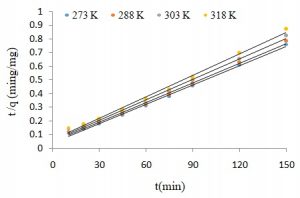 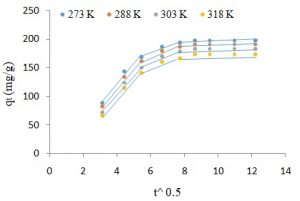 As seen in Fig. 5, the initial slope was big, which mean the adsorption rate was fast. That might be the surface adsorption or transient absorption. The second part was gradually adsorbed phase, which the liquid ﬁlm diffusion was the main controlling step. The third step is the equilibrium period, as the concentration of adsorbate in solution was very low; the intra-particle diffusion was not the controlling step anymore.

CONCLUSION: Environmental pollution caused by industrial effluents is an important issue. Biosorption of CIP from aqueous solution using Fe3O4-GO was investigated in a batch mode. The results showed that increasing the dose of the adsorbent and the contact time increased the CIP removal. So with the increase in the absorbent dosage from 0.1 to 0.9 g/L, the percentage of removal increases from 41.4 to 86.8% at initial CIP concentration 100 mg/L, whereas adsorption capacity decreases from 414 to 86.3 mg/g.

On the other hand, kinetic parameters have been investigated with pseudo-first-order, pseudo-second-order, intra-particle diffusion model and liquid ﬁlm diffusion. The result of experimental data indicates that the pseudo second-order equation fit better than the other kinetics.

ACKNOWLEDGEMENT: The authors are grateful to the Zahedan University of Medical Sciences for the financial support of this study (Project No. 9325).

CONFLICTS OF INTEREST: Authors have declared that no competing interests exist.