INTRODUCTION: Approximately 20–40% of patients with type-1 or type-2 diabetes mellitus (DM) develop diabetic nephropathy 1, 2. Diabetic nephropathy is leading cause of End stage renal disease (ESRD) and most frequent cause of mortality. Possible mediators of undesirable events happened due to hyperglycemia include participation of advanced glycation end products (AGEs) known to accumulate in diabetic subjects 3, 4.

The formation and accumulation of AGEs are characteristic features of aged or diabetic tissues and these products also have been strongly implicated in the pathogenesis of diabetic nephropathy complications 5, 6, 7, 8, 9, 10, 11 thus it accelerated our interest to assess these factors in this review. Better understanding of Advance glycation end product (AGEs) role in progression of diabetic nephropathy has a potential to lead to development of more effective drug.

The classical definition of diabetic nephropathy is a progressive rise in urine albumin excretion, coupled with increasing blood pressure, leading to declining glomerular filtration and eventually ESRD 12, 13. The diabetic nephropathy associated with long-standing diabetes 14, 15. Prevalence of diabetes mellitus is on the rise and it is estimated that there are 30 million diabetics in India, of which 6.6 million are expected to develop diabetic nephropathy (DN) 16. The majority of diabetic patients starting DN therapy have been documented type-2 rather than type-1diabetes.Therefore it will be relevant to discuss nephropathy in both type-1 and type-2 diabetes 17.

The initial rise in protein excretion is small and highly selective, albumin being the main protein excreted in excess. At this stage, specific immunologically based assays detect small increases in urine albumin which are below the detection limit of conventional dipstick tests (Table 1).

The microalbuminuria generally appears within 5–15 years duration of diabetes. Without specific intervention, over approximately a further 10 years, albumin excretion slowly increases through the microalbuminuric range, until dipstick positive or conventional proteinuria is present. Glomerular filtration generally does not begin to fall until proteinuria is present, when untreated; there is a progressive decline in glomerular filtration over a further 10 years, until ESRD is reached. Earlier literature suggested that the cumulative incidence of microalbuminuria after 30 years of type-1diabetes was approximately 50% and that 30%-40% of patients would develop proteinuria.

The incidence of proteinuria peaked at 4%-5% around 15-20 years’ duration, with a smaller peak at 30-35 years’ duration 18. However, more recently, work has shown that the appearance of nephropathy may be delayed 19, 20, 21. The cumulative incidence of microalbuminuria and proteinuria in several more recent studies is 35%-40% and 25% respectively after 25-30 years of diabetes. Initially studies suggested that 80% of type-1 diabetic patients with microalbuminuria would progress to proteinuria 22, 23.

Thus, the classical natural history of the development of nephropathy in type-1 diabetes is undoubtedly being modified. Microalbuminuria develops at around 2%-3% a year, with a cumulative incidence over a lifetime of diabetes of approximately 50%. Around one third of individuals with microalbuminuria will progress to proteinuria, at a rate of 2%-3% a year, and almost all proteinuric patients eventually develop ESRD. One small study has suggested that microalbuminuria and proteinuria may appear at any duration of diabetes, and patients with diabetes of long duration not protected kidney disease 13.

The cumulative incidence of proteinuria in type-2 diabetic patients is similar to that of type-1 patients. Several studies have demonstrated rates of development of microalbuminuria and proteinuria in type-2 diabetic patients that are approximately comparable to those in type-1 patients 29, 30, 31. In non-Caucasians, the cumulative risk of nephropathy is almost certainly higher and the disease may develop more rapidly than in Caucasian people. In Pima Indians (the most intensively studied population) more than 50% develop proteinuria within 20 years of diabetes 31. Longitudinal studies suggest that as in type-1 diabetes, glomerular filtration rate is preserved at the microalbuminuric stage. It is particularly concerning that the incidence of ESRD in the Pima Indians continues to rise despite improvements in blood glucose and blood pressure control. In other non-Caucasian populations, cross sectional studies indicate a prevalence of microalbuminuria of 30%–60% 32, 33, 34 and longitudinal studies suggest a rate of progression from normal albumin excretion to microalbuminuria of around 4% 35.

Worldwide, diabetic nephropathy is now the single commonest cause of entry to kidney replacement therapy (KRT) programmes 36. In 2001, the incidence of ESRD disease caused by diabetes was 148 per million populations in the United States, 44.3% of the population beginning KRT having diabetes. However, the proportion of new entrants to KRT with diabetes varies widely geographically.

The two most important factors in the initiation and progression of nephropathy are blood glucose and blood pressure. Dyslipidaemia is deleterious, although there is no hard evidence yet 38.

Diabetic nephropathy typically affects the network of tiny blood vessels (the microvasculature) in the glomerulus. Diabetic nephropathy includes the nephritic syndrome with excessive filtration of protein into the urine (proteinuria).When it is severe, diabetic nephropathy leads to kidney failure, ESRD, and the need for chronic dialysis or a kidney transplant. Long-standing hyperglycemia is known to be a significant risk factor for the development of diabetic nephropathy. Hyperglycemia may directly result in mesangial expansion. Increased mesangial stretch and pressure can stimulate this expansion, as of high glucose levels.   TGF-β is particularly important in the mediation of expansion and later fibrosis via the stimulation of collagen and fibronectin 39, 40. Besides, this TGF-β and various growth factors also play prominent role in membrane cholesterol homeostasis 68. Glucose can also bind reversibly and eventually irreversibly to proteins in the kidneys and circulation to form so-called advanced glycosylation end products (AGEs). AGEs can form complex cross-links over years of hyperglycemia and can contribute to renal damage by stimulation of growth and fibrotic factors via receptors for AGEs as shown in Fig. 1. 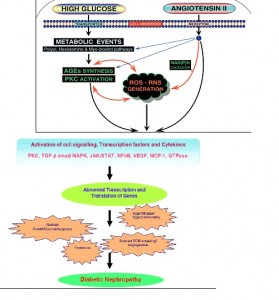 In addition, mediators of proliferation and expansion, including platelet-derived growth factor, TGF-β, and vascular endothelial growth factor (VEGF) that are elevated in diabetic nephropathy can contribute to further renal and micro vascular complications 39, 40. Proteinuria, a marker and potential contributor to renal injury, accompanies diabetic nephropathy. Increased glomerular permeability will allow plasma proteins to escape into the urine. Some of these proteins will be taken up by the proximal tubular cells, which can initiate an inflammatory response that contributes to interstitial scarring eventually leading to fibrosis.

Tubulointerstitial fibrosis is seen in advanced stages of diabetic nephropathy and is a better predictor of renal failure than glomerular sclerosis. Hyperglycemia, angiotensin II, TGF-β, and likely proteinuria itself all play roles in stimulating this fibrosis. There is an epithelial-mesenchymal transition that takes place in the tubules, with proximal tubular cell conversion to fibroblast-like cells. These cells can then migrate into the interstitium and produce collagen and fibronectin that induced fibrotic event in diabetic nephropathy.

Advanced glycation end-products (AGEs), which are biochemical end-products of non-enzymatic glycation and are formed irreversibly in serum and tissues of diabetes, 41, 42, 43 were found to play a critical role in the development of diabetic nephropathy.

Advanced glycation end products (AGE) are formed by chemical reaction of carbohydrates with protein in a process known as the Maillard or browning reaction. The AGE formation process, or the Maillard reaction, begins from Schiff bases and the Amadori product.

Reducing sugars react non-enzymatically with amino groups of proteins to form Amadori products; Amadori product, a (1-amino-1-deoxyketose) produced by the reaction of the carbonyl group of a reducing sugar, like glucose, with proteins, lipids, and nucleic acid amino groups 44, 45. The Amadori product is a precursor to AGEs, which are a more permanent, irreversible modification of proteins 46. During Amadori reorganization, these highly reactive intermediate carbonyl groups, known as α-dicarbonyls or oxoaldehydes, products of which include 3-deoxyglucosone and methylglyoxal, accumulate 47, 48.

Such build-up is referred to as “carbonyl stress” 49. The α-dicarbonyls have the ability to react with amino, sulfhydryl, and guanidine functional groups in proteins 50. The reaction results in denaturation, browning, and cross-linking of the targeted proteins 50, 51. In addition, the α-dicarbonyls can react with lysine and arginine functional groups on proteins, leading to the formation of stable AGE compounds, such as Ne-(carboxymethyl) lysine (CML), which are non fluorescent AGEs 52.

The formation and accumulation of AGEs are characteristic features of aged or diabetic tissues and these products also have been strongly implicated in the pathogenesis of diabetic nephropathy complications 5, 6, 7, 8, 9, 10, 11. AGEs are able to mediate diabetic complications by stimulating a number of mediators, including oxygen free radicals, cytokines, chemokines, adhesion molecules, TGF-β1. In response to AGEs or high levels of glucose, a potent profibrotic growth factor transforming growth factor-β1 (TGF-β1) significantly increases and leads to fibrotic consequence 53,54.

The induction of TGF-β1 emerges to be the key intermediate step for many AGE–RAGE (receptor for Adanced glycation end products)-mediated effects on cell growth and matrix homeostasis 55. Engagement of AGEs to the receptor (RAGE) has been shown to play a critical role in diabetic complications, including diabetic nephropathy 56. Indeed, AGE-induced tubular epithelial-to-mesenchymal transition (EMT) and renal fibrosis are RAGE dependent 56, 57.

Accumulation of AGEs closely correlates to TGF-β1 expression in the kidney, and inhibitors to AGEs reduce overproduction of TGF-β1 in diabetic animals independent of the glycemic status 58, 59. All of these studies suggest a critical role for TGF-β1 in AGE-mediated diabetic nephropathy. In response to AGEs or high levels of glucose, a potent profibrotic growth factor transforming growth factor-β1 (TGF-β1) significantly increases and leads to fibrotic consequence 53,54.

Available documentation addressed that the advanced glycation end-products (AGEs), which are biochemical end-products of nonenzymatic glycation were found to play a critical role in the development of diabetic nephropathy. In fact, this compelling evidence to suggest that the formation and accumulation of AGEs mediate the progressive alteration in renal architecture and loss of renal function and those inhibitors of advanced glycation prevent the progression of experimental diabetic nephropathy 42,58,60,61,62,63,64,65,66,67. Drugs that either inhibit AGE formation or break the AGE crosslink showed a protective effect on experimental diabetic nephropathy 66, 67.

ACKNOWLEDGEMENTS: The author thanks to the entire staff member of Department of Pharmacology for help and useful comments on the manuscript.

CONFLICT OF INTEREST: The authors have no conflicts of interest to declare.