Background: With the dramatic advances in the medical science, treatment of many cancers is not just palliative, but rather curative in today’s world. The dosage regimen and the method of administration can greatly affect their efficacy and toxicity.

Aims and Objects: To study the patterns of adverse drug reaction to cancer chemotherapy and to assess the causality, severity and predictability of those adverse reactions.

Materials and Methods: The study was conducted in the department of Radiotherapy for a period of 6 months. It is a prospective study and included all in-patients & outpatients with adverse effects during the study period. The data was collected using ADR (adverse drug reaction) form designed by CDSCO (Centre for Drug Standard Control Organization) and statistical analysis was done using SPSS 20.

Conclusion: Chemotherapeutic drugs have a narrow therapeutic index and the dosage needed to achieve a therapeutic response usually proves toxic to the body’s rapidly proliferating cells. Hence by early detection of the reaction and by prophylactic management, treatment can be made effective.

INTRODUCTION: Adverse Drug Reactions (ADRs) are the fourth to sixth leading cause of death in USA. Therefore detection, prevention and management of ADRs have become an important issue in the health system 1.

According to the Centre for Health Policy Research, more than 50% of the approved drugs in the United States were associated with some types of adverse effect not detected prior to approval. After the "thalidomide tragedy" many countries have established drug monitoring systems for early detection and prevention of possible drug related morbidity and mortality 2.

World Health Organization (WHO) defines a ADRs as “any response to a drug which is noxious, unintended and occurs at doses used in man for prophylaxis, diagnosis or therapy” 3.ADRs are one of the major complications of drug therapy leading to morbidity and mortality as well as increasing cost of therapy. Many of the adverse effects of anti-neoplastics are an extension of their therapeutic action, which is not selective for malignant cells but affects all rapidly dividing cells 4.

The practice of cancer chemotherapy has changed dramatically as curative treatments for many previously fatal malignancies is employed as part of a multimodal approach to the treatment of many tumours 6.Adverse drug reactions induced by chemotherapy agents have become one of the major complications of cancer therapy that affect the patient's survival, treatment outcomes and morbidity and mortality rates 2.

The safety profile of cancer chemotherapy is not available in Manipur. So the present study was carried out to evaluate the pattern of adverse drug reactions (ADRs) in cancer patients treated with chemotherapy in tertiary care hospitals in Manipur.

MATERIALS AND METHODS: The study was conducted in the department of Radiotherapy, RIMS, Imphal for over a period of 6 months (may-october 2013).  It was a prospective, observational study. The ADR reporting forms prescribed by central drugs standard control organization (CDSCO) were used for collection of ADRs. All the cancer patients who presented with ADRs in the Radiotherapy department were included except patients on concurrent Radiotherapy and patients with altered hepatic or renal parameters prior to chemotherapy.

An approval from the Institutional Ethics Committee for research involving human subjects was obtained before the study was conducted. Confidentiality of the patient's identity was maintained.

Evaluation of data: Reported ADRs were analyzed with respect to the nature, type, time of onset and duration of the reactions, characteristics of the drugs involved, and their causality, severity and predictability.

Mild ADRs were self-limiting and able to resolve over time without treatment and do not contribute to prolongation of length of stay.

Moderate ADRs required therapeutic intervention and hospitalization prolonged by 1 day but resolved in 24 hrs or change in drug therapy or specific treatment to prevent a further outcome.

Severe ADRs were life threatening, producing disability and those that prolonged hospital stay or lead to hospitalization, required intensive medical care, or lead to the death of the patient.

Predictability assessment:  The Council for International Organizations of Medical Sciences guidelines for preparing core clinical-safety information on drugs was adapted for assessment of predictability 9. Patients who have had the drug on previous occasion(s): If the drug was previously well-tolerated at the same dose and route of administration, the ADR is not predictable; if there was a history of allergy or previous reactions to the drug, the ADR is predictable. Patients who have never had the drug previously: Incidence of the ADR reported in product information or other literature determines its predictability.

Anaemia (27%) was the most commonly encountered ADR followed by neutropenia (23%) as shown in figure 3.

According to the Naranjo's algorithm, nearly 37.5% of the reactions were probable in causality, 33.9% definite and 28.6 % possible as shown in figure 4.

The Council for International Organizations of Medical Sciences guidelines (CIOMS) for preparing core clinical-safety information on drugs was adapted for the assessment of predictability.

TABLE-2: AGE DISTRIBUTION OF THE PATIENTS

TABLE 3: SEX DISTRIBUTION OF THE PATIENTS 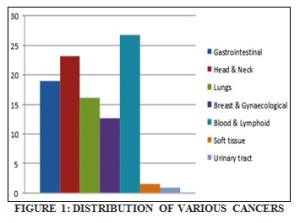 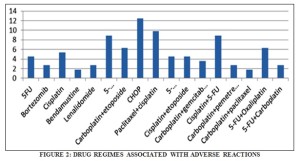 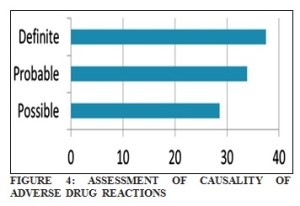 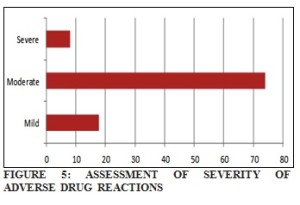 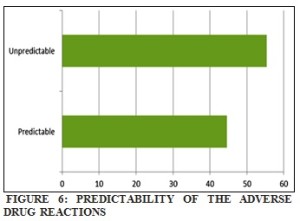 DISCUSSION: A total of 224 adverse reactions were noted in 178 patients. On an average number of ADRs per person was 1.25. ADRs were more common in females (60.7%) than in males (39.3%). This is probably because of their smaller body size and mental make-up 10.ADRs were common in the adult & elderly age group 54.5% (40-60 age gr) and 32.1% (60 & above). This may be because of increased incidence of cancer in the elderly, decreased metabolism of drugs and associated co-morbidities like diabetes mellitus & hypertension. Our finding also correlates with the study conducted by Podar et al 11.

Surprisingly, the incidence of GI symptoms like nausea & vomiting were less common. This may be due to increased & regular use of pre-medications like proton pump inhibitors and anti-emetics like ondansetron prior to chemotherapy. Advances in the development of supportive care in oncology, for example, 5HT3 antagonists for the control of chemotherapy-induced nausea, have led to reductions in drug-related toxicity. There is evidence to show that medical perspectives do not necessarily coincide with those of patients who are being treated 14, 15. Blood related ADRs were seen mostly during second or third week following chemotherapy. There was no change in regimen because of ADR but dose was reduced to tolerable dose in few cases.

Most of the ADRs were mild (17.9 %), moderate (74.1%) in severity with only 8% of ADRs in severe category. 5% of patients required hospitalisation because of ADR. This shows that ADRs are due to cancer chemotherapy are rarely life threatening with appropriate pre-medications and early detection. According to Naranjo's scale, 33% of the ADRs were definite. This is because of un-certainity of whether the reaction was due to chemotherapy or disease process. According to CIOMS guidelines 44.6% of ADRs were predictable either based on earlier response or from clinical practice. However, only few of the predictable ADRs can be prevented. ADRs like fatigue though predictable can be prevented whereas ADRs like vomiting, neutropenia can be prevented to some extent with adequate pre-medications. The duration of the study was only for six months, a major limitation of the study. The number of patients developing the ADRs was also less.

CONCLUSION: Chemotherapeutic drugs have a narrow therapeutic index and the dosage needed to achieve a therapeutic response usually proves toxic to the body’s rapidly proliferating cells. The reactions seen are not just because of the drugs but a combined effect of the disease, patient condition and drug. Most of the reactions are either mild or moderate in severity but unpredictable.

Cisplatin-based chemotherapy has a high potential to cause various adverse effects in cancer patients.

Most of the ADRs were not preventable due to the poor predictability of the ADRs and poorly understood mechanisms to explain their cause. However, with adequate pre-medication, common ADRs like nausea and vomiting can be prevented. This brings out the possible toxicity that the treating physician should anticipate and counsel the patient adequately prior to starting of therapy. Similar studies covering more patients from different regions are needed to validate the findings of this study.

ACKNOWLEDGEMENT: The author expresses his thanks to the faculties and PGTs of the department of Radiotherapy and Pharmacology for their support.