ABSTRACT: A lectin curcin was isolated from mature seeds of Jatropha curcas L. Seeds were collected locally and purified by affinity chromatography on guar gum column. The lectin content was found to be 1.3 mg/ml. Curcin agglutinated B+ve human RBC type showing galactose and N-galactosylamine specificity. Galactose sugar was found to be the most potent inhibitor of curcin hemagglutinating activity (minimum inhibitory concentration (MIC) ≤ 50 mM). The lectin was a glycoprotein with a neutral carbohydrate content of 0.26µg/ml. The molecular mass of protein was found to be 28 kDa similar to previous reports of separation by SDS-PAGE. Curcin was stable at pH range from 4-10 while for temperature range it was stable from 10 ºC to 80 ºC for 30 min. Alignment with other lectin proteins by BLAST tool resulted into its similarity to 17 entries with 10 proteins with 100% query coverage but only RIP (Ribosome Inhibiting Protein domain) was visible in search results while carbohydrate binding domain was absent.

INTRODUCTION: Jatropha curcas L. is drought resistant, a multipurpose perennial plant belonging to Euphorbiaceae family. All parts of Jatropha plant viz. leaf, fruits, latex, and bark have been used in different aliments as traditional medicine in many countries 1. The plant exhibits antibacterial, antifungal and anticancer properties 2-4. Nowadays Jatropha is gaining importance for its oil which is regarded as potential fuel substitute 5. In addition to oil, it also provides a high protein for which it is a supplement in animal feed and manure 6. Along with all these potential applications of Jatropha in biopharmaceuticals and bioenergy production, the seeds of Jatropha curcas are found to be toxic to humans and animals.

There are reports of acute poisoning of Jatropha seeds in children, mice, brown Hisex chicks, sheep, and goats 6-9 due to curcin protein a lectin found in it 10. Curcin a lectin is Ribosome inhibition protein (RIP) 11. RIP’s exhibits different enzyme activities like RNA N- glycosidase, polynucleotide adenosine glycosidase, DNases and RNases. These RIP’s are classified as Type I and Type II ribosome inhibiting proteins. The type II RIP ricin is the most poisonous substance in the world 12.

Curcin is considered as Type I proteins which enter with difficulty inside the cell however some reports high-level toxicity for recombinant protein 13. Lectins are carbohydrate-binding proteins or glycoproteins of non- immune origin that are very specific for sugar moieties. Because of this specificity, it agglutinates cells or precipitates polysaccharides 14. An attempt to purify curcin protein from Jatropha curcas L. seeds in a single step and characterize it further for its different applications.

Preparation of Seed Meal: The fruits of Jatropha curcas L. were collected from locally grown plants around Pune, Maharashtra, India in the month of November and the plants were authenticated by Botanical Survey of India, Pune Division (BSI/WRC/IDEN.CER./2016).

Selected mature fruits were washed, sun dried for 3-4 days and divided manually into three parts (Pericarps, seed coats, embryos). The mature embryos of seeds were ground finely with a mortar and pestle defatted with two volumes of petroleum ether, at 60-70 °C for 24 h. The resulting powder was left to dry at room temperature for 24 h 10.

Extraction of Curcin: Extraction of curcin from Jatropha curcas L. was carried out according to the standard procedures 10 as follows: 100 g of mature embryos defatted powder was extracted with 1L of 5 mM-sodium phosphate buffer (SPB), pH 7.2, containing 0.2 M NaCl. The mixture was stirred on a magnetic stirrer for 2-3 h and left overnight at 4 °C. The clear supernatant was collected by centrifugation at 3000 g for 20 min. The protein was precipitated with 20%, 40%, 60%, 80% and 100% ammonium sulphate, (NH4)2SO4 saturation. 12.8 gm, 3.29 gm, 3.56 gm, 3.84 gm and 3.45 gm of solid ammonium sulphate was gradually added and the precipitate was collected for the respective saturation of proteins with constant stirring for 30-60 min. The protein fractions were desalted by dialysis for 24-48 h at 4 ºC against a flow of Sodium Phosphate buffer with 0.2 M 3, 10.

Hemagglutination Assay of Crude Protein Preparations: The sugar specificity and concentration of lectin can be assayed by hemagglutination assay 15. All protein fractions were screened for hemagglutination activity against A, B, and O blood group samples of human origin to find out the presence of lectin. IBSC and human (IHEC) ethics committee guidelines of Savitribai Phule Pune University (SPPU) were followed during the handling of blood samples. Serial two-fold dilutions of 20%, 40%, 60%, 80% and 100% saturation protein samples of 0.1 ml aliquot were incubated with 0.1 ml of 4% erythrocyte suspension on slides. The slides were observed format or button formation. The positive hemagglutination showed mat formation 15.

Protein Estimation in Crude Extracts of Proteins: Protein concentration was estimated by Lowry’s and Bradford’s methods for 20%, 40%, 60%, 80% and 100% ammonium sulphate saturation fractions 16.

FTIR Analysis: FTIR analysis was carried out of crude protein to find out components of aqueous extract.

SDS-PAGE and Native Page: The various saturation fractions of proteins viz. 20%, 40%, 60%, 80%, and 100% were run on 12% SDS-PAGE and native PAGE gel to find out some proteins present in crude extracts before its purification by affinity chromatography 10.

Affinity Chromatography for Lection Purification: Affinity chromatography is a technique used to purify proteins which bind non- covalently and reversibly to specific molecules known as ligands 18. In this study, we used guar gum beads, which has free galactose sugar (ligand) on its surface. As the protein is galactose-specific, retention of lectin curcin was expected to happen in single step purification. This is called as carbohydrate affinity chromatography of lectins.

The guar gum was purchased from Sigma Aldrich. Insoluble guar gum was cross-linked with epichlorohydrin emulsion in 25 mL 3N sodium hydroxide. Stirred the mixture vigorously until it was solidified and kept at 40º   in a water bath for 24 hours with occasional stirring followed by heating in an oven at 70 ºC. Then it was homogenized in a mortar pestle to a particle size of about 30 mm size in the presence of Sodium Phosphate buffer (pH 7.4). The homogenized guar gum was then packed into a column and equilibrated with Sodium Phosphate buffer (pH 7.4).

Then several Sodium Phosphate buffer washes were given to the column, and the absorbance of elutes was taken at 280 nm until the reading was 0.02. This was to ensure that there was no any other contaminant protein present in the column. Then 100 ul of 60% crude protein extract was applied to the column as it indicated the presence of lectin in it. The unbound proteins were washed out using sodium phosphate buffer. The 1 mL fractions were collected. The absorbance of elutes was taken at 280 nm until it became less than 0.05, to ensure all unbound protein to elute out 19. The bound protein was then eluted using 10 mM D-galactose solution, and the absorbance was taken at 280 nm. The purified sample was analyzed using 12% SDS-PAGE gel.

Estimation of Sugar in Curcin Lectin: Sugar concentration in lectin curcin was estimated by sulphuric phenol method. Absorption at 490 nm was recorded by using glucose as standard 24.

RESULTS AND DISCUSSION: Total protein is extracted from defatted deskinned seeds of Jatropha curcas L. The extraction of total protein is carried out using phosphate buffer with saline and precipitated using 20%, 40%, 60%, 80%, and 100% ammonium sulphate saturation. Desalting of protein samples is carried out by dialysis against phosphate buffer and is referred to as ‘crude protein.’ The 60% saturation gave a huge amount of precipitated protein. Protein was estimated in all ranges of percent saturation from 20% to 100% by Lowry’s and Bradford’s method. The resultant yield ranged from 0.80 mg/ml to 71.44 mg/ml with a maximum yield of 71.44 mg/ml obtained in 60% saturation. As a huge amount of total protein was precipitated in 60% fraction FTIR analysis was carried out to confirm the presence of total proteins and to ensure no other contamination was present in the given fraction. Crude protein was subjected to FTIR analysis which demonstrated peaks for N-H stretching, C=0 stretching, C=O bending, N=N bending of only amino acids representing the presence of only proteins.

In the present study affinity chromatography using guar gum for lectin was used for curcin purification. The fractions were collected. 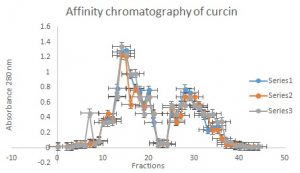 The purified samples were run on SDS-PAGE. A single band was obtained on SDS-PAGE gel Fig. 1. The absorbance of the eluted sample was 0.205 and concentration was 1.884 mg/ml. The M.W. of purified protein band on the gel was 28 KDkDa similar to the reported molecular weight of curcin. 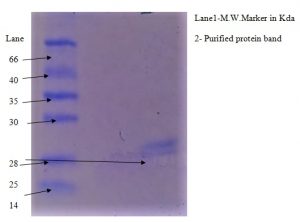 The pH and temperature stability of protein was analyzed and found to remain stable up to 4-10 pH and 80 ºC. The concentration of sugar moieties in the protein was obtained by sulphuric phenol method and found to be 0.26 µg/ml. Inhibition studies were done to check the specificity of sugar showed haemagglutination inhibition by galactose at the concentration of 50mM.

The bioinformatics studies on curcin protein were also carried out by using BLAST. The BLAST showed good query coverage and 80 to 100% similarity with very less E value. The ricin A Four proteins had more than 100% query coverage.  The max score for the given query was 636.The RIP domain was only present in the BLAST result. Though curcin lectin showed hemagglutination and sugar inhibition assay specific for galactose no conserved domain for carbohydrate binding domain was observed in BLAST results. 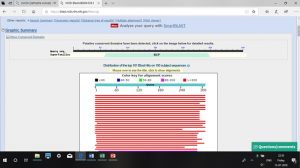 CONCLUSION: Jatropha curcas L. seed cake is reported to be a rich source of protein for animal feed due to the high content of protein. The removal of toxic protein like curing by single-step affinity chromatography purification will reduce the risk of toxicity while using as animal feed. Stability of curcin protein to high temperature and pH with its N-glycosidase and other enzymatic activities makes it a potential biomolecule for its evaluation as an antibacterial and anticancer agent. A lectin isolated from ricins cumins, i.e. ricin is also similar to curin in its activity as a molecular scalpel as has been tested against some cancer cells. It has a RIP domain similar to ricin digesting ribosomes that stop protein synthesis in cells, and Only RIP domain was observed to be present in curcin lectin during BLAST analysis. Further studies and characterization are required regarding galactose specificity of curcin lectin in the absence of carbohydrate binding domain.

CONFLICT OF INTEREST: The authors declare that there are no conflicts of interest about the material in this manuscript.