Categories Menu
Home » “AGATHIYAR KUZHAMBU”- NOT ONLY A PURGATIVE- AN OVERVIEW

ABSTRACT: The Siddha System of Medicine is one of the most ancient traditional medical systems was popular in the ancient Southern part of India. In this system, the herbals, metals, minerals and animal products have been used to prepare the medicines for treating diverse illness. Siddha medicines are divided into inner drug treatments and external drug treatments. Agathiyar Kuzhambu is one among the 32 internal medicines contains 11 ingredients which has a vast area of indications. Agathiyar kuzhambu is mainly used as purgative medicine. But its action changes widely based on the adjuvant or vehicles used along with it. Being an internal medicine, it not only shows its action internally but also externally. Its external applications sometimes act surprisingly and effectively which gives evidence for its therapeutic action mentioned in the literature. This review describes the phytochemicals and medicinal uses of the part of each ingredient used in this formulation. Ingredients of the formulation and their pharmacological action in various research studies are discussed in this review.

INTRODUCTION: The Siddha System of Medicine originated from the Southern part of India is one the major traditional medical system. It mainly dealt with spiritual and psychosocial well-being of every human. This system mainly helps to attain eternal bliss to prevent mortality. The heritage of medical knowledge was further developed by Siddhars, a group of saints with the goal of immortal human body and soul 1. The Siddha system of medicine is 32 forms of Internal medicine were described in Gunapadam Siddha text literature. Kuzhambu is the one form of internal medicine in which mercurial compounds are ground individually or with other raw drugs into a semisolid form or prepared in a specific process if mentioned 2.

Agathiyar Kuzhambu is one among the Herbo-Mineral formulation contains 11 ingredients which is mentioned in the Siddha formulary of India - part -1. This drug with proper adjuvant and correct dosage, it can cure many diseases 3. The drug review of ‘Agathiyar Kuzhambu’ is a Herbo - Mineral formulation gives evidence for its therapeutic action mentioned in literature. The major ingredients of this drug are Perungayam, Kadugu, Induppu, Rasam, Vengaram, Naabi, Manosilai, Omam, Aritharam, Karunjeerakam, Nervalam. The images of the ingredients of Agathiyar kuzhambu are shown in Fig. 1. This review describes the phytochemicals, action and medicinal uses of the part of each ingredient used in this formulation. Ingredients of the formulation and their pharmacological action in various research studies are discussed in this review.

Agathiyar Kuzhambu is a Herbo-mineral Siddha formulation containing 11 ingredients of herbal and mineral origin their specific and individual locality names, action, phytochemistry, and Siddha medicinal uses are tabulated below in Table 1. 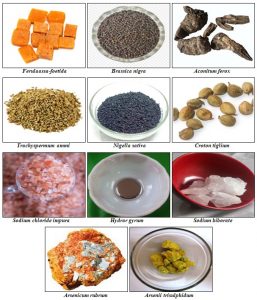 The Pharmacological Activity of Individual Raw Drugs in Agathiyar Kuzhambu:

2. Relaxant Effect: The relaxant effect of asafoetida was due to the potent inhibitory effect of the asafetida extract on the muscarinic receptor and also due to the partial inhibitory property of the herb on the histamine (H1) receptor 9.

3. Antifungal Activity: The 95% ethanolic extract of the dried gum was found active on the agar plate. Sitara et al., reported the antifungal effect of asafoetida oil against Microsporum gypseum and Trichophyton interdigitale.

It was observed that essential oil obtained from the rhizome was against the species above at a concentration of about 400 ppm on an agar plate, it also showed mild activity against Trichophyton equinum 10, 11.

5. Anti-Diabetic Activity: The antidiabetic activity of aqueous extract of asafoetida against pancreatic β-cells damaged from alloxan-induced diabetes in rats. Asafoetida led to a significant reduction in blood glucose level and an increase in serum insulin level. It was observed that the level of glucose in animals subjected with alloxan was 10.28 ± 0.85 mmol/l whereas the level of glucose in the diabetic group treated with asafoetida extract was found out to be 6.75 ± 0.31.

6. Hepatoprotective Activity: The experimental data suggested that herbal suspension of the extracts showed promising activity against the carbon-tetrachloride induced hepatotoxicity 15.

7. Antihaemolytic Activity: The antihaemolytic activity of the aqueous-ethanolic extracts of flower, stem and, leaf of Ferula asafoetida regel against H2O2 induced hemolysis in rat erythrocytes and it was observed that extracts yielded better results 12.

4. Anti-Diabetic Activity: In streptozotocin-induced diabetic rats treated with aqueous, ethanol, acetone and chloroform extracts of the seeds of Brassica nigra, the increase in serum glucose value between 0 and 1 hr of glucose tolerance test (GTT) was the least (29 mg/dl) in aqueous extract treated animals, while it was 54, 44 and 44 mg/dl with chloroform, acetone and ethanol extracts respectively. Also, the effective dose of aqueous extract was found to be 200 mg/kg body weight in GTT. Administration of 200 mg/kg body weight of aqueous extract to diabetic animals once daily for one month brought down fasting serum glucose (FSG) levels. The glycosylated hemoglobin (HbA1c) and serum lipids in the treated group were much less than untreated diabetic controls 19.

1. Anti-Inflammatory Activity: (Borax) has got potent anti-inflammatory and healing properties. Hence, it has been used as a treatment in chronic tonsillitis in the form of a gargle. To ensure the scientific validity of the efficacy, a comparative study was conducted between Aspirin tablet and Tankana bhasma which was statistically analyzed. In the study, Tankana bhasma showed significant relief of symptoms that were statistically significant 21.

2. Anti-Histaminic and Bronchodilator Activity: Antihistaminic activity of Linga mathirai (LM), where borax is an ingredient, was studied in guinea pigs using histamine-induced bronchospasm where pre-convulsive dyspnoea was used as an endpoint following exposure to histamine aerosol. It was evaluated for antihistamine and bronchodilator activities, and it administrated at the doses of 100, 200 and 400 mg/kg body weight. A dose-response curve for histamine + LM is lower when compared with histamine-induced contraction (p<0.05) at the moderate dose level. The LM at moderate dose level significantly prolonged the latent period of convulsions as compared to control following the exposure of histamine aerosol 22.

3. Ovulation-Inducing and Folliculogenesis Activity: This study has been undertaken to investigate the effect of Uppu parpam on folliculogenesis, relative ovary and uterus weight and the number of ovarian surface follicles in female Wistar albino rats. Significant increase in FSH, LH and estradiol levels, ovarian and uterine weight was noticed along with increased folliculogenesis in the experimental groups treated with Uppu parpam. Thus, the results suggested the significant ovulatory response in female rats and can be used clinically in reproductive hormonal disorders and in infertility condition of female 23.

1. Relaxant Effect on Intestinal Motility in the Ileum of Rats: It has been reported that T. ammi possesses bactericidal anticholinergic and anti-histaminic activities. Also, it also has β-adrenergic stimulatory effects. In a previous report, specific effects of T. ammi on the mechanical activity of ileum both qualitatively and quantitatively were determined. Anesthetized rats were used for mechanical recording through an isolated organ bath and oscillograph in the study. The effect obtained on intestinal motility was also tested for receptors identification and differentiation with cholinergic and adrenergic agents. The results demonstrate the effective concentrations of acetylcholine causing 50% of maximum response (EC50) obtained in the presence of 0.01 extracts in all five sets of experiments, were significantly higher than those of saline (P<0.000) and also the maximum response to acetylcholine obtained in the presence of extracts were lower (P<0.000). The results of the study, therefore specified a competitive antagonism effect of T. ammi at acetylcholine receptors 24.

2. Antioxidant and Anti-Schistosomal Activity: The antioxidant and anti-schistosomal activities of the garlic extract (AGE) and NSO on normal and Schistosoma mansoni - infected mice was investigated. The Result showed that protection with AGE and NSO prevented most of the hematological and biochemical changes and markedly improved the antioxidant capacity of schistosomiasis mice compared to the infected-untreated ones. These results suggested that AGE and NSO may be promising agents to complement schistosomiasis specific treatment 26.

4. Antitumor Activity: The effect of TPA (12-O-tetradecanoyl phorbol-13-acetate) in the patient with myelocytic leukemia and marked decrease in bone marrow myeloblasts, as well as temporary remission of disease symptoms, were observed when TPA was administered alone or in combination with vit. D3 and AraC 28.

8. Genotoxic Activity: The aqueous extract of C. tiglium have the potentiality to cause genotoxic activity and it was observed that the exposure of aqueous extract cause increase plasmid DNA strand breakage in a dose-dependent manner 33.

CONCLUSION: Agathiyar Kuzhambu is a most important medicine used among the Siddha physicians which contain 11 ingredients having effective in the treatment of all types of Delirium. Based on this evidence of Siddha literature and modern scientific research studies also provide keyhole which result are Anti-oxidant, Anti-Inflammatory, Antispasmodic, Anti-diabetic activities present in ingredients. As this medicine is purgative which can be administered in lower doses, it is an excellent remedial medicine for other therapeutic uses.

ACKNOWLEDGEMENT: We are grateful to the Siddha Central Research Institute, Chennai, India to accomplish this work.