Direct genetic alterations leading to deregulated PI3K/Akt signaling are common in a significant fraction of human malignancies. Both Akt and Aurora A kinase have been shown to be important targets for intervention for cancer therapy. Nuclear Akt1 expression and Akt activation are common in cancer invasion. However, the mechanisms for this association and its causal role in invasion are uncertain. It is a key downstream eﬀector of phosphoinositide 3’-kinase (PI3K) and directly modulates a wide range of pro-apoptotic and metabolism regulating proteins. Inhibition of Akt is a signiﬁcant therapeutic goal due to the prevalence of activating mutations in the PI3K/Akt pathway.

INTRODUCTION: AKT protein family, which members are also called protein kinases B (PKB) plays an important role in mammalian cellular signaling. The serine/threonine kinase Akt, or protein kinase B, has recently been a focus of interest because of its activity to inhibit apoptosis. It mediates cell survival by acting as a transducer of signals from growth factor receptors that activate phosphatidylinositol 3-kinase. Akt1 is involved in cellular survival pathways, by inhibiting apoptotic processes. Akt1 is also able to induce protein synthesis pathways, and is therefore a key signaling protein in the cellular pathways that lead to skeletal muscle hypertrophy, and general tissue growth.

Since it can block apoptosis, and thereby promote cell survival, Akt1 has been implicated as a major factor in many types of cancer. Akt (now also called Akt1) was originally identified as the oncogene in the transforming retrovirus, AKT8 1. AKT8 was isolated from an AKR mouse spontaneous thymoma cell line by cocultivation with an indicator mink cell line. The transforming cellular sequences, v-akt, were cloned from a transformed mink cell clone and these sequences were used to identify Akt1 and Akt2 in a human clone library. AKT8 was isolated by Stephen Staal in the laboratory of Wallace P. Rowe; he subsequently cloned v-akt and human AKT1 and AKT2 while on staff at the Johns Hopkins Oncology Center 2.

Akt2 is an important signaling molecule in the Insulin signaling pathway. It is required to induce glucose transport. These separate roles for Akt1 and Akt2 were demonstrated by studying mice in which either the Akt1 or the Akt2 gene was deleted, or "knocked out". In a mouse which is null for Akt1 but normal for Akt2, glucose homeostasis is unperturbed, but the animals are smaller, consistent with a role for Akt1 in growth. In contrast, mice which do not have Akt2, but have normal Akt1, have mild growth deficiency and display a diabetic phenotype (insulin resistance), again consistent with the idea that Akt2 is more specific for the insulin receptor signaling pathway 3. The role of Akt3 is less clear, though it appears to be predominantly expressed in brain. It has been reported that mice lacking Akt3 have small brains 4. The name Akt does not refer to its function. Presumably, the "Ak" in Akt was a temporary classification name for a mouse strain developing spontaneous thymic lymphomas. The "t" stands for ‘transforming’; the letter was added when a transforming retrovirus was isolated from the Ak strain, which was termed "Akt-8". When the oncogene encoded in this virus was discovered, it was termed v-Akt. Thus, the later identified human analogues were named accordingly.

Signal Transduction Mediated by the PI3K/Akt Pathway: The  lipid  kinase  PI3K (Phosphoinositide 3- kinase) is involved in  the  regulation  of  a  number  of  cellular  processes,  like transcription, migration,  angiogenesis,  cell  growth,  proliferation,  apoptosis  and glucose metabolism. PI3K  is  activated by  several  hormones  including  insulin,  growth  factors  such  as EGF,  IGF(Insulin like growth factor), PDGF, NGF, HGF, by signals derived from receptors for extracellular matrix molecules such as integrins, by several forms of cellular stress such as oxidative stress or cell swelling, PI3K  phosphorylates  phosphatidylinositols  of  the  cell  membrane,  thus  generating,  e.g., phosphatidylinositol- 3, 4, 5- trisphosphate  (PIP3)  from  phosphatidylinositol-4,5-bisphosphate  (PIP2).

PIP3 at the cell membrane recruits protein kinases such as PKB/Akt and PDK1 which bind with their PH-(pleckstrin homology)-domain to PIP3. Full activation of PKB/Akt requires the phosphorylation by the  Ser473-Kinase  (PDK2:  integrin-linked  kinase-1:  (ILK-1)  or  DNA-dependent  protein  kinase (DNA-PK))  and  by  PDK1  at  Thr-308. PDK1 further activates SGK and and  aPKC. PKB/Akt,  aPKC  and  SGK  in  turn  phosphorylate  a  wide  variety  of  cellular  signaling  molecules relevant for  the regulation of cell growth, cell cycle and cell proliferation,  including FKHR, GSK3ß, mTOR  and  p70S6K,  for  apoptosis,  including Bad,  caspase  9,  IκB, FKHR, Mdm2,  or  for  transport, including  several  transporters  and  channels  (Fig.  1). PKB/Akt further activates mTOR, a kinase stimulating the uptake of nutrients such as glucose, amino acids, cholesterol and iron. mTOR regulates the phosphorylation of p70S6K which can  similarly be activated by PDK1. mTOR further activates eIF4E-binding  protein-1  and thus  is  involved  in  the regulation of translation. 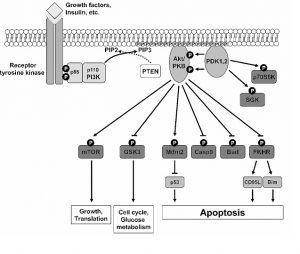 FIG.  1: REGULATION  OF  THE  PI3/AKT SIGNALING PATHWAYACTIVATION OF PI3K BY RECEPTOR TYROSINE KINASES  MEDIATES  THE  PHOSPHORYLATION OF  PIP2  TO  PIP3  AND  THEREBY  THE RECRUITMENT  OF  PKB/AKT  AND  PDK1  TO THE  PLASMA  MEMBRANE.  PKB/AKT  IS SUBSEQUENTLY  ACTIVATED  BY  THE  SER473-KINASE  (PDK2)  AND  THE PHOSPHORYLATION  AT  THR308  BY  PDK1. PTEN FUNCTIONS AS AN ANTAGONIST OF PI3K. PKB/AKT, BY PHOSPHORYLATION OF A  NUMBER  OF  INTRACELLULAR  PROTEINS, REGULATES  DIFFERENT  CELLULAR  PROCESSES LIKE  CELL  GROWTH,  CELL  CYCLE,  APOPTOSIS AND GLUCOSE METABOLISM

Activation: Akt is activated as a result of inactivation of tumor suppressor PTEN (Phosphatase and tensing homolog), a lipid phosphatase mutated or deleted in >50% of human cancers .Both Akt1 and Akt2 are commonly overexpressed or constitutively active in a large number of human cancers including brain, gastric, colon, breast, lung, and prostate carcinomas and their activation correlates to cancer progression. Activation of Akt is a multi-step process involving both membrane binding and phosphorylation. Upon PI3K  activation  and  production  of  PtdIns-3,4,5-P3  and PtdIns-3,4-P2, Akt  is  recruited  to  the plasma membrane where  it binds  to  the  these phosphoinositides through its PH domain 5. Activation is then thought to involve a conformational change and phosphorylation on two residues.   One such  phosphorylation  site  lies  within  the  kinase  domain activation  loop  (Thr  308  in Akt1)  and  is  phosphorylated  by  another  PH-domain containing protein, PDK1. In addition, a second phosphorylation site in the C-terminus (Ser 473 in Akt1) is required for full or maximal activity. Growth factor stimulation of PI3K activity leads to Akt activation.  Conversely, PI3K inhibition (i.e. using chemical inhibitors such as wortmannin or LY294002) and PTEN mediated dephosphorylation of PtdIns-3, 4, 5-P3 and PtdIns-3,4-P2  results in inhibition of Akt.  After activation, Akt can phosphorylate a number of substrates both in the cytoplasm and in the nucleus.

Function: Akt implication in different processes characteristic of cancer which summerised as follows:

Akt inhibitors as Anticancer: These are the novel agents which inhibit proliferation, and reverse the repression of apoptosis and the resistance to cytotoxic therapy in cancer cells. Inhibitors of proteins that are involved in several PI3K/Akt signalling pathways have been under development for some time, and some have now entered clinical trials. These include inhibitors that target both upstream regulators of PI3K/Akt, such as growth factor receptors, and downstream effectors, such as the components of the mTOR pathway. Drug falling these category are summarized in the Table 1.

Akt in Ovarian Cancer: A study of 91 ovarian cancer specimens revealed elevated levels of p-Akt 2 (Ser 474) in 33 cases (36.3%). Most tumors displaying activated Akt 2 were high grade and in stages III and IV. p-Akt 2 in tumor specimens localized to the cell membrane and cytoplasm but not the nucleus. Five cases displayed elevated p-Akt 1 (Ser 473) but not p-Akt 2 6. In another investigation of human ovarian cancer, a tumor tissue microarray with a pan–p-Akt (Ser 473) antibody revealed elevated staining in 21 (68%) of 31 ovarian carcinomas. p-Akt staining was associated with activated phospho-mTOR in 27 (87%) of 31 ovarian tumors 7.

Akt in Prostatic and Renal Adenocarcinomas: Immuno- histochemical staining of p-Akt (Ser 473) in a study of 74 biopsy specimens of resected prostate cancer was significantly greater in cases with Gleason grades 8 to 10 (92% of such cases staining strongly) compared with prostatic intraepithelial neoplasia (PIN) and all other grades of prostate cancer. Only 10% of the latter cases stained strongly 8.

Akt in Gastrointestinal and Pancreaticobiliary Carcinomas: In a study of 65 patients with pancreatic ductal adenocarcinomas, a significant positive correlation between high p-Akt and Akt 2 expression and low 5-year survival rate was observed; suggesting p-Akt was a useful prognostic indicator 9. 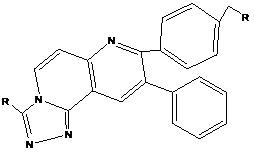 CONCLUSION: In conclusion, direct genetic alterations leading to deregulated PI3K/Akt signaling are common in a significant fraction of human malignancies. The phosphoinositide 3-kinase (PI3K)/AKT pathway has been shown to be central in the promotion of cell survival since the alteration of this signalling cascade is a frequent event in human malignancies. Cellular processes regulated by AKT include cell proliferation and survival, cell size and response to nutrient availability, intermediary metabolism, angiogenesis, and tissue invasion. All these processes represent hallmarks of cancer.