ABSTRACT: Microbial enzymes such as amylase, lipase and protease are commercially significant and have widespread applications in many industries like pharmaceutical, leather, detergent, textile and other industries. Many haloalkaliphilic Bacillus species in hyper saline environment produces various types of commercially important enzymes such as lipase. A total of twelve Bacillus strains were isolated from Lonar crater and screened for lipase production on egg yolk agar medium. A Bacillus species (DHT 25) was found to be a prominent lipase producer which was later on identified by various morphological, cultural, biochemical and 16s rRNA sequencing as Bacillus flexus. Alkaline lipase production and activity recorded optimum at pH 9; at temperature 60°C, and enzyme concentration at 7mL and substrate concentration at 3mL. Lipase from this bacterial strain was active at higher temperature and pH and may find potential applications in food, pharmaceutical and detergent industries.

INTRODUCTION: As far as Indian soda lakes are concerned, a culture-dependent approach has been poorly applied to analyze bacterial diversity hence the strategy was applied to explore the diversity of aerobic bacteria from Lonar Lake 1. Lonar Lake is biologically diverse and support large number of endemic and threatened species. It is a great economic and cultural importance and serves as a source of salt; recreation and tourism. Alkaliphilic microorganisms offer a multitude of actual or potential application in various fields of biotechnology. Not only do many of them produce compounds of industrial interest, but they also possess useful physiological properties, which can be facillated their exploitation for commercial purpose.

The extreme environment of Lonar Lake harbours a wealth of microorganisms such as alkaliphilic and halo-tolerant bacteria that have potential in producing extracellular enzymes 2. Moderately halophilic bacteria constitute the most versatile group of microorganisms that could be used as a source of salt-adapted enzymes. These have advantage over extreme halophiles in that they do not have a strict salt requirement and grow under wide salt range 3. Diversity of moderate halophilic bacteria from the Indian origin are well studied from the coastal regions however very few reports are available from the saline-soda lake.

The biota of Lonar Lake microorganisms has developed unique metabolic and physiological functions that not only ensure survival in extreme habitats, but also offer a potential for the production of novel extremozymes for industrial application. The majority of the alkaliphiles have been isolated from soda Lakes 4 - 6. Studies on alkaline enzymes have concentrated largely on those organisms which have been easily observed in the natural environment such as alkaliphilic Bacillus species. These multi-faceted enzymes have tremendous potential in area such as detergent, food technology, pharmaceutical, leather, chemical industry, biomedical science, cosmetic, Industrial waste management and in pulp and paper industry and  improve quality in dairy, textile, waste water treatment 7. Lipases cause hydrolysis of triglycerides releasing fatty acids and glycerol. Bacteria can produce many classes of lipases such as triacylglycerol lipase (EC 3.1.1.3) and carboxy-lesterases (EC 3.1.1.1). True lipases belong to the category of carboxylesterases which result in production of acylglycerols having acyl chain lengths of more than ten carbon atoms 8. The alkaline lipase produced by bacteria are of great importance’s in detergent and leather industry and it is most important industrial enzymes accounting for about 60% of total enzyme market. Very small work has been performed on lipase producing bacteria, which can withstand high temperature and pH 9. To fulfil the demand such lipase in industries; isolation and production of lipase enzyme is most important. Hence, the attempt was made to isolate and characterize the lipase producing bacterial strain from the hyper saline environment.

Isolation and Screening of Bacterial Alkaliphiles: A total of 12 samples were collected from 4 different sites of Lonar Lake (3 each - water, sediment and matt) and transported to laboratory for isolation and identification of lipase producer bacilli. The samples were enriched by sub culturing four times repeatedly in Horikoshi medium (A, B, C and D) and isolated strain further studied for its characterization. The isolated individual bacterial colonies were screened for its lipolytic activities on egg yolk agar (egg yolk 1%, Peptone 1%, yeast extract 1%, beef extract 1%, sodium chloride 0.5%, Agar-Agar 2%, pH 10) and the zones of lipid hydrolysis were observed. The bacterial strain with prominent zone of clearance on egg yolk agar medium was processed for identifications based on morphological, cultural and biochemical characteristics.

Determination of Lipolytic Activity: To 100mL of sterile alkaline nutrient broth, 1mL egg yolk was added and inoculated with bacterial culture for 72 hr. The growth is then centrifuged at 5000 rpm for 15 min and the supernatant was served as crude enzyme sources for extracellular lipase. Lipase activity in the synthetic media was determined titrimatrically on the basis of olive oil hydrolysis by the slightly modified method of Kempka 10. Assay mixture containing 180mL of distilled water, 20mL olive oil, 0.4g sodium benzoate with 1g gum arabic, 5 mL 0.1M tris buffer and add 1mL culture supernatant at pH 10 such type of master mixture was incubated at 40 °C for 30 min and the reaction was stopped with 10mL of acetone and methanol mixture (1:1). Liberated fatty acids were titrated with 0.025N NaOH using 1% phenophthalein as indicator. Lipase activities were finally measured in terms of lipase unit which is calculated as follow.

RESULTS AND DISCUSSION: In the present study, a total of 12 different bacterial species were isolated from water, sediment and matt samples of Lonar Lake. The samples were enriched in Horikoshi medium (A, B, C and D) and isolated Bacilli species screened for lipase production on selective egg yolk agar. On basis of screening, 6 were isolated as lipase producers, out of which a bacterial strain DHT 25 was found to be prominent lipase producer, zone of lipid hydrolysis 26mm (Fig. 1). The DHT 25 bacillus species was characterized morphologically, culturally, biochemically and identified as Bacillus flexus by 16S rRNA sequencing (Table 1). The Bacillus flexus strain showed catalase and oxidase positive. Indole, methyl red and Vogues Proskauer’s test were negative and citrate was utilized, nitrate was reduced to nitrite and unable to hydrolyze the urea.

The Bacillus flexus strain showed catalase and oxidase positive. Indole, methyl red and Vogues Proskauer’s test were negative and citrate was utilized, nitrate was reduced to nitrite and unable to hydrolyze the urea.

Few moderate alkaliphilic strains especially represents the genus Bacillus, are able to produce extracellular lipase, amylase and proteases that are even active at alkaline pH 11, 12. 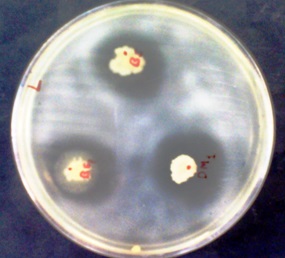 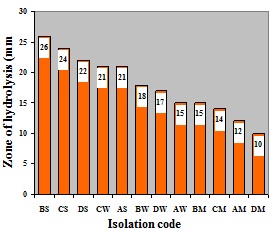 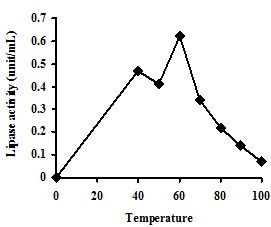 FIG. 3: EFFECT OF TEMPERATURE ON ACTIVITY OF LIPASE ENZYME

The effect of temperature and pH on enzyme activity was determined at different temperatures and pH and the optimum activity was recorded at 60 °C temperature (Fig. 3) and pH 9 (Fig. 4). Such thermal stability distinguishes the lipase produced by strains of Bacillus pseudofirmus and Bacillus alcalophilus from other thermostable lipases producing Bacilli 13. 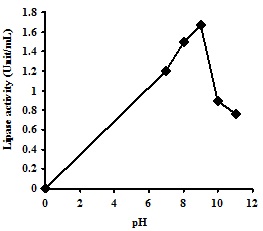 FIG 4: EFFECT OF pH ON ACTIVITY OF LIPASE ENZYME 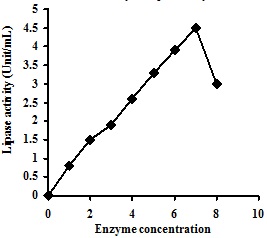 FIG. 5: EFFECT OF ENZYME CONCENTRATION ON ACTIVITY OF LIPASE ENZYME 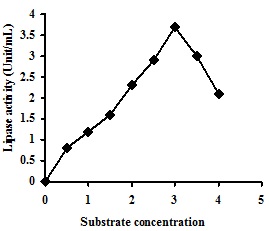 FIG. 6: EFFECT OF SUBSTRATE CONCENTRATION ON ACTIVITY OF LIPASE ENZYME

As the substrate concentration increases the enzyme activity also increases up to the optimum level after which it decreases. Optimum enzyme concentration of isolate Bacillus flexus for lipase was found to be at 7mL (Fig. 5) and optimum activity at 3mL substrate, olive oil (Fig. 6). Similarly, Tambekar and co-workers 14 studied the production and characterization of lipase from haloalkaliphilic methylotrophs from Lonar Lake and recorded a Bacillus species Pseudomonas aeruginosa was prominent lipase producer. The present study is concurred with previous studies on lipase enzyme producer from Lonar Lake.

CONCLUSION: In the present study, different Bacillus species were isolated from water, sediment and matt sample of Lonar Lake. Out of them, the isolate Bacillus flexus was screened for production and partial characterizations of lipase. Alkaline lipase activities were optimum at pH 9, at temperature 60 °C, at 7mL enzyme concentration and at 3mL olive oil as substrate. The isolated Bacillus flexus strain produces the lipase which is thermostable, alkaliphilic and has potential to use in food, pharmaceutical and detergent industries. However, our studies revealed that traditional cultivation based methods have the great potential in research providing the opportunity for investigator to isolate biotechnologically important bacillus species under laboratorial conditions.  Lonar Lake studies indicated that Bacillus flexus is potential lipase producer and can exploited for its biotechnological potential which also provides a framework for further studies of these evidently important habitats.