ABSTRACT: Adverse drug reactions in the form of toxic epidermal necrolysis is a rare but potentially fatal disorder. The pathophysiology of such reactions are not properly understood. There are many drugs which are very often implicated for causing such severe reactions. Allopurinol is a common drug used in chronic gout but also notorious for causing Steven - Johnson syndrome and rarely toxic epidermal necrolysis. Very often such reactions may cause severe morbidity and even mortality. Here, we describe a case of fatal toxic epidermal necrolysis caused probably due to allopurinol use in a 62 year old male. The event required immeditae reporting as it lead to the death of the patient. Immediate treatment is essential for combating such reactions and caution should be practised while prescribing such drugs. Moreover intense reporting of such cases will help us in understanding the pattern of such reactions and take necessary and timely action.

INTRODUCTION: In recent times, there has been an alarming rise in the exposure of human being to a variety of drugs. This has led to an increase in the incidence of severe adverse drug reactions due to drug use. Toxic epidermal necrolysis (TEN) is a rare, acute and life-threatening mucocutaneous disease that is usually drug related. 1 The reported incidence varies from 0.4 to 1.2 per million for TEN and mortality is usually below 5%. 2  Drugs, such as allopurinol, are an important cause of Stevens-Johnson syndrome, but infections or a combination of drugs and infections have also been implicated 3 Allopurinol is a xanthine oxidase inhibitor and has become established as the drug of choice for preventing and treating chronic gout.

We report a case of allopurinol induced Toxic epidermal necrolysis only after 2 doses of drug usage.

Case Report: A 62 year old male, presented in the emergency department of our hospital with the complaints of fever, rash and blisters all over the body since last 7 days. Detailed history revealed that the patient had long standing joint pains for which he used to take over the counter pain killers. 10 days back he was prescribed Allopurinol by a local practitioner at a dose of 300mg per day.  Only after 2 doses of the drug, he developed high grade fever with chills and rigor and generalized rash all over the body.

Rash started initially in the abdomen and chest, later spreading to other parts of the body. The rashes were initially erythematous, maculopapular and later turned into painful blisters all over the body. Ulceration also occurred at several affected areas with extensive desquamation.

After development of the rash, the patient visited a local quack to no avail. On examination, the patient was conscious and oriented to time, place and person. He was febrile with a temperature of 101oF.  His blood pressure was 110/70mm Hg, pulse rate 84/minute and respiratory rate was 20 breaths per minute. The conjunctiva was congested and oedematous. Multiple blisters were seen all over the body. Some ruptured blisters had raw ulceration and there was extensive skin denudation. Nikolsky’s sign was positive.  The body surface area involvement of the patient at the time of presentation was 50%. No prior history of such a reaction was reported. His past medical history was uneventful.

On investigations, his TLC was found to be raised at 14,000/cu mm and haemoglobin was 8.8gm/dl. His serum urea was 59 mg/dl and serum creatinine 2.6 mg/dl. Albumin level was 2.5gm/dl, S bilirubin- 1.3mg% , SGOT - 31 , SGPT-22, ALP-112 IU/L. Abdominal ultrasound and computed tomography scans were normal. He was diagnosed drug induced Toxic epidermal necrolysis and was treated aggressively with intravenous dexamethasone 6 hourly, intravenous fluids, prophylactic antibiotics, antiallergic drugs and local treatment of lesions. Topical antibiotics dressings were applied on the wounds. Adequate hydration and nutrition were ensured with intravenous fluids and a high protein diet. After 2 days, the patient’s condition deteriorated further and he was shifted to Intensive Care Unit (ICU).

Cultures from the erosions revealed secondary colonization with Pseudomonas and Candida. He also developed secondary pneumonia as seen on a chest X-ray. 2 days later he developed acute renal failure and severe sepsis and his condition deteriorated further. He died on the 5th day after ICU admission due to septic shock.

The patient had no history of previous drug induced or any allergy. The patient had even no history of any regular or long term use of drugs in the past. In the given duration, the patient had not taken any other such drug which could be attributed to cause such lesions. Dechallange and rechallange could not be done.  The Naranjo's score was 6 and W.H.O causality assessment showed probable correlation with the current adverse event 4 5. On assessment with Hartwig’s severity scale 6, the severity of the reaction was found to be serious and potentially life threatening. 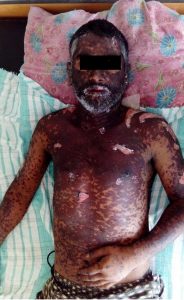 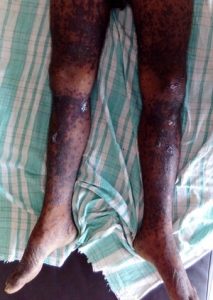 FIG. 2: LESIONS IN THE LOWER EXTREMITIES 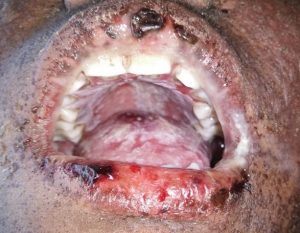 DISCUSSION: Allopurinol is the first line drug for lowering serum uric acid in gout. It is generally considered to be a safe and well tolerated drug 7. The average time of onset of SJS/TEN after starting allopurinol is around 20 days 8. TEN is a rare disease with high mortality of around 30%. The majority of cases of TEN are drug induced, commonly implicated drugs being antibiotics, anti convulsants, NSAIDs, allopurinol 9. Other possible causes include infections, immunizations, environment chemicals and radiation therapy 10. In a case series published from a tertiary care centre in Singapore, allopurinol was found to be the most commonly associated drug causing Stevens-Johnson syndrome and toxic epidermal necrolysis 11. Recently it has been reported that HLA-B*5801 seems to be a genetic marker for developing this syndrome 12  and that hypersensitivity reactions are primarily mediated by oxypurinol specific T-cell response 13 . Hence, utmost caution must be adhered while prescribing such drugs.