ABSTRACT: Introduction: Control of blood glucose level is a critical approach in the management of diabetes mellitus and its complications. This study investigated the α-amylase inhibition and erythrocyte membrane stabilization effect of extracts of Maesobotrya dusenii Hutch. Method: Powdered stem bark of M. dusenii (100g) was extracted with methanol. The plant material (400 g) was also successively macerated with N-hexane, ethyl acetate, and methanol. Phytochemical screening was conducted on the powdered stem bark. All the extracts were evaluated for alpha-amylase inhibition at 10, 20, 30, 40 and 50 µg/mL concentrations using acarbose as standard drug and erythrocyte membrane stabilization at 20, 40, 60 and 80 µg/mL concentrations using diclofenac as standard drug. Gas Chromatography-Mass Spectroscopy (GC-MS) of the hexane extract was analyzed. Result: Phytochemical screening showed the presence of carbohydrates, saponins, and triterpenoids. All the extracts showed a dose-dependent response on alpha-amylase inhibition in which crude methanol had a significant activity of 56.7% inhibition. N-Hexane, ethyl acetate, and crude methanol extracts showed erythrocyte membrane stabilizing effect, but crude methanol showed the most activity with 183.3% inhibition of erythrocyte membrane stabilization and IC50 of 70 µg/mL against diclofenac 28.4 µg/mL. The GC-MS revealed hexadecanoic acid and six other compounds that were fully characterized by database. Conclusion: The study showed that crude methanol extract has significant alpha-amylase inhibitory and anti-inflammatory activity than other extracts. The study justifies the use of M. dusenii in the management of diabetes.

INTRODUCTION: Diabetes mellitus is a group of metabolic disorders with a common underlying feature of hyperglycemia. Along with hyperglycemia, diabetes is associated with micro and macro-vascular complications, which are the major causes of morbidity and death.

With the increased prevalence of diabetes in our world and the inadequacies of orthodox medicine, more natural remedies are sort for to curb this. Traditional medicinal plants having anti-diabetic properties can be a useful source for the development of safer and effective oral hypoglycemic agents. More than 350 traditional plants used in the treatment of diabetes mellitus have been recorded in which Maesobotrya dusenii is no exception 1.

The rate of diabetic patients with complications such as stroke, hypertension, nephropathy, neuropathy, retinopathy, cardiovascular diseases, and skin lesions are increasing daily. To curb this menace, there is need to majorly optimize metabolic control, prevent complications and also optimize the quality of life 2, 3. Alpha-amylase is a protein enzyme that hydrolyzes alpha bonds of large alpha-linked polysaccharides such as starch and glycogen, yielding glucose and maltose. It begins the process of starch digestion by taking starch chains and breaking them into smaller pieces with two or three glucose units 4. The inhibition of α-glucosidase and α-amylase enzymes involved in the digestion of carbohydrates can significantly reduce the post-prandial increase of blood glucose and therefore be an important strategy in the management of blood glucose level in type 2 diabetic and borderline patients. Natural α-amylase inhibitors from plant sources offer an attractive strategy for the control of hyperglycemia 5.

Anti-inflammatory agents are substances that reduce inflammation (redness, swelling, and pain) in the body. Lysosomal enzymes released during inflammation produce a variety of disorders which lead to tissue injury. Stabilization of lysosomal membrane is important in limiting inflammatory response which can be achieved by inhibiting the release of lysosomal constituents of activated neutrophil that causes further tissue inflammation and damages upon extracellular release 6.

Maesobotrya dusenii Hutch. belong to the family Euphorbiaceae. The bark and leaves are used in the treatment of skin infections, spots, gonorrhea, dysentery, and diabetes in Nigeria 7, 8. This study, therefore, investigates the effect of the plant in the treatment of diabetes through inhibition of alpha-amylase and stabilization of red blood cell membrane as an anti-inflammatory model.

Plant Material: Maesobotrya dusenii stem bark was collected from farmland in Omuike, Aluu, Ikwerre Local Government Area of Rivers State. The plant was identified and authenticated in Herbarium of the Department of Pharmacognosy and Phytotherapy, Faculty of Pharmaceutical Sciences, the University of Port Harcourt where the specimen was deposited with voucher number UPHE307. The stem bark was air-dried at room temperature, pulverized and preserved for further use.

Phytochemical Screening: Phytochemical screening was performed on the powdered stem and extracts to detect the presence of secondary metabolites using standard procedures 9, 10.

Alpha-Amylase Inhibition Assay: The alpha-amylase inhibition assay was performed using modified chromogenic method11. A 0.5g of porcine alpha-amylase (EC 3.2.1.1, type VI, Sigma) was dissolved in 100mL of ice-cold distilled water to give a 0.5% w/v solution and potato starch (0.5% w/v) in 20 mM phosphate buffer (pH 6.9) containing 6.7 mM Sodium Chloride was used as a substrate solution. The n-hexane and ethyl acetate extracts were each dissolved in 1 ml DMSO and the methanol extracts in 1 ml distilled water (10, 20, 30, 40, 50 µg/mL), followed by 1 ml of alpha-amylase solution and allowed to incubate for 5minutes at 25 °C. A 1 ml of potato starch solution was added, and the mixture was further incubated for 5 min at 25 °C. The reaction was then stopped by adding 1 ml DNS reagent and boiled at 90 °C in a water bath for 15 min. The cooled reaction mixture was then diluted with 1 ml of distilled water. The absorbance of the test, blank (without alpha-amylase) and control (without extract mixture) were measured at 540 nm using UV- spectrophotometer. Percentage inhibition was calculated using the formula:

The concentration of extract exhibiting 50% inhibition of enzyme activity was graphically determined.

Membrane Stabilizing Assay: Stabilization of red blood cell membrane lysing technique by Shinde et al. (1999) was used to assess the anti-inflammatory activity of the extracts 12. A 5 ml of fresh whole human blood was collected and transferred to an ethylene-di-amine tetra-acetate (EDTA) centrifuge tube. The tube was centrifuged at 2000 rpm for 5 min and washed with normal saline. This was repeated two times with an equal volume of normal saline. The volume after centrifuging was measured and constituted as a 40% v/v suspension with isotonic phosphate buffer solution (pH 7.4). The buffer solution (5 ml) containing 20, 40, 60 and 80 µg/mL on each of the methanol extracts and DMSO (5 ml) containing same concentrations of hexane and ethyl acetate extracts were put in sets of four (4) centrifuge tubes per concentration and the control tubes containing 5 ml of vehicle, 5 ml of diclofenac 20, 40, 60 and 80 µg/mL. Unto each of the tubes, 0.005 ml (0.5µg/mL) erythrocytes suspension was added and gently mixed.

A pair of the tubes from each set was incubated at 54 °C for 20 min in a regulated water bath, and the other pair was maintained at 0-4 °C in ice for 20 min. At the end of the incubation, the reaction mixture was centrifuged at 1000 rpm for 3 min, and the absorbance of the supernatant was measured using the spectrophotometer at 540 nm. The percentage inhibition of hemolysis was calculated using the formula:

GC-MS Characterization of n-hexane Extract: This was done on the hexane extract dissolved in chloroform using an Agilent gas chromatograph Model 6890, coupled to a mass spectrometer equipped with DB DB-IMS capillary column (30 m long × 320 µm nominal diameter), programmed from 120 °C (5min) to 250 °C at 3°C /min, with 5 min hold time. Helium was used as carrier gas (1.0mL/min) with a sample injection in split mode (50:1). Injector and detector temperatures were 250 and 280 °C respectively. The mass spectrometer worked in electron impact mode at 70eV with electron multiplier at 1600 V and ion source temperature at 180 °C. Mass spectra data were acquired in the scan mode in m/z range 50-550. The compounds characterized in hexane were identified by comparing their mass spectra and retention times with those of reference compounds in the NIST library. A quality factor >94 used as a criterion for acceptance.

RESULTS AND DISCUSSION: The phytochemical screening results obtained from the powdered stem bark of M. dusenii showed the presence of carbohydrates, saponins, and triterpenoids as reported present in the leaves 8. From Fig. 1, the crude methanol extract showed a dose-dependent inhibition of the alpha-amylase although the standard drug (Acarbose) was higher in percentage (64%) than the crude methanol (56.7%) at 50 µg/mL respectively. The extracts obtained from successive extraction with n-hexane, ethyl acetate and methanol exhibited a different pattern of activity in Fig. 2. The n-hexane and ethyl acetate showed  highest percentage inhibition of 34.8 and 36.8 at 50 µg/mL respectively which was below 50%, while methanol extract exhibited activity that was decreasing as the concentration was increasing which suggests that the extract is potentiating alpha-amylase in breaking down the potato starch in to disaccharides rather than inhibiting its effect. 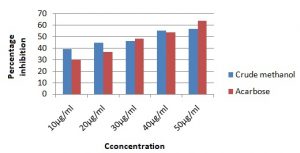 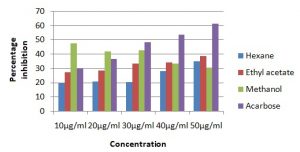 This study, however, shows that the crude methanol extract has a better alpha-amylase inhibitory activity than the other three extracts obtained successively and also suggest that the crude methanol extract activity was as a result of the synergistic effect of the secondary metabolites present in the extract.  The IC50 of the active crude methanol fraction and acarbose was extrapolated to be 24 and 28 µg/mL respectively in Fig. 3. From the in-vitro erythrocyte membrane stabilizing assay in Fig. 4, Crude methanol had a significant erythrocyte membrane lysing inhibition effect when compared to the standard diclofenac at the highest dose of 80 µg/mL and showed an extrapolated IC50 of 70µg/mL. n-Hexane and ethyl acetate extracts also showed significant dose-dependent inhibition of erythrocyte membrane lysis with n-hexane extract having a peak inhibition of 170% at 80 µg/mL. 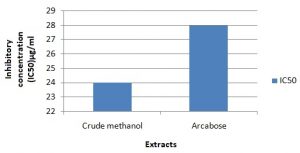 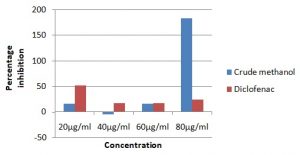 The peak was higher than diclofenac 52.2% at the same dose in Fig. 5. The IC50 of the two extracts were extrapolated to be 54 and 31 µg/mL respectively Fig. 6. On the contrary, methanol extract induces erythrocyte membrane lysis as the concentration increases. This, therefore, implies that the three extracts of the stem bark of the M. dusenii viz; n-hexane, ethyl acetate, and crude methanol have a significant anti-inflammatory effect by stabilizing the membrane. Control of inflammation in type 2 diabetes is quite necessary because as diabetes start to develop, the body becomes less sensitive to insulin and the resulting insulin resistance leads to inflammation. 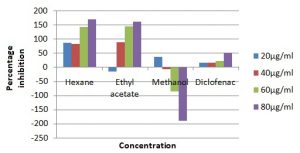 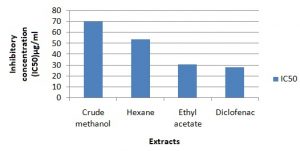 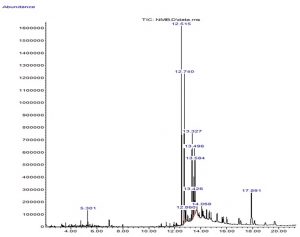 TABLE 1: IDENTIFIED COMPOUNDS FROM THE n-HEXANE EXTRACT BY GC-MS

The characterization of some of the compounds eluted from the gas chromatograph Fig. 7 base on their mass match, base peaks and fragmentation pattern with the ones in the NIST library yielded eight fully characterized known compounds as enumerated in Table 1 with their literature reported biological activities. The membrane stabilizing effect exhibited by the n-hexane extract could, therefore, be justified by the presence of hexadecanoic acid 13.

CONCLUSION: The study, therefore, showed that the N-hexane, ethyl acetate, and crude methanol extracts contained phytochemicals that have alpha-amylase inhibitory and anti-inflammation activity. Crude methanol extract being the most active in both activities. This study also justifies the use of the plant in the management of type 2 diabetes in folk medicine.

ACKNOWLEDGEMENT: The authors are grateful to Miss Patience Aghalibe for blood donation and Mr. Olatunde Isaac Awonyeni of Central Research Laboratory in the Federal University of Akure for GC-MS analysis.