ALTHOLACTONE: A NATURAL LEAD SCAFFOLD AS A POTENTIAL ANTICANCER AGENT

ALTHOLACTONE: A NATURAL LEAD SCAFFOLD AS A POTENTIAL ANTICANCER AGENT

ABSTRACT: Cancer is one of the most dreaded diseases across the globe. Drug resistance and adverse effects of various classical chemotherapeutic agents are the major challenges for cancer therapy. Cancer treatments with synthetic drugs are associated with severe side effects. Synthetic drugs address symptoms caused by diseases; on the other hand a plant-based medicine usually directs towards aiding body’s own healing process as it is in sync with nature. Natural products and their derivatives can be a promising alternative to existing cancer therapy. Several phytoconstituents have been identified as a valuable source of clinically important anticancer agents. Novel chemical entities and compounds of natural origin have been explored for efficient anticancer activity. Altholactone, a styryl lactone primarily found in Goniothalamus sp., exhibits cytotoxic and antitumor activities. Therefore, an attempt has been made to summarize altholactone analogues. Its structure-activity relationship (SAR) is suggested as a potent anticancer drug candidate, which may provide a structural framework to design and develop a novel anticancer drug in the future.

INTRODUCTION: Cancer is the second most leading cause of death globally and is responsible for 9.6 million deaths in 2018 worldwide 1. According to WHO, a cancer mortality rate of 79 per 100,000 deaths was reported in India, and this accounted for 6 percent of total deaths 2. Most anticancer agents lack selectivity against cancer cells, display a narrow therapeutic index and drug resistance. A search of a potent drug candidate for treatment and minimizing their toxic side effects in cancer treatment is the need of the hour 3.

Goniothalenol or altholactone (1) belongs to the styryl-lactone family; it comprises of an α,β-unsaturated δ-lactone (5-oxygenated- 5,6-dihydro-2H-pyran-2-one) and a disubstituted furanic motif with a cis configuration bicyclic ring system. IUPAC nomenclature of (+) altholactone nucleus is (2R,3R,3aS,7aS)-3-hydroxy-2-phenyl- 2, 3, 3a, 7a-tetrahydrofuro [3, 2-b] pyran-5-one Fig. 1. (+)-Altholactone is characterized by the presence of a cis-fused tetrahydrofurano-2 pyrone structure and its diastereomer, isoaltholactone (3), differs only in the configuration of the stereogenic centers at C-2 and C-3. Styryllactones are found primarily in Goniothalamus sp., and have various cytotoxic and antitumor activities 8. In the review, we have summarized the current knowledge including their isolation, synthesis and structure activity relationship (SAR) of altholactone and its derivatives as anticancer agent. 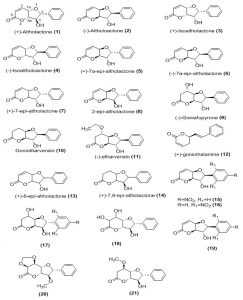 Sources of Altholactone: Loder and Nearn in the year 1977, identified altholactone from the bark of Polyalthia sp., 9. Later after eight years El-zayat et al isolated it from the bark of Goniothalamus giganteus (Annonaceae) 10. (+)-Altholactone (1) was characterized from G. arvensis Scheff., and G. borneensis collected in Malaysia 11-12. (+)-Isoaltholactone (3) was isolated from the stem bark of G. malayanus, stem bark and leaves of G.montanus and roots of G. tapics 13 Table 1.

1.1 Biosynthetic Pathway for Altholactone: The furano-pyrone skeleton represents the second most abundant class of styryllactone in Goniothalamus sp. These secondary metabolites are derivable from mixed biogenesis involving shikimic acid and acetate pathways 24. All styryl-lactones were isolated with the same basic C6-C3-C4 skeleton. (+)- goniothalamine (12) is considered as the pivotal precursor. Biosynthesis of stryllactone most probably involves a combination of the shikimic acid derivative cinnamate with two units of acetyl Co A. Subsequent biosynthetic process involves oxidation(s), epimerization(s), ring closure, and rearrangement of the framework, which leads to the full variety of stryllactone scaffolds 25.

1.2 Synthesis of Altholactone: The fascinating structure and the potent bioactivity of altholactone have attracted attention from synthetic chemists from all over the world to design and develop anticancer agents. Several synthetic methods have been employed and modified to get altholactone in high yield.

Anticancer Activity of Altholactone: Apoptosis is a programmed mode of cell death; it is a highly regulated process and serves to eliminate unwanted cells. It is characterized by specific morphological features like chromatin condensation and nuclear fragmentation. The apoptotic pathway is activated by extracellular as well as intracellular signals. Cytotoxic T cells are responsible for the generation of extracellular or death-inducing signals from the immune system in response to damaged or infected cells. Fas ligand (Fas-L), tumor necrosis factor (TNF) and TNF-related apoptosis ligands are extrinsic signaling pathways of apoptosis 55.

Intracellular signals (mitochondrial signals) include DNA damage, cytokine deprivation, and growth factor deprivation. The intracellular pathway is regulated by the B-cell lymphoma-2(Bcl 2) protein family. Various apoptotic signals results in the up-regulation of BH3, which then activates BAX (Bcl-2-associated X protein) and BAK (Bcl-2 homologous antagonist killer). With the onset of apoptosis signals, changes begin to occur within the cells, like activation of caspases (cysteine aspartyl-specific proteases), which is responsible for cleavage of cellular components. Caspases are a class of cysteine protein which are of two type’s initiator (caspase-2, 8, 9, 10) and executioner caspases (caspases -3, 6, 7) that are responsible for cleavage of target protein that eventually leads to cell death 56.

Altholactone treatment probably results in a reduction of cellular glutathione which may lead to rise of reactive oxygen species (ROS). This alters the redox status of the cells, leading to activation of signaling that will initiate the apoptotic cell death.

Altholactone isolated from Goniothalamus sp., (Annonaceae) hooks were evaluated against colorectal cancer cells (CRC) 65. It was observed that altholactone induced apoptosis in CRC cells but not in normal fibroblasts. On dissection of the altholactone-induced apoptotic signaling pathway, it was revealed that altholactone activated both caspase-dependent as well as independent apoptotic pathways. It was mediated by oxidative stress and generation of ROS. The caspase-dependent apop-totic pathway was initiated by activation of caspase 4. Activation of caspase-4 and altholactone-induced apoptosis was significantly inhibited by pre-treatment of CRC cells with the antioxidant N-acetylcysteine. Altholactone was found to be less toxic to normal fibroblasts compared to 5-fluorouracil (5-FU) but not doxorubicin. Altholactone treatment was also reported to increase levels of iNOS and heat shock protein HSP70 in brain tissue. Serum biochemistry analysis of altholactone revealed an increase in the levels of alanine aminotransferase (ALT) 64. Altholactone isolated from Goniothalamus macrophyllus was reported to induce apoptosis through Type II signaling pathway in cervical carcinoma HeLa cell. 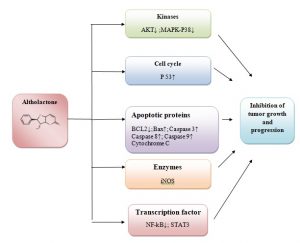 The presence of electron donating groups on the altholactone ring is observed to decrease cytotoxic activity. (+)- altholactone is most active in the furanopyrone series followed by (-)-altholactone and mono nitro derivative. Unsaturation at C6 and C7 position on the pyrone ring or chlorination at C7 position is most important structural requirement to increase the cytotoxicity 35. Acetylation at C-3 hydroxy group in athlolactone increases inhibitory action against mitochondrial respiratory chain, which may account for cytotoxic and antitumor activity of the compound 59.

CONCLUDING REMARKS AND FUTURE PERSPECTIVE: This review summarizes isolation, synthesis, and anticancer activities of altholactone and its derivatives. Studies have shown that an altholactone analogue induces apoptosis of several types of the cancer cell.  Based on SAR, it can be concluded that natural and synthesized altholactone derivatives could be regarded as lead molecules for the development of new cancer chemotherapeutic drugs. Thus, there is a wide scope for a synthetic chemist to synthesize substituted altholactone by alteration of the structure. Further investigations are required on substituted altholactone and its specific mechanisms to induce apoptosis in the cancer cell.

ACKNOWLEDGEMENT: Authors are grateful to Dr. S. C. Si Dean SPS for encouragements. Special thanks are due to the honorable President, Prof. M. R. Nayak of the University, for providing the necessary facilities.

CONFLICTS OF INTEREST: The authors report no conflicts of interest.