ABSTRACT: Alzheimer disease (AD) is the most common cause of dementia which affects more than 44 million individuals worldwide. It has been noticed that there is only symptomatic treatments are available to treat AD, but no cure exists. It is a neurodegenerative disease characterized by Alois Alzheimer’s in 1906, and neuro-degenerative diseases are one of the major concerns facing by the modern health care system. It is a multifarious complex disease which pathology not clearly understood but it is generally characterized by neuronal damage, memory dysfunction, etc. main pathological hallmark factor for Alzheimer disease is deposition of amyloid-β (Aβ) plaques around the neurons, neurofibrillary tangles, and a decrease in acetylcholine concentration and some other neurotransmitter dysregulation. Different types of risk factors like oxidative stress, obesity, diabetes, hypertension, air pollution, smoking, hyper cholesterolemia etc. have a very significant role in the development of AD and in the development of its preventive measures. Physical exercise and nutritional factors have been shown as protective measures for it and help in its prevention. For the diagnosis of it, we use cerebrospinal fluid biomarkers and positron emission tomography etc. Currently, there are two conventional pharmacotherapies exist for AD which is approved by Food and Drug Administration (FDA) are respectively- acetylcholinesterase inhibitors- tacrine, donepezil, rivastigmine, galantamine and N-methyl-D-aspartate glutamate antagonist (NMDA)-memantine.

It is identified as the most ubiquitous form of dementia among geriatric persons from the very beginning of twenty-first century 1. Alzheimer disease is the most common cause of dementia, worldwide it generally comprises around 60-80% of all dementia events 2, and is characterized by progressive loss of neurons, brain functions and cognition function 3. 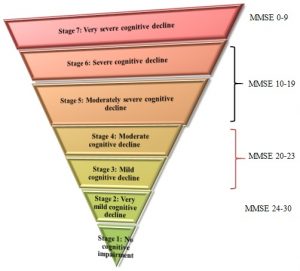 Pathology: Pathology of Alzheimer disease is not clearly understood yet because it is a polygenic and multifarious complex disease 6, 7.

Some important neuropathological hallmarks which characterized Alzheimer’s disease are as follows: 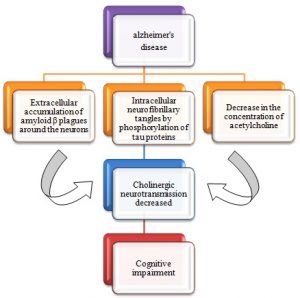 Alzheimer disease mainly characterized by progressive accumulation of amyloid-β (Aβ) proteins around the neurons which form plagues, the formation of neurofibrillary tangles (NFTs) by the hyperphosphorylation of tau proteins and a decrease in the level of ACh neurotransmitter 10. 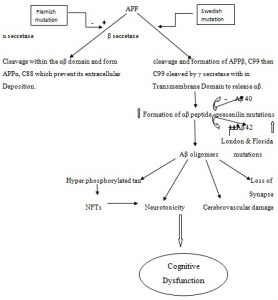 Acetylcholine is a neurotransmitter; which is synthesized from cholinergic neurons of the brain and helps in the signal transmission and delivery of messages in the brain 14, 15. It shows a very crucial part in learning and memory 16, 17. AD pathology relates to the deposition of plaques and neurofibrillary tangles (NFTs) in the brain which leads to degradation of the cholinergic neurons in the hippocampal and cortical part of the brain and decrease in the level of acetylcholine 18, 19, 20, 21, 22. Cholinergic dysfunction is responsible for unregulated signal transmission of the cholinergic pathway which is accompanied by AD 23. Dysfunction in cholinergic regulations originating from the basal forebrain and interact with pathological aspects of AD-like Aβ plague, NFTs, inflammation, oxidative stress to impair cognition 24. 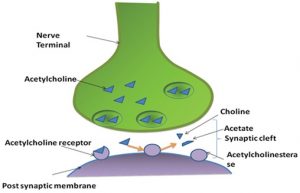 Degradation of the neuronal pathway also alter the function of some other serotonergic, dopaminergic, glutamatergic, and adrenergic neurons by which neurotransmitters like dopamine, serotonin, glutamine and noradrenaline dysregulation occur, and it’s also accompanied by AD progression 25. 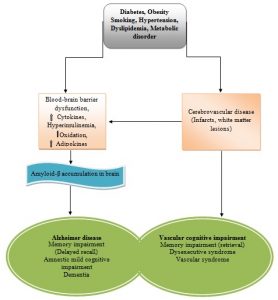 FIG. 5: VARIOUS RISK FACTORS FOR AD AND THEIR CONSEQUENCES 26, 27

Hypertension: It may elevate the risk of AD through reducing the blood-brain barrier (BBB) vascular integrity, which may result into the protein extravasation in brain tissues and leads to accumulation of Aβ 32, 33, 34. Hypertension is also referred to as a risk factor for different pathological conditions like myocardial infarctions, strokes, ischemic white matter lesions, atherosclerosis, and cardiovascular diseases, etc. these all are also connected to AD 35. According to a study increases midlife systolic blood pressure (≥ 160 mmHg) is connected with higher number of senile plaques and lesser weight of the brain in hippocampus and neocortex and increased in diastolic blood pressure (≥ 95 mmHg) is related to increase in the numbers of neurofibrillary tangles in hippocampus of the brain in late life 36.

Obesity: As per studies it is noticed that higher cholesterol and saturated fats enhance the risk of AD 37. Obesity is characterized by a chronic moderate systemic inflammation, which leads to a brain inflammatory process and initially characterized by increased cytokines secretion 38, 39. It is a pro-inflammatory factor, and cytokines which are primarily involved in it are tumor necrosis factor alpha (TNFα), interleukin-1beta (IL-1β), chemokine and interleukin-6 (IL-6) 40.

Oxidative Stress: In several studies, oxidative stress seems to be playing a damaging effect on the generation of AD 41, 42. Oxidative stress leads to the unlimited production of reactive oxygen species like superoxide, hydrogen peroxide, hydroxyl radicals, nitric oxide radical’s, etc. 43 It is related to oxidative damage of nucleic acids, protein, lipid, and carbohydrates by oxidation of these components 10, 44, 45. There are several sources which are involved in the production of reactive oxygen species (ROS) such as endogenous sources like mitochondria, cytochrome P 450, peroxisomes, etc. antioxidant defenses like vitamins (A,C and E), glutathione peroxidase, catalase, glutathione, and exogenous sources like UV, ionizing radiations, inflammatory cytokines etc. 46 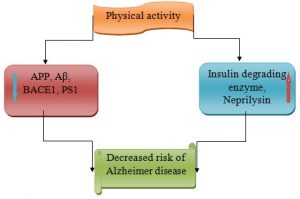 FIG. 6: PHYSICAL ACTIVITY AND THROUGH IT PREVENTION OF AD 47

Physical Exercise: Several pieces of evidence show that consistently aerobic exercise boost up cognitive performance 48, and considered as an effective preventive strategy for the treatment of different stages of AD 49. It is studied that physical activity works as an enhancement factor for neurotrophic factors like brain-derived neurotrophic factor (BNDF) amount, and their neuroprotective action gives a beneficial effect in AD by improving cognition 50. Routine exercise also works as a conditioner for oxidative stress and reactive oxygen species (ROS), through reducing ROS produced protein damage, it gives a protective effort in neurodegeneration and AD 51, 52. Physical exercise also decreases the level of tumor necrosis factor alpha (TNF-α), interleukin-1 alpha (IL-1α) which leads to decrease in the amyloid-β produced neuroinflammation of the brain and gives a protective effect in cognition or dementia 53. It also intensity the level of nitric oxide by the increase of endothelial nitric oxide synthase action in the brain, which leads to improve in the neuronal blood flow and brain damage 54.

Neprilysin (NEP) and insulin degrading enzymes (IDE) are cleavage enzymes which regulate and determine the amount of amyloid-β deposition and prevent the neurons from amyloid-β toxicity 55, 56, 57. Physical exercise induces IDE and NEP action by which Aβ accumulation doesn’t occur which is hypothesized the most important factor for Alzheimer’s pathology.

Nutritional Factor: Nutritional factor appears to play an important role as a protective factor for AD 58. It is reported that if we take a diet which is very rich in cholesterol, carbohydrates, and fats, results show a very detrimental role in AD 59. It is found that if we intake of dietary vitamin E but do not take extra vitamin E supplements, it is associated with decreased risk of AD 60. Insufficiency of folate, vitamin B6 and vitamin B12 outcomes into the increase in the homocysteine level and homo-cysteine increases concentration related to the AD as a neurotoxin 61.

Biomarkers for AD: The role of biomarkers in the screening of AD becomes very significant, from the point of view accuracy, sensitivity, and specificity of the diagnosis 62.

Cerebro Spinal Fluid (CSF) Biomarkers: Amyloid-β and tau proteins deposition are considered for AD pathology. In the CSF low amount of Aβ and a higher amount of total tau and phosphorylated tau (P-tau) proteins are supposed as a marker for AD diagnosis 63. Aβ indicated decreased clearance of amyloid-β from the brain to the CSF or blood 64, the high amount of P-tau exhibits neurofibrillary tangles generation in the brain, and total tau showed neuronal damage 65, 66.

Positron Emission Tomography (PET): It is used as a neuroimaging method in which various radiotracers are used for the visualization of cerebral activity and Aβ accumulation 67.

PET- Aβ imaging marker is used to estimate the accumulation of amyloid-β in fibrillary form 68, 69. 11C-PIB is used as an amyloid-β marker in PET technology; AD patient shows higher retention of 11C-PIB in the cortical regions which is spotted by amyloid-β depositions 70, 71, 72. 18F-FDG-PET is generally used for the checking of cerebral metabolism by using 18F-FDG as a marker. Reduced fluorodeoxyglucose uptake or decrease in glucose metabolism seems on PET in temporoparietal areas showed the AD occurrence and cerebral dysfunction 73, 74, 75.

Pharmacotherapy: Currently available conventional pharmacotherapy for AD which is approved by the Food and Drug Administration (FDA) are mainly of two types:

Acetylcholinesterase Inhibitors: According to cholinergic hypothesis cognitive dysfunction occurs in AD patients due to extensive loss of cholinergic neurons, enzymatic dysfunction for ACh synthesis and degradation which leads to an inability to neurologic impulses transmission across cholinergic synapses 76, 77. So for enhancing the cholinergic transmission, AChEIs has been proposed, which delay the degradation of ACh between synapses 78. They also act by reducing levels of the amyloid β protein precursor, amyloid β production and accumulation 79. Till date, four AChEIs are developed and approved by the FDA (Tacrine, donepezil, rivastigmine, and galantamine) for the treatment of different stages of AD. 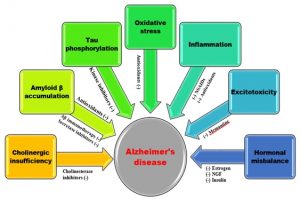 N-methyl -D- aspartate Glutamate Antagonist (NMDA Antagonist): NMDA receptors appear as a promising target for prevention of progressive neurodegeneration in AD 81. Because N-methyl-D-aspartate glutamate (NMDA) receptor overactivation allows excessive Ca2+ influx which causes excitotoxicity and leads to damage and loss of neurons 82. So in recent years, NMDA-antagonist is recognized as a new hope for the treatment of AD. Memantine is a first NMDA receptor blocker which is approved by the FDA for the treatment of moderate to severe AD 83.

CONCLUSION AND FUTURE ASPECTS:  Alzheimer’s disease is a progressive neurodegenerative disease which is spreading very quickly throughout the world. Due to its complex pathology, variable symptoms and unspecific diagnosis the present therapies like acetyl-cholinesterase inhibitors (tacrine, donepezil, rivastigmine, galantamine) and glutamate antagonist (memantine) give only symptomatic relief and modest efficacy, so there is no cure of it exist till yet. In the recent time, there is a rapid increment occurs in the knowledge about AD etiology and its underlying pathophysiological process so research in this field have the very vast scope and the cure for it does not appear so far.

Nowadays lots of studies were performed to find the cure for AD. In recent time there are various promising investigations are undergoing with some new possibilities like the drugs which target amyloid-β in different manners. Some current ongoing research approaches for AD are like α-secretase promotors, γ-secretase inhibitors, β-secretase inhibitors, immunotherapy (anti-amyloid antibodies), etc. So, in the upcoming years, with lots of significant advancements in the novel therapeutic agents will empower us to provide more comprehensive and distinctive pharmaco-therapy for Alzheimer’s disease.