ABSTRACT: The purpose of the current investigation was to ameliorate the aqueous solubility and dissolution rate of an anti diabetic drug Glimepiride by cyclodextrin ternary complexes employing aminoacids. Initially, Glimepiride (GMP) binary complexes with β-Cyclodextrin (βCD) and Hydroxy propyl β-Cyclodextrin (HPβCD) were formulated by physical mixing, kneading, solvent evaporation and spray drying techniques which was followed by ternary complex preparation of selected GMP-Cyclodextrin binary complex employing various aminoacids by kneading method. The kneading method was used in preparing ternary complexes of GMP, because it was proved to be the best method comparatively in yielding promising binary complexes of glimepiride in the initial stage of this study. GMP formed 1:1 M stoichiometric binary and ternary inclusion complexes as demonstrated by the AL-type of phase solubility curve. An increment in the stability constant value (Kc) of GMP- βCD/HPβCD complex in the presence of aminoacids conceded higher complexation competency. FTIR and DSC studies evidenced the perfect inclusion complex formation. Ternary complexes ameliorated drug dissolution compared with GMP and GMP-βCD. The ternary complex containg 1:3:2 molar ratio of GMP:HPβCD:L-ARGININE exhibited 98.85% drug dissolution in 2 hours, which was significantly high in relation to ternary complexes containg other aminoacids and it was found to follow imperatively first order release mechanism in relation to Hixson-Crowell’s cube root law. On aging studied complexes showed no significant change in physical appearance, drug content and drug dissolution attributes, which clearly shows high in-vitro stability of the complexes.

INTRODUCTION: Glimepiride (GMP) is the pioneer molecule among third generation oral blood glucose lowering sulfonylurea class and is used in the management of type 2 diabetes.

Cyclodextrins(CD’s) are hydrophobic, cyclic, non-reducing oligosaccharide, compounds of 6-8 glucopyranase units and have been extensively utilized to ameliorate the aqueous solubility of numerous poorly soluble drug molecules. CD’s have the ability to form inclusion complex with many drug molecules. In which the guest molecule is entrapped partially or completely within the cyclodextrin cavity thus resulting in an increase in the solubility of the drug. The inclusion complexes are shown to improve solubility and dissolution rate 6, 7 chemical stability 8, 9 and bioavailability 10, 11 of drugs. Cyclodextrin complexation could reduce local irritation and side effects associated with some drugs 12.

Through the formation of ternary complexes with drug/CD/excipients it is feasible to improve the complexation efficiency (CE) of CDs and at the same time enhance bioavailability of drugs from CD containing drug formulations. Numerous investigations reported that, incorporation of small quantity of hydrophilic excipients such as organic acids, amino acids, basic compounds, and polymers to an aqueous complexation medium usually give rise to an enhancement in the CE of cyclodextrins and ultimately reduce their amounts in pharmaceutical formulations 13. The purpose of the current study was to ameliorate the aqueous solubility, dissolution rate and thus bioavailability of glimepiride. This could be achieved by cyclodextrin ternary complexation of glimepiride employing aminoacids.

Materials: Glimepiride was obtained as agift sample from Dr Reddy’s lab, Hyderabad, βCD, HPβCD,  amino acids (L-lysine, L-isoleucine, L-valine and L-arginine ) and all other reagents used were of analytical grade and were  purchased from S.D Fine chem. Ltd Mumbai.

Binary complexes of GMP with βCD and also with HPβCD at 1:1, 1:2, and 1:3 molar ratios respectively were prepared by the following methods.

(b) Kneading method (KM): The weighed quantity of GMP and CDs were transferred to a clean glass mortar and kneaded together with 2ml of dimethyl formamide. The damp mass thus obtained was passed through 60-mesh screen and the granules obtained were dried at 45 0C under vacuum, until a constant weight was obtained. The granules after drying sufficiently were stored in a dessicator until used for further studies 14, 15.

(c) Solvent evaporation method (SM): The calculated amount of GMP and CD’s were dissolved in small volume of dimethyl formamide in a china dish and the solution was allowed to stand overnight. The solvent was removed at 60 0C under vacuum until binary complex was completely dried. The dried mass was crushed and screened through 120-mesh sieve and the powder obtained was stored in a dessicator until used in further studies 14, 15.

Phase solubility study: Solubility determinations of GMP were conducted as per the reported method 17. Surplus quantity of GMP (50 mg) was transferred to 20 ml aqueous CD’s solutions of increasing concentration (3mM to 15mM) in 50 ml Stoppard conical flasks. After shaking the contents of the flask at 37 °C for 72 hours on a mechanical shaker, the undissolved GMP was filtered through a 0.45mm filter paper (Whatman Grade 2589a) and the solutions after appropriate dilutions were assayed for GMP content at 228nm spectrophotometrically. Phase solubility studies of GMP  were  also conducted with  the incorporation of  aminoacids at a concentration of 0.5% w/v to the solutions containing CD’s. The blank trials were run simultaneously in the same concentrations of CD’s in distilled water in order to cancel out any absorbance if showed by Cyclodextrin molecules. The above solubility experiments were repeated for two more times to get accuracy in the results. The apparent stability constants (K1:1) were computed from phase solubility diagrams using the below equation:

Where So is the intrinsic solubility of pure glimepiride.

Drug content estimation: Each formulation equal to 100 mg of GMP was dissolved in 100ml of methanol in a volumetric flask separately. From these stock solutions 10μg/ml of GMP solutions were prepared using methanol and the contents were assayed for GMP by UV-visible spectroscopy at 228 nm using methanol as a blank.

Differential Scanning Calorimetry: The thermal analysis of GMP, Carriers and selected solid complexes of GMP were conducted with a Shimadzu DSC 60 (Japan). Accurately weighed samples were carefully placed in an aluminium pans and sealed. The sealed samples were heated at a rate of 100 °C /min in the temperature range of 30-300°C under a nitrogen flow rate of 20 ml/min.

In vitro dissolution study: In vitro dissolution studies for Glimepiride and its solid binary and ternary complexes was carried out using USPXXI Type-1 dissolution test apparatus by the powder dispersion method 18. Sample equal to 4 mg of GMP was used in each test. The   dissolution   tests   were   performed using 900 ml of distilled water (pH 7.0) at 37 ± 0.5°C with paddle rotation maintained at 50 rpm. The release of GMP from each sample was determined by withdrawing 5 ml samples at preset time intervals, and were filtered, appropriately diluted and analysed spectrophotometrically at 228nm. 5 ml of fresh medium was transferred to maintain sink conditions.

Stability Study: Stability Study for selected binary and ternary complexes of GMP was carried out by storing 1gm of each selected complex in an ambered coloured screw capped glass bottles at accelerated and controlled temperatures and relative humidities for a period of 3 months as per the reported method 19. The complexes were evaluated for physical appearance, drug content and in-vitro dissolution at the end of three months.

Phase solubility study: Phase solubility studies for GMP and its complexes were carried out to get an information about the drug solubilization mechanism and the inclusion complex formation. Solubility graphs (Fig. 1) for solid inclusion complexes were AL type as per the Higuchi and Connors classification, demonstrating a linear increase of drug solubility indicative of the formation of soluble complexes. The ratio between the slopes of the phase solubility curves of the ternary and binary complexes, assumed as an index of the relative solubilizing efficacy, it was 1.33 for GMP-HPβCD-ARG ternary complex asserting the higher effectiveness of the ternary complex in relation to binary complexes. 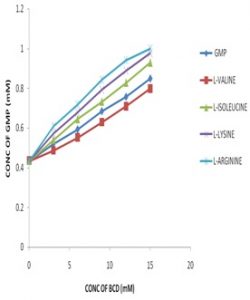 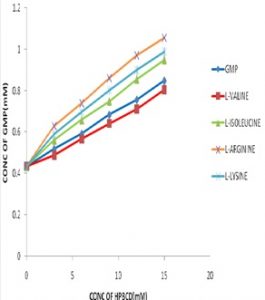 In both the spectra the peak for NH groups are appeared as broad bands. Similarly, the position of peaks for C-H stretching involving asymmetric and symmetric stretching for CH3 and CH2 groups are totally changed. The overall observation of the spectra for binary and ternary complex revealed that there is a change in the position of peaks for functional groups as well as different types of bonds. This type of changes in the nature and position of the peaks is possible only when inclusion complexes are formed (Fig. 2). 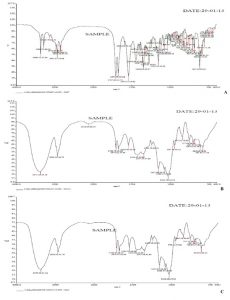 Differential Scanning Calorimetry (DSC): The thermal behaviour of the GMP and its complexes can be studied based on the type of the thermograms and nature of the peaks. The thermogram of pure GMP showed endothermic peaks at 200 0C. This corresponds to a melting point of the pure drug. This is almost in agreement with reported literature values of melting point 207 0C to 210 0C. In the thermogram of binary and ternary complexes, the nature of peaks are totally changed, the peaks corresponding to pure drug 210 0C is shifted to 295 0C and 275 0C for binary and ternary complexes respectively (Fig. 3). The changes in the nature of thermograms of complexes indicate that inclusion complexes are formed. Hence it can be concluded from DSC studies that there is an interaction of drug with carrier and formation of complex like inclusion complexes. 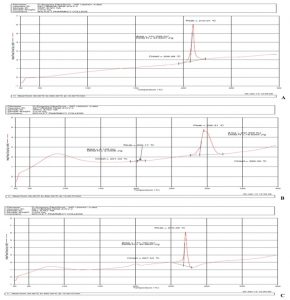 The highest improvement in in-vitro dissolution performance was observed in GHK3 formulation containing 1:3 molar ratio of GMP:HPβCD (96.16% drug release in 120 minutes with DE60 value 58.88% and T50 value 26.88%). These results were in accordance with the phase solubility results. 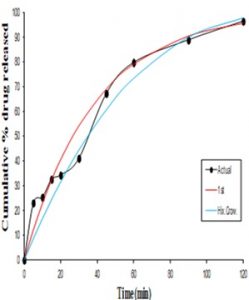 Dissolution profiles of pure GMP, and all its binary and ternary complexes were assessed in relation to Hixson-Crowell’s cube root law and first order kinetics.

The correlation coefficient (r) values of the first order kinetics were found to be slightly higher to the ‘r’ values of Hixson-Crowell’s cube root model.  Hence the release pattern in GMP and all its solid binary and ternary complexes were found to follow imperatively first order kinetics in relation to Hixson-Crowell’s cube root law. 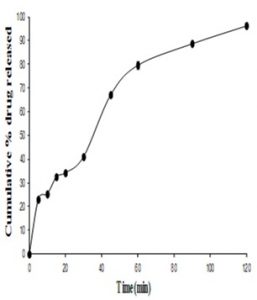 Stability Study: There was no significant change in the physical appearance, drug content and percent drug dissolution in the GMP complexes. Stability results clearly indicates that the complexes were sufficiently stable under accelerated and controlled conditions.

CONCLUSION: From the present study it is concluded that the formulated complexes revealed the key performance of HPβCD to ameliorate the solubility and dissolution rate of Glimepiride. Further, ternary complexes of GMP: HPβCD: L-ARG (1:3:2 molar ratio) prepared by Kneading method offers an improvement in the solid pharmaceutical formulations of the Glimiperide, which renders sufficiently the formulation aqueous soluble for clinical application. However further pharmacokinetic and pharmacodynamic evaluation of our promising GA2 formulation would yield much rewarding outcomes.

ACKNOWLEDGMENT: We would like to thank N.E.T. College of Pharmacy. Raichur. Karnataka. India, for providing laboratory facilities to carry out this research work. We also extend our sincere thanks to the University of Dammam. Dammam. Saudi Arabia, for providing eLibrary (free acess of national and international eJournals) facility to do literature survey for this research work.