ABSTRACT: The aim of the present study is to evaluate the ameliorative effect of curcumin against profenofos induced oxidative damage of renal tissue in mice. Animals were divided into four different groups namely Group-I (control mice; NC), Group-II (NC gavaged 100µl ethanol for 30 days; EC), Group-III (NC gavaged 25mg/kg b.w profenofos for alternate 30 days; PC) and Group-IV (PC treated with 120mg/kg b.w of curcumin daily till next 30 days; CurTPE). Electron micrographs of kidney and level of lipid peroxidase (LPO) were estimated to investigate the therapeutic potential against profenofos treated subjects. Histological analyses of PC showed hemorrhages of blood capillary, edema, necrosis and glomeruli shrinkage but CurTPE showed significant improvement, as compared to PC. Electron microscopic studies also revealed partly destruction of nucleus, mitochondrial membrane, cristae and formation of large vacuoles in cytoplasm but CurTPE showed recovery when compared to PC. It was observed that the damaging effects of profenofos on nucleus, mitochondrial membrane and cristae of renal tissues. It might be due to decrease in lipid concentration and increased LPO concentration. Free radicals were generated exponentially due to increased concentration of LPO and reactive oxygen species (ROS) production which in turn adversely affected on several biomolecules and interfered with different metabolic pathways.

INTRODUCTION: India is gifted with heterogeneous landforms, variety of climatic conditions and wide range of physio-geographic features which ensures availability of most kind of fruits, vegetables and spices. India is the major producer of fruits, vegetables and spices worldwide. 1 Such fast growth has been accompanied due to heavy use of pesticide.

Profenofos (O-4-bromo-2-chlorophenyl O-ethyl S-propyl phosphorothioate) is one of the most commonly used organophosphate insecticides which have been widely used in agriculture for crop protection from pests. It is non-biodegradable and known for its residual effect on food and drinking water. Adverse effects on environment and human health have already been reported. Residual quantity of profenofos is also reported in agricultural crops that are hazardous for public health and wildlife. 2

Curcumin, a secondary metabolite product of Curcuma longa commonly known as turmeric has phenolic aromatic ring compound (Fig. 1). It is used as active ingredient of traditional herbal medicine for various diseases. It exhibited antioxidant, anti-carcinogenic, anti-inflammatory and antitumor properties. Hepatocellular injuries and tubular degeneration of kidney, decreased RBC count and hemoglobin % under the exposure to profenofos were also observed. Generation of free radicals and reactive oxygen stress (ROS) are considered to be diagnostic index in profenofos poisoning. Curcumin have also been reported for scavenging potential to free radicals and ROS. 3 Keeping in view of earlier researches, the present investigation has been carried out to study the profenofos induced nephrotoxicity in Swiss albino mice and amelioration with curcumin.

Swiss albino mice Mus musculus weighing 22-27 g were maintained at the animal house of PG Department of Zoology, Bhagalpur University, Bhagalpur (Bihar). Food and water were provided ad libitum to mice. The research proposal (Reg. No. 5805/10) was approved by the Research Committee of the Department and all experimental procedures were performed in accordance with the guidelines of Institutional Animal Care Committee and the principles outlined in the Declaration of Helsinki.

Profenofos (O-4-bromo-2-chlorophenyl O-ethyl S-propyl phosphorothioate) was purchased from PI Industries Ltd. All other chemicals and biochemical reagents were of analytical grade.

Profenofos: 50 mg/ml stock solution of profenofos was prepared by dissolving in distilled water.

Anesthesia: Animals were anesthetized by injecting intraperitoneal with a mixture of ketamine (83 mg/g) and xylazine (13 mg/g).

Histopathology: Renal cellular toxicity was confirmed through histopathological studies in mice. Renal tissues were collected from sacrificed mice and washed with normal saline then cut. Tissues were processed in 10% formalin for at least 2 days then washed overnight under running tap water for further processes. Tissues were then dehydrated by dipping in ascending concentration (50-100%) of ethanol and xylene for 15 minutes in each grade. The tissues were then cleaned in a mixture of absolute alcohol and xylene (1:1) and then in pure xylene for one hour. Thereafter, passing through a mixture of xylene and molten wax (1:1) for one hour, it was embedded in molten paraffin wax in L moulds blocks. Embedded tissue was sectioned at 5 µm thickness and mounted on slide.

Sectioned tissue was stained with aqueous hematoxylin and alcoholic eosin (H&E) for ten minutes with one dip in acid water (if over stained). The sections were washed under running tap water at least for one hour and then rinsed in distilled water. Sections were dehydrated in ascending series of alcohol up to 70% alcohol and counter stained with eosin, dehydrated further in 90% of absolute alcohol. Slide was dipped in xylene and mounted with DPX. Observation was made under microscope for analysis of histopathological changes.

Electron microscopy: Ultra-microscopic analyses of renal tissues of different groups of mice were done by fixing in 1% paraformaldehyde and 1.5% gluteraldehyde in 0.2M Phosphate buffer saline; pH of 7.2-7.4 at 40C for 24 hrs which was further dehydrated in graded acetone. Dehydrated samples were cleared with epoxy propane and blocks were cut into thick sections (1µm) and required portion were selected. Specific portions were finally trimmed and the serial section of 60-90 nm thickness were cut and stained with uranyl acetate followed by lead citrate. Semi thin sections were stained with toluidine blue. All sections were examined and photographed under electron microscope model installed CM-10 Philips at All India Institute of Medical Sciences, New Delhi.

Colorimetric determination of MDA level was done according to Satoh, 1978. In this reaction thiobarbituric acid (TBA) reacts with Malondialdehyde (MDA) in acidic medium at a temperature of 950C for 30 min with frequent shaking to form thiobarbituric acid reactive substance (TBARs). The absorbance of the resultant pink product was measured at 534 nm. 4

Serum protein and total lipid were determined by using a semi auto analyser (Lab life, Chem master) according to the manufacturers’ instructions. Standard controls were run before each determination and the values of different biochemical parameters were obtained. Different test groups of mice blood serum were analysed for different test parameters and mean values of each group were obtained. 5

The statistical analysis of the data was done using SPSS. Data expressed as mean ± standard error of mean (SEM). Comparisons between two groups with normality and homogeneity of variances were performed by two-tailed unpaired Student’s t-test. One-way analysis of variance (ANOVA) was used, followed by the post-hoc Tukey multiple comparison test to analyze data for treated mice. The levels of significance were set at P < 0.05.

Electron microscopic study: The adverse impact of profenofos on vital organs of animals and the reparative properties of curcumin were confirmed by electron microscopic study. Normal histoarchitecture of nucleus and mitochondria of kidney were seen in NC but in EC, slightly degradation of nucleolus of nucleus and vacuole formation in cytoplasm were observed whereas damaging of cristae, mitochondrial membrane and vacuoles in cytoplasm were observed. Further complete destruction of nucleus as well as nuclear membrane destruction of mitochondrial membrane, cristae and larger size of vacuoles in cytoplasm was observed in PC, which was well supported by other workers. 10-11 In CurTPE remarkable recovery was observed in the renal cell organelle like nuclear membrane, nucleolus, mitochondrial membrane and cristae. Vacuoles size was found to be enlarged in the cytoplasm in comparison to normal control group mice (Fig. 3-4). Damaging effect of profenofos on nucleolus, mitochondrial membrane, cristae and vacuole formation might be due to generation of free radicals exponentially and thereby decreasing the concentration of protein, lipid and increasing the level of LPO concentration. Report suggested that concentration of ROS production adversely affect on several biomolecules and interferes with different metabolic pathway. 12 Curcumin helps in reducing the free radicals and decreasing adversely effects on bio-molecules. 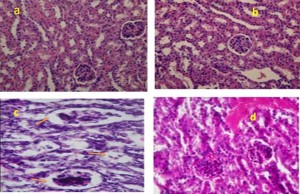 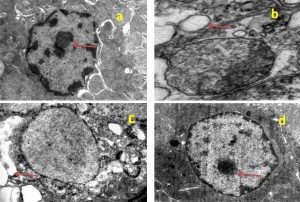 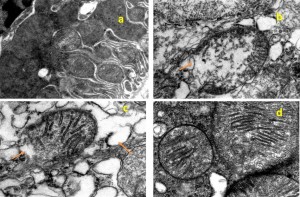 Lipid: PC had 48±3mg/dl which was decreased when compared to normal range and CurTPE test group had 75±4 mg/dl of lipid (Fig. 5b).  The NC and EC had lipid concentration within the normal range but EC showed slightly elevated concentration as compared with normal control group. This suggested that alcohol accelerates lipid conversion from carbohydrate which further caused liver damage. PC showed decreased concentration of lipid in the blood serum. This might be due to the damaging effect of profenofos on liver tissues. In CurTPE, total lipid concentration was in the normal range which may be due to anabolic nature of curcumin. Curcumin synthesized the lipid damaged by profenofos which might be increased the lipid production in CurTPE as ethanol promotes lipid accumulation. Similar experiment on animal subjects was carried out and different biological parameters were found to be altered. 15-17

Lipid Peroxidase (LPO): Lipid peroxidase was measured to know the reparative mechanism of curcumin. The activity of LPO was found to be 2.25±0.04 nmol/ml in PC whereas the activity of LPO was ranged from 1.36±0.02 nmol/ml to 1.15±0.01nmol/ml in CurTPE. The NC and EC group showed LPO concentration within the normal range which suggests the permissible level of ROS formation which is in accordance with normal oxidation of lipids for normal metabolic processes. In PC group exhibited almost double the concentration of LPO than the NC group so increased concentration of ROS production adversely affected the several biomolecules and interfered with different metabolic pathways. In CurTPE test group showed remarkable recovery in the LPO concentration with respect PC group. Observation reveals that curcumin decreased the LPO concentration and production of ROS. LPO acts as a scavenger of oxygen free radicals and reduces the production of ROS in vivo such activities maintain the antioxidant related enzymes like superoxide dismutase, catalase and glutathione peroxidase. The pro-oxidant activity supposed to mediate through generation of phenoxyl radical of curcumin by peroxidase-H2O2 system, which co-oxidizes the cellular glutathione or NADH, accompanied by O2 uptake to form ROS. 18-22

Curcumin showed reparative property, which was confirmed by decrease in size of vacuole in cytoplasm, reappearance of nucleus, nucleolus nuclear membrane along with the reorganization of mitochondria cristae and mitochondrial membrane which suggests adverse effect on biomolecules due to increase in the concentration of LPO, it reduces the free radicals. Curcumin reduced the activity of LPO, which was correlated with decreased activity of ROS species and free radicals. Thus it can be concluded that curcumin may be given orally with some other renal protectant to prevent kidney damage in mammalian system due to oxidative stress.