Acute inflammation, an immediate and early defensive response in the host to all forms of injuries, helps to heal wounds and promotes tissue regeneration. However, when this inflammation process is not controlled properly by competent negative feedback, a chronic low-grade inflammatory state could result 1.

Previous research has shown that nutrients as natural bioactive compounds in fruits, vegetables, grains, legumes and tea, influence inflammation 3, 4. Homocysteine (Hcy) is a metabolite of the essential amino acid methionine 5.   Elevation of circulating homocysteine is associated with inflammation 6. As a risk factor, the risk of Hhcy is not limited to heart disease but can be to include other inflammatory diseases such as cardiovascular disease, Alzheimer's dementia, pregnancy complications neural tube defects and osteoporotic     fracture 7. It has been reported that in patients with inflammatory bowel disease (IBD) the Hcy levels in plasma and colonic mucosa are increased 8, 9, 10. It should be noted that Hhcy not only is produced from inflammation, but the oxidative stress generated from Hhcy will again promote inflammation 4.

Humans have always considered snails as a source of numerous therapeutic properties 11. The Helix aspersa is a species of land snail, its meat is characterized by a high dietetic value and excellent nutritious traits. Research shows that it is rich in protein at the same time being low in lipids 12.

Snail extracts have been increasingly used in numerous therapeutic conditions and recent literature attributes healing, soothing and anti-aging properties to them 13. Snails have been used with success against most inflammations, and especially against bronchitis, asthma, influenza, lung diseases such as pneumonia and pulmonary phthisis, and inflammatory skin diseases 11 but no reports have been yet published about the effects of snail extract on colitis, also no research was done on the pro-inflammatory effects of Hhcy on colon histological integrity. In this context, the aim of the present study is to evaluate the ameliorative effect of Helix aspersa crude extract on colonic morphological and histological changes resulting from Hhcy induced by height dietary methionine supplementation in albino rats.

Preparation of crude extract: Ninety snails (Helix aspersa) were bought from commercial farmer from the region of Mila, East Algeria. Animals were kept in plastic cages and were fed with fresh leaves of lettuce and carrots for two weeks under laboratory conditions (25 – 26 °C). This time was allowed to ensure temperature acclimation. At the end of the second week adjustment period, the shell was removed using hooks and the pedal mass was separated from visceral mass. The head was removed then specimens were weighted. The tissue is then homogenized on ice using a T25 Ultra-Turrax homogenator. The dose of 8g/kg/day of Helix aspersa crude extract was considered after toxicity study on mice (data not shown but available).

Animals: Eight weeks old male albino Wistar rats (n= 24) weighing 200 to 250g used were received from Pasteur Institute, Algiers, Algeria. Animals were housed in plastic cages in a light and temperature controlled room on a 12 to 12 h light–dark cycle, in which the temperature (25 °C) and relative humidity (65 to 70%) were kept constant. body weight was monitored daily.

The experimental groups were fed the same diet as the control and access to water was allowed ad libitum. The standard diet is composed of 30mg proteins and 4.5mg methionine per 200g of diet. The animal studies were conducted after obtaining clearance from Institutional Animal Ethics Committee.

Assessment of Colonic Damage: All the animals were sacrificed at the end of experimentation by ether overdose. Abdomen was opened and colons were exposed. Distal 8 cm of colon was excised and opened by a longitudinal incision. After washing the mucosa with saline solution, colons were imaged and weighted. Weight of distal colon is used as a marker for inflammation and tissue edema. Then mucosal injury was assessed macroscopically using the scale of Morris et al 18.       (Table 1)

A small cross section of colon was fixed in 10% formaldehyde and embedded in paraffin, and 5µm sections were prepared. Tissues were stained with hematoxylin and eosin and observed under light microscope Optech Optical Tecnology®. All reagents were purchased from Sigma Aldrich, Algeria. Colonic tissues were scored for histological damage using the criteria of Ackerman et al 19 (depth of necrosis, extend of necrosis, degree of inflammation, extent of inflammation and fibrosis).

The scores for each category examined were calculated for each specimen in the different groups then added to obtain the total score, which was then divided by the number of rat colons examined in each group to obtain the average histologic score for the group.

Statistical analyses: The data were expressed as Means ± SEM. Data analyses and presentation of graphs were performed using Pearson’s correlation and one way analysis of variance (ANOVA) with the statistical package for social science (SPSS) version 20 for windows followed by Newman-keuls post hoc test. P values <0.05 were considered as significant.

Body weight: Treated groups showed significant (p˂0.001) weight loss during all days of the experiment compared to control rats. However Helix aspersa crude extract seems to prevent reduction of body weight compared to experimental control (p=0.0014). For the control group there was a gain of weight. (Fig. 1) 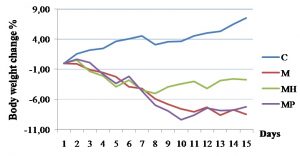 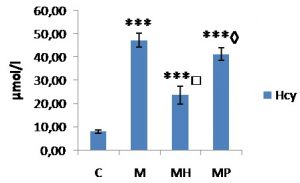 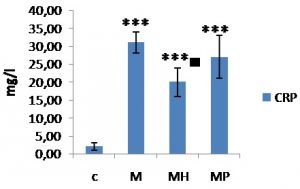 FIG. 3: EFFECTS OF L-METHIONINE SUPPLEMENTATION AND HELIX ASPERSA CRUDE EXTRACT ON CRP LEVELS IN RATS. Data are expressed as means± SEM (n= 6). ***P˂ 0.001 when compared to control; ■p ˂ 0.01 when compared M. Recent studies supported the fact that elevation of circulating homocysteine is associated with inflammation. Level of circulating homocysteine can be effectively reduced by the administration of anti-inflammatory medications 21. Current data have suggested the possible pathogenetic implications for Hhcy in inflammatory bowel disease (IBD) suggesting that Hcy may act as a pro-inflammatory and immuno-stimulating molecule 6.

C-reactive protein is released by the body in response to acute injury, infection, or other inflammatory stimuli. It is a pro-inflammatory factor that has been implicated in the pathogenesis of autoimmune diseases as IBD 22. 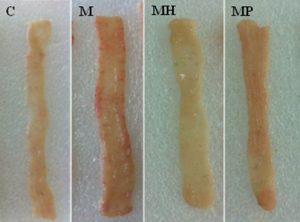 As standard drug, prednisolone activity against colonic inflammation was not better than that of Helix aspersa crude extract with regard to all parameters (p˂0.05). We observed significant increase (p˂0.001) in DAI for M group compared to C group. Helix aspersa crude extract and prednisolone induced decrease of DAI compared to experimental control (p˂0.001). (Table 2) 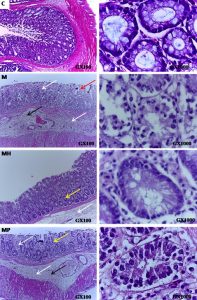 FIG. 5: PHOTOMICROGRAPHS OF COLON SECTIONS OF RATS STAINED WITH H&E

It has also been reported that the oxidative stress derived from hyperhomocysteinemia will again induce acute and chronic inflammation via the regulation of NF-κB transcription      factor 6. Ding et al speculated that Hcy-mediated pro-inflammatory responses and elevation of expression of MMPs might be involved in the pathogenesis action of Hhcy in IBD. 24 Homocysteine was also found to stimulate IL-1beta production by human peripheral blood monocytes and TNF-alpha production by monocyte 26, 27. TNFα and IL-1 proinflammatory cytokines have important roles in the pathogenesis of chronic inflammatory diseases such inflammatory bowel disease (IBD) 28.

Immune cells found in mucosa and submucosa are eosinophils, mast cells  and lymphocytes (Fig. 6). Lampinen et al demonstrated that the inflammatory process in IBD involves many inflammatory cells, such as lymphocytes, macrophages, mast cells, neutrophils, and eosinophils. They indicated that eosinophils are proinflammatory agents thus producing effects such as inflammation, tissue destruction, formation of fibrosis 29, 30. 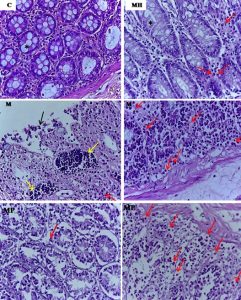 Our results showed colonic wall recovery after treatment of hyperhomocyseinemic rats with crude extract of Helix aspersa compared to experimental control. Healing properties of snails are due to the highly nutritious value of mollusc meat owing to its content of essential amino acids, high proteins quality, low fat, rich vitamins and minerals 31.   More than the nutritious value, Citil el al, reported that Helix aspersa contains high levels of polyunsaturated fatty acids of the omega 6 series and especially omega 3 series (eicosapentaenoic acid, linolenic acid, … ) 32. These essential  biochemicals are important components of the cell membrane and they give many other compounds involved in the regulation of blood pressure and inflammatory responses. More and more evidence suggests that omega -3 fatty acids exert an anti -inflammatory effect 33. Recent study found that Helix aspersa contains antioxidant superoxide dismutase (SOD) and Glutathione-S-Transferase (GST) activities which protect cells from the damage caused by reactive oxygen species and reported that the snail slime induced cellular regeneration by stimulating fibroblast proliferation, extracellular matrix assembly and the regulation of metalloproteinase activities 34.

CONCLUSION: The results of this study have shown that crude extract of Helix aspersa has got a good potential to reduce severity of colon inflammation  induced by homocysteine in rats, as indicated by macroscopic, microscopic and biochemical evaluations.

ACKNOWLEDGMENTS: Authors are grateful to Ministry of higher education and scientific research for his financial help.