Solubility is one of the important parameter to achieve desired concentration of drug in systemic circulation for pharmacological response to be shown. Poorly water soluble drugs often require high doses in order to reach therapeutic plasma concentrations after oral administration. Any drug to be absorbed must be present in the form of an aqueous solution at the site of absorption. Most of the drugs are weakly acidic and weakly basic with poor aqueous solubility. Hence various techniques are used for the improvement of the solubility of poorly water-soluble drugs include micronization, chemical modification, pH adjustment, solid dispersion, complexation, co‐solvency, micellar solubilization, hydrotropy etc. The purpose of this work was to describe the enhance solubility of rifampicin by using solid dispersion technique and Physical mixture with PEG6000. Here drug and carrier ratio 1:1, 1:2, 1:3 and 1:10 respectively. The prepared samples were evaluated by SEM, Drug content, In-vitro studies, Wettability and Solubility, IR studies, Angle of repose. In-vitro drug release showed fast and complete release over a period of 2hrs in pH7.4 release profile of solid dispersion (SD 10) were compared with pure drug and physical mixture. It was confirmed that no interaction between drug and polymers in the formulated solid dispersions by IR Spectra.

INTRODUCTION:Therapeutic effectiveness of a drug depends upon the bioavailability and ultimately upon the solubility of drug molecules. Currently, only 8% of new drug candidates have both high solubility and permeability 1.

STEP 1: HOLES OPENS IN THE SOLVENT

STEP 2: MOLECULES OF THE SOLID BREAKS AWAY FROM THE BULK

STEP 3:THE FREED SOLID MOLECULE IS INTERGRATED INTO THE HOLE IN THE SOLVENT

The term “solid dispersions” refers to the dispersion of one or more active ingredients in an inert carrier in a solid state, frequently prepared by the melting (fusion) method, solvent method, or fusion solvent-method 7. The most commonly used hydrophilic carriers for solid dispersions include polyvinylpyrrolidone 8, 9, polyethylene glycol 10, Plasdone-S630 11. Many times surfactants may also used in the formation of solid dispersion. Surfactants like Tween-80, Docusate sodium, Myrj-52, Pluronic-F68 and Sodium Lauryl Sulphate used 11.

In present work aims to enhance the solubility of the rifampicin by using Solid dispersion method and Physical mixture with PEG6000.

Preparation of Solid Dispersions: Soliddispersionscontainingrifampicin were preparedby using PEG as coat material employing common solvent method. Four batches with drug to carrier (PEG6000) ratios namely 1:1,1:2,1:3 and 1:10 were prepared for the preparation of solid dispersions. The respective amount of carrier was dissolved in 50ml methanol taken in conical flask to get a clear complete soluble polymer solution. The weighed amount of rifampicin was added to this solution with constant stirring until the drug is completely incorporated in solvent. The solvent was removed by evaporation at room temperature. The mass obtained were further dried in desiccator for overnight, crushed and pulverized. Details are tabulated in the Table 1.

Preparation of Physical mixture: Drug carrier ratio of 1:10 was used to prepare physical mixture. The drug and carrier were mixed thoroughly in a mortor. This was done by geometric dilution technique to ensure homogenous distribution. Details are tabulated in the Table 1.

Sem Analysis 12: The particle size, shape and surface morphology of solid dispersions were examined by scanning electron microscopy. (LEO, 435VP, UK) prior to examination, samples were mounted on an aluminium stub using a double sided adhesive tape and then making it  electrically conductive by coating with a thin layer of gold (approximately 20nm) in vacuum. The scanning electron microscope was operated an acceleration voltage of 15KV (Figures 1, 2)

Estimation of Drug Content in Solid Dispersion: 50mg solid dispersions or physical mixture were weighed accurately and transferred into a 50ml volumetric flask. The volume was made up to the mark with methanol and kept for 2hrs with occasional shaking and filtered. Then the drug content was analyzed Spectrophotometrically at 475nm using a single beam visible U.V.Spectrophotometer.

In-Vitro Dissolution Studies: The release of rifampicin from solid dispersion was investigated in phosphate buffer of pH 7.4 as a dissolution medium (900ml) using the paddle method specified in USP X XIV (model TD T6P-Electrolab). Sample of 100mg solid dispersions were taken in the basket. A speed of 75 rpm and temperature 37±0.5°C was maintained throughout experiment. At fixed intervals, aliquots (5ml) were withdrawn and replaced with fresh dissolution media. The concentration of drug release at different time intervals was then determined by measuring the Absorbance using visible spectrophotometer at 475nm against blank. The studies were carried out in triplicate.

FTIR Studies 13: FTIR Spectroscopy was performed on each at samples to determine the structure of the organic compounds and to identify the presence of specific functional groups within a sample. Furthermore drug polymer interactions were examine using the resulting spectra. The infrared spectra were obtained using a scale of wave numbers (cm-1). The analysis were performed by using a thermo nicolet nexus 470 FTIR ESP. 3-5 mg of sample was added to approximately 100mg of KBr. The mixture was then ground to a fine powder using a mortar and pestle and transparent discs formed using a pellet press. The discs were placed in FTIR spectroscopy apparatus and spectra were collected. The range of the collected spectra was 4000-400cm-1 (Figures 3, 4, 5, 6).

Wettability Studies 14: Pure drug approximately 1gm was placed in sintered glass funnel with the heap of cotton plug. The funnel was held in upright position in a beaker filled with the water level in the beaker just touched the cotton plug. The time required to raise the water through the drug for the colorings of water was recorded. Same procedure was followed for all solid dispersions.

Solubility Studies 15: Pure drug (20mg), its physical mixture and solid dispersion with PEG 6000 under test was placed in a test tube containing 1ml distilled water. The samples were shaken at room temperature until saturated solution formed and the aliquots were filtered. The filtered samples were diluted suitably and assayed Spectrophotometrically at 475mm.

Angle of Repose 16: To get an idea about flow ability properties of the solid dispersion, angle of repose for all the batches was determined, suitable for solid dosage form preparation.

RESULT AND DISCUSSION: The objective of the study was to develop and evaluate PEG solid dispersions of rifampicin. Four core:coat ratios namely 1:1, 1:2, 1:3 and 1:10 were used to prepare PEG solid dispersions by common solvent method (Table 1).  As per figures 1 and 2 reveals that the surface morphology of rifampicin and its binary systems was examined by SEM analysis. The rifampicin crystals appeared as fine needles with smooth surfaces, irregular shape and partially agglomerated in bundles. In solid dispersions, rifampicin particles were in almost amorphous form, which indicated a reduction in particle size. Paricle size is directly proportional to surface area and this effect was the drug release from solid dispersions.

Figures 3, 4, 5, 6 shows compatibility studies of rifampicin and the carriers were carried out by using FTIR spectrophotometer. In IR spectrum, shown differences between 3000-600cm-1 region and it indicates that no interaction between drug and polymers. Table 2 shows the time required for rising water through capillary action to wet the drug was found to be range of 9-12 min. For all the solid dispersions which was significantly less when compared with 35 mins for pure drug and 32 mins for physical mixture.

The wetting time of SD1, SD2, SD3 and SD10 was found to be 21, 12, 10 and 9 mins respectively. Solubility of rifampicin in solid dispersions was more than the pure drug and physical mixture. Solubility of pure drug was found to be 2mg/ml where as for physical mixture was 50mg/ml. Solubility of rifampicin in SD1, SD2, SD3, SD10 was found to be 15, 25, 50, 225mg/ml. As the ratio of core:coat ratio increases, solubility also increase, this may be due to more soluble polymer nature of polymer and more size reduction and presence of amorphous nature of drug in solid dispersions. The drug content estimated in each 50mg of various solid dispersions [1:1,1:2,1:3 and 1:10] were found in the range of 4.3-26.82mg in methanol. Table 3 and figures 7, 8 shows In-vitro release studies were performed in pH 7.4 for 2 hrs. 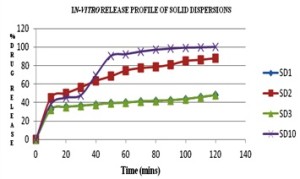 As the solid dispersions showed free flow property, so were considered suitable for tablet dosage form. In-vitro drug release showed fast and complete release over a period of 2 hrs in pH 7.4 release profile of solid dispersions(SD10) were compared with pure drug and physical mixture. Solid dispersions SD10 with core: coat ratio 1:10 was found better with respect to release profile, hence these are promising carriers for oral fast release of rifampicin. Studies have shown promising results these exits a scope for further in-vivo evaluation.

ACKNOWLEDGEMENTS: The authors are sincerely thankful to PRRM College of Pharmacy, Kadapa for provided us infrastructure facilities and moral support to carry out this research work.