ABSTRACT: The 2-aminobenzothiazole moiety and its derivatives have immense importance in medicinal and pharmaceutical chemistry as a potent biologically active molecules. The synthesis of 2-aminobenzothiazole derivatives carried out from substituted phenyl thiourea which is synthesized by substituted aniline in ionic liquid (1-butyl-3-methylimidazolium) bisulphate ([BMIM] + [HSO4]-), (1-butyl-3-methylimidazolium) tetrafluoroborate ([BMIM] + [BF4]-) and (1-butyl-3-methylimidazolium) hexafluorophosphate ([BMIM] + [PF6]-). Further N-alkylation at amino group of synthesized 2-aminobenzothiazoles was carried out with alcohol using conc. H2SO4 and Schiff bases are also prepared by reaction of substituted 2-aminobenzothiazoles and aromatic aldehydes. ILs are green alternate of volatile organic solvents and they are beneficiary environmentally and economically.  The reactivity, reaction rate and yield were enhanced by using ILs and the products were recovered by simple filtration. 2-N-alkylaminobenzothiazoles and Schiff base derivatives are very important structural units in many medicinal compounds. The synthesized compounds can show many biological activities like antitumor, antimicrobial and anti analgesic. The characterization of synthesized compounds was done by elemental and spectral analysis.

INTRODUCTION: Heterocyclic chemistry is one of the most complex branch of organic chemistry. Heterocyclic compounds show high degree of structural diversity. They are accepted as economically useful therapeutic agents. Synthetically produced heterocycles are useful as agrochemicals and pharmaceuticals and play an important role in human life. Nitrogen and Sulphur containing heterocycles represent the core structural units of biologically active compounds.

There are several methods and conditions reported for the synthesis of substituted 2-aminobenzothiazoles 9, but we tried to make the procedure efficient and simple. In the present work green solvent common IL is used in order to improve the yield.

MATERIAL AND METHODS: Melting points were taken in open glass capillary tube using Gallenkamp melting point apparatus and are uncorrected. The purity of synthesized compounds were checked by thin layer chromatography (TLC) and visualized by UV light or in iodine chamber. The IR Spectra were recorded in KBr on SHIMADZU 8400S FTIR Spectrophotometer and wave no. is given in cm-1. The 1H NMR were recorded on JEOL AL Spectrometer in CDCl3/Me2SO-d6 using TMS as an internal standard at 300.15 MHz, respectively and chemical shift were measured in δ ppm. The elemental analysis (C, H and N) were performed using vario-III analyser at CDRI Lucknow.

The substituted aniline, bromine and chemicals required for ILs which are commercially available were purchased from Sigma Aldrich and used without further purification.

General Method of preparation of substituted 2-aminobenzothiazole (3a-b): Substituted aniline (0.1mol) on reaction with potassium thiocyanate (0.1mol) in the presence of IL (2.0 ml) gives substituted thiourea. Further, in a round bottom flask substituted thiourea (0.1mol) mixed with chloroform was stirred for 15 minutes on a mechanical stirrer. Then a mixture of bromine in chloroform was added drop wise at 0-5οC with stirring. When bromine was completely added in the mixture further refluxed it for 4 hrs and filtered.

General Method of preparation of Schiff base derivatives of substituted 2-aminobenzothiazole (5a-b): Mixture of 2-aminobenzothiazole (0.01mol) and aromatic aldehyde (0.01mol) is taken in mortar add conc. H2SO4 (0.25 ml), water (5 ml) and ILs (2.0 ml) and stirred at room temperature for 30-40 minutes. After the completion of the reaction add 25 ml water. Now filter the separated solid and wash with water and crystalized from ethanol.

Note: In all above methods the progress of the reaction controlled by TLC.

RESULTS AND DISCUSSION: Substituted phenyl thioureas were prepared by the reaction of substituted aniline with potassium thiocyanate in the presence of ionic liquids 10 (ILs) as catalyst at ambident temperature. These synthesized thiourea undergoes cyclization to give corresponding 2-aminobenzothiazoles (3a-b) in ILs 11. The synthesized 2-aminobenzothiazoles were further treated with alcohol in the presence of Conc. H2SO4 and ILs to form corresponding N–alkylated substituted benzothiazoles 12-13 (4a-b). In other reaction substituted benzothiazoles were treated with aldehyde (Aromatic and heteroaromatic) to form corresponding Schiff bases 14-15 (5a-b). The product formation depends on the nature of the attached substituent’s means the more electrons releasing group would give more amount of the product than those compounds which have electron attracting groups. Synthesis of all of these compounds shown in the Scheme 1.

The proposed structure of synthesized compounds is well supported by elemental analysis and spectral data. The structural assignments to the new compounds were based on their elemental analysis and spectral (IR and 1H NMR) data. The formation of substituted 2-aminobenzothiazoles and their alkylated and Schiff base derivatives was confirmed by 1H NMR and IR spectra. IR spectrum showed sharp absorption bands at 3550-3490 cm–1 and 3340-3285 cm–1­ due to asymmetric and symmetric vibrations of primary amino group respectively in substituted 2-aminobenzothiazole (3a-b). 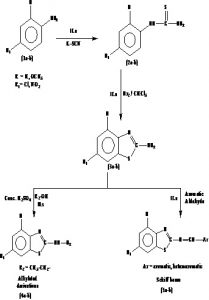 CONCLUSION: 2-aminobenzothiazoles and their derivatives possess a wide range of biological properties hence their moieties are centre of current interest among number of researchers around the world. Among the three different moieties under study, substituted 2-aminobenzothiazoles, their alkylated derivatives and their Schiff bases the last one show more biological properties.

TABLE 1: COMPARATIVE %YIELD OF THE PRODUCTS

ACKNOWLEDGEMENTS: The authors are extremely thankful to the Head, Department of Chemistry, University of Rajasthan, Jaipur for providing necessary facilities. The financial support by CSIR (K.Yadav & P.G. Goswami), and UGC (Start up Grant Project, D.K.J.) New Delhi is duly acknowledged.