Categories Menu
Home » AN EPIDEMIOLOGICAL SURVEY OF ARTHRITIS IN THE POPULATION OF NORTH GUJARAT, INDIA

Methodology: Detailed questionnaires were designed to collect data randomly from 260 patients of rural and urban area of Palanpur and Mehsana districts.

Results: Prevalence of OA was found to be 3.11% where as that of RA was 0.06%. Furthermore, the prevalence ratio (male: female) for OA was 1:1.19, where that of for RA was 1:4. Prevalence of OA and RA is significantly higher in urban area than in rural area. Suffering for most arthritic patients is more than five years indicating its chronic nature. The usage of Allopathic medicine for the treatment for OA and RA is highest as compared to other therapies. Family history for OA and RA patients was found 20% and 28.57% respectively indicating hereditary factor for diseases. More numbers of parts affected in RA patients than that of OA suggesting severity and systemic effect of RA. Hence awareness of RA patients for pharmacological as well as non pharmacological treatment, knee replacement like surgery is higher than OA patients. Most of OA patients are just taking pain killer drugs (NSAIDs) irregularly without taking any therapy. Though RA is autoimmune disease patients did not prescribed newer DMARDs and monoclonal antibodies indicating cost factor and lack of awareness. Very few arthritic patients were undergone for the diagnostic tests like RA test but after diagnosis of RA, the patients were found more conscious for the regular checkup and treatment.

Conclusion: So it is reasonable to conclude that OA and RA both are most common inflammatory and chronic arthritis, which are responsible for high morbidity in the patients. So proper awareness, patient counseling and proper drug therapy are necessary for the better treatment of OA and RA.

INTRODUCTION: Arthritis is a chronic and inflammatory disease, which mainly affects the joints and concerned with high morbidity in the patients. Joint pain is a very common complaint among the elderly 1, 2, which may lead to functional limitations, decreased quality of life, and increased health care costs. It often named as “Silent thief”, “king of human miseries” and “Great crippler”. Both environmental and genetic factors may contribute to the development of joint pain. For example, previous studies have suggested that farming contributes to increased frequency of joint symptoms 3-6, and that being overweight is also associated with increased prevalence of joint pain 7-9. From many types of arthritis, Osteoarthritis and Rheumatoid Arthritis are very common and affecting vast number of arthritic patients.

Osteoarthritis (OA) is the most common form of arthritis affecting one out of eight people between the ages of 18 and 79 worldwide. OA affects three times as many women than men. OA affects around one in four Indians and is more common than cancer and heart disease combined. No one knows for sure what causes it, but research shows that heredity, excess weight and previous joint injuries are major factors. Although OA is not the only musculoskeletal disease contributing to joint pain, it is the most common type of joint disease in geriatric patients 10.

Rheumatoid Arthritis is an autoimmune disease that mainly affects the tissues around joints. An immune response allows toxic mediators to penetrate the cells, leading to inflammation and granulation of cartilage and bone. RA is most frequent chronic inflammatory rheumatoid disorder in adults. It affects between 0.5 and 1% of the population. Onset is generally between 35 and 55 years. It is three to four time more frequent in woman. Among the diseases that affect humans, wide spectrums of 4 systemic and organ specific diseases are wholly or partially attributed to autoimmunity. This disease is mainly occurring due to auto antibodies, which are also apparent in the sera of normal mice and healthy humans. Rheumatoid arthritis is a chronic inflammatory illness. It is an autoimmune disease in which the immune system attacks normal tissue components as if they were invading pathogens. This illness affects about one percent of the world's population. The inflammation associated with rheumatoid arthritis primarily attacks the linings of the joints. However, the membranes lining the blood vessels, heart, and lungs may also become inflamed 11.

With increasing number of arthritis cases in North Gujarat population, the present study was undertaken with following main objectives:

METHODOLOGY: Patients are so unaware about disease so they do not prefer to go to clinic to take treatment and also they are not undergoing for clinical tests, often. So, we have surveyed different rural and urban areas of North Gujarat for epidemiological study of OA and RA. Patients were individually contacted and the data obtained by direct questionnaire method with their moral support to us. Data obtained by counseling at patient’s home. Data regarding patient’s are Age, Weight, Sex, Body build, Life style, Economic status, Type of stress, Duration of illness, Current and past treatment, Family history, Drug and Non drug treatment, Clinical data like R.A. test, ESR, synovial fluid, Vasculitis lesion etc., Affected part, Extra articular features (Fig. 1- 4). 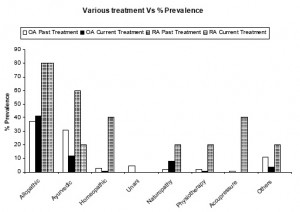 FIG. 1: VARIOUS TREATMENTS GIVEN TO THE PATIENTS HAVING OA AND RA 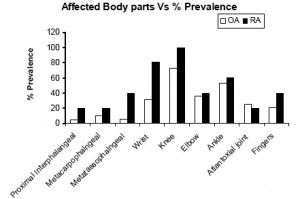 FIG. 2 % PREVALENCE WITH DIFFERENT AFFECTED PARTS OF BODY IN OA AND RA 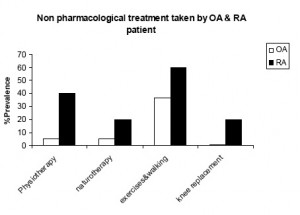 FIG. 3: DIFFERENT NON- PHARMACOLOGICAL TREATMENTS GIVEN TO THE PATIENTS HAVING OA AND RA 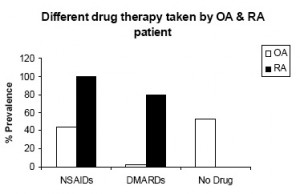 FIG. 4: DIFFERENT PHARMACOLOGICAL TREATMENTS GIVEN TO THE PATIENTS HAVING OA AND RA

RESULTS AND DISCUSSION: In the epidemiological study, we found prevalence of OA as 3.11% and that of RA as 0.06%. The prevalence of RA is found very less as compared to that of worldwide prevalence that is around 0.5-1%. The reason behind this is most of the arthritic patients won’t go for clinical diagnosis due to lack of awareness of RA, so most of the patients will remain undiagnosed forever. The reasons behind high prevalence of OA are: (a) May be due to high fluoride content in North Gujarat that is more than 1.5 ppm (12) (b) May be due to heavy work load. Prevalence of OA and RA is significantly higher in urban area than in rural area. The reasons behind OA in rural area is regular walk of long distance over rough ground and frequently lift heavy objects and for that of urban area is high stressful life style, high obesity and less movement, with bad sitting and standing habits like squat and sit cross leg for long time.

Furthermore, the prevalence of OA in females is little higher than in males i.e. ratio of male to female is 1:1.19; while females are four time more prone to get RA than male. Probable reasons are hormonal changes during woman’s menstrual cycle affect the elasticity of the body’s ligaments. An American study reveal that woman’s knee do not contract under stress as men’s do, putting their knee joints at greater risk. Researchers have proved that woman who play sport involving jumping and pivoting are up to eight times more likely to injured their knees than men playing same sports.

The onset is somewhere in between 31-40 years and most of the arthritic patients (73%) fall in between 41-70 years of age class that shows elder patients are more affected by this type of disease due to sedentary life after heavy work load. While many people regard arthritis as a disease of elderly but literature says that OA and RA can strike at any age in younger patients, e.g. juvenile onset RA affects lot of children.

Around 67.46% of patient fall in the weight class 51-70 kg so it may be concluded that patients with high weight are more prone for disease due to load on joints of bone. For middle class prevalence of arthritis disease is 85.32%, which may be due to heavy workload, inappropriate self-care and food intake, which is, not fulfill the nutritional requirement. Duration of illness in most arthritic patients is more than five year indicating its chronic nature. Patients suffer from arthritis disease for more than 10 year with prevalence of 6.33% and in between 5 to 10 years with 39.60% prevalence. The chronicity of OA and RA is due to persistent and sustained inflammation of joints and also with unavailability of any particular drugs, which can eradicate the disease because all the drugs only suppress the symptoms and all the patients can’t afford knee replacement like treatments. Disturbed sleep is commonly observed in patient due to pinching pain in 52.83% in OA while 40% in RA all over the body joints shows that patient even in night can not sleep well. RA patients are more aware of for Non-Pharmacological treatment (like Physiotherapy, Naturopathy, Exercise and walking) than OA patients (Fig. 3). Moreover surgical procedure like knee replacement was performed more on RA patients than OA, indicating high severity of RA than OA and also less awareness of OA patients to their less severe pain

As far as pharmacological treatment is concerned, RA patients are taking more NSAIDs and DMARDs than that of OA patients. Most of OA patients are just taking pain killer (NSAIDs) drug and that too very irregularly and also some OA patients haven’t taken any therapy considering it as minor disorder. One important point noted here is even after RA is autoimmune and systemic disorder, most of RA patients are undergone treatment with NSAIDs and DMARDs like methotrexate but none of the patients were given the newer DMARDs and newer monoclonal antibodies for the treatment indicating cost factor and lack of awareness.

In the treatment of arthritis 43.92% patients take NSAIDs and nearly 90% of them take self-treatment due to less awareness, lack of physician’s counseling (Fig. 4). The usage order of different treatment is Allopathic>Ayurvedic> Homeopathic>Naturopathy>Acupressure>Physiotherapy>Unani. Patient changes their therapy one by one to get relieved from disease but none of the therapy gives complete cure (Fig. 1). Patient who are suffering form disease have family history for disease in 28.57% in OA while 20% RA patient, which may highlight genetic and heredity effect on disease.

CONCLUSION: Prevalence of OA is 3.1% and that of RA is 0.06% in North Gujarat population and responsible for high morbidity in patients. Prevalence of arthritic diseases is more in elderly age persons. Female are more prone to get OA and RA than male. Heavy or sedentary life style is responsible for this type of joint disease. Wrist, knee, elbow and ankle type of joints are more affected by OA and RA. Numbers of affected joints are high in RA as compared to OA, which indicate the severity is much higher in RA than in OA. Both RA and OA are chronic disorders, with disturbed night sleep and pinching pain all the time. Most of OA patients prefer self-medication with NSAIDs treatment where as more RA patients were given with the NSAIDs as well as DMARDs therapy. Therefore, proper awareness, patient counseling and proper drug therapy are necessary for the better treatment of OA and RA.