Categories Menu
Home » AN HPLC WITH PHOTODIODE ARRAY DETECTION METHOD FOR SIMULTANEOUS DETERMINATION OF ENROFLOXACIN AND ITS ACTIVE METABOLITE, CIPROFLOXACIN, IN CHICKEN MEAT

AN HPLC WITH PHOTODIODE ARRAY DETECTION METHOD FOR SIMULTANEOUS DETERMINATION OF ENROFLOXACIN AND ITS ACTIVE METABOLITE, CIPROFLOXACIN, IN CHICKEN MEAT

AN HPLC WITH PHOTODIODE ARRAY DETECTION METHOD FOR SIMULTANEOUS DETERMINATION OF ENROFLOXACIN AND ITS ACTIVE METABOLITE, CIPROFLOXACIN, IN CHICKEN MEAT

ABSTRACT: A reverse-phase liquid chromatography (LC) method was developed for the simultaneous estimation of enrofloxacin and its active metabolite ciprofloxacin residues in chicken meat. These two fluoroquinolones were extracted from homogenized tissues with phosphate buffer under acidic conditions, followed by acetonitrile. The isocratic LC analysis was performed on Phenonmenax, C18 RP column (250 × 4.6 mm, 5 μ) using a mobile phase composed of 0.025M potassium phosphate solution (pH 3.25) and acetonitrile in the ratio of 75:25 (v/v), at a flow rate of 0.500 ml/ min. Quantitation of enrofloxacin and its metabolite were performed using a PDA detector set at the wavelength of 277 nm. The temperature of the column was 300C, and the total run time was 20 min for the analysis of both drugs. The retention time was found to be 10 min for ciprofloxacin and 13 min for enrofloxacin. The r2 values for linearity studies were greater than 0.98, and the accuracy (% recovery) was greater than 88% for both the drugs. The linearity was observed in the range of 10 to 1000 ng/ml with correlation coefficient, r2 = 0.9895 and 0.9801 for enrofloxacin and ciprofloxacin, respectively. The average recovery of enrofloxacin and ciprofloxacin from fortified control tissue samples was in the range of 88 to 94%. The limits of quantification for enrofloxacin and ciprofloxacin were 30 and 35 µg/kg in chicken tissues under photodiode array detection. The linearity, recovery, and detection limits of the method were evaluated from spiked tissue samples and results were found good and within range.

INTRODUCTION: Antibiotics are widely used in animal husbandry for the treatment and prevention of diseases and as feed, additives to increase the animal mass 1.

Fluoroquinolones have been the most important group of synthetic antibiotics used in medical and veterinary drugs to treat and prevent various infectious diseases ever since they were developed about 40 years ago 2.

Despite their benefits, misuse of antibiotics has resulted in the development of nonpathogenic and pathogenic resistance by living organisms. Also, the illicit use of antibiotics can increase the risk of food-borne infections with antibiotic-resistant pathogenic bacteria contaminating food for human consumption 3.

Enrofloxacin and ciprofloxacin are second-generation fluoroquinolones with a broad spectrum of antibacterial activity. Both have good bioavailability after oral administration and good to excellent tissue distribution 4.

Enrofloxacin, 1-Cyclopropyl-6-fluoro-7-(4-ethyl-1-piperazinyl)- 1, 4- dihydro- 4- oxo-3- quinoline-carboxylic acid, belongs to fluoroquinolone family which is a subfamily of quinolone. The first quinolone is the Nalidixic acid used in the animal at the beginning of 1980s, enrofloxacin is the first fluoroquinolone patented in 1984 5. The most important indication of enrofloxacin in all of the species is the treatment of respiratory infections, but it is also indicated in the treatment of digestive, urinary, joint, genital, mammary, and dermal infections 6-7.

Human exposure to fluoroquinolones (FQs) due to its presence in foods of animal origin can contribute to adverse effects on health. In fact, the presence of FQs in foods of animal origin can also constitute a resistance selection to the pathogens 10. To protect human health, the European Union has set Maximum Residue Limits (MRLs) for fluoroquinolones in products from animal origin. The MRL has been stated at 100 µg/kg for the sum of enrofloxacin and its active metabolite (ciprofloxacin) for muscle tissue 11. Therefore, the establishment of a sensitive method for the analysis of these drugs is required for the quality control of animal-based food products.

Several analytical techniques have been reported for the determination of fluoroquinolones in various animal products. High-Performance Liquid Chromatography (HPLC) can be used efficiently in the analysis of fluoroquinolones as it offers rapid results and it is specific and sensitive 12. Different types of detectors, such as UV or fluorescence detectors can be coupled to HPLC. UV detectors are often preferred because they are cheaper and more easily available 13. Mass spectrometry (MS) detectors can also be used. Although HPLC–MS offers excellent selectivity and sensitivity, it is relatively expensive instrumentation, and skilled technical expertise is required 14. Therefore, the most commonly used analytical technique for the determination of FQs is HPLC with photodiode array detection. Photodiode array detector offers advanced optical detection for innovations that deliver high chromatographic and spectral sensitivity. This provides the benefit of time-saving, cost reduction on expensive solvents, and full scanning of UV/Visible range.

The determination of fluoroquinolones in various biological samples has been described several times, and only a few reports have described the determination of fluoroquinolone and its active metabolite in chicken muscle by HPLC. High-performance liquid chromatography (HPLC) with fluorescence 15-26, ultraviolet 27, or mass spectro-metric 28 detection methods has been reported to assay enrofloxacin and its active metabolite ciprofloxacin in chicken muscle.

We recently report the development of analytical methods to determine fluoroquinolones in the tissues of poultry 29-30. These methods have been further simplified with good results and applied to chicken meat. This paper reports the development of extraction procedure and high performance liquid chromatographic analysis method for the determination of enrofloxacin and its active metabolite, ciprofloxacin in chicken meat, requiring small amounts of organic solvents and other chemicals. The major advantage of the proposed method is that enrofloxacin and ciprofloxacin can be determined on a single chromatographic system with the same detection wavelength. The advantages lie in the simplicity of sample preparation and the low costs of reagents used. The proposed HPLC conditions ensure sufficient separation and the precise quantification of the compounds.

Extraction of Samples: The chicken muscle samples were obtained from the healthy birds that were not treated with any veterinary drugs. The tissue samples were deep-frozen until analysis for determination of both drug residues. The tissue samples were thawed to room temperature and then cut into small pieces. An accurately weighed 1.0 gm of tissue sample was placed in 15.0 ml polypropylene centrifuge tube and homogenized using Polytron Homogenizer (PT 1600 E) with 6.0 ml of phosphate buffer. From this resultant homogenate, 3.0 ml was taken into a 15.0 ml polypropylene centrifuge tube and to this added 2.0 ml of acetonitrile and the tube was tightly capped and vortexed for 5 min using Spinix Vortex (Tarsons Products Pvt. Ltd., India). Mixture was then sonicated and left undisturbed for 10 min. Later, the mixture was centrifuged for 15 min at 5000 rpm using Research Centrifuge R-24 (Remi, India). The supernatant was decanted into another tube and centrifuged once again at 8,000 rpm for 30 minutes using Cooling Centrifuge CM-12 (Remi, India). Finally, supernatant was filtered using 0.2μm (nylon + glass fibre) mdi syringe filter (Advanced Microdevices Pvt. Ltd., India). 20μl of this filtrate was then injected into the HPLC system for analysis.

Instrumentation: High-Performance Liquid Chromatography (HPLC) was carried out on a Shimadzu system (Shimadzu, Kyoto, Japan). The system was equipped with a Quaternary gradient pump (LC-10ATvp), a Photodiode array detector (SPD-M10Avp), a Column oven (CTO-10ASvp), a System controller (SCL-10Avp), a Degasser (DGU-14 Avp), and an Autoinjector (SILL-10ADvp). The CLASS VP Software package was used for instrument control, data acquisition, and data analysis. A reverse phase, Luna C18 column, 250 mm × 4.6 mm with a particle size of 5 μm (Phenonmenax) was used as stationary phase for separation of the compounds.

Chromatographic Conditions: The isocratic mobile phase consisting of buffer solution (Potassium phosphate, pH 3.25 adjusted with ortho-phosphoric acid) and acetonitrile in the ratio of (75:25, v/v) was used throughout the analysis. The mobile phase was mixed and filtered through a 0.2 μm nylon membrane filter (Borosil, India) using a glass vacuum filtration apparatus and degassed by sonication in an ultrasonic bath for 5 minutes. The flow rate of the mobile phase was maintained at 0.5 ml/min, and the injection volume was 20 µl. A Photodiode array detector was operated at a wavelength of λmax = 277 nm. The retention times for ciprofloxacin and enrofloxacin were about 10 and 13 min, respectively. The column was carried out at an oven temperature of 30 ºC and total run time for the analysis of both drugs was 20 min.

Stock solutions of 1 mg/ml of enrofloxacin and ciprofloxacin were prepared in few drops of water and diluted with HPLC grade methanol. All stock solutions were stored refrigerated at 4°C. Individual working solutions of both drugs were prepared daily from the stock solutions by diluting with methanol. The phosphate buffer solution (0.025M) was prepared from Potassium dihydrogen phosphate and milli-q water. 1.7 gm of Potassium dihydrogen phosphate was dissolved in 500 ml of water. The pH of the buffer solution was adjusted to 3.25 using diluted solution of ortho- phosphoric acid. 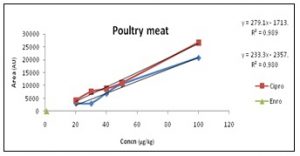 TABLE 2: RECOVERIES FOR ENROFLOXACIN AND CIPROFLOXACIN FROM CHICKEN TISSUES AT DIFFERENT CONCENTRATION LEVELS

TABLE 3: LIMIT OF DETECTION (LOD) AND LIMIT OF QUANTIFICATION (LOQ) FOR ENROFLOXACIN AND CIPROFLOXACIN IN CHICKEN TISSUES

Representative chromatograms for blank determination, mixture of both drug standards and spiked chicken tissues homogenate are shown in Fig. 3. 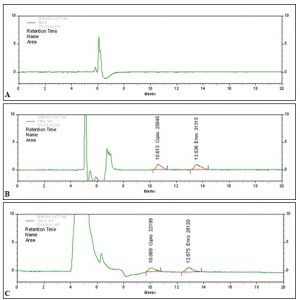 CONCLUSION: A high-performance liquid chromatographic with PDA detection method was developed for simultaneous determination of enrofloxacin and its active metabolite, ciprofloxacin in chicken meat. A sensitive, simple, and fast sample treatment procedure was developed and used in order to extract the fluoroquinolones from the tissue samples with average recoveries 88 to 94%. The limits of detection (LOD) were 9.0 and 10.50 µg/kg, as well as the limits of quantification (LOQ), were 30 and 35 µg/kg, respectively for enrofloxacin and ciprofloxacin in chicken tissues which are well below the Maximum Residue limit (MRLs)  for both drugs. The separation results and validation parameters developed in this method are good and within range to determine both fluoro-quinolones in chicken tissues. The proposed method can be applied for routine determination of the two fluoroquinolones in chicken tissue samples.

ACKNOWLEDGEMENT: The authors are thankful to the Department of Chemistry, Sam Higginbottom University of Agriculture, Technology & Sciences, Prayagraj (Allahabad), for providing the facilities required for the research work.