ABSTRACT: Objective and Background: To study the immunological activity of aqueous extract of Oxalis corniculata in Albino wistar rats and Swiss Albino mice. The Oxalis corniculata is an edible and a medicinal plant which is important to the food industry and may also have a significant role to play in health care. Material and Methods: The aqueous extract of whole plant of Oxalis corniculata was adminstered orally at the dose of 200mg/kg/day and 400mg/kg/day body weight. The assessments of immunomodulatory activity were studied by haemagglutination antibody titre, delayed type hypersensitivity, cyclophosphoamide neutropenia and carbon clearance test. Cyclophosphamide and Levamisole used as immunostumulating agent. Observation, Finding and Conclusion: Oxalis corniculata is of considerable importance to the food industry and also possesses a wide spectrum of pharmacological property of immunomodulation which are associated with its diverse chemical constituents, including flavonoids, alkaloids, polysaccharides, fatty acids, terpenoids, sterols, proteins, Vitamins, and minerals. Discussion and Importance: Immuno-modulatiom is a process which can alter the immune system of an organism by interfering with its functions; if it results in an enhancement of immune system it is named as immunostimulative drug which primarily implies stimulation of specific and non-specific system i.e. granulocytes, macrophages, complement certain T- lymphocytes and different effecting substances. Hence, more mechanistic studies are required before Oxalis corniculata can be considered for further clinical use. Although bioactivities of extracts or compounds isolated from Oxalis corniculata are substantiated by using in vitro and in vivo studies including animal models and cell culture studies. The finding authenticates its use in drug production and other therapies, and to enhance further its usage and research- study.

INTRODUCTION: Immunomodulation is a process, which alters the immune system of an organism by interfering with its functions.

This interference results in other immuno-stimulation or immunosupressor. An immuno-modulator is a substance that helps to regulate the immune system. This regulation is normalisation process, so that an immunomodulator helps to optimise immune response. Immunomodulators are becoming very popular in the world wide natural health, where as these do not tend to boost immunity, but to normalise it. Keeping in this view, efforts have to be direct to modulate the immune responses, to permit the effective treat of various ailments associated with immune system and thus the development of a safe and effective immunomodulator for clinical use. Immuno-modulators are biological modifiers; exert their effects by improving host defence mechanism against disease. Immune regulation is a complex balance between regulatory and effecter cells and any imbalance in immunological mechanism can lead to pathogenesis 1.

Herbal medicine has become an integral part of standard health care, based on a combination of time honoured traditional usage and ongoing scientific research. Increased interest in medicinal herbs has prompted for scientific scrutiny of their therapeutic potential and safety. Some of the medicinal plants are believed to enhance the natural resistance of the body of infections 2.

Oxalis corniculata, the creeping wood sorrel is a weed grown in the moist places and oftenly found in gardens, waste lands, roadsides and hedges. It thrives best in well-drained and loamy soil but is acidic in nature, preferring no shade, with wide geographical distribution, also called Procumbent Yellow sorrel or sleeping beauty resembles the common yellow wood sorrel having perennial/ annual life cycle. In the warmer places the plant shows perennial life cycle but in the cold place its life cycle is annual due to the overwinter temperature 3. This plant usually attains the length of 18-20cm long, stolon type horizontal stems above the ground.

The stem has smooth as well as hairy texture, runner or decumbent, rooting at nodes. Some of the roots are taproot, with underground rhizome. It has smooth, slender prostate stems and alternate leaves clustered at stem joints and ends. The yellow flowers open singly at the centre of the leaf clustered only of few hours on sunny morning. Seeds are formed in a tiny pod which opens when seeds are mature. It has a tap root with fibrous secondary roots and is able to tolerate poor compacted soils and drought. The plant is traditionally used as anti-rheumatic and antifungal. This plant is also pharmacologically studied for its anti fungal, antioxidant, antimicrobial, anti-flammatory, antidiabetic, diuretic, analgesic and wound healing properties 4.

The reproduction of the Oxalis corniculata plant occurs due to the dispersion of seeds whether the corolla is removed or not, seed set occurred when flowers were left to self pollinate. The seeds are packed in smooth turgid arid which breakdown suddenly along the abaxial axis and turns inside out 5. This makes the dispersal of seeds to happen at a considerable distance from the parent plant up to 2m. As the one seed ejects from the capsule the other seeds start to disperse in way of continuous chain but in a very short time. Its seeds are sticky and adhere to any surface easily 6.

Plant Material: The fresh whole plant Oxalis corniculata were collected from the local market of and vegetation gardens of Bhopal MP India.

Preparation of Extract: Dried coarsely powdered tubers of Oxalis corniculata (400g) were defatted with water at for 72 hrs using maceration process. The crude brown residue mass of extract was then concentrated, stored and preserved (2-8 °C). The Percentage yield of extract (4.8w/w) was found on dry wet basis.

Drugs and Chemicals: All the drugs and chemicals were of analytical grade while the other drugs were procured from Levamisole (Lupin Pharmaceutical Mandideep), Cyclophosphamide (Lupin pharmaceutical, Mandideep), Colloidal carbon (Indian ink, camel India Pvt. Ltd.).

Mice weighing between 20-25gm in groups of five were used (n = 5). The animals were fasted for 4 hr. with free access to water only. The aqueous extract was administered orally in doses of 200 and 400mg/kg to different groups of mice and rats and observed over 48 hours for mortality and physical/ behavioral changes. The experiments were performed after the experimental protocols had been approved by the Institutional Animal Ethical committee 7.

Delayed Type Hypersensitivity (DTH): Animals were sensitized with 0.1ml of 10% SRBC (1×108 cells) at day zero. Test sample will be administered -3 days to +3 days of SRBC immunization (administration of test sample may change as per protocol). On day 7, animals will be challenged with 1 × 108 SRBC cells, intradermally into the left footpad of each animal, while PBS (pH 7.4) will be injected into right hind paw. The increase in foot pad thickness (FPT) will be measured 24 hours after SRBC challenge by digital vernier caliper 9.

Cyclophhosphoamide Neutropenia: Cyclophos-phamide induced neutropenia. Swiss albino mice received the drug or vehicle orally for 5 days. On 5th day, neutropenic dose of cyclophosphamide (200mg/kg, s.c) was injected and this day was labelled as day zero. Blood was collected; the total leukocyte count (TLC) and DLC were performed prior to and on day 3 after injection of cyclophosphamide. The TLC and neutrophil counts (%) in treated groups were compared with the values of the control group 10.

Carbon Clearance Test: Test samples were administered for five days. On day six, all the groups were given 0.1ml of carbon ink suspension through the tail vein. Blood was collected from retro orbital plexuses of individual animals at 0 and 15 minutes immediately after the injection carbon suspension. Blood (25µl) was lysed with 2ml of 0.1% sodium carbonate and the absorbance was measured spectrophotometrically at 675nm for determination of optical densities 11.

Hemaggulutination Antibody Titre: Hemaggu-lutination antibody titre assay is an important investigation of components acting on humoral immunity. Antibody molecules, a product of lymphocytes and plasma cells, are cellular to humoral immune response, IgG and IgM are the major immunoglobins which are involved in the complement activation, opsonisation, neutralization of toxins. In 200mg/kg of Oxalis corniculata extract treated animals titre valve was to be non significant 3.66 ± 1.032. In the 400mg/kg Oxalis corniculata extract treated animals titre value was found to be more 5.16 ± 0.983 shown in Table 1 and Graph 1. 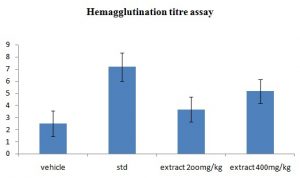 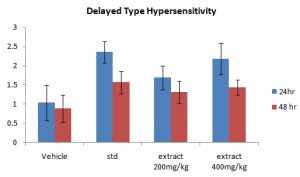 Carbon Clearance Test: The increase in carbon clearance index reflects the enhancement of the phagocytic function of mononuclear macrophages and non- specific immunity. Macrophages are innate immune cells with well established roles in primary responses, inflammation and repair. In 200 mg/kg of Oxalis corniculata extract treated animals titre value was found to be more 0.0061 ± 0.0009** (p < 0.001) as compared to vehicle treated animals at 0.034 ± 0.0012 even in standard drug treated animals titre value was significantly more 0.117 ± 0.0019. 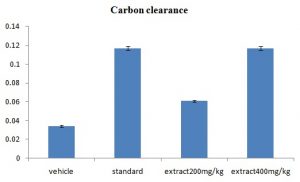 Cyclophosphoamide Induced Nutropenia: The percentage reduction in neutrophil count was found to be and in control and OSE groups respectively. The low and high dose of aqueous extract of Oxalis corniculata (AEOC) demonstration 40.00% and 48.23% reduction in neutrophille count compared to initial values. In 400mg/kg extract the value was 2119 ± 102.11 ** (p < 0.001). 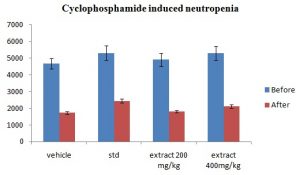 DISCUSSION: The immune system is a complex system, to protect the host from invading and to eliminate diseases. Immunomodulators are being used as an adjuvant in conditions of immunodeficiency in cancer and other immunodeficiency syndrome 12. In this present study, Oxalis corniculata Linn. showed increasing antibody production. It may be the release of mediators of hypersensitivity reactions and tissue responses to these mediators in the target organs by Oxalis corniculata. Organoleptic evaluation of any extract provides a significant data to standardize an extract. Even though enhances of human error are much more in this part. Further phytochemical investigations were performed to a certain presence and or absence of a range of bioactive components in extract 13. It was observed that aqueous extract of Oxalis corniculata was devoid of the most of the phytochemical classes it was found to be rich in saccharides, omega-3 fatty acid, glycosides 14.

Acute oral toxicity revealed of the aqueous extract of Oxalis corniculata of the whole plant was not found having any acute toxicity. Basic endeavour of the present study was to evaluate Immunomodulatory effect of aqueous extract of Oxalis corniculata. This effect was ascertained   on the basis of effect on the cellular immunity, humoral immunity, neutropenia and phagocytosis. In the extract treaded animals paw thickness was found to be more (p < 0.05). As compared to vehicle treated animals paw thickness was notably more (p < 0.05). This confirmed that extract was modulating cellular immunity 15.

The delayed type hyper sensitivity (DTH) that was measured this experiment has only some measure component sensitization, release of cytokinins and inflammation 16. DTH reaction is characterized by invasion of non - specific inflammatory cells, in which the macrophages is a determine participants. It is a type IV hypersensitivity reaction that developed when antigen activates sensitized TDTH cells. These cells generally appears to be a THI The Cyclophosphoamide induced nutropenia model concentrates on the protective effects against Cyclophosphoamide induced myelosuppression in the experimental animals 17.

Both low and high doses of AEOC caused decrease in the Cyclophosphoamide induced nutropenia suggesting that it attenuates the effect of Cyclophosphoamide on the haemopoetic system 18. Immunomodulatory agents can enhance or inhibit the immunological responsiveness of an organism by interfering with its regulatory mechanisms. They may selectively activate either cell-mediated or humoral immunity by stimulating either TH1 or TH2 type cell response, respectively 19.

Immunomodulatory agents that are free from side effects and which can be administered for long duration to obtain a continuous immune activation are highly desirable for the prevention of diseases. There is a variety of naturally and chemically derived compound discovered with the Immunomodulatory activity such as Levamisole, cyclophosphamide 20. The role of phagocytosis is primary the removal of microorganism and foreign bodies, but also the elimination of dead or injured cells. Phagocytic defects are associated with varied pathological condition in humans 21.

CONCLUSION: The results of the present study suggest that the aqueous extracts of Oxalis corniculata may be beneficial in the treatment of impaired immunity. DTH requires the specific recognition of a given antigen by activated T lymphocytes, which subsequently proliferate and release cytokines. These in turn increase vascular permeability, induced vasodilatation, macrophage accumulation and activation, promoting increased phagocytic activity and increased concentration of lytic enzyme for more effective killing.