The Human immunodeficiency virus(HIV)type-1 integrase is one of the most important target of highly active anti retrovirus therapy (HAART), due toits role to incorporate genetic information into the host DNA, so its prevention to its proper function results in very fine therapeutic effect for the treatment of all acquired immune deficiency syndrome(AIDS), extensive research work on integrase inhibitors(INIs) haven’t carried out till present due to complexities in research with integrase and a very few drug are known to inhibit integrase. Dolutegravir is a new 2nd generation Integrase inhibitor (INIs) in a short list of INIs, recently approved by FDA in the list of HAART, so herein we taken Dolutegravir as a reference structure for virtually identification of more/similar efficient drug like leads then Dolutegravir using three different PDB structures (4S3O, 3S3M & 3S3N) of Integrase having in different mutated state from PDB database ‘RCSB’ versus chemical compounds database ‘ZINC’ using Schrodinger and Discovery Studio software. Using molecular constraint search with similarity coefficient ‘Tanimoto’, 1,65,000 ligands were extracted out and further docking analysis resulted in some better efficient in docking properties and computed medicinal parameters have been reported, and, they may further undergo through high end extensive virtual investigation and beyond, in such research laboratory where adequate research facilities are available.

INTRODUCTION: In silico Molecular drug design strategically very important tool in drug evaluation and optimization to more potent drug like leads, in preliminary investigation these tool make by day, very popular among medicinal chemist, these tools help to reduce cost and time frame for evaluating new drug candidate1, traditional drug design strategy have some very known limitation, which can resolve out by using in silico techniques

Global statistic reveals that new infection rate gradually going down by day, but still this disease worldwide categorically very dangerous, the recovery and rehabilitation from this disease is not easy and straightforward and medication only improve somewhat infection conditions under control. The life- cycle of human immune deficiency virus type-1(HIV-1) involves the intervention of multiple enzymes, most of them have been studied as potential drug target for the pharmacological response to prevent the disease HIV/AIDS. Among the list of these enzymes, one of them, HIV-1 integrase (IN) has a crucial role to catalyzes the integration between viral DNA to host DNA Strand, this process important for virus replication cycle 4, because human itself no such type of enzymes, so inhibition mechanism is selective without interference, Dolutegravir inhibits HIV integrase by binding to the integrase active site and blocking the strand transfer step of retroviral deoxyribonucleic acid (DNA) integration which is essential for the HIV replication cycle 5, on the basis of this mechanism of action we induce this work to find out more potent new INIs as similar to Doleutegravir, effective against mutant and wild both type of integrase, with better binding and medicinal properties simultaneously, fully on the basis of “in silico” techniques.

Dolutegravir (GSK1349572) is an anti-retroviral drug under the umbrella of integrase inhibitors (2nd generation) approved in 13 August 2013 by FDA marketed as brand name ‘Tivicay’ by GlaxoSmithKline (GSK) for use in a broad population of HIV-infected patients, which is used for hindering the activity of the integrase to its proper functionality in HIV 6.

In the work herein Dolutegravir is taken as reference molecule and find out 1% of similar molecules of each retrieved files of zinc drug bank (sd file) using similarity coefficient “Tanimoto” in DS 2.5.In a single job around 1350 molecules was found out molecular structures as similar to Dolutegravir, we performed as like total 118 jobs and a total 118×1350 molecules we found out and perform docking in Schrodinger software.

Integrase: The HIV-1 integrase is one of the most important targets of antiretroviral therapy used in the treatment of AIDS, this HIV protein has an important key role in viral replication as a catalytic protein that inserts the viral genome into the DNA of the host cell. Since integration is a vital step in retroviral replication blocking it can halt further spread of the virus.7 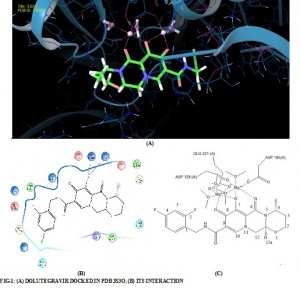 FIG.1: (A) DOLUTEGRAVIR DOCKED IN PDB 3S3O, (B) ITS INTERACTION DIAGRAM SURROUNDED AMINO ACIDS IN INTEGRASE AND (C) IN THE Mg2+ COORDINATION SPHERE

Experiment: X-ray crystallographic structuredata of HIV-1 integrase co-crystallized with INIs Dolutegravir retrieved as pdb file 3S3O, 3S3M & 3S3N from rcsb.org and prepared in protein preparation wizard of maestro with the following steps- preprocess(default settings), deleting all unnecessary water molecules and other structures except Dolutegravir and coordinated two Mg2+ ionswith it, added hydrogen, generated it states, optimization, and minimization (with OPLS2005 force field)with default constraint of the 0.3Å of RMSD and corresponding Grid are generated in these prepared pdbs with the Centre defined by the co-crystalized ligand Dolutegravir with defaultsettings included partial charge and saved all in pre-created directory folder.

Ligands extracted as previously mentioned procedure as similar to Dolutegravirwith DS V2.5 in job “ find similar molecules”  with settings 1% similar molecules to “Dolutegravir” with similarity coefficient “tanimoto” which is very well known accurate similarity measures, 118 such jobs were done and atotal 1,65,000 molecules are extracted out, which are structurally similar to Dalutegravir. These structurally similar moleules are prepared for docking jobs in ‘ligprep’ with force-field OPLS 2005 using “epik” with deselected options ‘desalt’ and selected ‘generate tautomer’ afterwards docking analysis were done in glide programme of  maestro, better then dolutegravir in docking score were separated out, whose docking score more than Dolutegravir selectively prepared in ‘ligprep’ with force field OPLS 2005 using ‘epik’ and with better protocol setting, docking again done in corresponding grid of pdb in glide programme. All docking calculations were performed using the “Extra Precision”(XP) mode of Glide Program with settings including sampling ligands ‘flexible’, optionally available various protocols for ligands constraints as rewards measure, partial charge of ligands and similarity measures to Dolutegravir  were included. 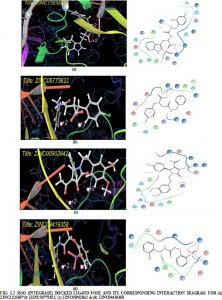 In this work, we have tried to recognized some more/similar potent drug like leads namely coded ZINC13235071(((2-chloro-4-fluorobenzyl)carbamoyl)-D-tryptophanate), ZINC 05773622((S)-4-(benzylamino)-2-(4-chlorobenzyl)-4-oxobutanoate), ZINC00902842 ((S)-4-acetyl-1-(3,4-dimethoxyphenethyl)-5-(4-fluorophenyl) – 2 -oxo-2,5-dihydro-1H-pyrrol-3-olate), ZINC 1323 5074(((2-chloro-4-fluorobenzyl)carbamoyl) – L -tryptophanate) & ZINC09419358(((2-chloro-4-fluorobenzyl) carbamoyl)-D-tryptophanate) instead ‘Dolutegravir’ these may be more effective, we used three different Integrase crystallographic structures for better identification/verification of our results and showing very fine computed properties, this study verify the importance of small drug like molecular libraries as like ‘ZINC.docking.org’and their use certainly help scientific groups to enhance their capabilities in drug discovery with reducing time, including drug discovery process prior synthesis. Herein identified molecules may further investigate instead “in silico”, where experimental facility are adequately available.

ACKNOWLEDGEMENTS: The authors wish to thank with proud and privilege to Will Richard, Raghu Rangaswamy and Vinod Dewarjee of Schrodinger ltd. for providing the Schrodinger Suite Software.