INTRODUCTION: Emergence of Multidrug-resistant (MDR) and persistent phenotypes of Staphylococcus owe to its molecular adaptive and evolutionary strategies 1. This brings them to the limited group of successful pandemic clonal species which has mainly evolved through mutation.

Apart from the core gene which mainly contributes to bacterial metabolic functions, the presence of Mobile Genetic Elements (MGEs) that normally encode for virulence and resistance determinants is the reason behind the divergent evolutionary levels 2, 3.

This includes the gene for beta-lactam antibiotic resistance gene paving the way for the emergence of Multidrug-resistant Staphylococcus aureus (MRSA) 4. Staphylococcus is a Gram-positive opportunistic pathogen, which is the main reason for septicemia infections, soft tissue inflammations, and toxin associated toxicity in eukaryotes. The enterotoxins (SE) encoded by MGEs cause food poisoning in spite of its commensal presence in humans being, an etiological transporter of foodborne diseases. Infection acquired from hospital scenario outrages community-acquired ones 5. There are more than 50 species and sub-species of Staphylococci of which S. aureus is often associated with pathogenicity in humans. Staphylococcus aureus is distinguished from the other species by its ability to clot blood plasma 6.

Even though Staphylococcal food poisoning is not a fatal infection, it causes depletion in health. As toxin is salt tolerant and heats stable, cooking fails in the evacuation of the bacterium. The depletion in the identification of new antibiotics and the emergence of MRSA through molecular adaption demands the phage therapeutic approach to control the incidence of Staphylococcal infections 7. Phage therapy or bacteriophage employed biocontrol measures have renewed the current scenario of the emergence of MDR. Bacteriophage therapy has been proven to be effective alone or in combination. This fact is supported by several clinical and animal trials proving that Staphylococcal phages effectively clear Staphylococcal infections, particularly Multi-Drug Resistant (MDR) 8, 9. Where antibiotics and vaccines fail to provide a safer biological environment, bacteriophage has proven its safety through host specific strategies 10. The advantage of phage over antibiotics listed includes its localized activity towards specific bacterium, absence of reproduction as the target bacteria get expunged and also it lacks secondary resistance which all are quite often in case of antibiotics.

Bacterium: Staphylococcus aureus were isolated from stool samples of inpatients and outpatients at Tirunelveli Medical College for one year. Stool samples were carried on Mannitol salt broth to the laboratory. Strains were grown at 37 ºC in Mannitol Salt broth (MSB) for 48 h. Solid media contained 1.5% (wt/vol) bacteriological agar Fig. 1. Pure cultures were maintained on Mannitol Salt Agar medium. Biochemical Table 1 and molecular characterization was done to confirm the species level.

TABLE 1: STAINING AND BIOCHEMICAL CHARACTERS OF THE ISOLATED CULTURES

Bacteriophage Isolation: Sewage samples from 30 different areas of Tirunelveli were collected as per the standard procedure. Samples were transported at 4 ºC and used within 24 h of collection for further use Table 3 Isolation of Phage was performed through two steps:

(A) Direct Isolation Method: Around 8 ml of the collected water sample was fortified with 2 ml of chloroform, allowed to stand for 2 h to settle solid particles which were later subjected to removal. Water was centrifuged for 7 min at 10,000 rpm. The supernatant collected as cell lysate was stored at 4 °C for future use.

(B) Enrichment Method: In this method, 1 ml of the host bacterium was fortified into 8 ml of Nutrient broth and incubated overnight at 37 °C. After the incubation, the overnight culture was added with 1 ml of cell lysate and incubated at room temperature for overnight to which 2 ml of chloroform was added and centrifuged at 10,000 rpm for 10 min. The supernatant was transferred as the cell lysate and stored at 4 °C for future use. All the lysates were named as IIS and numbered fro 1-135 respectively.

(A) Plaque Assay: The cell lysate obtained from the enrichment method were used for plaque assay. The cell lysate (0.1 ml) was added to the overnight grown cells (0.2 ml) in Nutrient broth and mixed with 2.5 ml of aliquots of soft agar. The mixtures were subsequently overlaid on Nutrient Agar plates and incubated for 48 h at 37 °C. After the incubation period, the plates were characterized by the formation of plaques. A bacteriophage free sterile water with Staphylococcus aureus was employed as a negative control Fig. 2. 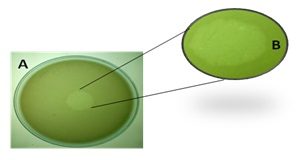 FIG. 3: SPOT ASSAY AGAINST THE ISOLATED STAPHYLOCOCCUS AUREUS. (A) CLEAR PLAQUE (B) ENLARGED VIEW OF PLAQUE

(B) Spot Assay: To reduce labor, time, and media, the spot assay method was carried out. Overnight culture of bacteria was mixed with Soft Agar to which a drop of phage stock solution was added and incubated at 37 °C for 48 h. After the incubation period, the plates were checked for the formation of plaques. Sterile phage free water as lysate with Staphylococcus aureus was maintained as control. The infected area was characterized under four categories viz., clear plaques, turbid plaques, faint plaques, or no plaques 11 Fig. 3.

Concentrating and Purification of the Phage: The clear plaques formed in the plaque assay and spot assay method were subcultured by picking of plaques with a sterile inoculation loop and inoculated in fresh overnight Staphylococcus aureus broth culture and incubated for 24 h at 37 ± 2 °C. After 24 h, the incubated broth was mixed with chloroform (2 ml) and incubated for 4 h at 4 °C. The mixture was centrifuged for 5 min at 10,000 rpm to remove the bacterial cells and cell debris. After the centrifugation, the supernatant solution was stored with an addition of a few drops of chloroform at 4 °C.

RESULTS AND DISCUSSION: To select specifically S. aureus, several preliminary characteristics were carried out according to standard procedures 12. Nearly 100 stool samples were subjected to identification experiment. Based on the culture, Gram staining, and specific biochemical analysis including coagulase, catalase and oxidase tests, cultures from hospital samples were grouped to Staphylococcal genus. Preliminary identification was made by visualizing the color change of mannitol salt media from red to yellow, which is a characteristic strategy of Staphylococcus sp. Later bacterial samples were identified to be Gram-positive, cluster shape, catalase positive with the release of water showing the presence of catalase enzyme which is a characteristic feature of aerobes and facultative aerobes like Staph and also shown the absence of oxidase and presence of coagulase activity.

All bacteria with these characteristics were sorted and transferred to mannitol salt broth for incubation and further screening work. Around 25 out of 100 samples were positively found to harbor Staphylococcus. Twenty samples were further taken for molecular characteristics. The cultures were stored at 4 °C for further works.

The other sugar reduction tests were avoided to limit the time consumption and expenditure. Out of 25 Staphylococcus cultures, 8 were confirmed to be Staphylococcus aureus from the molecular analysis by 16sRNA sequencing. Around fifty years ago, MRSA strains were identified, which exhibited resistance to methicillin antibiotics and β-lactams. MRSA being the reason of limiting the effect of antibiotics and increasing the scenario of fatal STI (Staphylococcal infections), another group of resistant variety has also emerged which is resistant to the oxacillin antibiotic called oxacillin-resistant Staphylococcus aureus (ORSA). However, the percentage of ORSA is outraging MRSA, which is the after effect of alternative usage of this antibiotic to methicillin 13, 14.

The antibiogram assay was carried out not only in the view of identifying MRSA or ORSA but also to sort out S. aureus causing food poison from stool sample harbouring diverse range of other microbial community and the phage which is specific for Staphylococcus aureus not limiting to MRSA, MDR or ORSA as the genetic adaptability of this bacterium is remarkable and is subjected to a wide change 15. The anti-susceptibility results emphasize the need for general isolation of phage to specific phage identification. On examination of the isolated 08 cultures of Staphylococcus aureus against fifteen different antibiotics, PC6704 rendered resistance towards more than 3 antibiotics viz., Methicillin, Oxacillin, Clindamycin, Tetracycline and Erythromycin which suggests the possibility of PC6704 to be an MRSA which was further confirmed by 16s rRNA sequencing as Methicillin-Resistant Staphylococcus aureus (Accession No: KU377336).

This finding is similar to some of the studies done by Kenyatta 14, Iran 16, Eritrea 17. This could be attributed to the continuous adaptability change of bacteria. ATCC strain was found to be sensitive towards all the antibiotics of different generations employed. The data retrieved through susceptibility experiment proves the constant genetic variations of S. aureus for their adaptation. However, the isolated strains were taken further to detect the host-specific phages.

Around 30 sewage samples were collected from different areas of the Tirunelveli city. They all were sorted based on their color from yellow to black even though the colour of the water does not have any access in the presence of phages. From the collected sewage water samples, Staphylococcus aureus-specific phage lysates were prepared as per the procedure mentioned, and the plaque assay was performed by double layer agar method. The lysates (L1-L30) yielded no visible plaques in all the triplicate plates.

Enrichment method was performed to empower the fewer concentration of phages in sewage, which could have been missed by the direct isolation method. Plaque assay and spot assay methods were employed to confirm the presence of phage from the previous steps. As plaque assay method consumes time and labor, spot assay for the detection of phages was employed with the samples harboring high load of phages. From the enriched lysates, the plaque assay was performed using double layer agar method to confirm the phages. Plaque formed were characterized into four clear, turbid, faint with no plaques. The occurrence of clear plaques exemplifies the purity and range of phages. The S8 cell lysate, which showed clear plaque formation was selected and subjected for further purification and concentration. Purification and concentration were carried out by several passages and sorting out plaques according to the clearance and size of formation for obtaining phages from plaques of equal size.

Several passages result in same plaques, which indicates the purity of phages. To confirm the host ranges of S. aureus phage specificity of the particular phage was performed against, ATCC 19814, MRSA and KU377336 & PC6701 – PC6708 S. aureus where Escherichia coli, Pseudomonas sp., Bacillus cereus, H. pylori ATCC 26695 were employed as negative controls. The selected phage exemplifies Host Specificity plaques towards all the test bacterium of Staphylococcus aureus series except PC6706.

CONCLUSION: Information from this research could be useful further to specifically characterize the host level determination and stableness of the purified phages. This would be useful in the diagnosis and targeted therapeutical applications that demand success over antibiotics without side effects limiting the molecular adaptability.

ACKNOWLEDGEMENT: The authors highly acknowledge the support and facilities provided by the Department of Biotechnology, Manonmaniam Sundaranar University, Tirunelveli for the entire research program.

CONFLICT OF INTEREST: Authors report there is no conflict of interest in the present study.