This study describes the effect of Guar gum and chitosan on formulation of mucoadhesive drug delivery system of itraconazole. Mucoadhesive strength, Drug content, Hardness, Friability, Weight variation, Moisture content and accelerated stability studies were performed to study the effect of polymers on prepared mucoadhesive tablets. Results of the present study clarified the potential of guar gum and chitosan in mucoadhesion and control release of itraconazole tablets. Both polymers i.e. Chitosan and guar gum were helpful for controlling the drug release in better way when used in proper combinations. When result of mucoadhesion was checked guar gum gives more mucoadhesive strength to the prepared tablets as compared to chitosan. Accelerated stability studies were performed on prepared formulations, results indicates that the formulations were stable that mince excipients used in the formulations were stable and are not causing major changes in drug release pattern after a period of 6 months. From above mentioned work it can be concluded that combination of Chitosan and guar gum is better and effective approach to have controlled mucoadhesive drug delivery system of Itraconazole.

bioadhesion has been inspired by the development of novel bioadhesive polymers for mucosal delivery 1,2. Bioadhesive, or more precise mucoadhesive drug delivery systems are aimed to adhere to various mucosal tissues 3. The localisation of mucoadhesive delivery systems within a certain GI-segment, ideally where the drug has its absorption window, would lead to a tremendous improvement in the oral bio-availability of these drugs 4.

Gastrointestinal retention depends on many factors such as density of the dosage form, size of the dosage form, fasting and fed condition, nature of the meal taken, sleep, posture, etc. It also depends strongly on a complicated and unpredictable gastric emptying with migrating myoelectric complex motility of the stomach 6. Various delivery systems like floating, swellable, mucoadhesive, high density formulations, etc., have been developed to achieve gastroretention 7.

Itraconazole, being triazole antifungal, is used to contol the prophylaxis of fungal infections in immuno-compromised patients with doses of 100-200 mg administered 2 to 3 times a day. Itraconazole is practically insoluble in water, very slightly soluble in alcohol and freely soluble in dichloromethane 8.

Determination of solubility of Itraconazole: Drug solubility was determined by adding excess amounts of Itraconazole to 0.1M HCl at 37°C ± 0.5°C, respectively. The suspensions formed were equilibrated under continuous agitation for 48 hrs and filter to obtain a clear solution. The absorption of the samples was measured in a UV spectrophotometer (JASCO – V530) at 254 nm and the concentrations in μg/ml were determined. Each sample was determined in triplicate.

Determination of Drug Content: Ten tablets were selected randomly and powdered 9. Accurately weighed powder equivalent to weight of one tablet was stirred using magnetic stirrer in 100 ml phosphate buffer saline pH 1.2 for a period of 2 hours. Sample was analyzed after appropriate dilutions by UV spectrophotometer at 254 nm.

In-Vitro Drug Release Studies: The release rates of Itraconazole mucoadhesive tablets were determined using USP Dissolution Testing Apparatus II (Paddle type). The dissolution test was performed using 900 ml of phosphate buffer pH 1.2, temperature and speed of the apparatus was maintained at 37°c ± 0.50°C and 100 rpm respectively. A 5ml aliquot of dissolution medium was withdrawn from the dissolution apparatus hourly for 8 hrs, and the samples were replaced with fresh dissolution medium. The samples were filtered through Whatman filter paper no. 41. Absorbance of these solutions was measured at 254 nm. Cumulative percentage drug release was calculated using an equation obtained from a standard curve.

Instrument: The apparatus was locally assembled and was a modification of the apparatus applied by Parodi et al., 10.  The device was mainly composed of a two-arm balance 11.  The left arm of the balance was replaced by small copper lamina plate vertically suspended through a wire.  At the same side, a movable platform was maintained in the bottom in order to fix the model mucosal membrane.

Ex vivo mucoadhesion studies: The instrument described above was used with sheep intestinal mucosa as model membrane 12. The mucosal membrane was excised in pH 1.2 phosphate buffer before the bioadhesion evaluation study by removing the underlying connective and adipose tissue, and equilibrated at 37°C± 1°C for 30min. The tablet was lowered on to the mucosa under a constant weight of 5g for a total contact period of 1 min. Bioadhesive strength was assessed in terms of the weight in grams required to detach the tablet from the membrane. 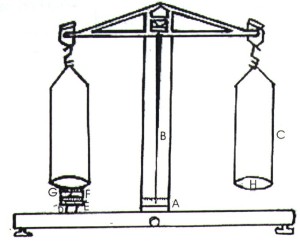 Determination of Solubility: The solubility of Itraconazole in water and 0.1 M HCL at 37°C was found to be 48 ng/ml and 1.3 μg/ml respectively.

Moisture Content: Moisture content of Itraconazole was found to be 3.55% and it is within the limit that Itraconazole should contain less than 5% of moisture.

Determination of Drug Content: The drug contents of Itraconazole tablets were depicted in Table 2. The results obtained are in accordance with the specifications given in official pharmacopoeia that the Itraconazole powder should contains 98.5% to 102.5% of Itraconazole.

Evaluation of Itraconazole Mucoadhesive Tablets: Tablets were evaluated for Hardness, Friability, Weight Variationand Thickness. Result suggests that the parameters are within the specified range (Table 2).

The mechanism of drug release from guar gum is due to water penetration, gelatinization and diffusion 15. From the in-vitro drug release study it can be noted that both the polymers is having ability to control the drug release. The drug release is not hundred percent in present study it is due to poor solubility of Itraconazole, but still the effect of polymers on drug release can be easily noted from the obtained results (Table 2 and Fig. 2). 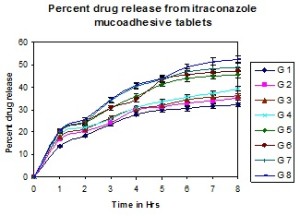 Stability Study: At the end of the testing period, tablets were observed for changes in physical appearance, analyzed for drug content, Mucoadhesive strength and subjected to in vitro drug release studies. No visible changes in the appearance of the matrix tablets were observed and a significant change was not seen in the drug content and drug release at the end of the storage period.