AN INVESTIGATION FOR PRESCRIPTION DRUGS IN AN ARENA OF VIRAL DISEASES

AN INVESTIGATION FOR PRESCRIPTION DRUGS IN AN ARENA OF VIRAL DISEASES

ABSTRACT: WHO’s global health expenditure data base explores internationally comparable data on health spending in all WHO Member States. The report incorporates data analytics for various diseases, health expenditure and death toll etc., globally. Viral diseases have always been a burning issue for morbidity and mortality, worldwide. Viral diseases such as Chickenpox, Malaria, Cholera, Bronchitis, Tuberculosis, Meningitis, HIV, Dengue, and Chikungunya etc. have been challenging the medical practitioners, pharmacists, researchers and consumers since decades. Major out of pocket expenditure goes towards the medication of these diseases. For the medication of viral diseases, numbers of pharmaceutical companies are working in the segment of prescription drugs with focusing on different chemical moieties having antiviral activity. The rising expenditures for the prescription of these drugs are a major problem for public and private payers in many countries. In preview of this fact, an investigation is carried out for prescription drugs on the available parameters of price, chemical moieties and pharmaceutical companies in the domain of viral diseases- Chickenpox, Malaria, Bronchitis, and Tuberculosis diseases. Various branded and generic drugs have been studied and analysed for price variability.

INTRODUCTION: The impact of the viral disease caused by viruses such as Ebola 1, Poliomyelitis 2, MERS‐CoV 3 etc. can be estimated by various world health statistics, published by WHO. One of the report states, in 2015, infection with the hepatitis B virus (HBV) contributed to an estimated 887000 deaths worldwide. Most of these deaths result from the chronic sequelae of HBV infection such as cirrhosis (52%) and liver cancer (38%) 4. In other report, burden of morbidity and mortality associated with infectious diseases falls most heavily on people in developing countries, and particularly on infants and children.

In 2015, there were an estimated 429000 malaria deaths globally, with the heaviest burden borne by the WHO African Region – where an estimated 92% of all deaths occurred – and by children under 5 years of age, who accounted for more than 70% of all deaths 5. Tuberculosis (TB) remains a major global health problem, despite being a treatable and curable disease.

Most recent WHO report states that annual death toll due to chronic respiratory diseases; diarrhoeal diseases and malaria are 1.4 million deaths, 846000 deaths and 259000 deaths respectively 9. This data poses challenge to the Governments word wide to take necessary steps for reducing death toll through mass education towards personal hygiene, better medical facilities, cheap pharmaceuticals and drugs etc. The total pharmaceutical bill across European Union countries in 2008 is estimated to have reached more than EUR 180 billion, accounting for around 18% of total health spending on average (unweighted) across EU countries. Over the past ten years, average spending per capita on pharmaceuticals has risen by almost 50% in real terms 10.

Total nominal US health care spending increased 4.3 percent and reached $3.3 trillion in 2016. Per capita spending on health care increased by $354, reaching $10,348. The share of gross domestic product devoted to health care spending was 17.9 percent in 2016, up from 17.7 percent in 2015 11. Medicare’s spending on prescription pharma-ceuticals also has risen: between 2004 and 2014, the program’s share of US drug expenditures increased from 2% of $193 billion to 29% percent of $298 billion. Prices for many specialty drugs are higher in the United States than other developed countries, and about 1 in 4 people in the United States who take prescription drugs report difficulty affording those 12.

It is seen that in 2014 at all-India level as well as state level highest percentage of total expenditure is made towards medicines. At all-India level around 72% in rural sector and 68% in urban sector of the total medical expenditure was done for purchasing ‘medicine’. Second in this list for both for rural (15%) and urban sector (16%) was ‘Diagnostic test and other expenditure’, followed by ‘doctor’s fee 13. In 2014, such payments were estimated to account for 62% of total health expenditure (60.6 billion United States dollars, US$, out of US$ 97.1 billion) 14. In fact, public expenditure on health in India has remained stagnant at 1% of gross domestic product, far below other emerging BRICS (Brazil, the Russian Federation, India, China and South Africa) economies and lower even than in the neighbouring countries of Nepal and Sri Lanka 14.

The said analytics reflect that the pharmaceuticals cost is gradually increasing in almost all nations. Major contribution of pharmaceuticals comes from prescription drugs. The rising price of the drugs directly affects the consumers. The consumers have the choices of purchasing expensive branded drugs or affordable generic drugs. The purchasing behaviour of the consumers depends mainly on prescription and purchasing capacity for the branded drugs while in case of generic drugs, it depends on consumer’s awareness and availability.

Generic drugs are those drugs which are identical to branded drugs in dosage, safety, and strength method of administration, quality and performance and intended in use. Brand name drugs are sold by pharmaceutical companies under a trademark-protected name. These medications can only be produced and sold by the manufacturer that holds the patented and can be produced and sold by manufacturer that has obtained approval 15. In India, consumers were not aware that such kinds of drugs are also available in market 16. Indian Government began encouraging the production of drugs by Indian companies in the early 1960’s and with the Patent Act in 1970.

Present case study was carried out to address the issues related to antiviral drugs in term of price variation, prescription drugs, chemical moieties and Pharmaceutical companies active in the segment of Chick pox, Malaria, Bronchitis and Tuberculosis. Antiviral drugs are those which specifically used for treatment of viral infection rather the bacterial ones. It effects against wide range of viruses. Not like antibiotics they do not destroy pathogen, instead of that inhibit their development. Eight compounds which reported antiviral activity in literature have been selected for present case study. Two compounds are found active for Chicken pox, two compounds for Malaria, three compounds for Bronchitis and one compound is found active for Tuberculosis. Based on these compounds, eight generic drugs and corresponding thirteen branded drugs of various Pharmaceutical companies have been selected through random sampling.

On literature survey, few potent compounds which are found to have antiviral activity are listed in Table 1.

TABLE 1: LIST OF ANTIVIRAL DRUGS THAT ARE COMMONLY USED

Data Collection for Generic and Branded Drugs: Based on literature review, 8 compounds- Acyclovir, Loratadine, Chloroquine, Mefloquine, Amoxicillin, Azithromycin, Cefixime and Rifampin are selected which covers the four common diseases. Accordingly, generic drugs and branded drugs are collected which are available for respective compounds. Table 2 shows that for Chicken pox, two generic drugs Acylovir and Loratadine which is manufactured by Cipla and Cadila Pharma with brand name Acivir-800 DT and Lorfast Met Lab respectively, are available. For Malaria, two generic drugs Chloroquine and Mefloquine which is manufactured by IPCA Lab Pvt. Ltd. and Mankind Pharma Pvt. Ltd., with brand Lariago DS and Match respectively are available.

Fig.1 shows the variation in price/mg for different branded drugs of generic drug Azithromycin for disease Bronchitis. The graph represents variation in price for four branded drugs, Azibact, Azee-500, Rulide and Azix-500. The highest prices came out to be of Azix-500 which is Rs. 1.40 for 10 mg. and manufactured by Sentix Pharma Ltd. The lowest price came out to be of Rulide which is Rs. 0.80 for 10 mg. and is manufactured by Sanofi India Pharma Ltd.

Fig. 2 shows the variation in price/mg. for different branded drugs of generic drug Cefixine for disease Bronchitis. The graph represents variation in price for three branded drugs, Cefiwok DT, Taxim O 200 and Cefolac-200. The highest price came out to be of Taxim O 200 with cost Rs. 6.30 per 10 mg. and is manufactured by Alkem Labortories Ltd. The lowest price came out to be of Cefiwok DT and Cefolac-200 with cost Rs. 4.50 per 10mg. each and is manufactured by Ranbaxy Labs and Macleods Pharma Pvt. Ltd., respectively.

Fig. 4 gives information of variation in average price/mg of medication used for four antiviral diseases. The graph represents that out of four antiviral diseases, average treatment cost of Chicken pox is the highest followed by Tuberculosis, Bronchitis and Malaria. The average price per 10 mg. for Chicken pox and Malaria are found Rs. 13.0 and Rs. 1.80, respectively. 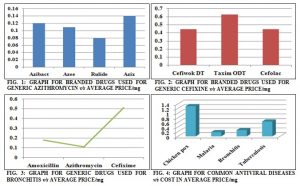 Table 2 states that out of manufacturer for generic and branded drugs, Pharmaceutical company- Cipla Ltd is found to have active role in the area of Chicken pox, Bronchitis and Tuberculosis with generic drug of Acylovir, Amoxicillin, Azithro-mycin and Rifampian and corresponding branded drugs Acivir-800 DT, Novamox-500, Azee-500 and Rixmin-550. Another pharmaceutical company- IPCA Lab Pvt. Ltd., is active in an area of Malaria and Bronchitis with generic drug of Chloroquine and Azithromycin and corresponding branded drugs Lariago DS and Azibact.

CONCLUSION: Our data analysis and interpretation shows that lots of price variation is found for various branded drugs in same segment of generic drugs. The average medication cost of Chicken pox is highest followed by Malaria, Bronchitis and Tuberculosis. The outcome of this study shows that Azix and Taxim ODT are the most costly branded drugs for generic compounds Azithromycin and Cefixine respectively.

Cefixime is the highest priced generic drug among the available generic drugs in Bronchitis. Chicken pox demands most expensive medication among other diseases and Pharmaceutical company- Cipla Ltd., is found active in maximum number of antiviral diseases. Any single chemical moiety is not found dominating the antiviral drugs category.

ACKNOWLEDGEMENT: The authors are very grateful to the medical practitioners, druggist, chemist and medical representatives from cities Barnala, Bathinda, Phagwara and Jalandhar of state- Punjab, India, for sharing theirs valuable knowledge and expertise related to drugs.