Categories Menu
Home » AN INVESTIGATION OF ACOUSTIC, THERMODYNAMIC AND ANTIMICROBIAL ACTIVITY STUDY OF A DRUG IN A PEPTIDE

AN INVESTIGATION OF ACOUSTIC, THERMODYNAMIC AND ANTIMICROBIAL ACTIVITY STUDY OF A DRUG IN A PEPTIDE

AN INVESTIGATION OF ACOUSTIC, THERMODYNAMIC AND ANTIMICROBIAL ACTIVITY STUDY OF A DRUG IN A PEPTIDE

ABSTRACT: Peptides are recognized for being highly selective efficacious and at the same time, relatively safe and well tolerated. Consequently, there is an increased interest in peptides, in pharmaceutical research and development (R&D) and approximately 140 peptide therapeutics are currently being evaluated in clinical trials. Ultrasonic is an area of intense scientific and technological research, science and technology of ultrasonics are widely used in the recent years for industrial and medical applications. Ultrasonic investigation in non- aqueous solutions of electrolytes and non- electrolytes with amino acids provide useful information in understanding the behaviour of liquid/solution system. In the present work, the ultrasonic velocity of a peptide with drug in formamide have been measured at various concentrations and at different temperatures. Using the measured value the thermodynamic parameters and acoustical parameters are calculated. These parameters have been utilized to study the interionic and intermolecular interactions existing in the system. The results arrived from ultrasonic methods have been corroborated with antimicrobial study.

INTRODUCTION: Proteins and peptides are ubiquitous in every cell and thus are vital for various biological functions. In recent years, there is an extensive growth in the development of various biological and large molecules like proteins and peptides 1. More than seven thousand naturally occurring peptides have been identified and these often have crucial roles in human physiology, including actions as hormones, neurotransmitters, growth factors, ion channel ligands or anti-infective 2 - 5.

During the past decade, peptides have gained a wide range of applications in medicine, biotechnology and therapeutic peptide research is also currently experiencing a renaissance for commercial reasons 6. One of these systems is peptide-mediated drug delivery which has been extensively applied to a wide range of cargo molecules 7.

Cell penetrating peptides (CPPs) provides a promising solution to the problems commonly related to the drug delivery of conventional cancer chemotherapeutics as well as oligonucleotide based treatments. Many sulpha drugs like sulphadiazine, sulphamethoxazole, sulphamerazine possess SO2NH moiety as an important toxophoric function 8. Sulfadiazine is a useful antibacterial drug with a typical sulphonamide structure.

Formamide is a constituent of cryo protectant verification mixtures used for cryopreservation of tissues and organs. Formamide is also used as an RNA stabilizer in gel electrophoresis, it is used for stabilizing (single) strands of denatured DNA. Formamide is used to prepare primary amines directly from ketones. The ultrasonic measurements are useful in determining number of acoustical parameters. Using the measured values of ultrasonic velocity, viscosity and density, the acoustical parameters such as adiabatic compressibility, specific acoustic impedance and intermolecular free length have been calculated. Solution of Glycyl-L- glycine + Sulfadiazine in polar solvent is taken for present investigation. This study has been carried out at different temperatures concentrations. The antimicrobial activity have been analysed the solution Glycyl-L- glycine + Sulfadiazine + formamide.

Ultrasonic velocity measurement: Ultrasonic velocity was measured using digital ultrasonic interferometer of fixed frequency 2 MHz with on accuracy of ± 0.2 m/s (Model F-81 Mittal enterprises, New Delhi). The measuring cell of the interferometer is a specially designed double walled vessel with provision for maintaining temperature constant. A digital constant temperature bath operating in the temperature range 0 °C to 90 °C with an accuracy of ± 0.1 °C has been used to circulate water through the outer jacket of double walled measuring cell containing the experimental liquid/solution.

Density measurement: The density of the peptide + drug solutions are measured using DMA 4100 Anton Paar digital densitometer with an accuracy of ± 0.0001 gm/cc.

Viscosity measurement: The viscosities of the solutions are measured using a specially designed Cannon Fenske viscometer (±0.1 % error) with the experimental solution is immersed in a temperature controlled water bath. The time of flow was measured using a stop watch with an accuracy of 0.1 sec. The viscosity was determined using the relation, Ƞ1 = [ρ1t1/ρ2t2] × Ƞ2

Computation: Using the measured data, the following transport and acoustical parameters have been computed using the standard relations,

Free volume is one of the significant factors in explaining the variations in the physico-chemical properties of liquids, solutions and liquid mixtures. The free space and its dependent properties have close connection with molecular structure.

Intermolecular Free Length: The decrease in intermolecular free length with increase of concentration in solution indicates that there are significant interactions between the peptide and drug solution, i.e. the distance covered by the two neighboring molecules is reduced.  Thus the intermolecular distance decreases with concentration. The decrease in free length may due to the gain of dipolar association and making up of hydrogen bonds in the molecules of the solutions. 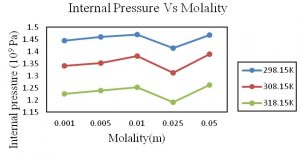 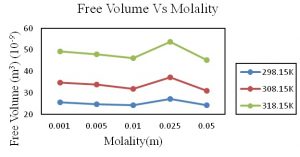 Preparation of microbial inoculums: The young microbial inoculums was prepared and used during the research period. The nutrient broth (NB) and potato dextrose broth (PDB) were prepared and poured into several tubes. Then these tubes were sterilized. The pure microbial cultures inoculated in the tubes by using inoculation loops. After that these tubes were incubated at 37 °C for 24-28 hrs and 28 °C for 48-72 hours for bacteria and fungi respectively. After incubation the cultures were used for the experiments.

Preparation of nutrient agar medium: The ingredients were weighed and taken in a conical flask contains 1000 ml distilled water. Then pH of the medium was adjusted to 6.8 using a pH meter by the addition of either acid (or) alkali. The flask was sterilized in an autoclave at 121oC for 15 lbs pressure for 15 minutes and allowed to cool.

Preparation of potato dextrose agar medium: The potato tubers were peeled and weighed for about 200 g. The tubers were chopped into small pieces with the help of sterile knife. The chopped potatoes were transferred into a conical flask containing about 100 ml of distilled water. The content was boiled for 20 mins. The supernatant were decanted and filtered by muslin cloth and the filtrate was collected. Dextrose agar were transferred into the extract and shacked to dissolve the ingredients. The medium was made up to 1litre by addition of distilled water. The pH of the medium was adjusted to 5.6 by using 1N hydrochloric acid or sodium hydroxide drop wise. Finally, the medium was poured into two conical flasks, cotton plugged and sterilized in pressure cooker for 20 minutes.

Screening of antibacterial activity: The antibacterial activities of the (GG+ SDZ) were tested against the selected bacterial strains. The petriplates were washed and placed in an autoclave for sterilization. After sterilization, nutrient agar medium was poured into each sterile petriplate and allowed to solidify in a laminar air flow chamber. After solidification, using a sterile cotton swab, fresh bacterial culture with known population count was spread over the plate by spread plate technique. One well of 5 mm size made into the agar plates with the help of sterile corkborer, the wells were loaded with 200 μl of extracts (GG+SDZ). All the plates were incubated at 37 oC for 24 hours. After incubation, the plates were observed for formation of clear inhibition zone around the well indicated the presence of antibacterial activity. The zone of inhibition was calculated by measuring the diameters of the inhibition zone around the well.

Screening of antifungal activity: In the freshly prepared and sterilized potato dextrose agar medium, a pinch amount of streptomycin was added to prevent bacterial contamination and mixed well. The medium was poured into each petriplate and allowed to solidify. The test fungal cultures were evenly spread over the appropriate media by using sterile cotton swab. Then wells 5mm was made in the medium by using sterile cork borer, 200 μl of the GG+SDZ extracts were transferred into separate wells. Then these plates were incubated at 28 °C for 48-72 hours. After incubation period the results were observed and measured the diameter of inhibitor zone around the each well.

Antibiotic sensitivity test on microbes (Positive control): The antibiotic sensitivity test was analysed using standard antibiotics (Streptomycin) (10 μg/μl) for bacteria and Fluconazole (10 μg/μl) for fungi. The sterilized nutrient agar and PDA medium were poured into each sterile petriplates and allowed to solidify. By using a sterile cotton swab, a fresh bacterial and fungal culture was spread over the plates by following spread plate technique. Then the selected standard antibiotics were placed on the bacterial and fungal culture plates. Then, the plates were incubated for 24 hours at 37 oC for bacteria and 28 oC for 48 – 72 hours for fungi. After the incubation period, the results were observed and the diameter of the inhibition zone was measured around the wells.

Antimicrobial effects of solvents (Negative control): The antimicrobial activity of FMA were tested against the selected bacterial and fungal strains. The sterilized nutrient agar medium and PDA medium was poured into each sterile petriplates and allowed to solidify. By using a sterile cotton swab, a fresh bacterial and fungal culture was spread over the plates by following spread plate technique. 200 µl of FMA were loaded in to separated wells. The plates were incubated for 24 hours at 37 oC for bacteria and 28 oC for 48 - 72 hours for fungi. After the incubation period, the results were observed and the diameter of the inhibition zone was measured around the wells.

The antifungal activity of Glycyl-L-glycine + sulfadiazine showed maximum zone of inhibition against  Aspergillus niger (13 mm), the formamide showed absence of zone of against Aspergillus niger and the Flucozole (standard) antibiotic showed zone of inhibition against Aspergillus niger (9 mm). An attempt is made to corroborate the behavior of the samples with antifungal and antimicrobial activity. The biological applications of the samples are revealed in this study 11 as the solution of Glycyl-L-glycine + formamide + sulfadiazine may act as a disinfectant.

CONCLUSION: The peptide and protein based pharmaceuticals thus are rapidly becoming very important class of therapeutic agents. The peptides and proteins based drugs effectively treats various diseases and life-threatening conditions. The improvement in therapies and cure is definite by increasing the alteration in the properties of peptides and proteins. Sulfonamides also known as sulfa drugs, represent a kind of typical antibiotics and have been widely used in human and vertinary medicine to treat and prevent infections of bacterial diseases. Sulfadiazine is a rapidly absorbed and readily excreted sulfonamide antibacterial agent used commonly in triple sulfa preparations. Sulphadiazine is a sulfonamide antibiotic. It is rapidly absorbed from the Gastrointestinal tract and widely distributed in the body. Glycyl-L-glycine has also been reported to be helpful in solubilizing recombinant proteins in Escherichia coli.

An understanding of the structure of formamide is of some importance because formamide is the simplest amide containing an N-C-O configuration. The (N-C-O) peptide linkage is dependent on the structure flexibility of the molecule involved and is of importance in the synthesis of protein. The N-C bond distance in formamide is also of some interest because of its partial double bond character. This behavior of the solutes in the solvent reveals ion-dipolar group interaction between the ions of the sulfadiazine and non-polar parts of peptides results in the reduction of internal pressure. The above results are confirmed by the analysis of acoustical parameters and antimicrobial activity.