Categories Menu
Home » AN INVESTIGATION OF THE DNA BINDING PROPERTIES OF Mn2+, Co2+ AND Ni2+ COMPLEXES WITH 2-AMINOBENZONITRILE AND OCTANOATE ION AS LIGANDS

AN INVESTIGATION OF THE DNA BINDING PROPERTIES OF Mn2+, Co2+ AND Ni2+ COMPLEXES WITH 2-AMINOBENZONITRILE AND OCTANOATE ION AS LIGANDS

AN INVESTIGATION OF THE DNA BINDING PROPERTIES OF Mn2+, Co2+ AND Ni2+ COMPLEXES WITH 2-AMINOBENZONITRILE AND OCTANOATE ION AS LIGANDS

INTRODUCTION: In recent years, binding studies of transition metal complexes have become very important in the expansion of DNA molecule probes and chemotherapeutics 1. DNA is the pharmacological target of many of the drugs that are at present in clinical use or advanced clinical trials. Targeting DNA to control cell functions by modulating transcription or by intrusive with imitation seems logical, instinctively appealing, and conceptually straightforward. Small ligand molecules bound to DNA artificially alter and/or inhibit the functioning of DNA.

These small ligand molecules act as a drug when alteration or inhibition of DNA function is required to cure or control a disease 2. The study of interaction of drug with DNA is very thrilling and important not only for understanding the mechanism of interaction but also for the design of new drugs. The studies have shown that metal complexes can interact with DNA in different binding fashions and exhibit effective nuclease activities 3, 4.

On the other hand, among the aminobenzonitriles, 2-aminobenzonitrile (ABN) is used for the induction of nitrilase activity in arthrobacter, radioprotective agent and starting materials for the synthesis of biologically active compounds 5-8. 2-aminobenzonitrile is one of the organic ligands in coordination chemistry which can coordinate to the metal ion through different modes viz., monodentate, bidentate or bridging.

Materials: 2-aminobenzonitrile, sodium octanoate, and manganese nitrate, cobalt nitrate and nickel nitrate were purchased from Alfa Aaser Company and used as such. The organic solvents DMSO, DMF, methanol, ethanol were of AnalaR grade and used as such without further purification.

Synthesis of Mn(II) complex: 2-aminobenzonitrile 0.91g (7.38 mmol) in ̴ 10 ml methanol and sodium octanoate 1.33g (8.01 mmol) in  ̴ 10 ml ethanol were added to the manganese nitrate 1.00 g (3.64mmol) in ̴ 10 ml methanol followed by microwave irradiation for a few seconds after each addition by using IFB 25 BG-1S model microwave oven. The consequential precipitate was filtered off, washed with 1:1 ethanol: water mixture and desiccated under vacuum. A pale yellow colored complex was obtained with 64.76% yield.

Synthesis of Co(II) complex: Sodium octanoate 1.14g (6.91 mmol) in ̴ 10 ml ethanol and 2-aminobenzonitrile 0.83g (6.93 mmol) in  ̴ 10 ml methanol were added to the cobalt nitrate 1.00g (3.64 mmol) in ̴ 10 ml methanol followed by microwave irradiation for a few seconds after each addition by using IFB 25 BG-1S model microwave oven. The consequential precipitate was filtered off, washed with 1:1 ethanol: water mixture and desiccated under vacuum. A pink colored complex was obtained with a 63.77% yield.

Synthesis of Ni(II) Complex: 1.00 g (3.43 mmol) cobalt nitrate in ̴ 10 ml methanol and 2-aminobenzonitrile 0.81g (6.88 mmol) in ̴ 10 ml methanol were added to the Sodium octanoate 1.14g (6.90 mmol) in  ̴ 10 ml ethanol followed by microwave irradiation for a few seconds after each addition by using IFB 25 BG-1S model microwave oven. The consequential precipitate was filtered off, washed with 1:1 ethanol: water mixture and desiccated under vacuum. A pale green colored complex was obtained with a 71.65% yield.

DNA Binding Studies: The DNA binding experiments involving the interaction of the Cr(III) complex and the ligands with calf thymus CT-DNA were conducted in Tris buffer containing HCl (0.01 M) adjusted to pH 7.2 with hydrochloric acid. The CT-DNA was dissolved in Tris-HCl buffer and was dialyzed against the same buffer overnight. Solutions of CT-DNA gave the ratios of UV absorbance at 260 and 280 nm above 1.8, demonstrating that the DNA was adequately free of protein. DNA concentration per nucleotide was determined by absorption spectroscopy using the molar absorption coefficient 6600 dm3mol-1cm-1 at 260 nm. The stock solutions were stored at 4°C and used within 4 days. For fluorescence-quenching experiments, DNA was pre-treated with ethidium bromide (EtBr) for 30 min. The ABN, Mn2+, Co2+ and Ni2+ complexes then added to this mixture respectively and their effect on the emission intensity was measured. Samples were excited at 450 nm and emission was observed between 500 nm and 800 nm 10.

Antioxidant Activity: Evaluation of antioxidant activity stock solution (1 mg/ml) was diluted to final concentrations of 10-500 µg/ml. Ethanolic DPPH solution (1 ml, 0.3 mmol) was added to the sample solutions in DMSO (3 ml) at different concentrations (10-500 µg/ml) 11. The mixture was shaken energetically and acceptable to stand at room temperature for 30 min. The absorbance was then measured at 517 nm in a UV-Vis spectrophotometer. The lower absorbance of the reaction mixture indicates higher free radical scavenging activity. Ethanol was used as the solvent and ascorbic acid as the standard. The DPPH radical scavenging activity is designed by the following equation:

DNA Binding Properties: The binding of 2-aminobenzonitrile, Mn2+, Co2+ and Ni2+ complexes to CT-DNA can be studied by competitive binding experiments. Ethidium bromide (EB) is known to show fluorescence when bound to DNA, due to its strong intercalation between the adjacent DNA base pair. The fluorescent light is quenched by the addition of a second molecule 12, 13. The quenching extent of fluorescence of ethidium bromide binding to DNA is used to determine the extent of binding between the second molecule and DNA. The addition of the complex to DNA pretreated with ethidium bromide causes an appreciable reduction in the emission intensity, indicating the replacement of the ethidium bromide fluorophore by the complex results in a decrease of the binding constant of the ethidium to the DNA Fig. 1-4.

According to the classical Stern-Volmer equation: Io/I = 1 + Ksvr, where Io and I are the fluorescence intensities in the absence and the presence of complex respectively. Ksv is a linear Stern–Volmer quenching constant, r is the ratio of the total concentration of complex to that of DNA. The quenching plots illustrate that the quenching of ethidium bromide bound to DNA by the complex are in good agreement with the linear Stern-Volmer equation, which also indicates that the complex binds to DNA. In the plot of I0/I versus CComplex/ CDNA, K is given by the ratio of the slope to intercept. 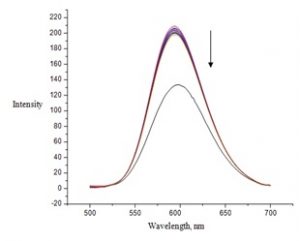 FIG. 1: EMISSION SPECTRUM OF EtBr BOUND TO DNA IN THE PRESENCE OF 2-AMINOBENZO-NITRILE. ARROWS INDICATE THE INTENSITY CHANGES UPON INCREASING CONCENTRATION OF THE 2-AMINOBENZONITRILE 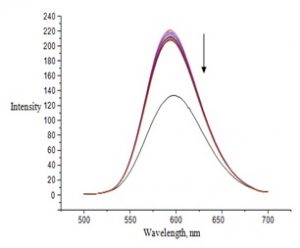 FIG. 2: EMISSION SPECTRUM OF EtBr BOUND TO DNA IN THE PRESENCE OF Mn2+ COMPLEX. ARROWS INDICATE THE INTENSITY CHANGES UPON INCREASING CONCENTRATION OF THE COMPLEX 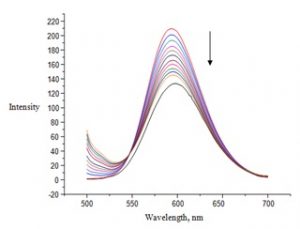 FIG. 3: EMISSION SPECTRUM OF EtBr BOUND TO DNA IN THE PRESENCE OF Co2+ COMPLEX. ARROWS INDICATE THE INTENSITY CHANGES UPON INCREASING CONCENTRATION OF THE COMPLEX 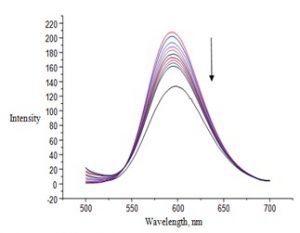 FIG. 4: EMISSION SPECTRUM OF EtBr BOUND TO DNA IN THE PRESENCE OF Ni2+ COMPLEX. ARROWS INDICATE THE INTENSITY CHANGES UPON INCREASING CONCENTRATION OF THE COMPLEX
TABLE 1: DNA-BINDING CONSTANT (Kb) OF LIGAND AND ITS COMPLEXESThe Kb values for Mn2+, Co2+ and Ni2+ complexes and ligand with DNA were 2.75 × 104 M−1, 3.08 × 104 M−1, 3.80 × 104 M−1 and 1.96 × 104 M−1, respectively. Furthermore, Ni2+ complex is complex strongly binds to DNA compared to other complexes and the ligand. The binding constant (Kb) values indicate that interaction of the complexes with DNA is intercalative mode 14.

The scavenging reaction between (DPPH) and an antioxidant (R-H) can be written as:

Antioxidants react with DPPH, a stable free radical that is reduced and as a result, the absorbance decreases due to the formation of the DPPH-H from the DPPH radical. The degree of discoloration indicates the scavenging potential of the antioxidant compounds or samples in terms of hydrogen donating ability 17. The graph was plotted with the percentage of scavenging effects on the y-axis and concentration (µg/ml) on the x-axis. The scavenging ability of the 2-aminobenzonitrile (ABN) with Mn2+, Co2+, and Ni2+ complexes were compared with ascorbic acid as standard. The complexes showed enhance activity as a radical scavenger compared with ascorbic acid, these results were in good agreement with previous metal complexes studies where the ligand has the antioxidant activity and it is expected that the metal moiety will increase its activity 18-20. 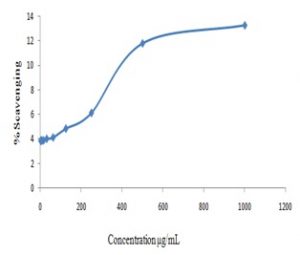 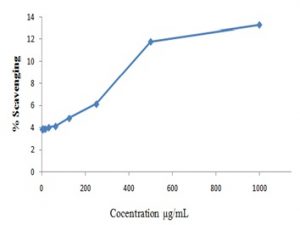 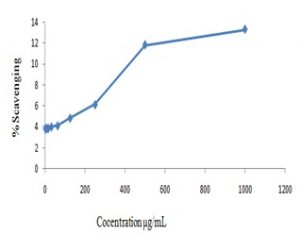 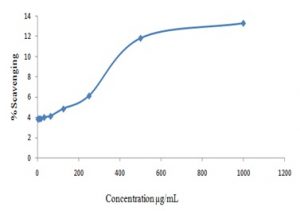 TABLE 2: ANTIOXIDANT ACTIVITY OF LIGANDS AND THEIR COMPLEXES

The metal complexes have significant antioxidant activity as compared to the free ligands. The effectiveness of the DNA binding property of the complexes is being confirmed by means of change in the intensity of emission in the case of emission spectral studies.

ACKNOWLEDGEMENT: The authors thank the Management and the Principal of Thanthai Hans Roever College (Autonomous), Roever College of Engineering and Technology, Perambalur, Tamil Nadu, India for permitting them to carry out this work. The authors are also thankful to the Heads, St. Josephs College, Tiruchirappalli, Director, STIC, Cochin for providing the data.