Nalbari district is situated in between 26°N and 27oN latitude and 92oE and 97oE longitude. It lies between Kamrup and Barpeta district of lower Assam. Nalbari has a population of 1138184 (2001 census). An ethnobotanical Survey was conducted in 2010 in selected villages to explore the medicinal plant used by the villagers to cure Diabetes. This villages are inhabited by Boros, Koch, Muslim communities. The indigenous knowledge of local traditional healers and native plants used by the villagers to cure Diabetes were collected using a questionnaire and personal interviews. Total 30 villagers in the age group of 30-68 years were interviewed out of which 3 were local healers. The investigation reveals 35 species of plants belonging to 28 families which are used to cure Diabetes. It is found that the whole plant is used for curing the ailment but mostly fresh juice, powder, fresh leaves, paste or decoction in water remains the most preferred method of preparation. Most plants are very effective remedy when used in a combination or singly. The present study throws light on the traditional knowledge of the villagers regarding medicinal plant which can be used against Diabetes which is largely unexplored.

INTRODUCTION:The North east region of India comprising of the states of Arunachal Pradesh, Assam, Meghalaya, Manipur, Tripura, Mizoram, Nagaland and Sikkim can be physiologically categorised into the Eastern Himalayas, Northeast hills and the Brahmaputra and Barak Valley plains.

At the confluence of the Indo Malayan, Indo Chinese and Indian biogeographical realms, the northeast region is unique in providing a profusion of habitats, which features diverse biota with a high level of endemism. The region is also abode of approximately 225 tribes in India out of 450 in the country, the culture and customs of which have an important role in understanding biodiversity conservation and management issues 1.

The state of Assam with an area of 78,520 sq. km, located in the North Eastern region of India has rich wealth of flora and fauna due to its characteristic geographical location and varied climate.

According to 1991 census, the total population of the state is 22,414,322 out of which 11.09 per cent are urban and 88.89 per cent are rural inhabitants. The state of Assam is divided into 23 districts 2. This is a mixing ground of more than 100 tribes and sub-tribes of both hills and plains, having different ethnic and linguistic background. These tribal groups have accumulated a treasure of traditional knowledge about many uses and benefits of locally available plants. The diverse flora in this region provides a rich source of medicinal plants which is being used by them in their folk medicine.

The North-Eastern regions of India is one of the most diverse regions in the world, with more than 150 tribes speaking as many languages, this region is a melting point of variegated cultural mosaic of people & races, an ethnic tapestry of many hues & shades. The folk culture is still vital in this region 3. The Schedule Castes of the state are 16 in number while there are 23 Schedule Tribes in Assam according to Census 1991. The profile of the Population constitutes a combination of various tribes and other similar ethnic groups. Located in different hilly regions as well as plain lands, the people of Assam are known to possess various cultural customs that dates back to the historic times of India.

The entire population of Assam is divided into many categories. The tribal communities hold a major portion of Assam’s total population. Found in various parts of the state the prime tribes of Assam includes Garos, Hmars, Bodo, Mishings, Kacharies, Dimasa, Khasis. The non tribals live in and around the region of Barak hills and Brahmaputra River.

Nalbari district is situated in between Kamrup and Barpeta district. The northern side is bounded by the Indo Bhutan international boundary and the southern side by the River Brahmaputra. The Darrang and the Kamrup district falls in the east and Barpeta district in west. The district covers a area of 2257 sq km consisting of 1 civil sub divisions, 11 revenue circles, 12 community development blocks,110 gaon panchayats covering 827 villages. The population of the district is 1138184 according to 2001 census out of which 1100706 lives in rural areas and 27478 lives in urban areas. Thus nearly 97.59% of the population live in villages. The villages were selected on the basis of economic backwardness, dependence on medicinal plants and lack of medical facilities.

Diabetes mellitus is a group of metabolic disorder with one common manifestation hyperglycemia caused by inherited or acquired deficiency in production of insulin by the pancreas resulting from defective insulin secretion, resistance to insulin action or both 4. Type 2 Diabetes usually occurs in obese individuals and is associated with hypertension and dyslipidemia. Thus the treatment aims to reduce insulin resistance and to stimulate insulin secretion.

Diabetes mellitus has been known since ages and the sweetness of diabetic urine has been mentioned in Ayurveda and Susruta. Its pharmacotherapy however is over 80 years old. The word Diabetes was coined by the Greek physician Aeretaeus in the first century AD. In the 17th century, Willis observed that the urine of diabetics is sweet. The presence of sugar in the urine of diabetics was demonstrated by Dobson in 1755 5. Charak another physician was also aware of this disease.

Herbal medicines have been used for the treatment of diabetic patients since long  and they are currently accepted as an alternative therapy for diabetic treatment. However in the indigenous Indian system of medicine good number of plants was mentioned for the cure of diabetes and some of them have been experimentally evaluated and active principle were isolated. WHO (1980) has also recommended the evaluation of the effectiveness of plants in conditions where there are no safe modern drugs. The ethnobotanical information reports state that about 800 plants may possess antidiabetic potential.

Recently the medicinal values of various plants extracts have been studied by many scientists in the field of diabetic research.(Diabetes information hub).Diabetes is associated with long term damage such as malfunction of eyes, kidneys, nerves, heart and blood vessels 6. It is associated with health complications including renal failure with risk of foot ulcers, including sexual dysfunction, heart disease, stroke and blindness. Different types of diabetes have been identified and categorized as Type I Diabetes, Type II Diabetes and Gestational Diabetes.

Plants are the basis of life on earth and are central to people livelihoods. Tribal people are the ecosystem people who live in harmony with the nature and maintain a close link between man and environment. Indian subcontinent is being inhabited by over 53.8 million tribal people in 5000 forest dominated villages of tribal community and comprising 15% of the total geographical area of India, representing one of the greatest emporia of ethno-botanical wealth. The Northeastern states of India that comprises of eight sister States Arunachal Pradesh, Assam, Manipur, Meghalaya, Mizoram, Nagaland, Sikkim and Tripura harbours 130 major tribal communities of the total 427 tribal communities found in India (2001 census). In general the tribes of North east India have been categorized into broad ethnic communities-khasi and the Jaintia tribes of Meghalaya who belongs to Monkhemar culture of Austric dialect and the rest of the tribal groups are Mongoloid who belong to Tibeto-Burman subfamily of Tibeto-chinese group 7.

Traditional Medicines derived from medicinal plants are used by 60% of the world population. This study focuses on Indian Herbal drugs and plants used for the treatment of diabetes, especially in India. Diabetes is an important human ailment afflicting many from various walks of life in different countries. In India it is proving to be a health problem especially in urban areas. Though there are various approaches to reduce the ill effects of Diabetes and its secondary complications, herbal formulations are preferred due to lesser side effects and low cost. A list of medicinal plants with proven antidiabetic and related beneficial effects and of herbal drugs used in treatment of Diabetes is reported.

These include Allium sativum, Eugenia jambolina, Momordica charantia, Ocium sanctum, Phyllanthus amarus, Pterocarpus marsupium,Tinospora cardifolia, Trigonella foenum graecum,Winthania somnifera, Castela emory, Ephedra sp, Krameria sp, Opuntia sp, Peniocereus greggii, Plantago sp, Verbena gooddingii, Cacalia decomposita, Stevia sp.One of the etiologic factors implicated in the development of Diabetes and its complications is the damage induced by free radicals and hence an antidiabetic compound with antioxidant properties would be beneficial. There are many medicinal plants that are used which are helpful in treatment of type 2 diabetes in the southwest. The mesquite plant (Prosopsis glandulosa) and Prpdigiosa (Brickellia grandiflora) are found to be particularly effective in the stabilization of the blood glucose 8.

The main objective of this study was to assess the diversity of ethnomedicinal plants used by villagers in Nalbari district of Assam and document the traditional medical practices followed in healing complications associated with Diabetes. Similar ethnobotanical studies have been done elsewhere to document the traditional knowledge that has been vanishing 9. Therefore, documenting indigenous knowledge is important from the view point of conservation of biological resources and their sustainable utilization in the management of Diabetes and its related complications.

Description of Study Area: Nalbari district is situated in between Kamrup and Barpeta district. The Nalbari district is situated in between 26oN and 27oN latitude and 92oE and 97oE longitude. The northern side is bounded by the Indo Bhutan international boundary and the southern side by the River Brahmaputra 10. The Darrang and the Kamrup district falls in the east and Barpeta district in west. The district covers a area of 2257 sq km consisting of 1 civil sub divisions, 11 revenue circles, 12 community development blocks, 110 Gaon Panchayats covering 827 villages.

The population of the district is 1138184 (2001 census) out of which 1100706 lives in rural areas and 27478 lives in urban areas. Thus nearly 97.59% of the population live in villages. The villages were selected on the basis of economic backwardness, dependence on medicinal plants and lack of medical facilities. Survey was conducted from June to December 2010. 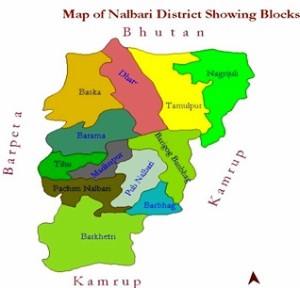 Ethnobotanical Survey: Field investigations were conducted in the following villages Namdhonga, Guakusi, Bhungkusi and Larkusi. During the study, daily activities of the local inhabitants were closely observed and interpersonal contacts were established by participating in their functions.

Plant Collection: The medicinal plants used by the villagers were collected following standard protocols and preserved using herbarium techniques. Specimen collected from the field were preserved as herbarium and then the specimen were identified by the experts in Ayurvedic college, Guwahati.

RESULTS AND DISCUSSION: Table 1 reveals the data obtained during the investigation. A total of 35 plant species belonging to 28 families have been recorded in the present study.

Plants like Aegle marmelos, Swertia chirata, Catharanthus roseus, Ocium sanctum, Murraya koeningii, Cucumis melo were more frequently used by the people in the area. The usage of plant parts Leaves: 21, Rhizome: 2, Whole plant: 2, Root: 2, Stem: 1, Fruit: 4, Bark: 2, Seed: 2. From these data it is shown that most remedies are based on fresh leaf followed by fruit then rhizome, whole plant, root, bark, seed and then stem which were less frequently used by the people of these area. M. koeingii and B. juncea have beenproven effective in the management of Diabetics and its related complications 12, 13. These plants are very effective in controlling Diabetes so much studies in this area is required.

CONCLUSION: Present investigation indicates that Nalbari district of Assam is blessed with splendid diversity of ethnomedicinal plants. The study depicts that resource persons are invariably elderly people and the younger generation is reluctant to take up the culture. Therefore, documentation of traditional knowledge is the only way out to preserve the knowledge base conserve the plant resources endemic to this area. Further, ethnomedical approach for the treatment of diabetes is a practical, cost-effective and biologically safe way to treat this dreaded disease. Moreover herbal medicine is always a better option to treat disease with comparatively lessar side effects.